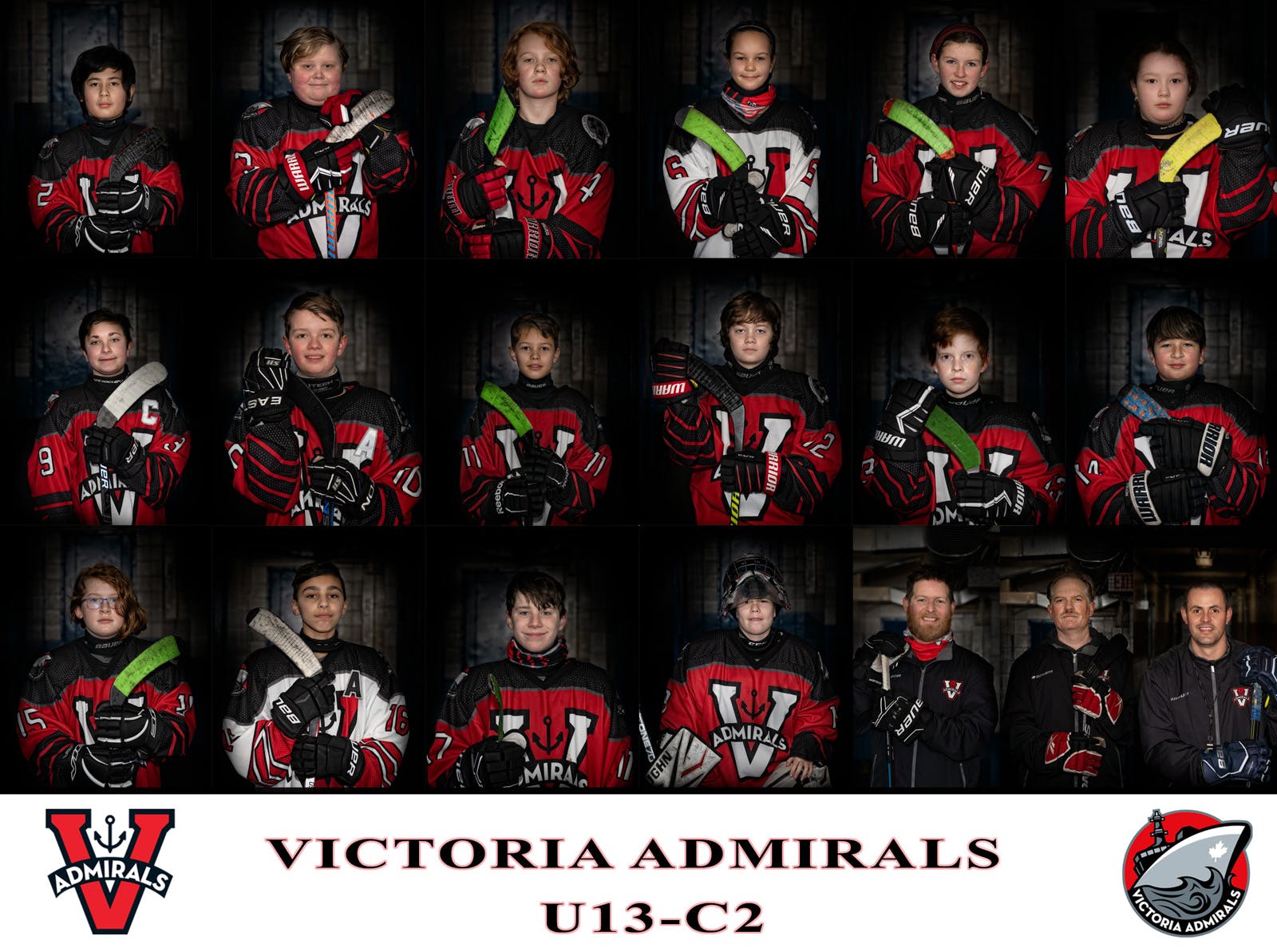 By Cory Hergott
1 year ago
The Victoria Admirals U13 C2 hockey club is currently in the running for the Chevrolet Canada Good Deeds Cup. They have earned the right to represent the province of British Columbia in the Canada-wide challenge. That’s a pretty cool feat for a group of 11-12-year-olds who really just want to help The Children’s Health Foundation of Vancouver Island with their efforts to help sick kids and their families to be able to stay closer to home during their illness.
Some of you might know my backstory, but for those who don’t, I am a cancer survivor who lives on the Sunshine Coast in BC. What that meant for me was that during my treatment, my wife had to pack me into our vehicle and take me across on the ferry five days a week for six weeks in order for me to receive my 12-minutes of radiation, only to turn around and take the ferry home again.  It made for incredibly long days for both of us.
The Children’s Health Foundation of Vancouver Island helps families of sick kids to cut back on those travels, which in turn takes some of the weight of treatments off of everybody’s shoulders. I cannot stress enough how much a program like this helps the people who find themselves in need of what it has to offer.
This is something that I think we could all get behind. The purpose of this article is not to ask for votes, but to shed some light on what some pretty great kids are doing to help their community. I think it is important to recognize when kids want to help other kids. These are values that we should all find essential and that we can all be proud of as fellow British Columbians. I’m quite sure that the team would appreciate your votes, but I will leave that up to you.
So, what happens if the Admirals do indeed win the Good Deeds Cup? I reached out to the club’s treasurer, Anna Warhurst to find out how this all came about and what is at stake for The Children’s Health Foundation of Vancouver Island should the Ads come out on top.

It’s been quite the whirlwind. It started in the beginning of January when they announced that the Good Deeds Cup was going to be happening. We had decided already this season that we were going to focus on teamwork and kindness because we knew the season was not going to be a normal one. We wanted to try to make it as fun as we could for the kids, so we did some fundraising at the beginning. Partly because I didn’t want to ask parents to pay extra fees, and so that we could maybe give the kids a Christmas gift and see what the conditions were like to maybe have a party at the end. We still don’t know if a party can happen due to COVID.
We ended up doing so well with the fundraising that we were able to give each of the kids a bit of money to allow them to make a donation to a charity of their own choice. So we handed each of them some cash and said, go make a donation and tell us what you did. Some of the kids shopped for the elderly in the Stocking Stuffers For Seniors program, we had donations for the SPCA, and we had some donations for the women’s transition house. So we had all sorts of ideas that the kids came up with.

I want to take a second to say how impressed that I am to hear about 11-12-year-old kids who are thinking about places like women’s transition houses and understanding their importance. That is some heavy stuff for kids of that age to be aware of and my hat goes off to them and to their parents who have instilled these kinds of values.

That sort of started the charity ball rolling and when the Good Deeds Cup came up, and they announced that they were going to be doing it, I decided that we needed to get on board with that because I can’t just sit and watch those things go by. Our coach Matt, (Belanger) was right on it and our team photographer Gord, (Rufh) who has done all of our work for us has been right on it as well. As a team, we can’t go do traditional fundraising like bottle drives etc, now. We can’t do those things anymore this year, we can go to practice and go home, that’s it. But we’ve been able to make practices fun and we’ve been learning more about all of this.
One of our kids did a piece on the Children’s Health Foundation for a school project, so it has really opened his eyes in terms of what he can do to help. Hockey really does focus on a lot of community stuff. There is that stigma that hockey players are very privileged, but hockey does give a lot back and we’ve been able to make the most out of a really weird year.
Our focus is to be able to help Island kids stay on the Island for their care. For parents to not have to load their kids up from Port Hardy and take them over to Children’s Hospital…to be able to have care at home on the Island is an amazing thing for this entire Island and the trickle-down, by extension is that if Island kids don’t have to go to Children’s Hospital, there will be a bed open there for another kid.
We also want to help provide these kids with equipment that will help allow them to participate in sports with the neccesary gear.
You can view the team’s pitch for the Good Deeds Cup below.
Normally we would be fundraising to raise money for tournaments, etc but we don’t have tournaments or gameplay. We don’t have to pay tournament fees this year, so it was about making it fun for the kids. We’ve been able to make something out of what could have been a bummer of a year.

I wanted to ask Anna, as not only the team’s treasurer but also as a mother of one of its players a bit about how she felt to see these young players digging into this year’s charity work, and to touch a bit more on what these hockey players did with the money that they were given to work with a charity of their own choice.

I’m pretty proud of these kids. It’s just such a neat thing to see what different ideas they came up with. It really told me a lot about them… I can’t even be in the rink right now, I can only be around my own son. It was right after the bottle drive at the start of the year when everything got shut down and I’ve had no more access to the kids since then. I don’t get to see them on a daily basis at practice the way the coaches do. So I got to learn a lot about these kids with the choices that they made for their Christmas charity with their Christmas cash that we gave to them.
It was really neat to see the different things they chose. I mean, Beacon Hill Petting Zoo was one of them, the SPCA as well. To have an 11-year-old girl pick a women’s transition house, and another 11-year-old girl picks Our Place, they run a number of shelters, transition housing, emergency programs, detox centres, and kitchens etc… it just speaks volumes about the character of these kids and what they will be able to bring forward into the world.
When the money was given to the kids, I don’t know that I expected to see the variety of things that were chosen.
As mentioned, Warhurst’s son is also on the team, so I wanted to get her perspective as a mother as far as how she feels seeing her son taking part in these initiatives.
I’m really proud of Evan. He normally wouldn’t seek this kind of thing out, but he’s been immersed in it. Just to see the light come on with him in terms of a greater understanding of what’s going on out there. He did the Stocking Stuffers for Seniors and the person had Tums and Viva Puffs on his list… how simple of a request is that? And to have enough money left from what he was given after he bought a few flavours of everything, to see him pick up a chocolate letter P and say, ‘it’s not on Pat’s list, but it’s Christmas, let’s get it’ and the thought that he put into which flavours of Tums and Viva Puffs to buy. He really did enjoy it and he gained an understanding of all of this by going through this process.

So, how does the Good Deeds Cup work?

Chevrolet Canada will give $100,000 to the charity of the winner’s choice, so in our case, The Children’s Health Foundation of Vancouver Island. By making the regional finals, we have already raised $2000 for our charity. If we make the top three at the end of voting… and this is where numbers count, it goes to $5000. After that, the top three videos are judged again based on the original five criteria, which are enthusiasm, feasibility, and three other things plus vote count.
Our photographer Gord has been absolutely amazing… every photo that you see, he’s taken. Every piece of that video, he put together. He’s done all of our videography, all of our AV. Our families have been great with participation. If I say that we are going to go crawl all over trucks and take photos, we get almost 100% participation. So our families are saying, what can we do next?  It’s challenging when we can’t meet in the lobby during practice to discuss these things. It can be challenging to rally the parents without having them in a group, but we have had great support from them and our community.
We’re not allowed any paid advertising, but local business’ have helped us get the word out on their platforms. That’s really what we need… to get the word out. I just want people to know what these kids are doing. There are some pretty cool kids all the way across Canada involved in this particular initiative that are doing some really, really neat things. We really connected with a lot of the teams before the regional finalists were announced. There was a lot of support and teamwork. Every time a new team came in with a submission it was like, hey, welcome to the party! Now we are getting all kinds of support from teams from BC and other provinces. North Van is backing us, we’ve got PoCo in our pockets, we’re getting boosts from Cranbrook and Merritt.
There are all of these kids across Canada involved in this initiative who are now becoming aware of these other things that maybe they didn’t know about previously.

Kids, who want to help other kids… is there a better initiative to get behind?
If you would like to support the team in their endeavour, you can vote for them here. There is not a lot of time left as the voting ends tomorrow on Wednesday, February 24th at midnight.
Uncategorized
Recent articles from Cory Hergott