Even if John Gibson is made available, let the buyer beware, there’s serious risk involved: Around the Pacific 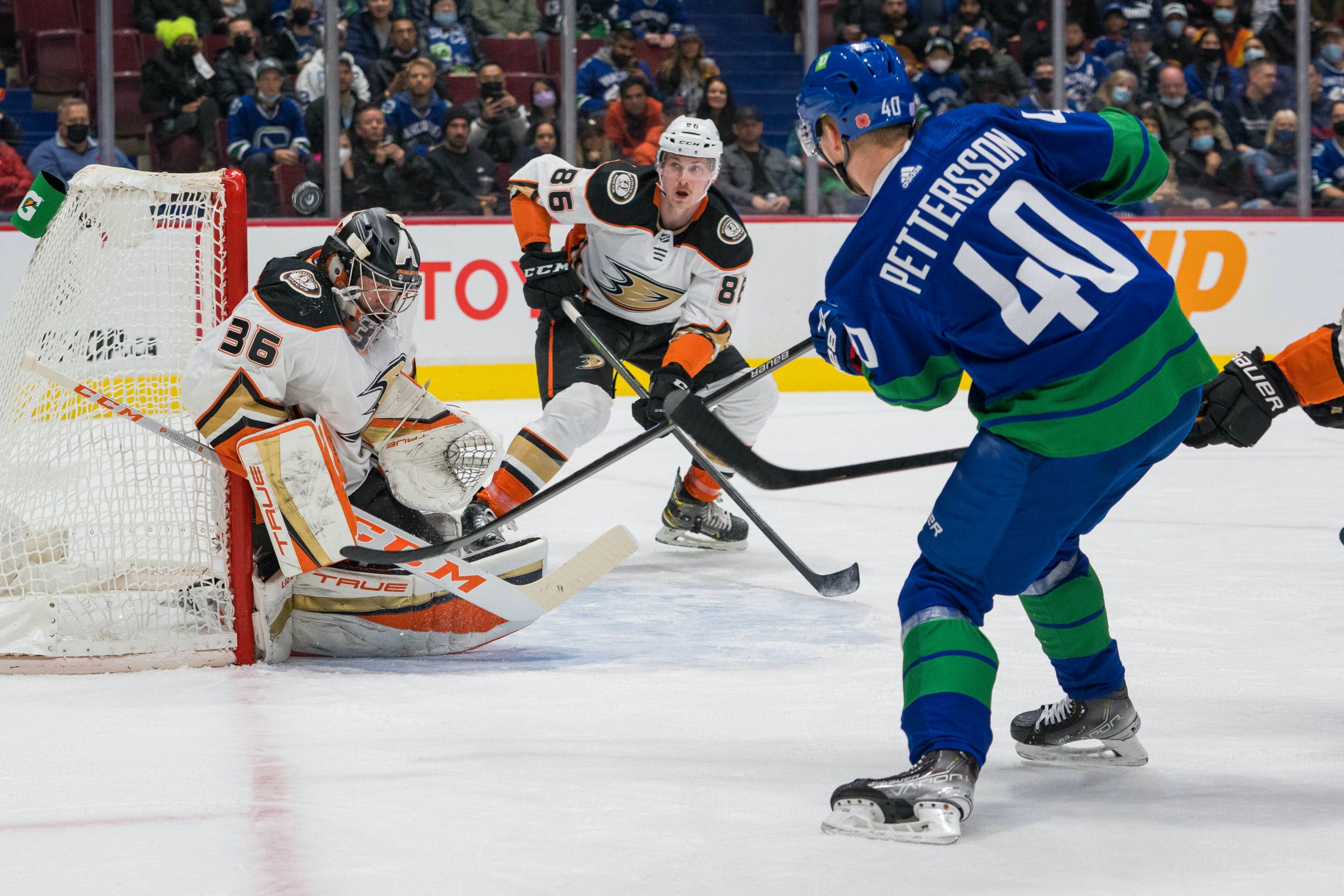 By David Quadrelli
5 months ago
Welcome back to Around the Pacific — a new series here at CanucksArmy keeping you up to date on all the happenings around the Pacific Division.
If you’re a Canucks fan, you know the joys of having a franchise goaltender.
You also know what it’s like to be on the opposite end of that spectrum, too.
For Anaheim Ducks goaltender John Gibson, his true form is probably somewhere in the middle.
After a Monday morning report from Sportsnet’s Nick Alberga claimed that Gibson was open to being traded and had even informed Anaheim of that, Twitter was set ablaze.
Almost instantly, Leafs and Oilers fans — among other NHL fanbases — were putting together their best trade packages for their club to go out and acquire Gibson.
Gibson refuted the report in a conversation with The Athletic Tuesday morning, but the Monday report was certainly enough to get some NHL clubs and their fanbases excited at the thought of acquiring him from Anaheim.
Well, dear reader, in today’s edition of Around the Division, we’re here to tell you, along with any NHL team and their fans hoping to pay an arm and a leg to acquire Gibson, to proceed with caution.

As the old adage tells us — buy low, sell high.
Any team acquiring Gibson almost certainly isn’t going to be acquiring him for cheap, and as a result, the Ducks are likely going to get a king’s ransom in return for their starting netminder, should they decide to trade him.
Therefore, the Ducks, in all likelihood, will be the only team listening to the oldest commonplace investment advice in the book.
But why should buyers beware in the first place?
Canucks fans may have a bit of a skewed vision of Gibson, since it seems like every time the Canucks play the Ducks, Gibson turns into Dominik Hasek for 60 minutes. He even recorded a shutout in his NHL debut against the — you guessed it — Vancouver Canucks.
But it’s not just Canucks fans who may have a skewed view of Gibson’s abilities.
Some absolutely stellar first years in the league have given Gibson a reputation as a franchise-level goaltender, but he hasn’t played like his old self in recent years.
In fact, he’s actually been worse than league average.
To put it into perspective, Matt Murray of the Ottawa Senators — who is a year younger than Gibson and briefly found himself in the minors this past season — performed to a higher save percentage and lower goals-against average than Gibson in 2021-22.
Would fans of other teams in need of a franchise goaltender sell off assets to take on Matt Murray? We’re daring to guess that the answer is probably not.
This past season wasn’t just a flash in the pan for Gibson either, as his .904 save percentage was actually higher than the .903 save percentage he posted in 2020-21. And the year before that, he found himself at .904 once again.
Now, there’s plenty to consider when evaluating goaltenders, and stats often don’t tell the full story.
Playing behind an at best porous defence for the past three seasons in Anaheim certainly hasn’t helped Gibson’s case, and there’s certainly a chance that at 28, he can bounce back and return to form; but the risk is just too high, especially when you take into consideration the financial commitment any Gibson trade brings along with it.

After posting a somewhat otherworldly .926 save percentage through 60 games in the 2017-18 season, Gibson cashed in on an 8-year contract with an annual average value of $6.4 million per.
Now, if Gibson kept those kinds of numbers up, that could be one of the most valuable contracts in the league, but it’s been all downhill for Gibson ever since.
In the season immediately after, he posted a .917 save percentage, which, to be fair to Gibson, is above league average and is certainly a respectable number.
But Gibson has seen his save percentage drop below .905 in each of the three seasons that followed.
Gibson currently has five seasons remaining on his contract and is a big financial commitment for any team to make.
The hope for any team acquiring Gibson is that he can bounce back in a massive way. But as we outlined above, the chances of that happening are slim at best, and almost certainly aren’t worth betting $32 million on.