Jim Benning’s final offseason as GM may have been his worst one yet, and set the Canucks back years 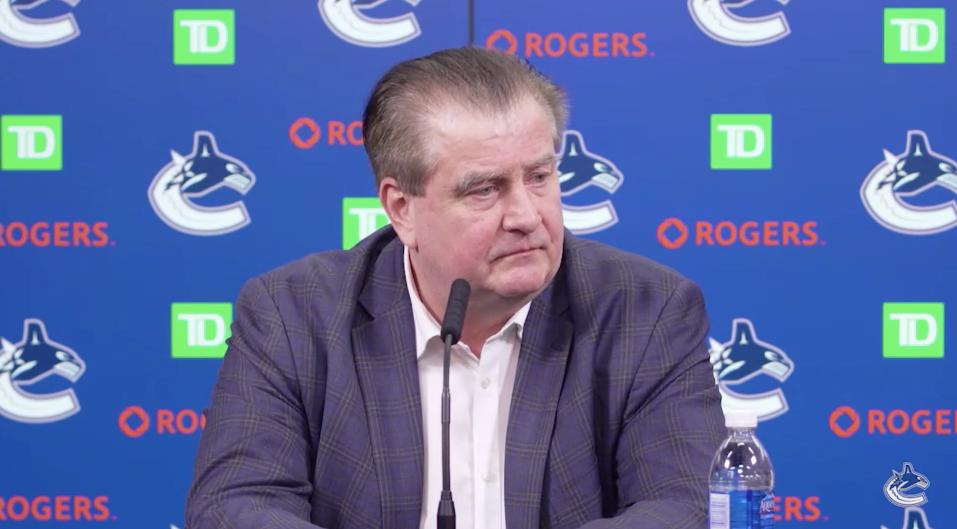 By Noah Strang
8 months ago
When Vancouver Canucks fans think back on the Jim Benning era in a decade, there are plenty of moments that might come to mind. Some are good, such as trading a first-round pick, Marek Mazanek, and a third-round pick for J.T. Miller who has blossomed into a superstar in Vancouver, but most — as evidenced by the current state of the team and their success over the years Benning was in charge — are bad.
Chief among those bad moves are the many bloated contracts that Benning handed out like candy every year in free agency.
Finding the defining lowlight of the Benning era is difficult because there are so many to choose from. You could pick the Jake Virtanen draft pick, the Tyler Myers contract, or the Tyler Toffoli trade and subsequent offseason drama among many others. The Jim Benning era is not one that will be remembered fondly in Vancouver.
Despite this long list of mistakes, Benning’s worst and most damaging offseason was this past summer. From mistakes that altered the course of the franchise to smaller errors that the new regime will have to deal with, Benning is lucky that he only had to deal with the results of this past offseason for a few months.
Despite seven years of failures and mediocrity, Benning was allowed to continue as GM following another playoff miss in the 2020-21 NHL season. This was a crucial mistake by Canucks ownership as Benning saw the writing on the wall and proceeded to make lots of short-sighted moves, ultimately setting the Canucks back many years.

Knowing that he wouldn’t be around for long if the Canucks weren’t playoff contenders, Benning pulled the trigger on a massive trade that sacrificed future assets for short-term help. The Canucks traded Antoine Roussel, Jay Beagle, Loui Eriksson, a first-round pick, a second-round pick, and a seventh-round pick for Conor Garland and Oliver Ekman-Larsson.
Roussel, Beagle, and Eriksson were all Benning signings from previous offseasons that had backfired badly. They were some of the main culprits as to why the Canucks couldn’t find the cap space to surround their young talent with competent forward help, but all had just one year left on their contract. The Canucks had suffered through the worst years of those contracts and would have had cap relief after this season if they hadn’t done this trade.
They were so close to reaching the light at the end of the tunnel, but then they weren’t.
In return, the Canucks received Oliver Ekman-Larsson and Conor Garland. While there was some excitement about these players coming into the organization, much of that has subsided after their performance this year. Ekman-Larsson’s play has fallen off a cliff in the second half of the season and he still has five years left on his contract after this one at a cap hit of over $7 million. Garland started well and has strong play-driving numbers at a good contract, but he hasn’t scored in 17 straight games.
This all isn’t even mentioning the draft picks that the Canucks surrendered in this trade. The Coyotes used the first-round pick they got to select sniper Dylan Guenther who has been all over highlight reels showing off his skills. The Canucks also gave up two other draft picks, important assets for a team that isn’t close to contending for the Stanley Cup.

The smaller moves that result in big issues

While the trade with the Coyotes could be enough to designate this past offseason as the worst in the Benning era, there was also a flurry of smaller moves that haven’t worked out. While none of these signings and trades are enough on their own to cause an uproar, when viewed as a holistic piece of work, it’s an ugly picture. This has left many small fires for Patrik Allvin and the new management group to extinguish.
One of those was the re-signing of Travis Hamonic to a 2-year / $6 million contract. While Allvin was able to trade Hamonic at this year’s deadline for a draft pick, the fact that the Canucks fleeced the Ottawa Senators doesn’t make this a good contract. That wasn’t the only poor signing of the offseason, as Tucker Poolman was inexplicably signed to a four-year contract, a ridiculous amount of term for a depth piece.
Last but not least, the Canucks made a splash when they traded a third-round pick for Jason Dickinson from the Dallas Stars, taking advantage of the expansion draft rules. While Dickinson has been a massive failure and it would be easy to dunk on this move, at the time it was simply impossible to tell how poorly he would fit with this group. Still, it’s worth mentioning that another one of Benning’s moves resulted in a complete disaster.

After more than seven years of work and trading away high draft picks and valuable prospects, Benning was able to produce a team that is falling well short of the playoffs. Not only are they not a Stanley Cup contender, but they also cannot even finish in the top half of the league. Not only is the team bad, but the future is also looking bleak since the prospect pipeline is dry, forcing Allvin to get creative to improve this team.
This roster is fully maxed out against the cap, lacking draft picks, and doesn’t have many exciting prospects that haven’t graduated to the NHL. It’s a very sad picture for the Canucks and the only silver lining is the nucleus of young talent on the NHL roster as well as the new management group that has a strong history of creating successful environments. This has left a difficult situation for the new regime.
“We don’t have the superstar. We’re not a contender right now,” said Allvin to The Province recently. “So every single player has something to prove to us. And that’s going to be the mindset going forward.”

The ramifications on the future of the franchise

Last offseason was one of the most crucial for the Canucks franchise in a long time as it altered the trajectory of the team. Instead of having an impressive collection of young players and cap space in this upcoming offseason to build around them, they now have more long-term cap commitments that are going to make improving difficult. When you consider that they gave up draft picks to get to this situation, it only makes the moves look that much worse.
Benning’s final offseason was a parting gift to the franchise and the cherry on top of a disastrous era. When the organization just needed to wait one more year until they got cap relief, he sold the future for one last heave at the playoffs, a risk that backfired quickly. In a hard cap league, salary cap space is an asset just as important as prospects and draft picks, yet Benning failed to recognize that crucial fact.
Now it’s up to Patrik Allvin to make something of the rubble that is left over. There are still exciting players on the roster with the potential to be among the best at their position in the league, franchise cornerstones that any GM would love to have on the roster. He’s going to have a big challenge ahead of him, but no matter what happens, it’s unlikely that he will ever have an offseason as damaging to the organization as Benning did last summer.
More from CanucksArmy:
Uncategorized
Recent articles from Noah Strang