Canucks prospect Jacob Truscott stayed silent but strong at the World Juniors, but where does he go from here? 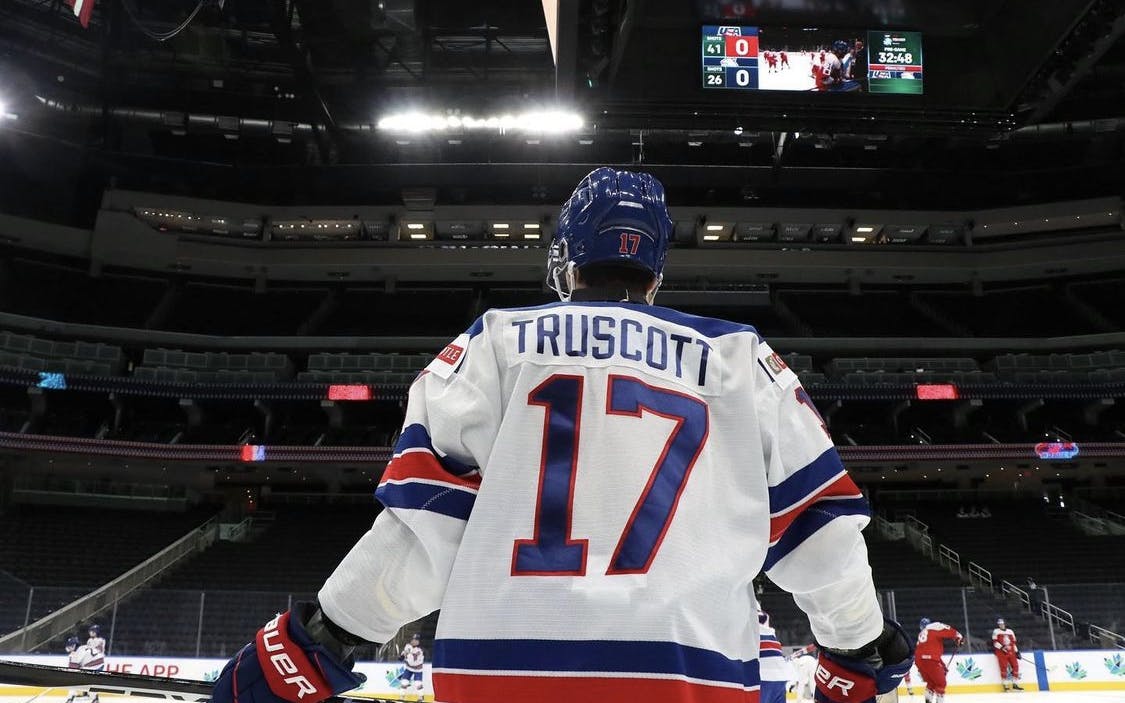 By Faber
3 months ago
Now that the 2022 World Junior Championship is in the rearview mirror, we have had some time to go through and watch all the games once again and evaluate each of the Canucks’ three attendees at the best U20 hockey tournament of the year.
Every pass, hit, shot and slip-up has been seen and we are going to discuss what we liked and disliked from the three Canucks prospects at the WJC.
Batting in the leadoff spot is the quiet left-shot defenceman, Jacob Truscott. We liked the way that Truscott played in this tournament. A fifth-round pick cracking USA’s roster was a win on its own for the Canucks’ 2020 draft pick.
For the record, Truscott stands at 6’1″ and weighs around 180 lbs. He is 20 years old and is a left-shot defenceman.

Let’s begin by discussing what stuck out the most for Truscott at this tournament.
Nothing.
Yes, nothing stuck out in Truscott’s game. And for a defenceman who was asked to play a defensively sound game as the secondary puck-mover of his pairings, he did an excellent job. Truscott spent most of the tournament alongside Chicago Blackhawks prospect Wyatt Kaiser — who finished the tournament with two goals in five games. Truscott also saw time with his partner from Michigan, Luke Hughes.
When playing with Kaiser, Truscott played his off-side as a right-side defenceman. With Hughes, Truscott moved back to his natural left-side to be in a very defensive role and allow Hughes to play as more of a rover defenceman.
Truscott was simply able to be a good soldier for the USA. He blocked shots, cleared out the crease, and made all the simple plays. There’s not much pizzazz to his game but he simply went out there, skated for 15 minutes or so a night, and was a trusted defensive defenceman.

Something that we have talked to Truscott about in the past is him working on being a better puck-mover and finding ways to contribute more offensively. Though he wasn’t the primary puck-mover on any of his pairings, this gave him more space when Hughes or Kaiser got into trouble and more often than not, Truscott was able to make a smart decision with his breakout passes.
The biggest thing we liked about his breakout passes wasn’t the quantity of them but more the quality and how he doesn’t need a lot of time to think before he releases the puck. Truscott is a smart defenceman who seems to have the ability to know where bodies are on the ice at all times. You can consistently see him evaluating the ice when his partner has the puck, which helps him prepare for when the primary puck-mover needs to rely on him to break the puck out of the defensive zone.
We were also pleasantly surprised by his physicality. Truscott doesn’t like the opposition being around his goaltender and seemed to be one of the most aggressive USA players between and after the whistles. He used his size in the corners and though he isn’t necessarily large in terms of a defenceman, at 6’1″, he isn’t small either.
The biggest positive takeaway was simply how he plays the game for the betterment of the team. It’s not about what Truscott can do for himself, it’s about what he needs to do for the team to have success. We hope to see a lot of the same when he reports to Michigan this fall and pairs up with Luke Hughes.

There wasn’t much offence from Truscott as he was held without a point in his five WJC games. He did attempt a lot of shots but struggled to get them on net due to a lack of accuracy or having his shot blocked. We counted 14 shot attempts for Truscott over five games while only seven of them actually made it on net.
This, along with the below-average skating that Truscott showcased were the two negatives that we took away. We don’t think that his skating will look that bad in the NCAA but if he was to make the jump to the AHL after this coming college season, we would be a bit worried about how he can adjust to the speed of pro hockey.

It was nice to see Truscott participate in this tournament and we really like the way that he plays the role of a defensive defenceman. He will continue to gain experience in that role this fall when he plays with Hughes at Michigan and though there will be a lot of turnover at Michigan after this coming season, two more years of developing in the NCAA seems like the right path for Truscott.
We want to see him continue to get stronger, as that will be a massive requirement for him to play his style of game in the pros. Another thing is his fluidity when skating, it just feels a little bit robotic when he is skating up the ice with the puck and if he could add another half-step to his game, we really believe he should be able to at least be an AHLer after two more years of hockey at Michigan.
Playing in the World Juniors is a big win for any player and playing for a top-team like the USA as a fifth-round pick shows impressive development since being drafted. We’ve got our eyes on Truscott and hope to see him level up as a defensive defenceman that is a crucial supporting piece for your defence core that every team needs to have.
Content
Recent articles from Faber