Is there cause to be concerned about the leak in the Canucks’ prospect pipeline? 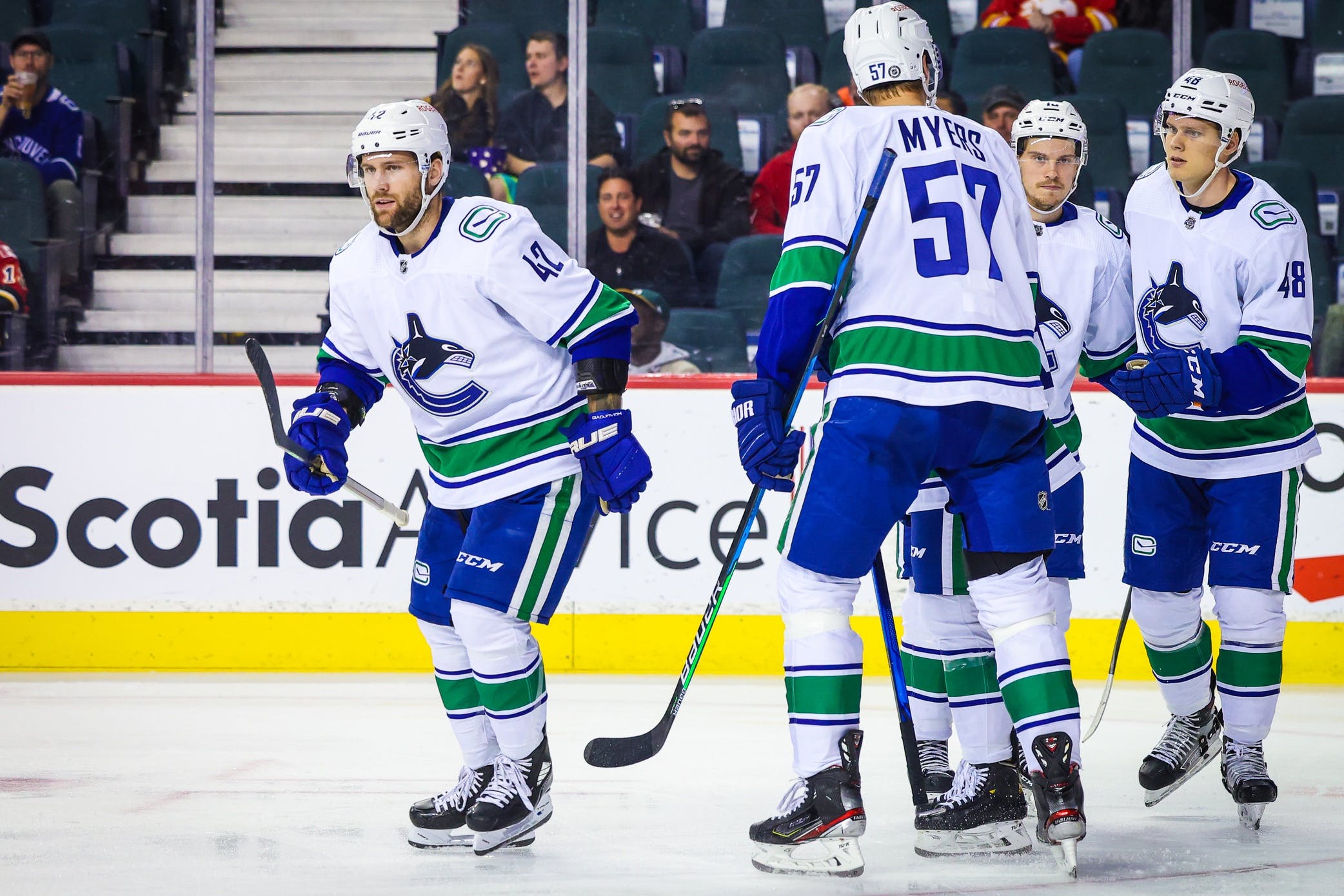 By Stephan Roget
1 year ago
We’re not going to get too many sentences into this without addressing the elephant-sized power forward in the room.
Yes, this article is about the loss of Jonah Gadjovich to waivers, and more specifically to the San Jose Sharks.
But it’s also about a lot more than that.
Gadjovich, who ranked eighth in our preseason sorting of the Vancouver prospect cupboard, is just the latest in a medium-length line of reasonably talented prospects to exit the system. There’s plenty of room to quibble about Gadjovich’s exact worth as a future NHL player, but the fact of the matter is that he was one of the best young assets the Canucks had on hand, and now he’s gone.
Same goes for Kole Lind, though the Canucks could have got him back for free on waivers the same day Gadjovich was claimed. In 2020, we ranked Lind as the team’s seventh-best prospect.
That same list featured Brogan Rafferty at number six. He got in one game with the Canucks in 2021, sat on the taxi squad for the rest of the season, and very understandably departed as a UFA at the end of the year.
Don’t even get us started on trading Tyler Madden — 2019’s eighth-ranked prospect —  for Tyler Toffoli and then letting Toffoli walk as a free agent.
We’re not here to argue that these lost players are guaranteed to burn Vancouver in the years to come, or that they’re going to start looking an awful lot like Cam Neely anytime soon. Lind and Rafferty both cleared waivers this week, a pretty clear statement about what the rest of the league thinks of former highly-touted Vancouver hopefuls. Madden is still struggling to crack the Los Angeles lineup. It wouldn’t be entirely surprising to see Gadjovich back on waivers again sometime this season.
But the cupboards looked a little bare before these folks departed. Now it’s starting to look downright barren. The leaks in the prospect pipeline have made it all the more obvious that it’s running dry.
Jim Benning’s propensity for dealing draft picks is well-documented by now, and the result has long been a dearth of prospects. And yet, where many contended that such a strategy was bad news for the rebuild, Benning managed to get by on the strength of (most of) his first round selections, along with some key finds in later rounds.
It’s been a quality over quantity sort of thing for Benning, but that only works to a certain point. The time when a steadier stream of young talent will be required is coming soon, and the stream is barely trickling. Talk about your false creeks…
Thatcher Demko, Brock Boeser, Elias Pettersson, and Quinn Hughes comprise the core of the franchise. Nils Höglander, Jack Rathbone, and Vasily Podkolzin have now graduated to the next level. Everything looks hunky-dory for the moment, but there’s no one waiting in the wings right now, and there needs to be.
Two drafts in a row without a first round pick have undoubtedly hurt the system. A glance at the 2021 CanucksArmy prospect rankings will reveal Podkolzin and Rathbone, and then maybe two or three other players who look to be good bets to make a long-term impact. You’ve got Danila Klimovich, Mike DiPietro, and then maybe someone else like Jett Woo or Will Lockwood.
It’s not enough.
In a sense, this is all a consequence of the team trying to transition into a competitive window. That’s why the first rounders were dealt, along with several other picks, and that’s why Madden was dealt. It’s why enough depth veterans were signed so as not to leave room for Gadjovich on the roster this season.
But having a constant influx of young, cheap talent is also a requirement of spending time in a competitive window, and that harsh truth is going to become increasingly apparent in Vancouver.
Boeser needs a new contract after this season. In 2023, it’s JT Miller and Bo Horvat. Then, in 2024, it’s Pettersson: Round Two. If all those players are playing well enough and the Canucks are winning enough to necessitate big contract extensions, that’s definitely a good problem to have.
But it’s still a problem, and it’s a problem that can only really be resolved by fleshing out the rest of the roster with hungry talent on ELCs.
True contenders stay contending by locking up their core and then supplementing them by a rotating cast of emerging stars. When the supporting crew becomes too expensive, they’re refurbished with new rookies.
As of today, the Canucks do not look set up to start this cycle.
They’re probably good for a year or two, as Höglander, Rathbone, and Podkolzin play through their own ELCs. But the Canucks hope to be in the running for real playoff success right now and for the next half-decade, at least, and that’s going to take some stockpiling of the prospect cupboard.
All of which, to bring us back to our inciting incident, makes it especially important to hang on to the few bright spots they do have in the system.
The Canucks can either plug the leaks in the pipeline, stop being so liberal with the draft pick sweeteners, and — if at all possible — acquire some additional future assets, or they can suffer the ramifications of short-sightedness down the road when the stakes have (hopefully) risen.
And neither option is off the table quite yet.
Uncategorized
Recent articles from Stephan Roget