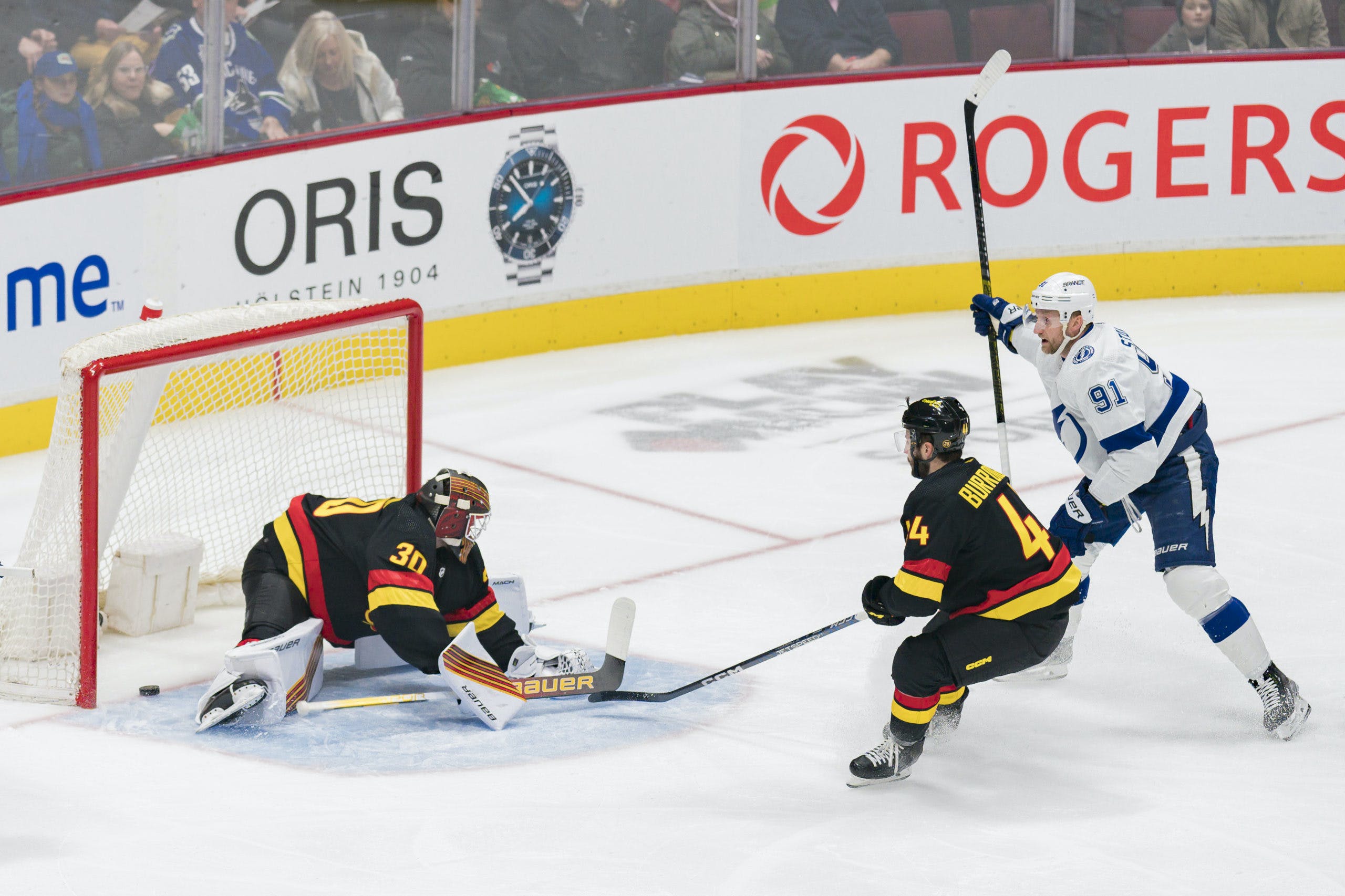 By David Quadrelli
11 days ago
Welcome to Instant Reaction — the series here at CanucksArmy where we give you our instant reaction to the game and ask our readers to do the same in the comments section below. The Stanchies are being written by Cody Severtson and will be posted later tonight. The Statsies — CanucksArmy’s analytics-based post game report by Mike Liu — will be posted tomorrow.
You just knew that Steven Stamkos was going to get his 500th tonight. The Tampa Bay Lightning forward had been sitting at 499 since he last played the Canucks. And tonight, he had a hat trick.
I’m sure you’re going to see plenty of Gifs of the lack of coverage on each of Stamkos’ goals in the Stanchies, but we’ll tell you now, it wasn’t pretty. All in all, Stamkos scored goal number 499, 500, 501, and 502 of his career against the Canucks. And after goal 500, the Rogers Arena faithful gave Stamkos a standing ovation and made their respect and admiration for one of the best players of this generation well-known.
On the Canucks side, Quinn Hughes scored a goal and an assist as part of a great individual performance for the Canucks’ top defenceman, who logged 26:49 of ice time. The next highest minute muncher on the Canucks’ blue line was Oliver Ekman-Larsson, who had just a hair over 20 minutes of ice time.
Ultimately, this game was over by the time the first period was over, and the Canucks only have themselves to blame for it. To their credit, they at least battled back and made it somewhat interesting in the third — keeping the early boo birds somewhat at bay. And that’s about all the energy we’re going to give in talking about the game itself tonight.
Tonight, there were boos, sell the team chants, but most importantly, there were “Gino” chants.
And that last chant is what really matters tonight. The Canucks paid tribute to Gino Odjick before the game and played this tribute video in-arena that we’d encourage you to watch if you haven’t already. And even if you have, it doesn’t hurt to watch it again.
Ahead of their matchup with the Pittsburgh Penguins, the Ottawa Senators held a moment of silence as well tonight, as teams around the league continue to pay their respects to Odjick.
In Vancouver, Ron Delorme, along with Trevor Linden, Stan Smyl, Kirk McLean, and more of Gino’s former teammates took to the ice prior to puck drop wearing Gino’s number 29. It was a heartfelt tribute, and it’s a shame that the Canucks ultimately weren’t able to get the win for Gino tonight.
What’s your instant reaction to tonight’s game? Let us know in the comments section below!
Editorials
Recent articles from David Quadrelli