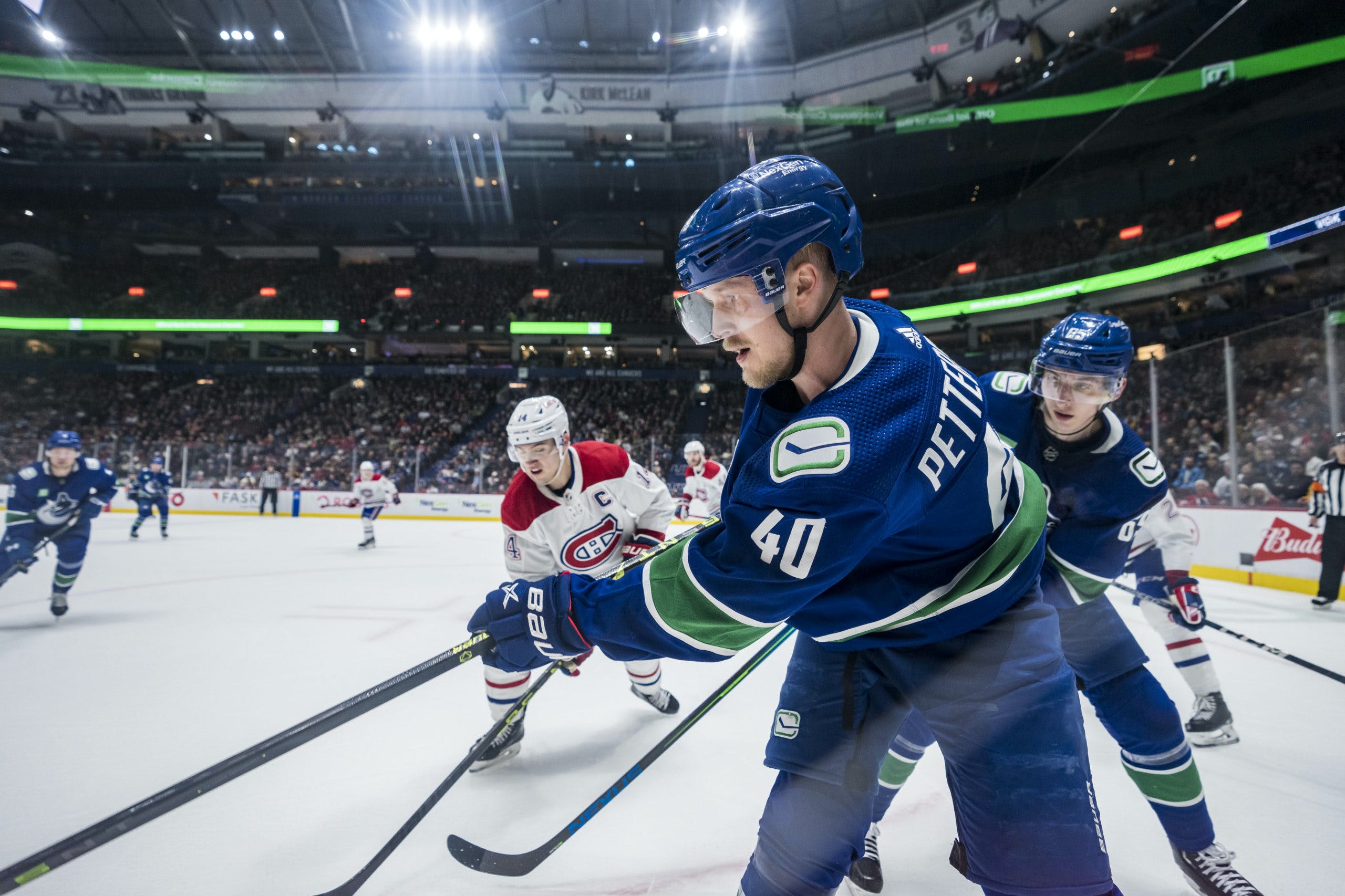 By David Quadrelli
1 month ago
Welcome back to Instant Reaction — the series at CanucksArmy where we give our instant reaction to the game and ask our readers to give theirs in the comments section below! The Stanchies by Wyatt Arndt will be posted tomorrow morning by 7 AM. The Statsies — CanucksArmy’s analytics-based post game report — will be posted later tomorrow morning.
It was sweet revenge, four years in the making.
Well, not quite, but this was certainly my instant reaction after watching this game.
Yes, Elias Pettersson stole the puck off Mike Matheson — the same Mike Matheson who concussed Pettersson by slamming him to the ice early in his rookie season — and wasted little time in sealing the deal for the Canucks.
But this game wasn’t all good.
In fact, it was shaping up to be one of the Canucks’ worst of the season.
The Canucks’ first period was really interesting. Well, that’s one word for it.
There were a lot more that come to mind, but we can’t publish most of them.
After appearing as though they were firmly in the driver’s seat — the Canucks generated nine shots before the Habs even recorded one — everything fell apart.
The Canucks came out firing early on, but Sam Montembeault shut the door early on some truly five-alarm chances. After the Habs’ goaltender swung the momentum in the other direction, it appeared as though the Canucks simply decided this wasn’t their night and gave up.
Montreal scored four unanswered goals, leading to Spencer Martin getting pulled for the first time this season. Collin Delia, who’s rocking an .884 save percentage and a 5-3 record in the AHL this season, entered the game in relief.
And then the Canucks actually turned it around.
But they didn’t turn it around in commanding fashion, and make it clear to everyone that there was just no way they were losing this game.
No, the Canucks won this game, but only after they tied it and took the lead with five unanswered goals, only to give up two goals in the final five minutes to give the Habs a 6-5 lead with three minutes remaining.
Oh, and the second goal was an unlucky bounce that resulted in an own goal for Quinn Hughes.
This team, man.
A late power play opportunity allowed Andrei Kuzmenko to get to work at the net front and tie this one back up. And as we said in the opener, Elias Pettersson got his revenge on Matheson by sealing this one with his 13th goal of the year.
Oh, and Bo Horvat scored the 20th goal of his season tonight, because of course he did.
That’s 20 goals in 26 games so far this year for Bogilny, who you’ll certainly read lots more about in The Stanchies tomorrow morning.
But before that, we want to hear from you! We gave you our instant reaction, and now we want to hear yours! Sound off in the comments section below!
Editorials
Recent articles from David Quadrelli