Instant Reaction: Elias Pettersson does his dekes to salvage Canucks road trip with win vs. Hurricanes 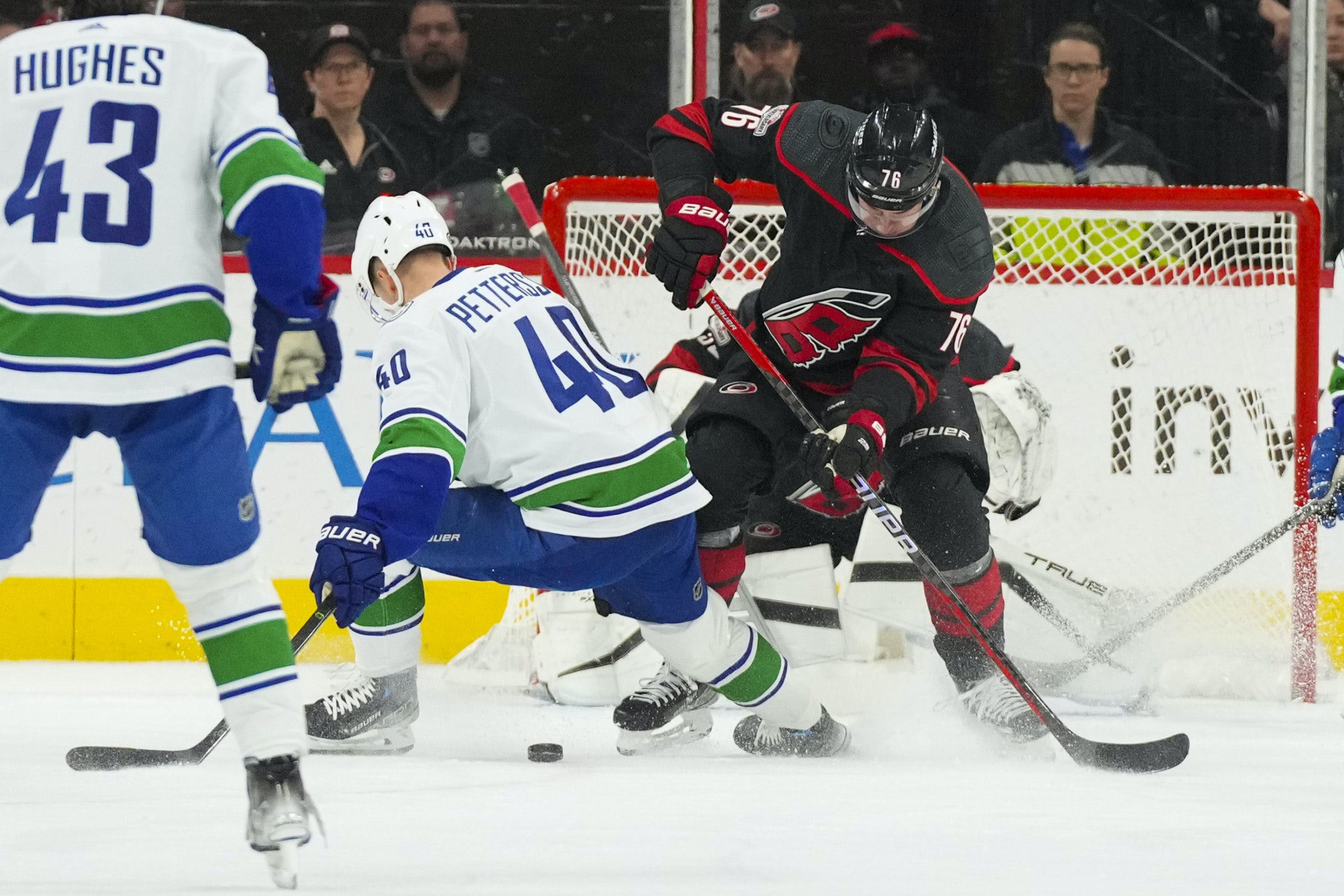 By David Quadrelli
15 days ago
Welcome back to Instant Reaction — the column here at CanucksArmy in which we give our instant reaction to the game and ask our readers to do the same in the comment section below! Cody Severtson is writing The Stanchies tonight and those will be posted later tonight. The Statsies — CanucksArmy’s analytics-based post game report by Mike Liu — will be posted tomorrow morning.
You know, this team has been trying hard lately.
Ever since they were criticized by head coach Bruce Boudreau for not blocking shots after another listless effort in which they failed to block shots and went down quietly, they’ve expelled most of those criticisms with their play on this road trip.
And sure, they didn’t get a single win on the trip prior to tonight’s game, but the effort has been there during these close losses.
Which is why it came as no surprise that the team managed to storm back after falling down by a couple of goals early on. This team is still battling.
They’re not battling in the standings so much, but they’re trying their best. The roster is just not quite good enough to hang with the best teams in the league, as evidenced by this road trip where the effort has certainly been there. This isn’t to say everything’s fine, but it is nice to see the players rewarded for their efforts on this road trip.
Our instant reaction tonight is easy. Elias Pettersson is this team’s best player, and has been their best player all season long. When the team needed a hero to close this one out in the shootout, they turned to Pettersson, and as he lined up at centre ice, fans everywhere knew what he had in store.
It will never not be somewhat mesmerizing to see Pettersson pull off the Forsberg with such ease.
And yeah, as someone who’s very firmly on team tank this season, I completely understand that picking up wins isn’t ideal for this team and their draft lottery positioning.
But tonight, the Canucks played in a game that they should be proud of, and one that their fans actually got the chance to enjoy.
In the grand scheme of things, does this win meaning anything? No, probably not. But it’s still nice to see a win every once in a while, especially when the team’s players quite clearly know the roster isn’t good enough but are still giving it their all anyway.
No negativity tonight, positive vibes only.
What’s your instant reaction tonight? Let us know in the comments section below!
But before that, you probably heard by now that Canucks legend Gino Odjick has passed away. Gino was loved by many in the community and plenty of fans young and old have some sort of memory of meeting or getting a chance to watch Gino. Drop those stories in the comments section below as well if you feel inclined to do so.
We’ll be publishing a 1400+ word essay on Gino’s impact and legacy tomorrow morning at 7 AM.
Rest in peace Gino.
Editorials
Recent articles from David Quadrelli