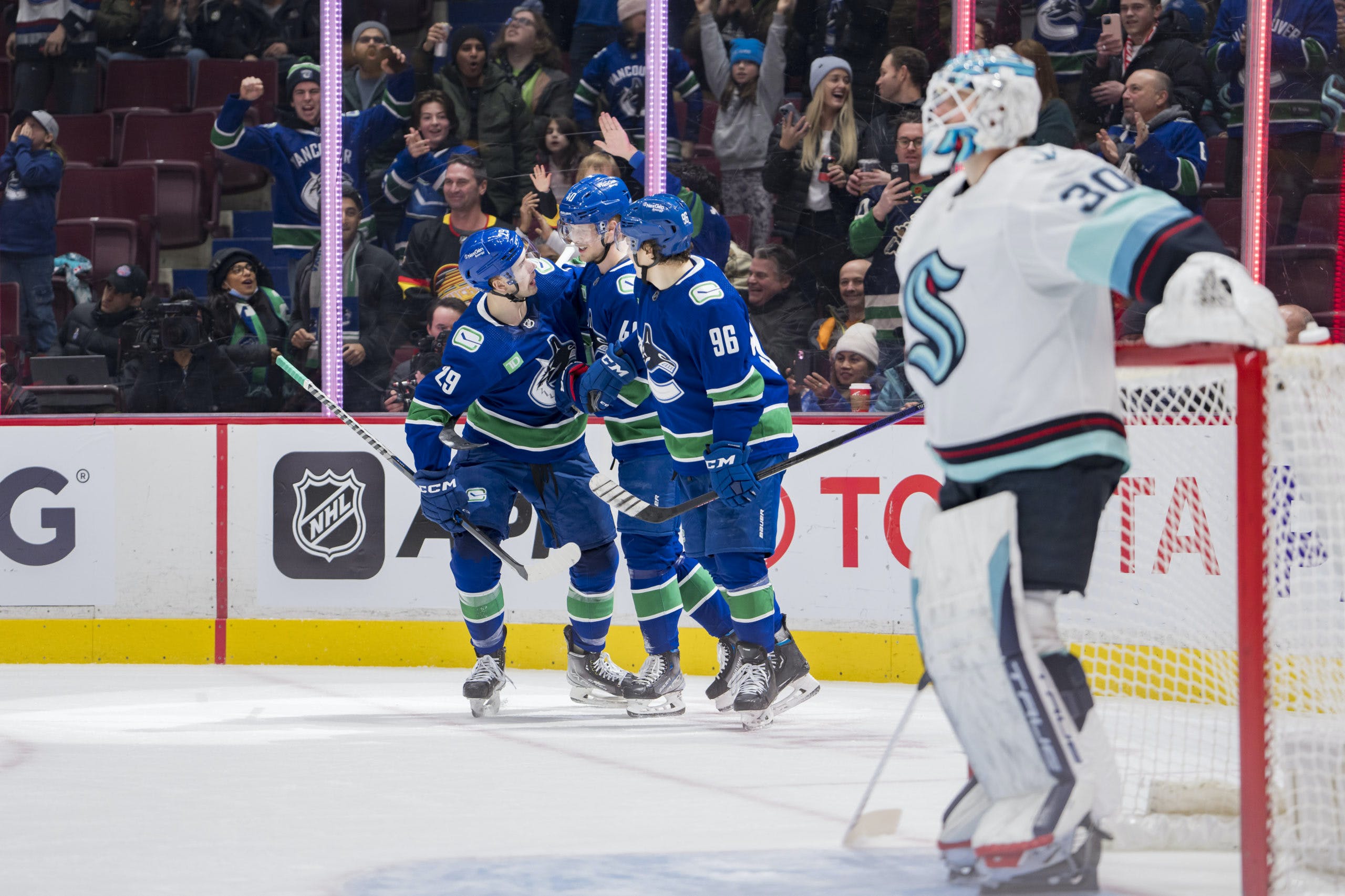 By David Quadrelli
1 month ago
Welcome back to Instant Reaction — the series at CanucksArmy where we give our instant reaction to the game and ask our readers to give theirs in the comments section below! The Stanchies by Wyatt Arndt, will be posted later tonight. The Statsies — CanucksArmy’s analytics-based post game report — will be posted later tomorrow.
Before today, Elias Pettersson hadn’t skated in six days as he rested at home nursing an illness.
After just a morning skate and being called a game-time decision by head coach Bruce Boudreau this morning, Pettersson came in to tonight’s game and singlehandedly refused to let the Canucks get embarrassed at home for a third straight game.
And yes, we quite literally mean singlehandedly.
Let’s get into our instant reaction to tonight’s game.
Theoretically, this game would have been just 1-0 for the Kraken heading into the second period.
But because of some quick thinking and his usual poise with the puck, Pettersson made his presence felt right away, and was instrumental in the Canucks tying up this game 1-1 after setting up Lane Pederson with a beautiful saucer pass in front.
And hey, usually it’d be silly to say with certainty that the Canucks wouldn’t have scored a goal to tie this one up in the first if Pettersson wasn’t in the lineup.
But based on the results the Canucks have yielded in their last couple of home games, we’re confident in saying that this goal simply doesn’t happen if Pettersson isn’t in the lineup.
And the Canucks’ second goal? Also the result of Pettersson being on the ice, only this one went right off his stick.
Before this goal, the Kraken had made it 3-1 early in the second, as Canucks fans everywhere started to prepare themselves for another 5-1 shellacking at home.
But Pettersson had other ideas. The Canucks’ second goal came off of Pettersson’s stick. His first goal of the night, and his second point of the night.
And the Canucks’ third goal? More of the same from Pettersson. This time, Pettersson and Lane Pederson pulled off a pretty passing play to set up Andrei Kuzmenko.
The Kraken answered shortly thereafter, making it 5-3 in the third. Then the Canucks got a power play, and Elias Pettersson set up his pal Brock Boeser to pull the Canucks within one.
After that, the Canucks pulled Spencer Martin late, and with the extra attacker on the ice, Pettersson, like the human silver lining he is, hammers home a one-timer to tie the game up. Bedlam at Rogers Arena, and off to overtime on the back of what was already the best individual performance from a Canuck since *checks notes* Elias Pettersson a while back.
It was absolute anarchy in overtime, with Pettersson looking like the most confident player to ever put on a pair of skates and creating space for himself out of nowhere before ringing a shot off the crossbar. Immediately after, Quinn Hughes gathered the puck in the high slot and hit the post.
As John Shorthouse said, this sequence was “insane”. And you already know you’re going to see about seven GIFS in The Stanchies dedicated just to this sequence.
Wyatt even teased it on Twitter:
And in the shootout, the Canucks had a chance to win if — you guessed it — Elias Pettersson could score in the third round.
And yeah, he did.
That’s five points on the night, plus the shootout winner to secure the two points for his team.
Simply put, Pettersson made the Canucks watchable tonight. This was undeniably the best game of Pettersson’s career, and to do this on a night when there were questions this morning about whether or not he’d even be able to play due to the time he missed — I genuinely don’t have any words.
If this game doesn’t make management certain that they should be building this team around Pettersson, I’ve no idea what will.
That’s my instant reaction to this game, but let’s hear yours! You know the drill. It’s time for you, the reader, to sound off in the comment section below!
Editorials
Recent articles from David Quadrelli