The Hughes-Bear pairing has been dynamite for the Canucks, but leaves them with precious few good options elsewhere on the blueline 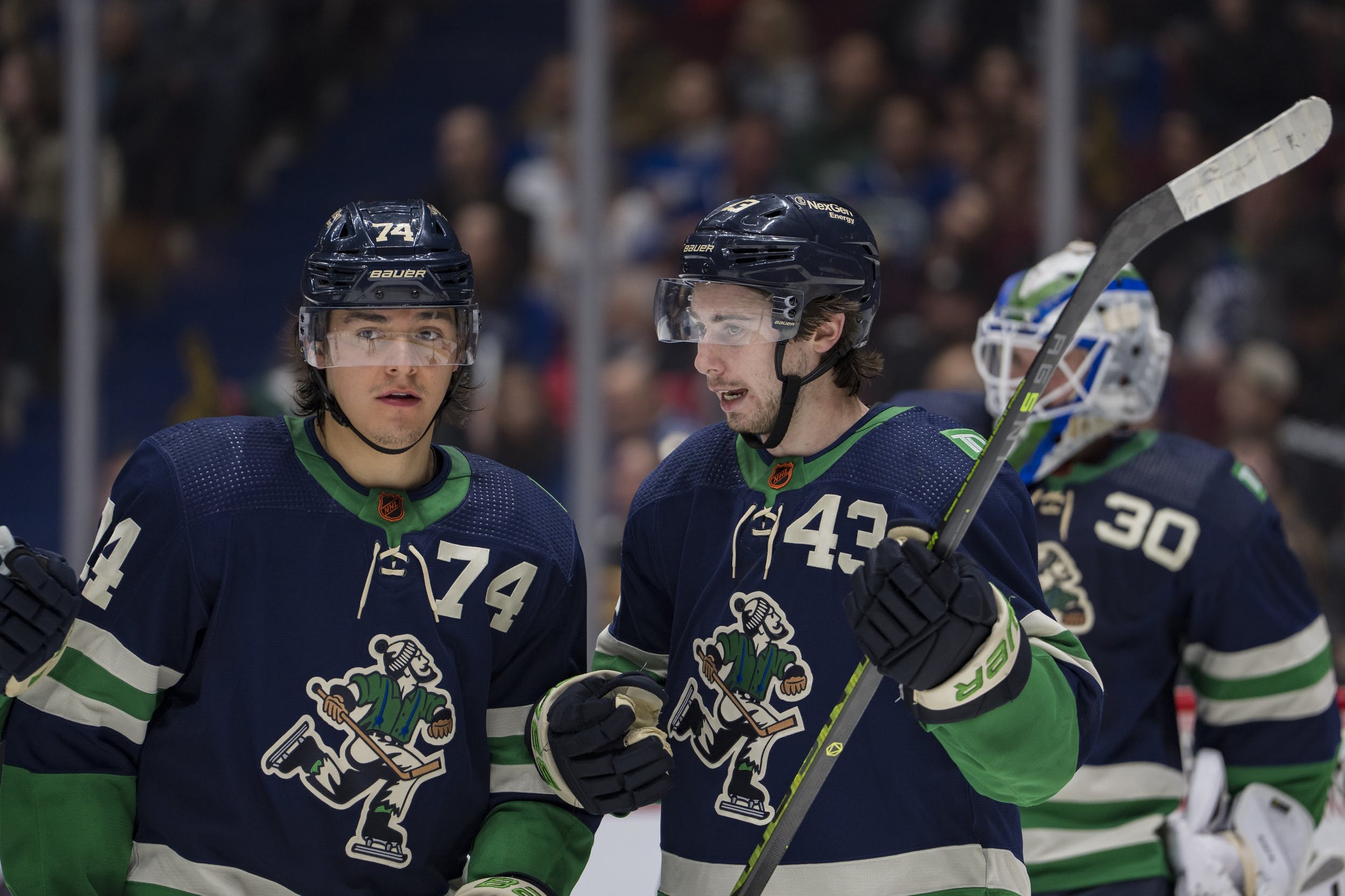 By Stephan Roget
21 days ago
From the moment that Ethan Bear’s name started being thrown around as a potential acquisition for the Vancouver Canucks earlier this past offseason, there were folks interested in seeing how he would do as Quinn Hughes’ defence partner.
For some, it was the chance to nickname the pairing “Huggy Bear.” Others found it amusing that there might be both a pairing named “Hughes-Bear” and an actual player named “Bear Hughes” — a Washington Capitals prospect — around the league at the same time.
And a handful of people genuinely thought that Hughes and Bear might make a quality partnership on the Vancouver blueline. Those people appear to have been right.
Although Bear was acquired midway through the season and not consistently paired with Hughes until sometime thereafter, the two have already played the fourth-most minutes together of any Canucks pairing at even-strength with 154:55, as of this writing.
During that time, the results speak for themselves.

From NaturalStatTrick.com
Hughes and Bear have been on the ice for eight even-strength goals for and only four against. That’s a nice ratio by any measure, but it also represents the lowest goals-against-per-minute rate of any Canucks pairing that has played significant time together.
Hughes/Bear’s collective Corsi rating of 58.40% is also head and shoulders above the rest of the team, with Hughes and Tyler Myers being the only other pairing with a positive Corsi after 60 minutes or more together.
Hughes/Bear are also tops when it comes to their percentage of expected goals at 52.99%. Only Myers and Burroughs are even close.
But it is in the control of scoring chances that Hughes and Bear truly dominate. While on the ice, they produce even-strength scoring chances at a rate of 61.34% over their opponents. No other Canucks pairing (that has played more than 60 minutes together at even-strength) even cracks 50%.
And it’s not as if those results are being achieved in soft minutes. The Hughes/Bear pairing isn’t exactly being used in a shutdown role, but Bear’s overall difficulty of deployment is right around league average, and Hughes’ is slightly above.
Really, there’s very little not to like about the Hughes/Bear pairing and the success they have achieved together.
The only problem is how few quality options the Canucks are left with outside of the duo.
For the time being, it seems that the Canucks have settled into two other semi-consistent pairings: Travis Dermott with Luke Schenn, and Oliver Ekman-Larsson with Tyler Myers.
It’s a little too early in the game to say much about Dermott and Schenn, though results have not been encouraging. And “not encouraging” would be about the best that anyone could say about the OEL-Myers pairing.
Taking a look at that same chart we posted above, it doesn’t take long to figure out who’s at the bottom of every category. In nearly 300 EV minutes together, OEL-Myers have a team-worst Corsi of 39.70%, an xG% of 44.86, and a scant 40% control of high-danger scoring chances.
Those who watch the games won’t argue with those numbers. If anything, those numbers are a little bit less disastrous than the eye test suggests they should be.
By any rational measure, the OEL-Myers pairing is the Canucks’ worst, and should be avoided at all costs. But if Hughes-Bear are sticking together, what other combinations are even available to them?
Myers’ top-performing partner this season? It’s Hughes.
Ekman-Larsson’s top-performing partner this season? It’s Bear.
So those options are off the table.
Ekman-Larsson and Schenn have played some minutes together, with bad results. Myers has been a disaster when paired with anyone other than Hughes and, for some reason, Kyle Burroughs.
Perhaps making Burroughs a more permanent fixture in the lineup could be a solution, but then where does that leave OEL and Dermott?
The more one plays around with the potential pairings, the more one gets the sense that the Canucks’ best option may be to leave one or both of Ekman-Larsson and Myers in the pressbox. Statistically-speaking, a blueline of Hughes/Bear, Burroughs/Myers, and Dermott/Schenn should outperform the setup they are currently running with.
Even then, however, it’s anything but a perfect fix. One solution in the form of Hughes/Bear just opens up the door to a whole host of other problems on the blueline.
Which is not to say that the success of Hughes and Bear as a pairing is a negative thing. It’s anything but. The Canucks have searched for years for an effective partner for Hughes, and they seem to have found one for the low, low price of a fifth round pick (with bonus Lane Pederson!)
Bear should absolutely be re-signed by the Canucks, and he and Hughes should continue to play together as frequently as possible.
Really, it’s just a testament to how much a mess the Vancouver blueline is in general, and how — despite being the primary focus of discussion for the past couple of seasons — finding Hughes a partner was only ever a small part of the issue.
Hughes was probably always going to figure it out, with or without a partner of Bear’s quality. It’s the figuring out of the rest of the defence that will prove far more difficult, and there are no easy answers to be found there.
Editorials
Recent articles from Stephan Roget