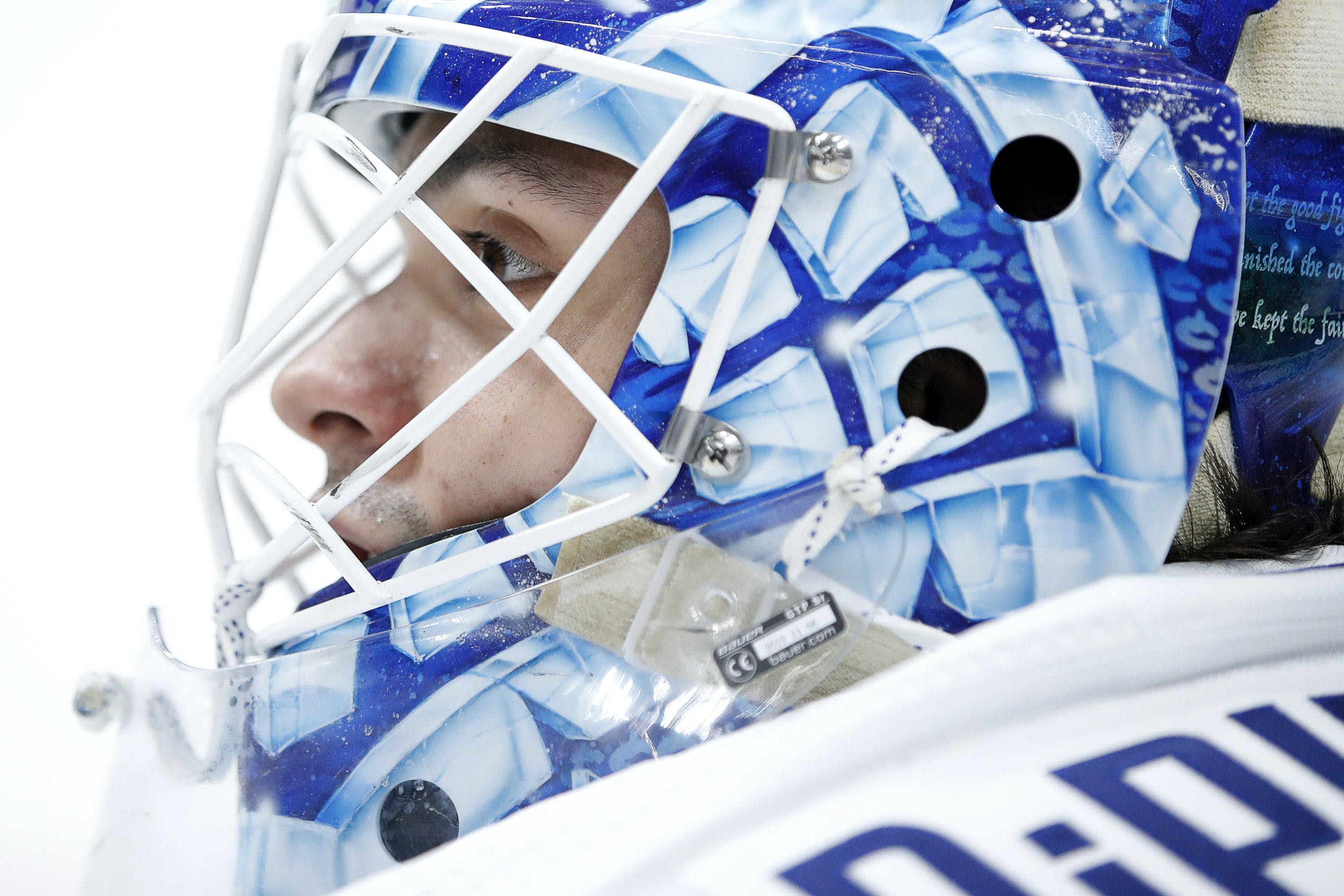 By Faber
1 year ago
The Vancouver Canucks have two of their top prospects on the new regular-season taxi squad this season.
Jack Rathbone and Mikey DiPietro are 21-year-olds who are on track to play NHL games in the near future.
For DiPietro, it’s a precarious situation as he is around one of the best goaltending coaches in the world but not getting into any game action any time soon. However, loaning him to the Manitoba Moose or sending him down to the Utica Comets is an option. The Moose seems like a better option as it will keep him in Canada in case of an injury to the Canucks’ two current goalies. The Comets also have a full set of goalies at the AHL level with the two Blues prospects and Jake Kielly in the mix.
Travis Green confirmed on Thursday that goaltending coach Ian Clark is consistently out on the ice with DiPietro after the main group finishes practicing.
This is excellent news as DiPietro is coming off a season where he became the full-time starter in the AHL and was progressing very well for a kid who was drafted in 2017. The extra work with Clark should get fans excited for what is to come from DiPietro. Last AHL season, our Cory Hergott spoke with many higher-ups in the Comets organization and all of them said that DiPietro was one of the hardest working players they have ever seen on the ice.
DiPietro is surely missing an aspect of his development with no game action but hot damn, being with Clark is a nice back-up plan.
The other important prospect on the taxi squad is Rathbone. The young defenceman is in a different situation than DiPietro as Rathbone has never played in a professional league. The option to go overseas was there for Rathbone this offseason but he chose to remain in Vancouver and make a push to crack the NHL roster out of camp. Obviously, that did not happen and he has found himself on the taxi squad instead.
Rathbone has hopped up with the NHL team for some practices but has not officially been called up to the team at any point this season.
He’s so close to being NHL-ready. We all saw flashes of absolute excellence at training camp and the only thing that is keeping him off the roster is the fear that he is not ready to defend against NHL players.
It’s hard for him to get up against NHL competition while the only forwards he can even battle against are Marc Michaelis or Loui Eriksson. That’s not a knock on Michaelis as I do think the Canucks should give him a shot sometime soon here with Justin Bailey going down with what looked to be a shoulder injury.
The Canucks have bounced around with Jalen Chatfield and Olli Juolevi as their sixth defenceman lately. Brogan Rafferty got his shot earlier in the season and the next up should be Rathbone.
There’s a lot to like about him, he shows that star potential but needs to be given a chance.
That chance will come, but for now, he remains on the Taxi Squad, in their strange setup.
On what the day-to-day is like for that group and who is working with them, Travis Green said, “It varies depending on what the coaching staff is doing. Chris Higgins is with that group daily. Ian Clark hops on the ice with them and we’ll have one or two of our other assistants go on the ice with them and we’re trying to make sure that they’re getting the same video that the other players are doing. But like I said, it depends on our schedule with the big team. Obviously, there’s only so much time and we’re working as a staff as well with our group.”
Green is a coach who has seen players develop at a variety of different levels, as he has been a coach in the WHL, AHL and now the NHL.
“It’s hard,” said Green when asked about the development for the young players who do not have NHL experience. “As you said, you’ve got a couple of guys in there that haven’t played at this level or played pro hockey and we’re trying to mimic certain things that are going to help them to progress their game as professionals. Nevermind just playing in the NHL, we’re going to continue to develop them and develop their game (as pros).”
It’s not the best situation for the players but DiPietro is definitely going to look like a different goalie next time we see him on the ice. As for Rathbone and the other young players, it’s really tough to see them jump right into NHL action with no game experience this year and little to no NHL experience in the past.
Michaelis, Rathbone, DiPietro, Rafferty and Guillaume Brisebois are currently on the Taxi Squad and we will see how things shake down when more NHL injuries or poor play forces them into action.
Uncategorized
Recent articles from Faber