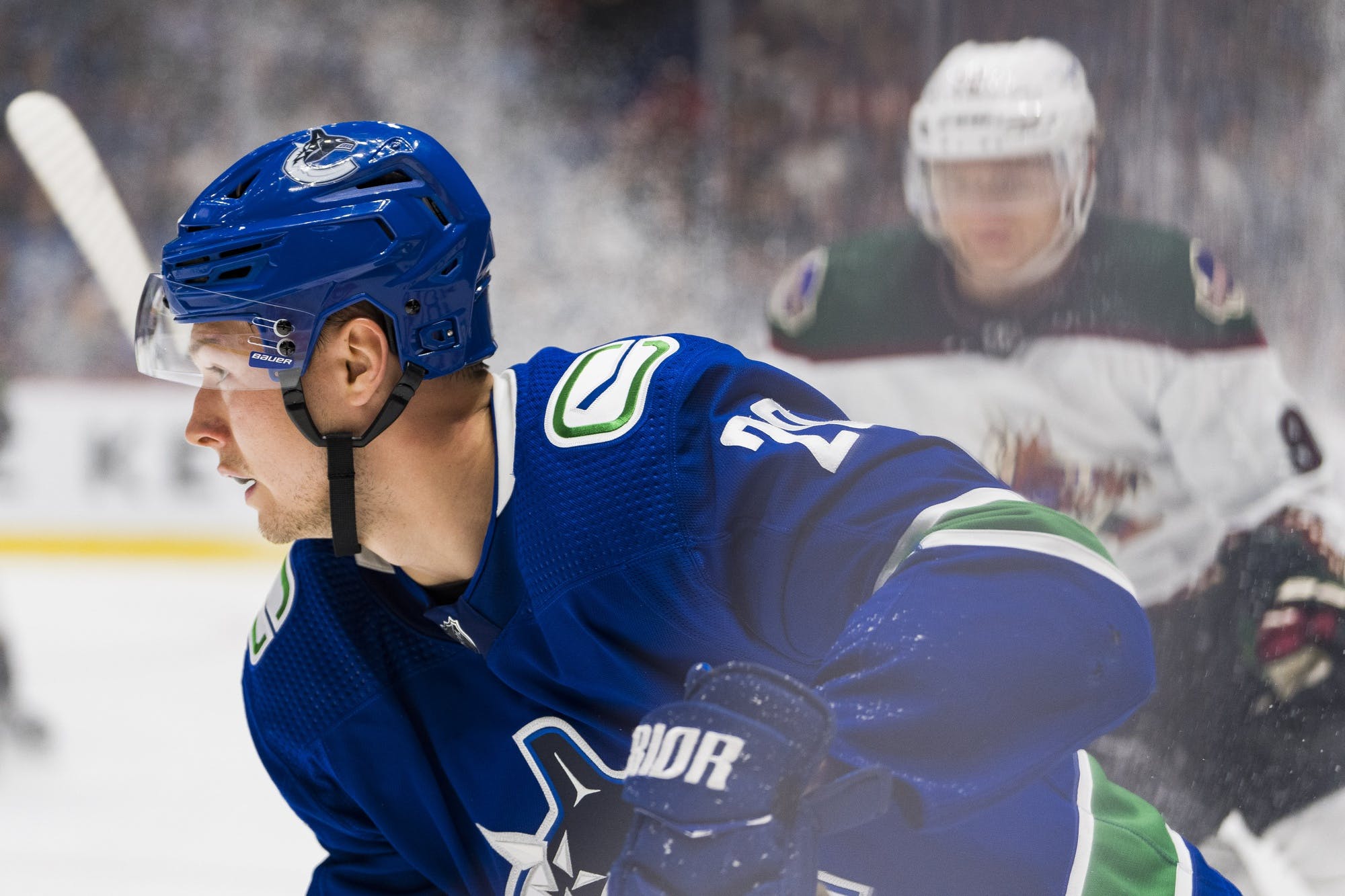 By Stephan Roget
3 months ago
Welcome back to opening day, folks.
Earlier today, your resident amateur capologist attempted to predict the handful of different ways that the Vancouver Canucks could navigate the salary cap as they set their opening day roster for the 2022/23 season.
Well, we were close, but close only counts in horseshoes and hand grenades, as they say. It definitely doesn’t count with salary caps.
But, hey, we’re not terribly disappointed to have blown it. Because how many times can we have genuinely said this in franchise history: the Canucks have grossly exceeded even our most optimistic expectations.
Yes, the Canucks are the first team in known NHL history to submit a “perfect” opening day roster, maximizing their available LTIR space right down to the very dollar.
Earlier in the day, the Toronto Maple Leafs earned praise for getting their opening day roster to within $4 of perfect, but then the Canucks had to come in from behind and drop a couple of toonies on them.
Here’s how they pulled it off.

In our earlier article, we mainly erred in estimating the potential Season-Opening Injured Reserve cap hit that would be incurred by Phil Di Giuseppe. To be fair to ourselves, it was pretty tricky business that involved counting the days that Di Giuseppe counted as a roster player, despite his never suiting up for any actual games.
We wrote:
Basically, [Season-Opening Injured Reserve is] an injured reserve set aside for those players who get injured in NHL Training Camp, and thus still deserve to draw their NHL paycheques while recovering, but who were never really in that team’s plans to begin with and have no business counting against the cap.
For these players, the rule is fairly straightforward: a player on a two-way contract who played fewer than 50 NHL games the season prior and who was injured prior to the opening roster will have their cap hit pro-rated by the number of days they spent on the roster the season prior.
For Karel Plasek, injured since prior to Training Camp and having spent zero days on the Canucks’ roster last year, the math is easy: $0 cap hit.
For Phil Di Giuseppe, it’s a little more difficult.
We figured the SOIR hit for Di Giuseppe to be somewhere south of $100K. In actuality, it proved to be exactly $146,250, and that extra bit of hit proved key to setting the perfect roster.
Karel Plasek, for the record, also went on SOIR and incurred no cap hit.

The LTIR Formula and the Number to Hit

With that SOIR hit locked in, the Canucks set about the second option we discussed in our article, the one that would invoke the so-called “Training Camp Formula” of LTIR, described as:
ACSL = Team cap hit – LTIR player’s cap hit. (ACSL can never exceed salary cap ceiling).
In short, this was the result of the team not being able to get under the cap with Micheal Ferland’s contract on the roster, necessitating his placing on LTIR as a part of setting their opening day roster. It should be noted that the team wanted to avoid placing the also-injured Ilya Mikheyev, Tyler Myers, and Travis Dermott on LTIR, as well, because that would have necessitated an absence of ten games and 24 days for each of them.
From there, they’d be able to exceed their Accruable Cap Space Limit by the amount of Ferland’s cap hit for as long as he was on LTIR (as in, for the rest of the season).
Given the above formula, it became a game of setting a roster (including Mikheyev, Myers, and Dermott) that was as close to Ferland’s $3.5 million over the salary cap ceiling of $82.5 million as possible.
The number to hit prior to placing Ferland on LTIR, then, was $86 million.
And the Canucks got it on the nose.

With the roster they had yesterday (Pettersson, Miller, Boeser, Pearson, Horvat, Garland, Kuzmenko, Lazar, Podkolzin, Höglander, Åman, Joshua, Karlsson, Mikheyev, Ferland, Hughes, Ekman-Larsson, Poolman, Schenn, Stillman, Burroughs, Rathbone, Myers, Dermott, Demko, Martin), minus Di Giuseppe and Plasek, the Canucks were at 26 players and a cap hit of $86,027,917 (counting Jaroslav Halak’s bonus overages and the two buyout penalties) — close, but not quite perfect.
Placing Mikheyev, Myers, and Dermott on IR (necessitating a seven-day absence that can be backdated into the offseason) drops the Canucks to a legal active roster size of 23, but doesn’t affect the cap in any way.
Somehow, the Canucks were going to need to shave off that excess $27,917.
Enter: Danila Klimovich.
Linus Karlsson’s cap hit? $883,750.
Danila Klimovich’s cap hit? $855,833.
A quick visit to the calculator app will tell you that the difference between those two amounts is exactly $27,917.
Perfect.
It’s a number so specific you’d think the team had to have planned it when they signed the contracts, even though that would be impossible without some kind of soothsaying device.
So, the Canucks sent down Karlsson and called up Klimovich, bringing their roster to 23 players and a cap hit of precisely $86,000,000.
As their final move, they placed Ferland on LTIR, invoking the aforementioned formula and winding up with a Salary Relief Pool of exactly Ferland’s $3.5 million, the maximum amount they could have yielded from his contract.
They’ll now be able to exceed the salary cap by that full $3.5 million for the entire season, or spend a total of $86 million at a time (a number that, remember, includes Ferland.)
With Ferland on the LTIR, the Canucks are at 22 players to start (13 F, 7D, 2 G), albeit with absolutely no wiggle room, cap-wise. What they’ve done is essentially regained full use of the maximum $82.5 million in cap space, and they’re using all of it. Fortuitously, if Di Giuseppe ends up being out long-term, his $146,250 SOIR hit gets added to the $3.5 million in relief, too. Assuming that happens on Wednesday, that extra bit of space is all the Canucks would need to swap Klimovich back out for Karlsson, even though Karlsson now comes with his $82,500 in potential performance bonuses added to his cap hit. Further call-ups will require further placements on LTIR.
The Canucks also wind up with a Performance Bonus Pool of $2,165,000, an amount that should be plenty manageable given their sudden abundance of manoeuvrability.
It was, we can’t stress this enough, an absolute master class in cap management. The perfect shot. Everything, from the Riley Stillman-for-Jason Dickinson exchange to the number of days Di Giuseppe spent on the roster, factored in to nailing this so hard, and they did it.
Credit and kudos are due to the entire Canucks’ front office, with the first and loudest probably deserved by AGM Émilie Castonguay, a former agent who was brought on for her deep understanding of NHL contract law and has now plainly delivered.
As the Canucks’ managerial team outduel even Kyle Dubas in Toronto and Julien BriseBois in Tampa Bay, we can only tip our caps (pun intended.)
Editorials
News
Recent articles from Stephan Roget