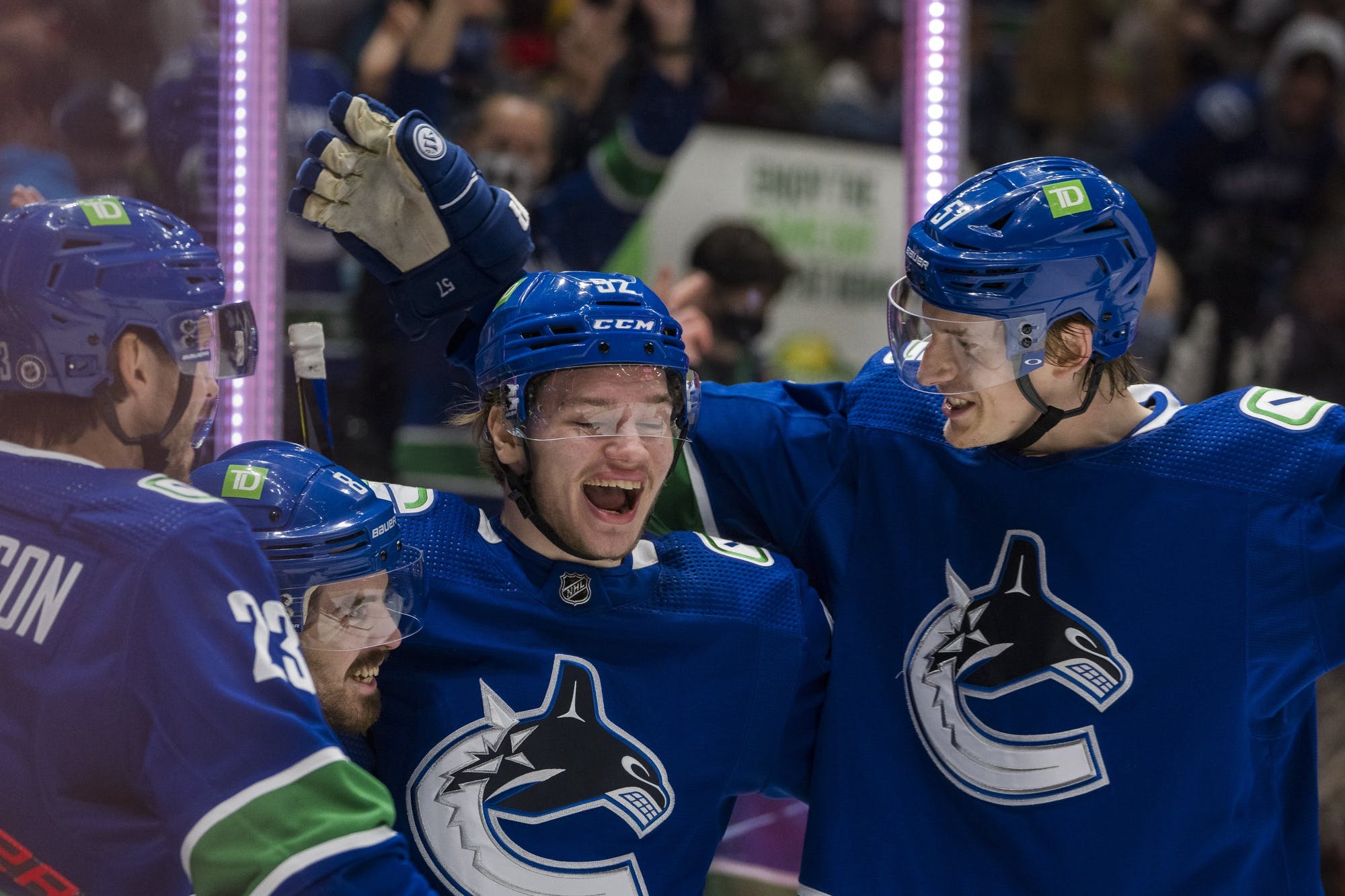 By Lachlan Irvine
1 year ago
The Canucks are heading out to discover who they are, in the same way that characters from so many summer movies do — with a road trip.
Barring any extra delays — massive knock on wood — the Canucks are entering a stretch of games that will undoubtedly come to define their season; a five-game trek across the southeastern U.S. that’ll pit them against half of the NHL’s top ten teams based on winning percentage. The first of those five battles is tonight, against the league-leading Florida Panthers.
The Canucks have had a lot go their way lately, and it’s entirely possible that this week will end up being a continuation of that trend. A number of players who’ve entered COVID protocol during the month have fully recovered without missing so much as a game. A few of the Pacific Division teams in Vancouver’s path have been struggling to hold onto their respective leads in the playoff race.
But no matter how rested Bruce Boudreau’s troops are, they’ll be going up against some of the deepest rosters in the NHL. The Panthers and Tampa Bay Lightning have each gone 6-3-1 in their last ten games, the Carolina Hurricanes are one of just a few teams that have matched the Canucks’ 8-1-1 stretch over their last ten games, along with the Nashville Predators, who currently lead the Western Conference.
It’s no secret that this trip will be the deciding factor in how management decides to handle the upcoming trade deadline, and whether or not they believe the Canucks have actual playoff potential. President of Hockey Ops Jim Rutherford has made mention of this trip a number of times and its value in determining where the team is at in the short term.
So what constitutes a road trip well managed for the Cardiac Canucks?
Let’s start with the pure numbers. Whenever analysts discuss an ideal point total from road games, the .500 mark is usually brought up with the idea that quality teams win the majority of their home games. But even with the ‘Boudreau Boost” streak in effect, the Canucks are starting from way behind the eight ball thanks to their first two months of games, meaning that bar of five points out of a possible ten needs to be a bit higher.
Based on the deficit the Canucks need to make up to stay with the leaders, Vancouver likely needs to tack on at least an extra two points just to keep pace. Seven out of a possible ten points would put them at 42 on the year, currently enough to pass the Los Angeles Kings’ current record and take third in the Pacific Division.
But the ever-evolving standings are only half the equation. How the team actually performs over the next five games is the biggest factor.
Florida and Tampa both play a hard-nosed, physical style of hockey that opens up the ice for their offensive weapons through power plays and quick odd-man rushes. The Hurricanes and Predators are each a well-rounded mix of skill on offence and defence, and the Capitals, while ageing, still possess the core that won them a Stanley Cup in 2018.
Even if the Canucksr end up with a decent record, if the majority of their efforts are clearly outmatched by the likes of the Panthers, Hurricanes and Predators, or get chalked up to excellent goaltending bailing them out, it’s hard to see Rutherford and Co. moving forward on a postseason push regardless.
But if the Canucks can put together consistent solid performances against their opponents this week through continuing to push an aggressive forecheck, attempting more scoring chances from in close, and are able to provide Thatcher Demko with the same defensive support they’ve provided over the last nine-game stretch, Vancouver’s new management might be prepared to pull a 180 back to fighting for the playoffs.
Uncategorized
Recent articles from Lachlan Irvine