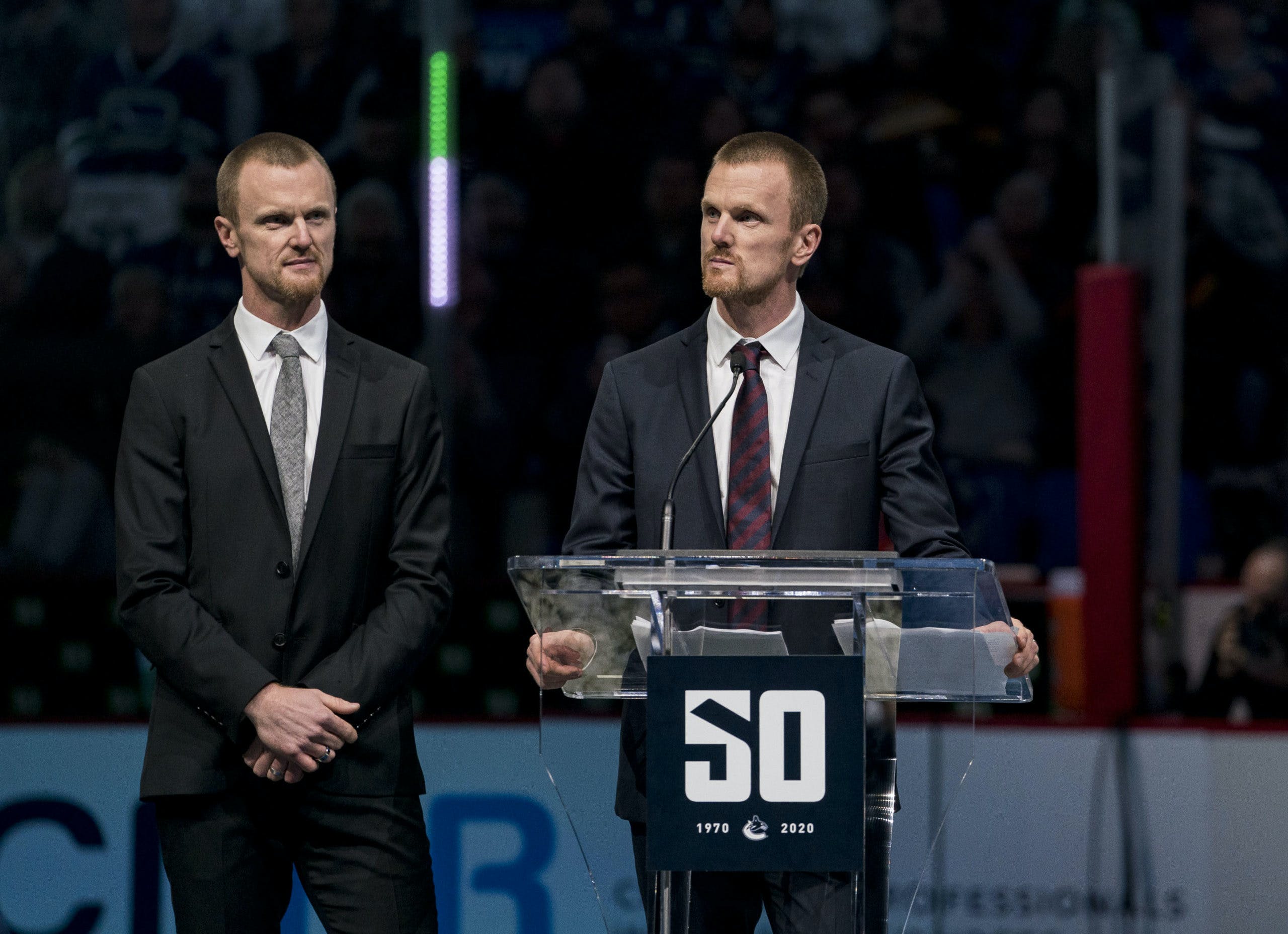 By Lachlan Irvine
6 months ago
It comes as no surprise that Henrik and Daniel Sedin want to be hands-on when it comes to building the Vancouver Canucks into a winner.
And during Henrik’s Thursday appearance on Sportsnet 650’s The People’s Show, the former Vancouver captain laid out his ambitions for his new role on the Canucks’ Player Development team.
Henrik and Daniel spent all of last season working in special adviser roles under Jim Benning and his eventual successors Jim Rutherford and Patrik Allvin. During that chaotic span, it’s safe to say the Sedins learned a lot more than they probably expected to.
“We’ve seen a lot so far only being there for a year,” Henrik said with a laugh. “We were part of the first draft class here and free agency, and we just tried to soak up as much as possible up there. [There were] a lot of changes throughout the year as you all know, and I’m just really excited to be working with Patrik and Jim and the new staff.”
The plan from day one seems to be to give the Sedins a feel of every hockey ops department and see where they felt their best long-term fit would be. That place ended up being back on the ice in Player Development, where they’ll be joined by former teammate Mikael Samuelsson and retired NHLer Mike Komisarek.
Henrik feels that being more involved working with younger players on the ice, particularly in Abbotsford with the AHL team, is what he and Daniel will enjoy most. “We spent at least once a week out there for practices and then we watched pretty much all their games,” Henrik said.
“That’s going to be a big part of next year as well, to spend time out there and work with the prospects in Abbotsford helping them reach their potential. If you don’t put in the time and investment into those guys, you will never get the full value out of your draft picks. So drafting a guy is only a small part in getting the best player in them.”
And if any players understand the importance of putting in the time with prospects, it’s the Sedins. After being drafted 2nd and 3rd overall respectively in 1999, it still took Daniel and Henrik a few years of NHL seasoning to reach their superstar potential.
But even with that experience under their belt, Henrik knows that today’s top prospects go through an even more high-pressure experience.
“These days if you get drafted high, you’re expected to come in and help right away and be one of the top players on the team so I think it’s tougher in a way too. Because if you’re not that guy who’s gonna come in and you’re not ready to play right away, it’s easier to give up on them,” Henrik said.
While the Canucks’ currently have a small selection of blue-chip prospects for the Sedins to work with, one player they’ll be working closely with in Abbotsford is 2021 second rounder Danila Klimovich. The 19-year-old centre had trouble finding his way onto Trent Cull’s playoff roster due to his defensive struggles and low scoring output, but Henrik feels that more time in the AHL is all he needs.
“I think coming into the AHL at that age, he took some steps for sure last year. And the coaching staff there did a great job every day to talk to him and try to get him to understand what’s different from the game in Europe,” Henrik said.
“There’s things that he needs to work on for sure, but his size and his skill level and the shot and everything, he has that. So there’s just a matter of being patient with him. Let him get to this level at his own pace, and don’t force him up here.”
Henrik’s hope for aiding other young players making the jump from the AHL to the NHL comes down to communicating what’s expected of them. “I think there’s always four or five things that everyone needs to do. It doesn’t matter if you’re playing in Abbotsford or up here,” Henrik said.
“The skill level is what’s going to differentiate if you play on the first line and get power play time, or if you’re on the fourth line, maybe a PK guy; there’s four or five things that everyone needs to do, it doesn’t matter if you’re the highest-paid player or if you make 75 thousand down in Abbotsford, it needs to be expected from everyone. I think we took a lot of pride in that when we played as well and that’s something that you need to have.”
More from CanucksArmy:
Uncategorized
Recent articles from Lachlan Irvine