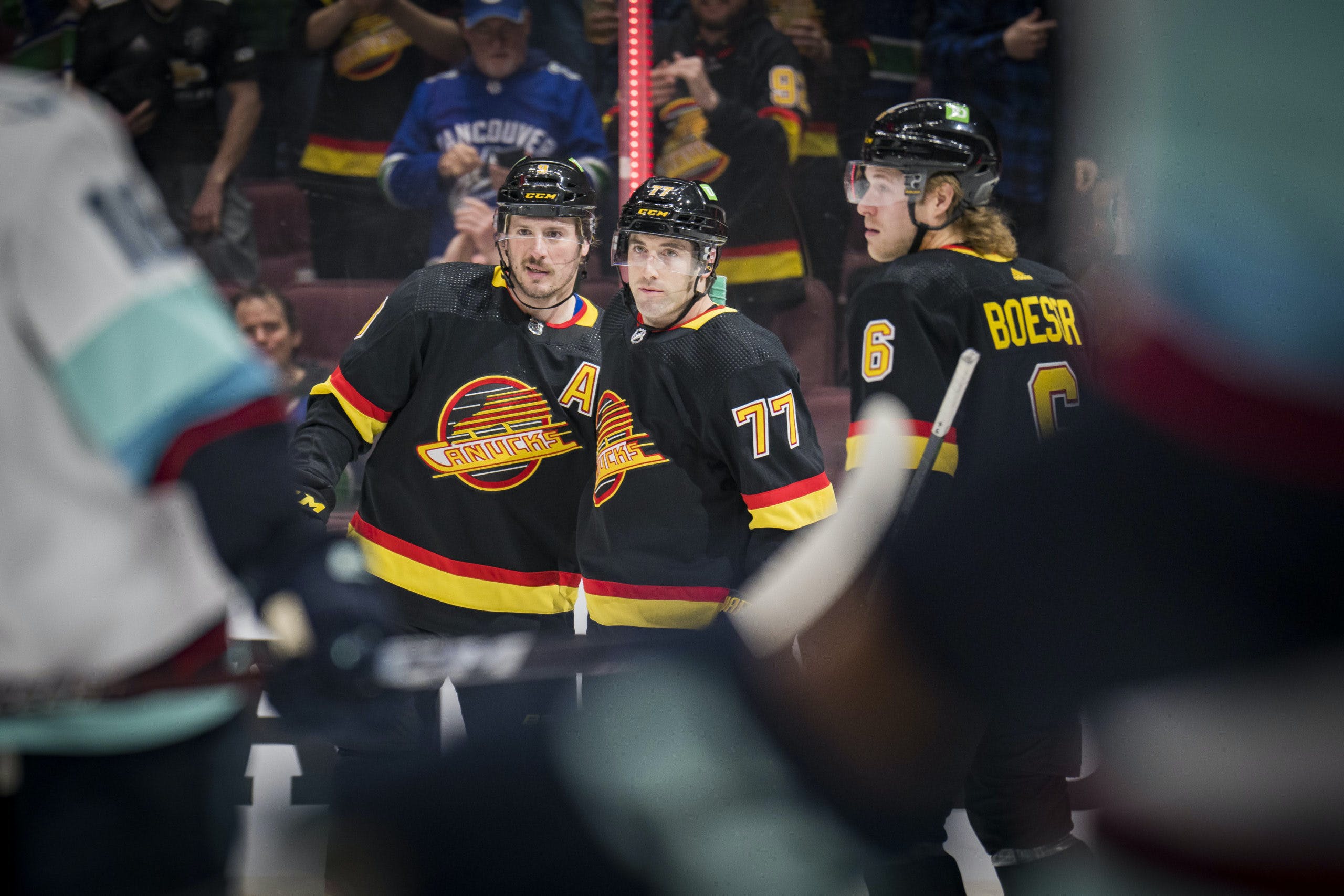 By Noah Strang
8 months ago
Remember getting your high school yearbook and flipping through to find that you had won most likely to succeed? Yeah, neither do I. However, I do remember flipping through the pages looking to check if I had won any of the less desirable superlative awards.
Every year, the Vancouver Canucks hand out team awards for a variety of categories. From the Walter “Babe” Pratt Award for the best defenseman to the Fred J. Hume Award for the Canucks’ unsung hero, the team-specific awards allow players that aren’t winning league-wide hardware to get some recognition.
While the Canucks’ awards do a solid job at accomplishing that goal, it’s still a lot of the same names dominating the trophy case. There isn’t a ton of room for someone like Canucks legend Linden Vey to pick up an award.
So I decided to change that.
Just like how your high school introduced a “most likely to return as an employee” so that everyone could win an award, here are a few Canucks awards they should add to make sure everyone feels included.

Awarded to the best BC-born player on the Canucks

This one was a battle that came down to the wire between Brad Hunt and Kyle Burroughs. Both of them are serviceable depth defencemen that grew up in the lower mainland and who are now living the dream of playing for their hometown team.
Hunt narrowly edges out Burroughs in a nail-biter thanks to a couple more points (17 vs 5) and a few extra games played (50 vs 42). Despite losing out on this coveted award, Burroughs did still have a good season and showed that he wasn’t afraid to lay the body on more than one occasion. Unfortunately, he suffered an injury down the stretch and it was Hunt that put together a few strong performances, including a clutch goal against the New York Islanders on March 3rd.
“Never would I have ever dreamed of playing for my hometown team, scoring a goal, and getting a huge win when we needed it most,” said the Maple Ridge native after the game.

While Chiasson doesn’t have the speed that Hansen used to spring himself for so many breakaways, he was the most exciting bottom-six forward to watch for a good chunk of the season. He even showed some good chemistry with Elias Pettersson when the two got to play together near the end of the season.
Chiasson is a skilled player that vastly outperformed expectations after arriving at training camp on a tryout offer. He finished eighth on the team in goals with 13, not bad for a player who had to fight just to get a roster spot.

Awarded to the biggest tease on the Canucks

There were countless times this season that Nils Höglander would pull out a smooth deke, sliding by defenders into the slot for a prime scoring opportunity. Or maybe he was using his head to find a soft spot in the defence, sneaking past everyone for a clear one-timer chance. The crowd would ooo and aah as Höglander unleased a shot from one of these prime scoring opportunities, only for the goalie to turn it away.
Out of Canucks with more than 100 minutes of 5-on-5 ice-time, Höglander was second on the team in individual expected goals per sixty minutes. The numbers show he constantly found himself in a scoring position, he just really struggled to finish those chances. From his rookie to sophomore season, his 5-on-5 shooting percentage fell from 11.21% to 8.11%
This isn’t supposed to be a roast of Höglander. He’s a young player with a ton of potential and everyone can see how great he can be. He just didn’t get the bounces this season and that makes him the unfortunate recipient of the first-ever Mason Raymond Award. Hopefully he gets back to more plays like the one below next season.

Awarded to the most physically effective defenceman

The Canucks have been missing an element of toughness on their roster in recent years. In fact, it was something that Jim Rutherford recently identified as a team need for this offseason.
“We don’t have enough sandpaper,” said Rutherford. “It’s a different game in the West. We have to get some guys — not a lot of guys — but a few guys that are a little bit heavier, to play with some sandpaper.”
Luke Schenn returned to the Canucks this season for his second stint with the team and brought that physical presence. He finished fourth in the league in hits despite playing just 66 games, recording 273 over that time period. Schenn also showed he wasn’t afraid to fight when the situation demanded it, regularly stepping up for teammates.
Which superlative award for the Canucks 2021-22 season would you hand out? Leave your idea in the comments below.
More from CanucksArmy:
Uncategorized
Recent articles from Noah Strang