Grateful to be at Canucks camp, Brady Keeper maintains perspective of upbringing to fuel his return from injury 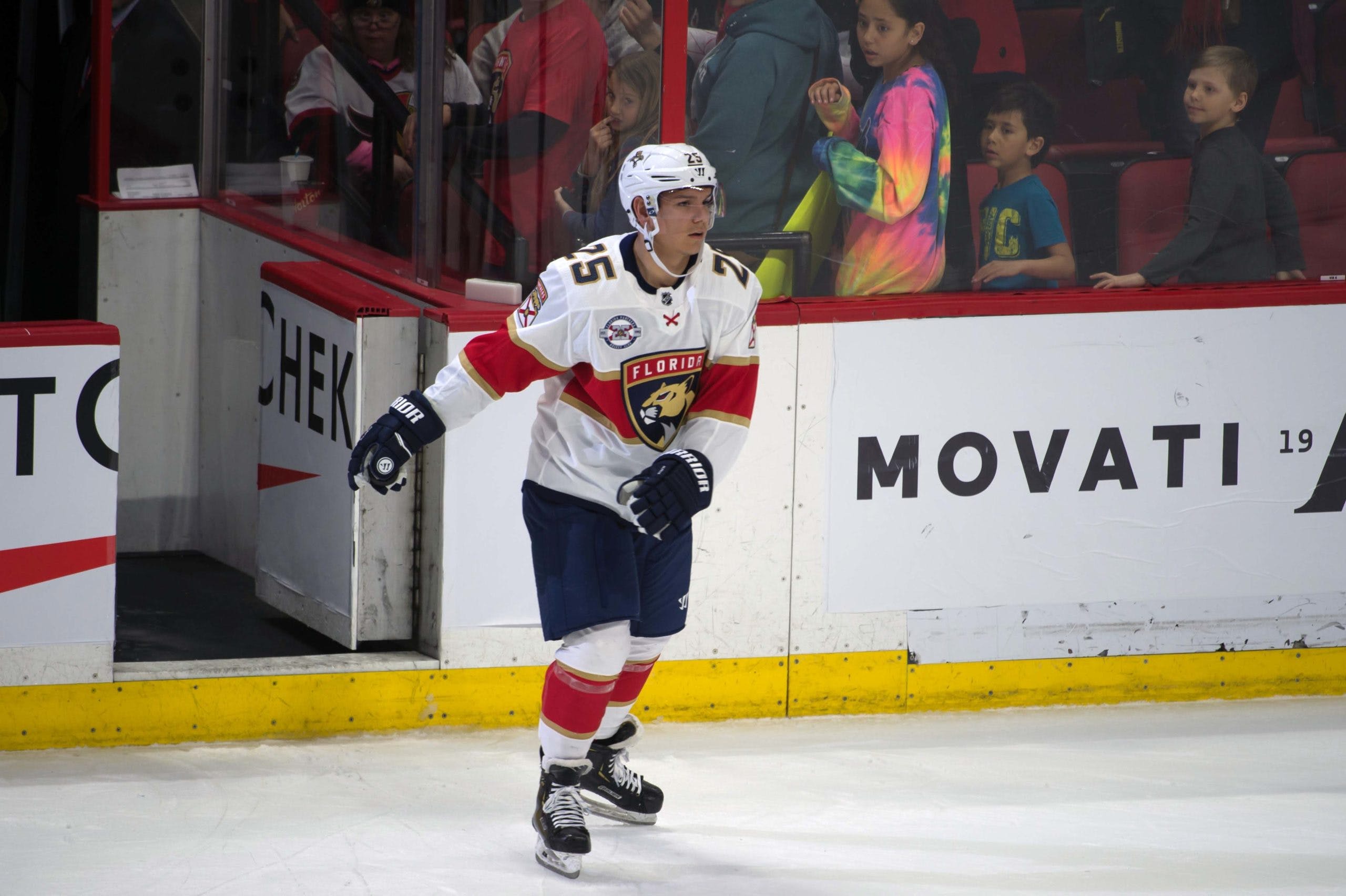 By Cody Severtson
2 months ago
Until his horrific leg injury at the end of last year’s training camp, Brady Keeper had never sustained an injury during his hockey career.
After a group session at training camp in Whistler, Keeper held court with the media to discuss his injury, recovery, and time missed. When asked about how difficult was it to miss so much time — Keeper didn’t suit up for a single game last year — he could only chuckle when dropping the almost impossible-to-believe fact.
“It was hard. First ever injury. I’ve never been injured,” Keeper said with a laugh. “I was pretty lucky until last year.”
According to Elite Prospects Keeper had amassed 384 regular season games and 25 postseason games played across multiple levels. During that same stretch, he accumulated over 875 penalty minutes. The odds of making it until he’s 25 years old without injury, playing as physically as Keeper does, and as much as he did as a defenceman, is staggering.
Keeper’s iron-man streak ended with surgery to repair his broken tibia and fibula.
The recovery was a long and difficult process.
But Keeper’s upbringing in Pimicikamak Cree Nation prepared him for the tough road.
“It was hard,” Keeper said of his injury recovery. “But, to be honest, where I come from, we go through a lot of stuff. So, I had that mentality already to be like, I’m going to come back and be better than ever.”
Keeper spent most of his time in recovery with his wife and two kids. When asked how he kept busy during his recovery time, Keeper remarked that there had not been much time available to spend with family since he’d turned pro back in late 2019.
“It was good to be around the kids and the family for the whole year. But it was also hard to miss a lot of ice time, especially with the COVID year before.”
After a lengthy rehab process, Keeper said he’d been skating quite a bit before noticing that he was finally out of the woods.
“I didn’t notice it. I felt fine. Everything I did felt fine. Doing jumps and stuff like that, I felt [it in] my knee. But not anymore.” Keeper began to skate again about a month and a half before the end of the 2021-22 season. When asked if he’d need game action to know whether his leg had fully recovered, Keeper brushed off the concerns, “I feel fine, honestly. I feel good. Obviously, it takes time to get into things. But, once I start playing more and skating more, it just comes naturally.”
Because of the pandemic-shortened season and his untimely injury, Keeper has only amassed twelve AHL/NHL games since August 2020. With the Canucks looking to improve the right side of their defence internally, Keeper has an excellent opportunity at this year’s training camp to throw his name back into depth spot contention.
With the Canucks’ first preseason games against Calgary just over 24 hours away, Keeper was presented a moment to comment on his excitement about playing games again. But instead, he offered an entirely different perspective.
“I’m just happy to be on the ice, honestly. My dad reminded me to be grateful for where I am, especially where I come from. So, I keep that in my heart and am just happy to be playing. I’m going to try to prove to myself and to the team that I’m trying to make the team.”
Keeper spent most of this training camp paired with recently acquired left-shot defenceman Christian Wolanin. The pair’s combined experience makes them a sure fit as Abbotsford’s 1st pair. With Quinn Hughes practicing on his off side, the queue on the right side grows a little longer. Making the Canucks out of training camp as a defenceman this season is remarkably tough. But, with Keeper’s perseverance, humility, and mental fortitude, he’s the type of dark horse bet that could absolutely make it happen.
After all, what’s another upset for a man like Keeper, who’s made a career out of overcoming the odds?
Content
Recent articles from Cody Severtson