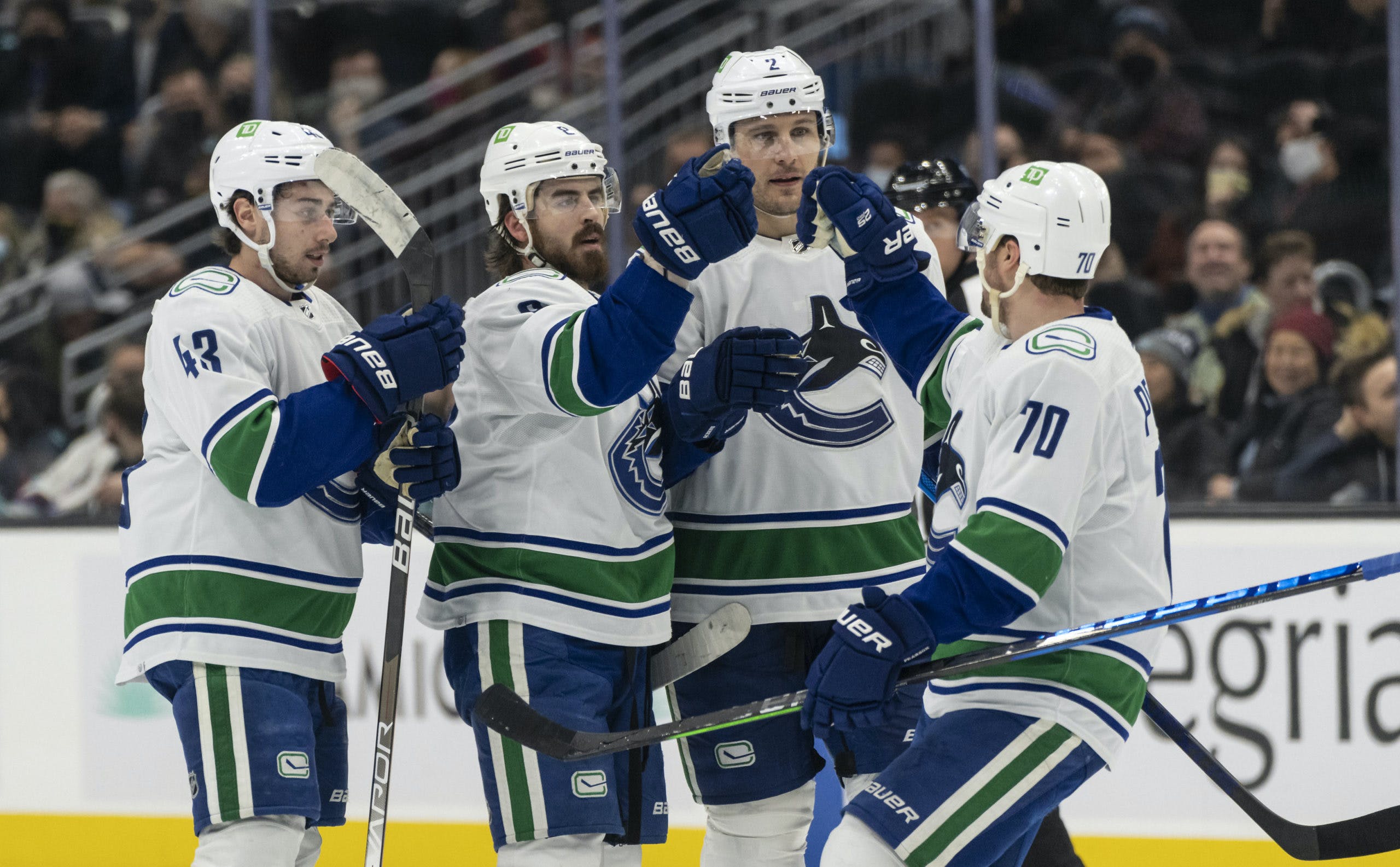 By David Quadrelli
10 months ago
Sure, it’s not technically the exact halfway point of the season just yet, but the All-Star break serves as a proverbial halfway point — as it serves as the perfect opportunity to look back on what the season has brought so far.
Here are five takes from the “first half” of the Vancouver Canucks’ 2021-22 season.

J.T. Miller should be an All-Star

We’re getting off to a rather topical start!
Without a doubt, J.T. Miller has been the Canucks’ best forward this season. He’s the Canucks’ only point per game player and leads all forwards in points by a rather sizeable margin.
He’s been extremely effective this season, so you can understand why it came as a bit of a shock when he was snubbed from the All-Star game, which takes place in Vegas this weekend.
He joins the likes of Nazem Kadri on the NHL’s All-Star snub list — a product of the current format that requires one representative from each team to be a part of the All-Star festivities.

Speaking of forwards, let’s talk about Elias Pettersson.
As if we haven’t done that enough this season.
Rightfully so, much has been made of Elias Pettersson’s struggles this year.
After an impressive rookie and sophomore season, including scoring at an extremely respectable clip in the 2020 playoffs, Elias Pettersson has struggled to find his game this year, no matter what anyone tries to tell you, (but more on that later).
Lost in the shuffle, however, is just how average the rest of the Canucks’ top six forwards have been this season.
Sure, they’ve had to deal with various challenges this season, most of which came at no fault of their own, but the fact of the matter is, Quinn Hughes — a defenceman — is second on this team in points.
The next highest scoring forwards behind Miller are Elias Pettersson, Brock Boeser, and Conor Garland, who are all in a three-way tie for second among forwards with 24 points.
Bo Horvat trails closely behind with 23 points, but the point remains — this just isn’t good enough production from the rest of the Canucks’ top six forwards, and it seems few are talking about it. 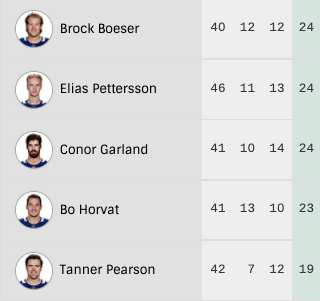 Obviously, the expectations are higher for Pettersson — and rightfully so — but the spotlight would certainly be shining brighter on the rest of the Canucks’ top six right now if Pettersson weren’t struggling so much.

Elias Pettersson still hasn’t found his game, no matter what people tell you

If you felt it was premature when Canucks fans and media were rejoicing and proclaiming that Elias Pettersson was “back” after scoring two goals against Washington on January 16th, you were probably right.
We don’t blame you or them for clinging onto that glimmer of hope, but the fact of the matter is — Elias Pettersson isn’t “back”.
He’s shown flashes, and had his most productive month of the season in January, which is certainly promising, but presuming “back” suggests the standard that Pettersson set for himself in years one and two, then he’s not particularly close.
Multi-point games and consistent point streaks are the real indicators that Elias Pettersson is “back”. Until that day comes, don’t try to kid yourselves.
But as mentioned above, don’t forget that he’s not the only forward on this team whose production hasn’t been there this season.

Tucker Poolman is playing exactly how analysts expected him to

This one is simple, really.
All the data publicly and privately available to NHL teams suggested that Tucker Poolman was likely nothing more than a replacement-level bottom pairing defenceman, and that’s exactly what he’s played like this season.
Luke Schenn has absolutely outplayed him and is making $850,000 per year this season and next, and even Noah Juulsen — who is a somewhat high-tier AHL defenceman — has held his own just fine playing on the Canucks’ bottom pair as of late.
We’re not trying to say Juulsen is better than Poolman, but the fact that its close is saying something.
What we are certainly saying, however, is that Luke Schenn is certainly playing better than Poolman, and if Travis Hamonic were healthy, we’d likely be looking at Poolman being a healthy scratch.
The fact that this is the case just one year into Poolman’s four-year contract is not a good sign, and the Canucks were warned — both internally and externally — that signing Poolman was a bad bet, but that didn’t stop the last management regime from pulling the trigger on one last bad value contract.

A year off hurt Michael DiPietro and Arturs Silovs’ development

Ah yes, the first goaltending take of this article.
It’s not really a scorcher per se, as the proof is in the proverbial pudding with the results seen by the Canucks’ prospect netminders in Abbotsford this season.
It’s not a stretch at all to say what many had feared would be the case — a year of not appearing in game action hurt the Canucks’ two top prospect goaltenders.
This game as a result of the organization’s decision to not buck up and pay for a proper veteran third-string goaltender, instead choosing to save money by paying DiPietro an AHL salary while he sat on the taxi squad for almost the entire season; meanwhile, Arturs Silovs was given backup duties in Manitoba with the Moose and appeared in just one game.
This season in Abbotsford, DiPietro has an .894 save percentage and didn’t look great in his one NHL start this season.
There’s no doubt he’s improved the technical side of his game immensely since his rookie season with the Utica Comets in 2019-20, but there’s also no denying that the results just have not been there for DiPietro just yet.
For both he and Silovs, there’s still time to get back on the right track, but a year of no game action was a self-inflicted speedbump from the organization onto their goaltending prospects.

This one is pretty self-explanatory.
What Quinn Hughes is doing on a nightly basis for the Canucks is simply remarkable.
Add in the fact that he’s taken serious strides to round out the defensive side of his game and is now trusted to kill penalties for this team, it’s no longer a stretch to say that Hughes — who currently sits second on the team in scoring — is the best defenceman to ever put on a Vancouver Canucks uniform.
Obviously, “best” and “greatest” are two different things. Greatest is a title Hughes can acquire if he spends the majority of his career here — or best of all — does what has escaped literally every single other Vancouver Canuck and finally bring a Stanley Cup to this city.
But best? Most skilled? Those firmly belong to Hughes.
Uncategorized
Recent articles from David Quadrelli