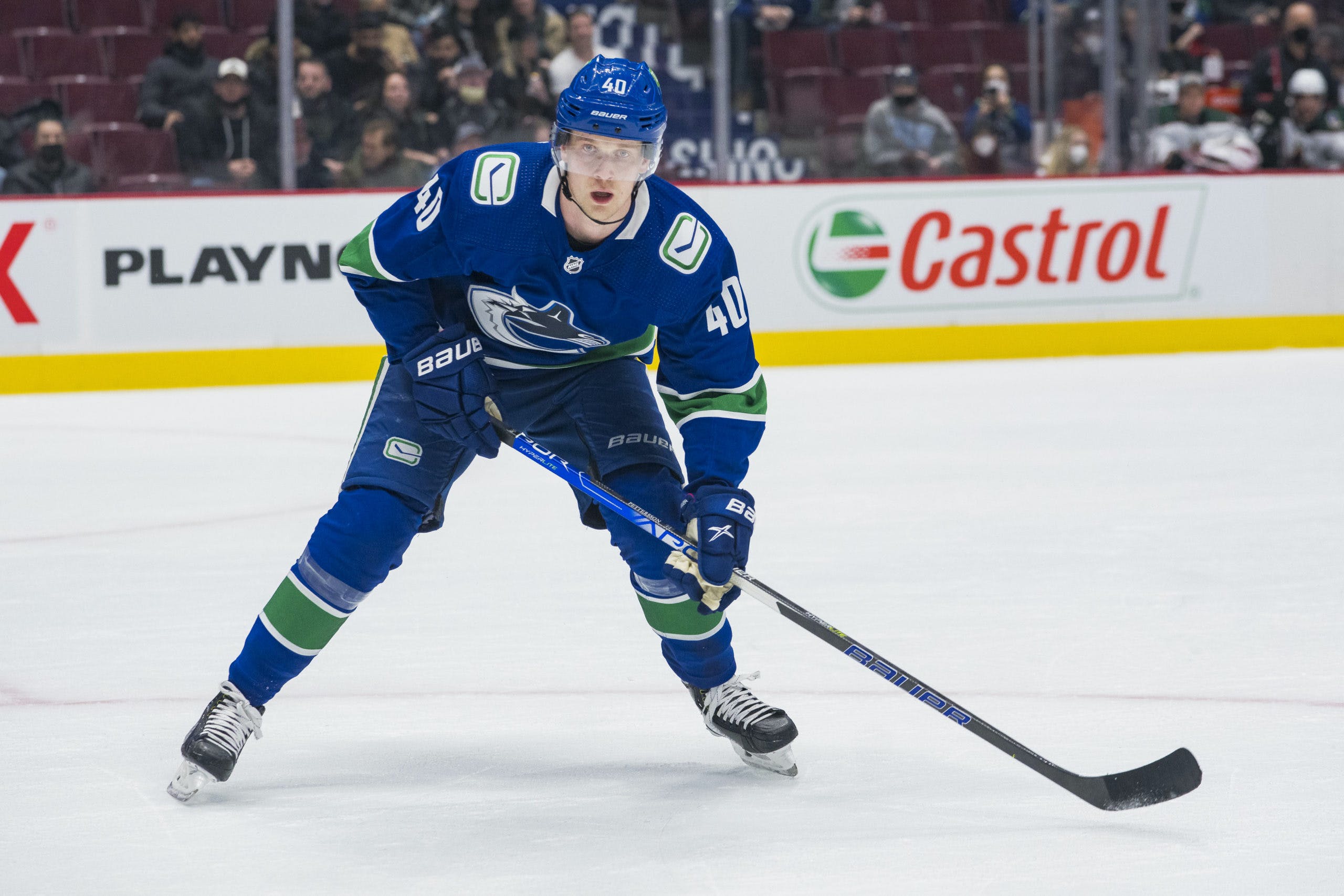 By Noah Strang
11 months ago
After a lengthy holdout before the season that saw Elias Pettersson rewarded with a 3-year bridge deal worth over $21 million, the talented Swede entered the year with big expectations. Ever since he first stepped on the ice in a Vancouver Canucks jersey, he’s been an explosive offensive player and the hope was that this year he could take another step and evolve into that franchise-defining superstar.
Instead, the first few months of the 2021-22 NHL season were a nightmare for Pettersson. His timing was off and as the slump kept going and going, he was becoming clearly frustrated on the ice. He was moved all around the lineup in hopes of finding linemates that could get him going, but nothing seemed to work.
To make matters worse, the team around him was falling apart. As the losses piled up, Pettersson was a frequent scapegoat due to his preseason holdout. Even the Canucks making a coaching change and the arrival of Bruce Boudreau didn’t do much to jumpstart Pettersson. As the team started to win games, Pettersson was still too often left off the score sheet.
This was a slump like Pettersson had never experienced in his career and as he continued to be moved down the lineup, the noise increased from media and fans in the market. There was loads of pressure on him to perform and the critics came out in full force, aided by the fact that they could point to his holdout as evidence of his lack of commitment.
Going through a slump as a young player on an entry-level contract is much different than a months-long stretch while being paid over $7 million. His poor play was frustrating for everyone, from the organization to the fans to Pettersson himself.
“If he’s playing poorly enough that fans are wondering ‘when’s this going to come?’, know that on the ice he’s seeing all the opportunities he’s missing,” said Thomas Drance of The Athletic earlier this year on the Donnie and Dhali Show.
Finally, Pettersson has turned things around and is playing some great hockey. Over the last 11 games, he’s been one of the best players on the ice in almost every game and is starting to catch some breaks. The puck luck is going his way and he’s looking like the player everyone knows he is. It’s fun to watch Pettersson play hockey again.

Through the last 11 games, Pettersson has been on fire and resembles the player that we all know and love. Through those 11 games, he’s scored seven goals and added three assists, giving him 10 points which is tied with J.T. Miller for the most over that time period.
Digging a little deeper, five of those seven goals have come at 5-on-5, an area where Pettersson was really struggling to start the season. Being able to create offence at even strength is a great sign as it shows that this resurgence isn’t just being held up by chances created with the man advantage. Even more encouraging, the Canucks are controlling 54.49% of the expected goals and 57.93% of the scoring chances with him on the ice at 5-on-5. This is more in line with the two-way dominance that we expect from Pettersson.
The trio of Nils Höglander, Pettersson, and rookie Vasily Podkolzin has been one that Boudreau has been deploying more in recent games. The three young players make for an exciting line and their results speak for themselves over Pettersson’s 11 game hot streak. The trio has played in 9 of those 11 games, outscoring opponents 4-1 at 5-on-5 while having a Corsi % of 73.21%.
“All three of us think the same,” commented Pettersson. “All three of us are still young and think like junior hockey still, but that’s what makes us good. We think fast, always trying to find the open teammate.”
The potential that these three have shown together is exciting. If the forward group can stay relatively healthy, the sky is the limit for what they can achieve together and they could form a strong line for the Canucks for years to come.

What Elias Pettersson looks like on the ice right now

During his slump, it was tough to watch Pettersson play. The player who is usually so silky, a magician with the puck, seemed to be fighting to keep it on his stick every time he got it. Instead of deking around opponents as he usually would, he was struggling to make even the simplest of passes.
Over this last stretch, Pettersson has started to look like himself again. The shots that were missing the net earlier in the year are now finding the top corner and the passes that were missing teammates are now going tape-to-tape. Everyone knew that Pettersson was too talented for his slump to last forever, but as time continued the noise got louder and louder. It’s nice to see him silence some of those critics.
“I feel like me again,” he said recently, expressing what everyone can see on the ice.
The Canucks are going to need Pettersson to keep up this torrid pace if they want a chance at contending for a playoff spot. Whatever line he’s playing on needs to be outscoring opponents at 5-on-5 for the Canucks to be the team they want to be and if that happens while developing chemistry besides the two young wingers, that’s great news for the organization.
Uncategorized
Recent articles from Noah Strang