Fans, observers, and a fashion expert weigh in: What’s the nicest Vancouver Canucks jersey of all time? 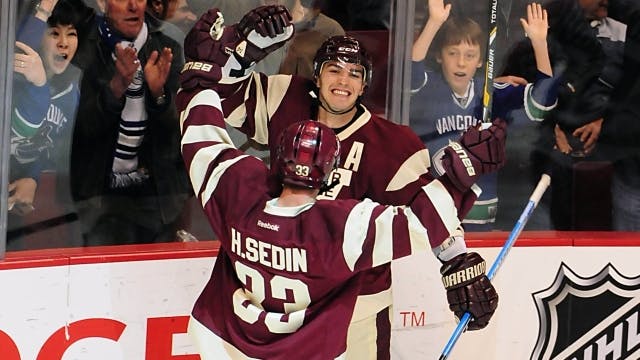 By David Quadrelli
1 year ago
With reports circulating that the Vancouver Canucks will have an “exciting announcement” about the flying skate jersey’s return in the near future, fans have started to throw around the age-old question once again:
What’s the nicest jersey the Vancouver Canucks have ever worn?
We put out a poll on Twitter to gauge fan reaction, and, as expected, the flying skate jersey won.
When the team recreated the jersey for their 50th anniversary season, fans and players alike were — for lack of a better word — big fans of the jerseys.
Captain Bo Horvat was once quoted as saying “I think we look big and mean and scary in black,” when discussing the jerseys.
Some fans even love the black flying skate jersey so much that they are deadset on having it return as the Canucks’ regular jersey full time.
While most fans aren’t at that extreme of a level of passion for the jersey, the point remains, the flying skate is a fan favourite, and seems to be the consensus favourite among fans.
For what it’s worth, the flying skate is this author’s favourite jersey.
But is there a correct answer?
The short answer is: No, there isn’t.
But did that stop us from reaching out to a fashion expert to get their opinion on it?
No, it didn’t.
Giovanni Amenta is an image consultant, stylist, and international speaker on the subject of fashion psychology, so naturally, we had to get his opinion on the never-ending debate.
First of all, here’s what he had to say about the flying skate jersey.
“It’s a classic and the logo design is my favourite. On the jersey itself though, the red and yellow they used are like ketchup and mustard.  They are also the version of those colours used to represent a deal or cheap things, which is why they are used in the McDonald’s logo, for example.”
We then asked him to break down the stick in rink jersey, which was the second most popular jersey from our poll.
According to Amenta, this is the pinnacle of Canucks jerseys from an aesthetic point of view.
“This one is the design that is the most flattering based on the V-neck which gives the look of a longer neck; the logo placement makes the chest look bigger and stronger; the patches on the sleeves make the arms look bigger; the position of the bottom stripe will make the waist look smaller based on the focal points being above and below the waist. It’s very modern as well and the colours work well together.”
What do you think is the nicest Canucks jersey of all time? Let us know in the comments section below!
Uncategorized
Recent articles from David Quadrelli