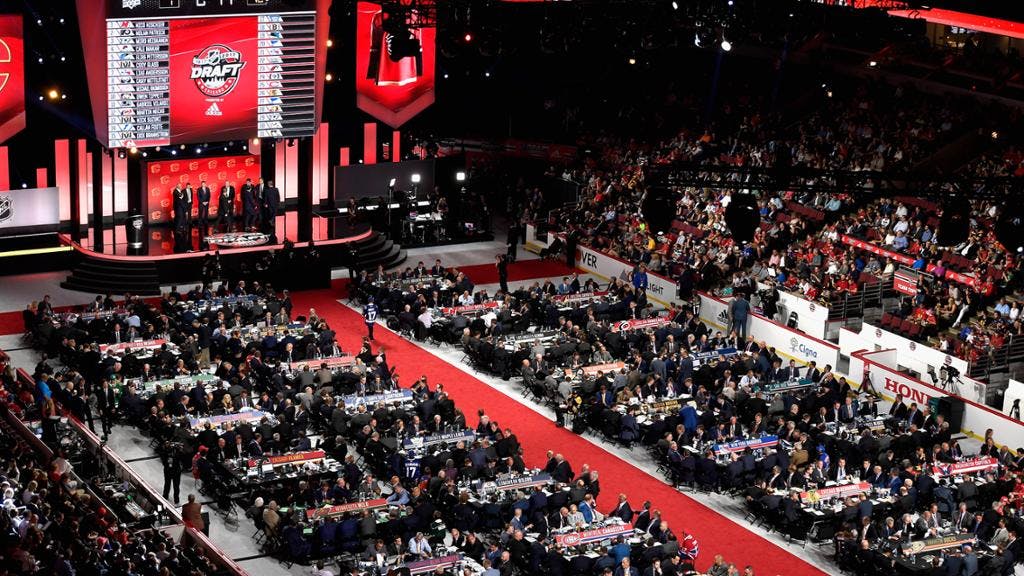 By Faber
1 year ago
With the 2021 NHL Entry Draft going down this weekend, I wanted to put my hours of research into what I would look at as an amazing two days for the Vancouver Canucks at the draft.
The Canucks need to fill their pipeline with players who have NHL potential, and also need to restock the cupboards on a few positions of need.
So without wasting any more time, let’s get into my picks for what would equate to an amazing two days at the 2021 NHL Entry Draft for the Vancouver Canucks.

Round 1, 9th Pick: The Next Top-Prospect in the Pipeline

Even though the Canucks desperately need to fill the centre and right-shot defence positions, they have to pick the best available player with their ninth overall pick.
For the Canucks, it’s easy. All they have to do at nine is let other teams take risks ahead of them and take the best player that falls into their lap.
I have a feeling that Luke Hughes is going to fall to the Canucks, but if William Eklund or Brandt Clarke is the big faller, Canucks nation should rejoice as they will have just landed an extremely high-level prospect.
They are more likely to pick one of Kent Johnson, Dylan Guenther or Fabian Lysell and that is great as well.
Guenther is a strong winger who has a good shot and skates near the top of the class in flat-out A-to-B speed. He is a couple of years away from the NHL but appears like he will be a huge boost for the 2023-24 season on an entry-level contract.
Johnson is potentially the most offensively gifted player in the draft and he will transition into the NHL as soon as next year when his NCAA season with Michigan concludes.
Lysell is a skilled Swedish star who is (overly) confident in his game and will play in the NHL after another year or two in the SHL. He has great hands and shows a strong ability to use them at speed. It’s likely a bit of a reach if they go with Lysell but I still value him over Simon Edvinsson.
My realistic pick: Kent Johnson (LW)

The Canucks likely snagged an offensive winger on day one of the draft and now step up on day two with the goal of grabbing a first-round talent, similar to Nils Höglander in 2019, with their second-round pick.
With their second-round pick, there are two ways to go. They can draft a centre or a defenceman.
If the Canucks want to go with a centre, Brett Harrison is my guy here.
Harrison is a strong defensive centre who can bury pucks in tight as he loves going hard to the net. He had his OHL season cancelled this past season and didn’t light the world on fire with his two goals at the U18s. He found playing time in Finland this past year and might be a first-round talent who is a diamond in the rough type as he wasn’t able to fully showcase his growth this past year. He also works out with Bo Horvat in the offseason.
Another centre option is Dylan Duke, who I’m not crazy about but many scouts have him around that range for the Canucks at 41. There’s just not much about his game that excites me. He’s just an average centre who found a lot of open nets with the USNTDP this past season.
As for the defencemen, I’ve got a few on my radar. First off, Scotty Morrow is my favourite pick here for the Canucks. He’s a big, right-shot defenceman who has room to grow in his defensive game but already looks like an offensive force. There are a few questions about him off the ice about why he de-committed and switched NCAA schools. I spoke with him last month and he seemed like a fun-loving kid who is ready for NCAA hockey next season.
Staying at RD, Finnish defenceman Aleksi Heimosalmi can move the puck well but is on the smaller side at 5’11”. I think the Canucks have a homerun sitting there for them if Morrow is available.
Two options if they slide who trump these prospects are Logan Stankoven (LW) and Corson Ceulemans (RD). I bet that both are likely gone by 41 but if either is there, I’m taking either of them all day long.
My realistic pick: Scotty Morrow, (RD)

Round 5, 137th Pick: Another Defenceman

The Canucks need to come out of this draft with some defence prospects, and in the later rounds, it’s time to take some swings.
At 137th overall, I’m looking at the big right-shot defenceman Ryan Mast. He is coming off a year where he didn’t get to play a season and only got some games in at a high-level prospects tournament.
He didn’t put up great numbers during his 2019-20 season in the OHL but he looked to have improved his skating a lot in the PBHH invitational — the only place I could find tape on him for this past year. At 6’4″, he’s a big body who can throw around his weight and skates with a nice stride.
He is ranked as high as #75 by McKeen’s Hockey and #94 by Recruit Scouting but comes in at #277 on FCHockey so there is some good value to him at #137 for the Canucks.
My realistic pick: Ryan Mast (RD)

A player who I really enjoyed watching tape on comes from the powerhouse TPS team in Finland. Eetu Liukas is a 6’2″, 205-pound winger who skates with a ton of pace and is not afraid to go to the net hard. He forechecks with a ton of effort and precision while his shot already looks like it has some serious pop on it.
He had a taste of the Finnish Liiga first division last season for 19 games and will have an even bigger role next season. He was coached by Sami Salo this past season and that connection may give the Canucks an inside look into what type of kid he is and how he practices and carries himself away from the rink.
My realistic pick: Eetu Liukas (LW)

Round 6, 169th Pick: Get Ian Clark to Select the Goalie he Likes

I’m not scouting goalies, I don’t like doing it, so, I’m going to pass this one off to David Quadrelli to see who he has had his eyes on and may be available for the Canucks at #169.
Hi everyone, Quads here, and Finnish goaltender Aku Koskenvuo is the goaltender I am keeping my eyes on.
He has a lot of raw talent, and could be a serious diamond in the rough with the right coaching.
I wrote a full write-up on Koskenvuo here.
Quadrelli’s realistic pick: Aku Koskenvuo (G)

Adding another big body to the defence core this late in the draft is a good value pickup for the Canucks. With the 178th pick, I like taking a swing on another OHL player who missed a full season of games. Bryce Montgomery is a 6’5″, 220-pound, right-shot defenceman who looked like his skating drastically improved. He was another player who only played games at the PBHH invitational this year. I hope the Canucks’ scouts saw this tournament as it was a good showcase for OHL players who didn’t get an invite to the U18s.
The size is the obvious trait that draws you in but he made some great stretch passes at the PBHH invitational and was able to skate around forecheckers as he escaped his own zone. He can fight too, as he did as a rookie in the OHL.
He will be back in the OHL next season and will get a ton of playing time with the London Knights.
My realistic pick: Bryce Montgomery (RD)

At this point in the draft, you are looking to just take a homerun swing and hope for connection. A team is going to take a swing on Brody Lamb in the seventh round of the 2021 draft, so it might as well be the Canucks.
The Minnesota high-schooler ripped up his final season of high school hockey and will be on to the University of Minnesota next year. He put up 54 goals and 87 points in just 24 games this past season but will need to be tested at the NCAA level before anyone can believe that he has a true NHL future.
He’s a big swing but I like this swing in the seventh round.
My realistic pick: Brody Lamb (C)
Some other names that I like for the Canucks in the fifth to seventh rounds include Gustavs Ozolins (LD), Arvid Sundin (LW) and Lucas Forsell (LW).
After my experimental draft, the Canucks come away with three defencemen (all right-shot), two wingers, one centre and one goalie. It’s a nice mix for the prospect pool and they are able to take some high upside players throughout the draft. It hurts to be missing picks in the third and fourth rounds but the Canucks made a good move getting Jason Dickinson and will have to compensate with drafting well in the later three rounds.
They will be adding two very strong prospects with their first and second-round picks and if you can find one or two prospects of real value in the final five picks, it looks like a great draft for the team.
We kick things off on Friday with round one beginning at 5 pm PST and then will follow up with rounds two through seven beginning at 8 am PST on Saturday.
Let’s have some fun this weekend!
Uncategorized
Recent articles from Faber