Through eight games, Nils Hoglander has helped the Bo Horvat line produce goals at a higher rate than the 2019-20 Lotto Line 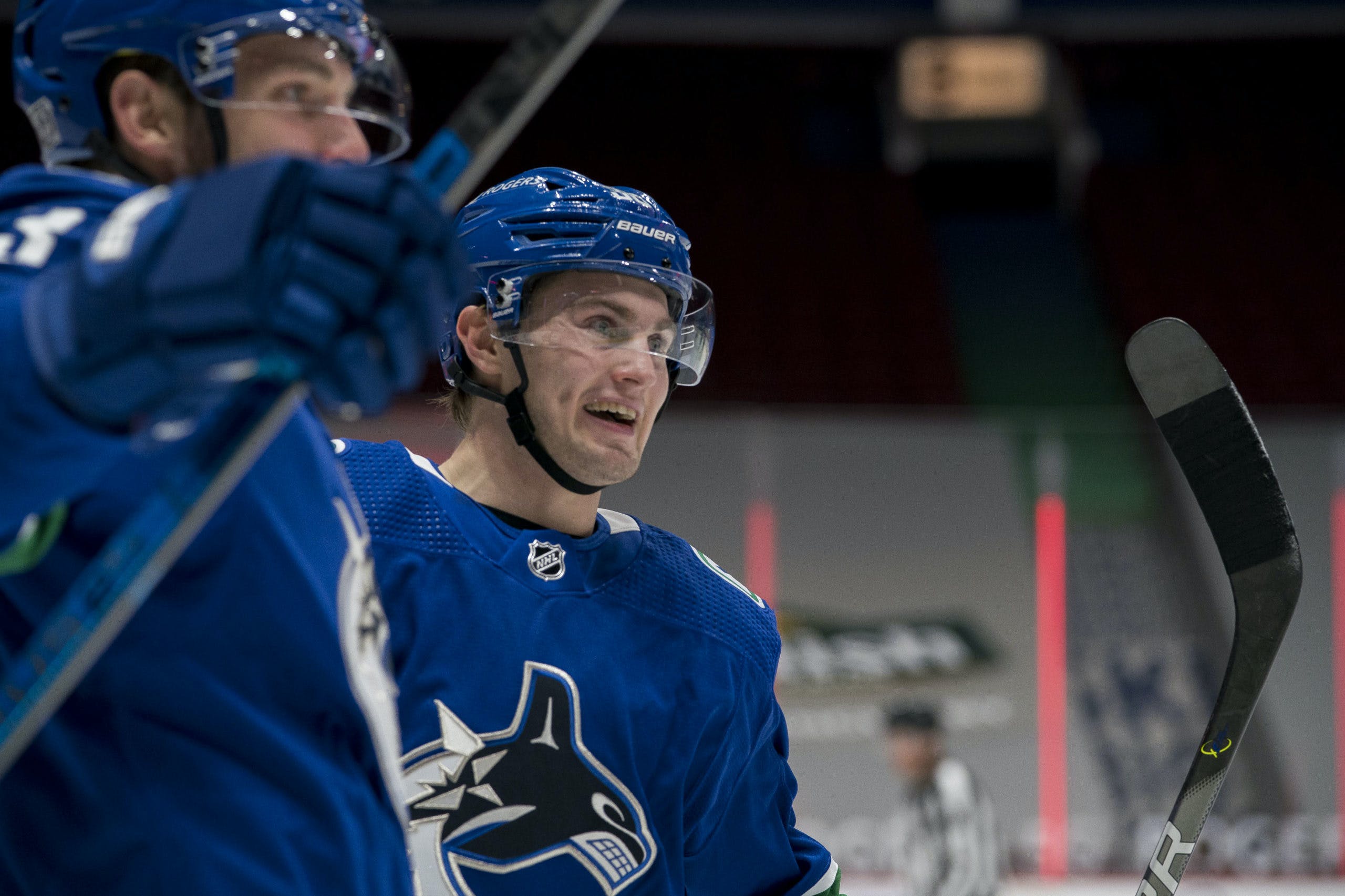 By Faber
1 year ago
There have been plenty of ups and downs in the early stages of this Vancouver Canucks season.
We have seen some gross losses, some lacklustre efforts, a couple of wins and one blowout victory against the Ottawa Senators.
The Canucks have seen some changes to their lineup since they were in the 2020 playoff bubble where they went to game seven of the second round in the Stanley Cup Playoffs. This team now has Nate Schmidt, Olli Juolevi, Nils Hoglander and Braden Holtby as some of their regular players. A considerable transformation from the core players of the playoff run like Jacob Markstrom, Tyler Toffoli and Chris Tanev.
Regularly this season, those players have been missed from the lineup, and at times have burned the Canucks in their matchups against the Montreal Canadiens and Calgary Flames. This team had to move forward with younger and cheaper players due to the cap that is being spent on the bottom six players and to a fair degree, players who aren’t even on the 23-man roster such as Sven Baertschi and Loui Eriksson ($8,291,666 against the cap).
Compounding that with the $4,068,545 being used for a Ryan Spooner buyout and a Roberto Luongo recapture penalty, that’s $12,360,211 or 15.2% of the salary cap. Not all of this is Jim Benning’s fault, but a majority of the dead money is on Benning. Through the tough cap situation that he has put himself in, Benning brought in players who have made a large impact on the team as a whole.
One of those players is Nils Hoglander, the player who Benning selected 40th overall at the 2019 NHL Entry Draft.
Hoglander has come in and blown away everyone as a second-round pick in 2019, there was reason to believe that he had a lot more development to go through before being ready for the NHL. Not only has Hoglander impressed everyone, but he has also been apart of the best forward line this season.
I almost forgot that that’s what this article is about, so let’s get to some things about how this line has been the best forward trio assembled this season.

There were plenty of questions about the Canucks’ top six going into the season. Many of them were answered when Nils Hoglander burst onto the scene. Even the biggest Hoglander supporters believe it was a long shot for him to crack the NHL roster. Believe me, I was one of them. I knew there was an incredible skillset to this kid’s game. He drove play at an elite level, but that was in the SHL. His strengths have only improved since playing in the NHL.
“Playing with Bo and Pears now, everyone knows that they are really good players and it’s easy to play with those players,” said Hoglander. “They do good things every time, so it’s easy to play with them.”
It has looked easy for that line early in the season as they have been dominating the possession stats, goal share, expected goal share and control of scoring chances.

2021 line stats courtesy of NaturalStatTrick
The Pearson-Horvat-Hoglander line is giving the Canucks top-line level production through eight games.
Their numbers have been so good that they make The Lotto Line look like a nice complimentary trio.

2019-2021 Lotto Line stats courtesy of NaturalStatTrick
Obviously, it’s early in the season and Hoglander could be shocking a lot of players with his play style. The Lotto Line has a 61 game sample while the Pearson-Horvat-Hoglander line has only played in eight games. The early returns on the line is that they can help carry a team in games. That trio has played against tough competition and has been tasked with playing against some of the top players in the NHL all while putting up great underlying numbers and producing goals at five-on-five.
There’s no sugar coating it, the Lotto Line is currently in an early-season slump. They have been outscored at five-on-five by a count of four to two and have been outshot by a count of 27-12. The Horvat line has been there to pick up the slack and turn out solid top six calibre performances night in and night out.
The Horvat line has benefitted from a 15% shooting percentage in the early parts of the season and that likely won’t be sustainable as the year goes on. They are also dealing with their goaltenders having a .880% save percentage at five-on-five and that should creep up over .900 as the season goes on. With those numbers, they have outscored their opponents six to three when it comes to goals scored at even strength.
Their expected goals for percentage (65.15%) almost match the 2-1 ratio that they are scoring at. The line has been excellent at pushing the puck up ice and keeping it in the offensive zone for long periods of time. The trio is finding space in the offensive zone, and Hoglander’s vision and passing ability is a great match with Horvat and Pearson’s skill on the boards and knowledge to go to the net with their stick’s on the ice.
There’s a lot to like about this trio early on this season and if the chemistry continues to grow, they will continue to produce at a high-end second line rate.
It’s great to see Horvat finally have two top-six wingers on his sides. With Pearson on the final year of his contract and Vasily Podkolzin on the way, there is reason to believe that Horvat will finally have quality wingers for years to come with the young European wingers hopping on the scene. For now, Pearson has been a fine fit for Horvat and we will see that trio stick together for the time being. Pearson may re-sign in Vancouver after this season, but if he (or Jim Benning) can’t come to terms on a new contract, the Canucks should know that Podkolzin is on his way soon and he will be like a blank scrabble piece that you can add to any line.
With The Lotto Line slumping, the captain and his wingers have carried the weight for control of the goal share in the top six. The Lotto Line will get back to scoring goals, as they are too good for it not to happen.
For the time being, ride that Pearson-Horvat-Hoglander line while they are hot.
Do we need a nickname for that line? Any suggestions?
Uncategorized
Recent articles from Faber