Easing up Bo Horvat’s deployment, an ongoing struggle for the Canucks, should continue to be a priority 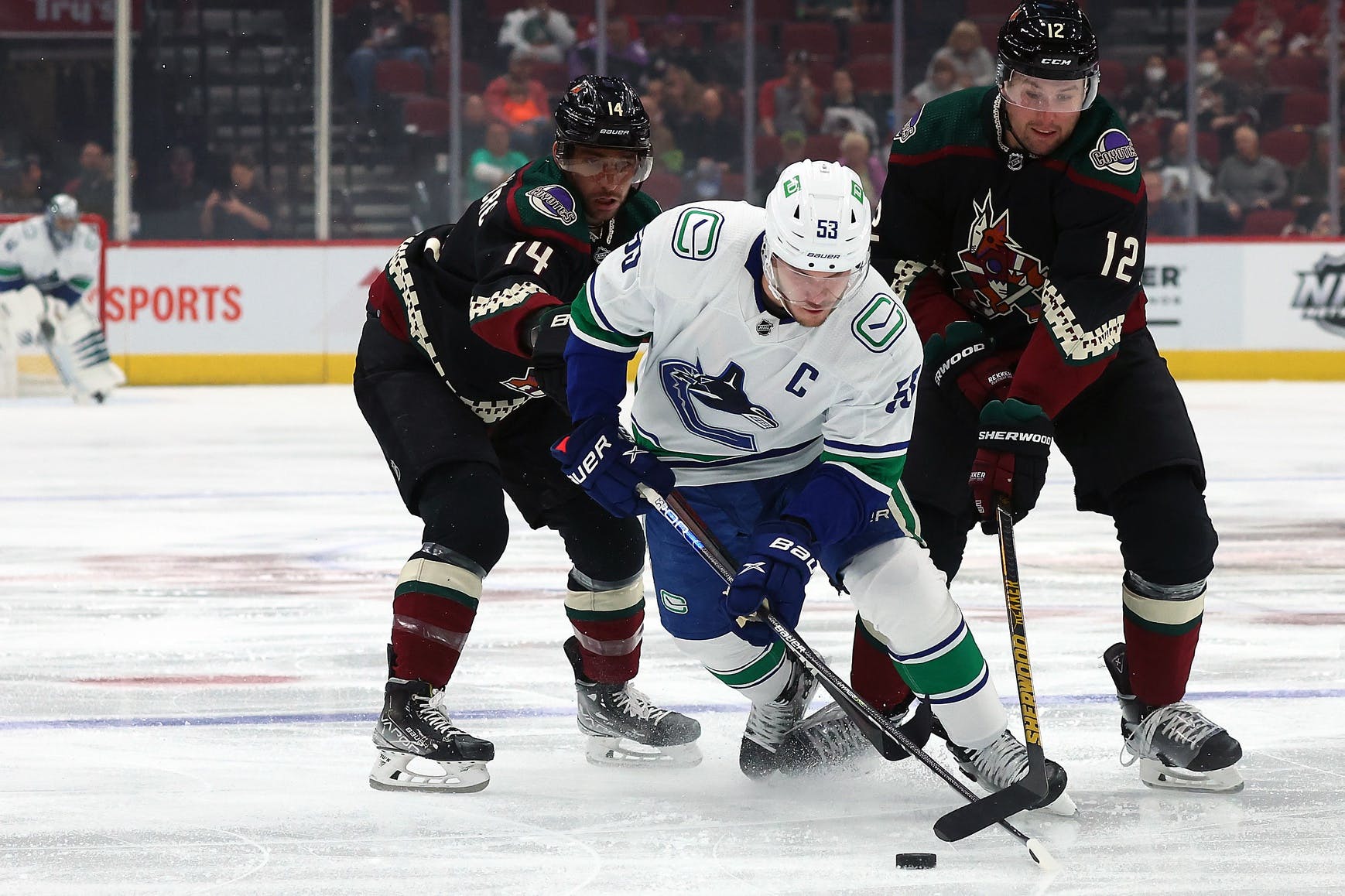 By Stephan Roget
6 months ago
It used to be a bit of a local myth that Bo Horvat was destined to one day develop into Patrice Bergeron 2.0.
Despite limited accolades regarding his defensive prowess following an OHL career that mostly saw him operate as a top-line center, reports of Horvat’s high character were somehow misinterpreted into a strong two-way reputation; one that followed him all the way to the NHL.
Horvat’s gameplay, at least at first, developed in a very different direction. His offensive play blossomed, his numbers steadily increased from year to year, and he started putting up production that was elite for a 2C and bordered on 1C quality.
Now, that would have been plenty for Horvat to rest his laurels on. Being a top-tier 2C is nothing to sneeze at, and plenty of players get by in such a role on the merits of their offensive instincts and little else. But Horvat is not that sort of person. Here, we see that maybe his work ethic being linked to some imaginary defensive skill in the past may have actually been more reasonable than it previously seemed because, just like with his once-criticized skating ability, Horvat has worked tirelessly to improve the quality of his play in his own end.
And here’s the kicker: these days, and as of last year specifically, Horvat is finally performing as a quality shutdown center, as we covered a couple of times in– and post-season…and no one seems to be talking about it anymore.
It seems that, after all those years of everyone just assuming that Horvat was effective defensively, it’s no longer much of a news story, even if he’s actually becoming effective defensively for the first real time in his career.
Which is a shame, really, because it’s something that Canucks fans should be discussing. In fact, what Canucks fans really should be discussing is whether or not the team has a plan to get Horvat out of his current, de facto shutdown role, and back into something that more suits his true nature as a high-scoring pivot.
In 2021/22, Horvat skated an average of 19:31 in ice-time per game. During those 19:31 minutes that were even-strength, Horvat started about 56% of them in his own end. Of those 19:31 minutes, more than two-thirds of them saw Horvat lining up against top-six opposition. 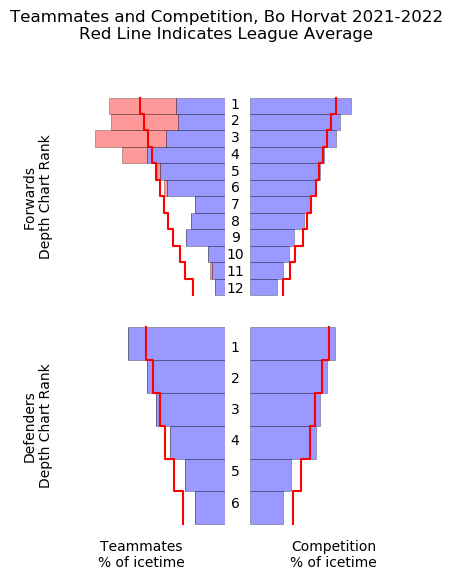 From HockeyViz.com
This wasn’t really the plan. Jason Dickinson was supposed to come in and start eating up some of that deployment. But he flopped, and Horvat stepped up. Which is nothing new. Horvat has been tossed into a shutdown role by default in several seasons prior to this last one, and he’s done his level best to perform.
Here’s the key difference: Horvat actually succeeded in the role in 2021/22. He broke even at even-strength. He posted some of the best possession and control metrics of his entire career.

From NaturalStatTrick.com, 5v5 statistics
And on top of all that, he notched 31 goals and 21 assists, good enough for a PPG of 0.74, tied for 43rd best among NHL centers.
In other words, Horvat was asked to perform the duties of both a scoring 2C and a shutdown center in 2021/22, and he did remarkably well in both roles.
This marks Horvat as a rare talent, and it undoubtedly was a positive for the Canucks last year. Remember that the Canucks ended the 2021/22 campaign with the eighth-fewest goals allowed in the regular season. Yes, that means that the understaffed Vancouver blueline overperformed to some extant. But the bulk of the credit for that stat should probably go to two non-defenders: Thatcher Demko and Horvat.
Horvat’s strong shutdown play from the front took a lot of pressure off the blueline on a nightly basis, until he was injured, at which point the whole team’s wheels seemed to coincidentally fall off.
And so, chances are pretty good that the Canucks can chuck Horvat into that exact same dual-role in 2022/23 and expect positive results. In fact, based on his continual career growth thus far, the Canucks can probably expect Horvat to do even better as a scoring shutdown center in 2022/23.
But is that really the best use of his considerable talents?
There can be no doubt that, despite achieving a career-high in goals last season, Horvat’s excessive defensive responsibilities limit his offensive freedom. If he can pot 30 while shutting down Connor McDavid and Johnny Gaudreau on a nightly basis, how many could he score if someone else were taking the hard shifts?
Horvat will be 27 when the season kicks off in October. He’s got three seasons left before he hits 30. This should be, and is, his offensive prime. Will he almost certainly settle down into a more dedicated, two-way role as he ages into his 30s? Definitely.
But are the Canucks missing out on an opportunity to properly utilize Horvat while he’s at his very best? Maybe!
The cold, hard fact of the matter is that it should be a lot easier for the Canucks to find someone capable of taking on Horvat’s defensive responsibilities than someone capable of replicating his offense.
The goal over the next couple of seasons should be to ease off the d-zone starts and tough matchups for Horvat, to continue to put him in more offensive situations, and to reap the benefits of having two or three extremely-potent scorers down the middle, which is every hockey team’s dream.
The pieces are in place. As of 2022/23, Horvat could find himself winged by some combination of Brock Boeser, Conor Garland, Vasily Podkolzin, Andrey Kuzmenko, Nils Höglander, Ilya Mikheyev, or his old pal Tanner Pearson. He’s never been surrounded by such offensive talent.
Horvat will also be skating into a Pacific Division that’s weaker than ever. The chance for some truly eye-popping numbers exists.
If so, his line combos will look significantly more offence-friendly than they did in 2021/22.

From Dobber’s Frozen Tools
But those defensive minutes are going to have to be taken by someone, and that’s the rub.
The Canucks are not without options.
Jason Dickinson is still around, and there’s no reason not to give him another try in a shutdown role.
Curtis Lazar and Dakota Joshua have each been added to the mix, and will each be expected to at least try-out some top-six matchups.
Johan Larsson, a veritable black-hole of a hockey player who ensures that nobody, teammates or opposition, scores while he is on the ice, is still available as a UFA.
There’s even the possibility of sliding some of those tougher deployments over to Elias Pettersson, a fine two-way center in his own right.
Or, if the Canucks want to get really creative, they could experiment with converting Vasily Podkolzin over to center and seeing if he can pick up some of the shutdown game. He certainly seems built for it.
And if all that fails? At least we know that Horvat is still ready and willing to perform whatever job the Canucks ask him to, even if that ends up being multiple jobs at the same time, without complaint.
Ultimately, for the captain, what’s best for the team will always take priority.