Danila Klimovich shines and Lucas Forsell speaks about high hopes in the SHL next season: Scenes from Canucks development camp 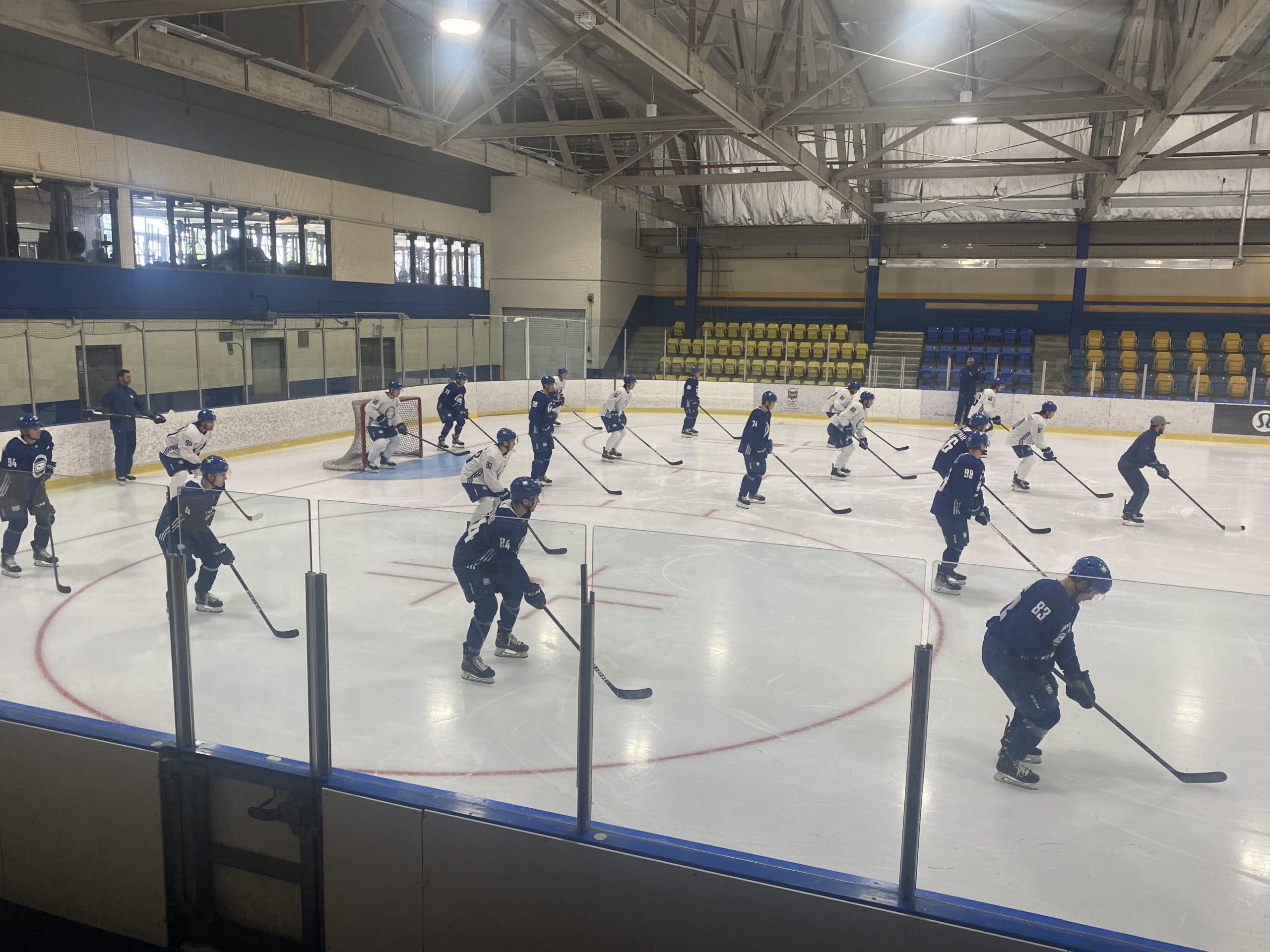 By Faber
6 months ago
Day two of Canucks development camp took place Tuesday morning with the forwards taking the ice first, followed by a full roster skate, and closing out with the defencemen getting some ice.
The first hour gave us a chance to see the forwards show off their shots with a lot of fast-paced drills and a busy morning for goaltenders Aku Koskenvuo and Ty Young.
These two goalies were out early with goalie coach Ian Clark as they worked on their movement in the crease and installing Clark’s post integration concepts.
Koskenvuo spoke with the media after the skate and praised the work of Clark.
“Clarkie is the best I’ve ever had,” said Koskenvuo when asked about his goalie coach. “Everything is top notch and I feel like he really understands how all modern-day goalies should play. I think he’s approaching all of us as individuals and not just trying to (teach) a certain form on all of us. He’s individually trying to develop all of us. So, I think that’s great.”
He also mentioned that he is excited for the next level of hockey this fall as he moves to the NCAA to attend Harvard. Koskenvuo wants to show up there and fight for the starter’s job but knows that the NCAA is a tougher league than the Finnish J20 league that he played in last season.
He also wants to work his way towards being the goalie for Finland at this December’s World Junior Championships.
“I’m definitely looking forward to try to break into the team,” said Koskenvuo. “I’ve just got to go day-to-day and see if I get there but I’ve just got to keep on focusing on the everyday stuff. And if I get there that’s a really big reward, but right now, I’ve just got to concentrate on everyday action.”
Even though it’s just been drills up to this point, we have liked what we’ve seen from the WHL’s leading scorer, Arshdeep Bains. His pace looks strong in drills, he’s got some strength but the trait that has impressed us the most is his consistency.
Bains seems to get good wood on every shot that he takes and is able to receive passes with ease, even when they are in his skates or behind him.
It’ll be interesting to see how the Surrey-born Bains translates his game to professional hockey. We have liked his play early in camp and are expecting him to be an AHL contributor from day one out in Abbotsford.
We were keeping our eye on the two big shooters at camp. Aidan McDonough and Danila Klimovich both have heavy shots that really pop compared to the rest of the roster, and they were letting those shots go on day two.
There’s a real heaviness to the puck when it comes off of McDonough’s stick. He is able to fire shots that get a piece of the goalie but still find the back of the net.
McDonough is returning to Northeasten for his senior year this fall but plans to sign with the Canucks at the conclusion of the NCAA season.
Klimovich was lighting it up on day two. His shot had good pop on it and really stuck out compared to the rest of the prospects.
Consistency has been our biggest worry for Klimovich but he was consistently impressing us on day two.
We also spoke with forward Lucas Forsell about his goals for next season and how he wants to be an impact player in the SHL as an 18-year-old.
“I want to be our productive player,” said Forsell when talking about his goals for the SHL this coming season. “I want to take a spot on the 12 forwards, maybe on the top three lines as well. The only thing I can do is prepare myself for the season as much as I can and work hard. I also want to be a player that the coach can rely on.”
Forsell mentioned that because of the travel, he felt a bit rusty on day one of the camp but began to loosen up on day two. He looks like he needs to add some size and muscle before the conversation about him coming over to North America begins. The good news is that he is very skilled, quick, goes to the net hard, and has a good release on his shot.
You could see the players had shaken off a bit of rust on day two and the pace definitely picked up from what we saw on day one.
We will be back for day three to see who stands out and are expecting to see a scrimmage on Thursday that should be very exciting and will help set a measuring stick for the Canucks’ top prospects.
If there’s a name you want to hear more about, let us know in the comments and we will focus on that player as the week goes on.
See you tomorrow for a recap of day three.
I spoke further about what went down on day two in the video below!
Uncategorized
Recent articles from Faber