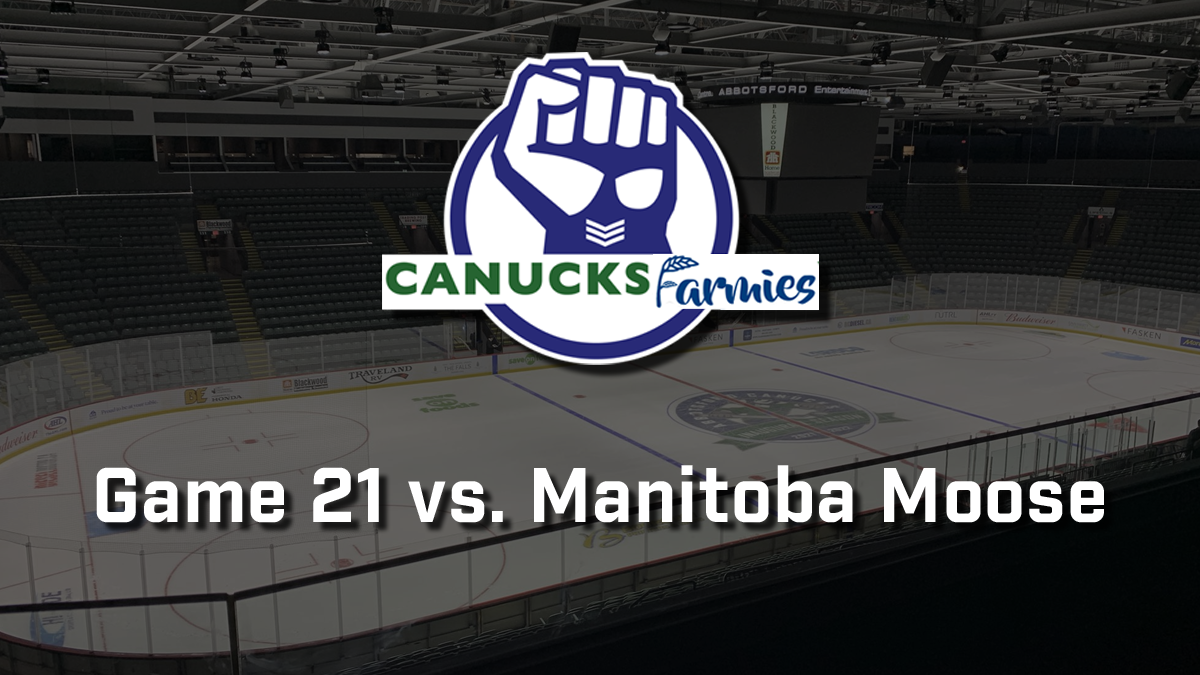 By Cody Severtson
1 month ago
For the second straight season, the Abbotsford Canucks are scheduled to play an eight-game series against the Manitoba Moose.
Last season, the Canucks dominated the first six games of the season series with a 4-0-1-0 record, outscoring the Meese 26-18.
Then, over their final two games against the Meese, the Farm lost by a combined score of 13-1 to close their season on back-to-back losses.
The bad vibes from that doubleheader finale against the Meese carried into the playoffs and led to an unceremonious first-round sweep against the Bakersfield Condors.
But on Friday night, the Farm scrubbed the memories of that terrible 2021-22 finish with a comprehensive 7-0 destruction of the Meese to extend their streak to five games in a row.

Starting the game for Abbotsford was the forward pairing of Linus Karlsson and Vinny Arseneau with centreman John Stevens. The duo have developed an unlikely chemistry over this recent homestand and built on it further, generating the first salvo of offence during the opening minute.

A simple board-and-out from Arseneau led to a misplay at the blueline by the Manitoba Moose, allowing Karlsson to sweep down toward the right circle for the first shot of the game.
Moments later, after several icings, the Farm struck first, with Lane Pederson scoring his 12th goal in as many games!
Abbotsford Canucks goal: 1-0 Canucks
Lane Pederson from Phil Di Giuseppe and Jack Rathbone

Jack Rathbone picked up his first point of the season with a clean exit pass to Pederson in the neutral zone. The Farm’s efficient east-west movement caught Moose’ netminder Oskari Salminen cheating toward his right post. Di Giuseppe then landed a perfect pass off Salminen’s left post, rebounding to Pederson for his first goal of the night.
Not long after, Will Lockwood put the Canucks into penalty trouble, taking a hooking penalty while forechecking in the offensive zone a little too aggressively.
PK1: Juulsen, Brisebois, Stevens, Wouters
PK2: Pederson, Dowling, Woo, Wolanin
PK3: Podkolzin, Stevens,
Abbotsford’s 27th-ranked penalty kill held the Moose to zero shots on goal, with Vasily Podkolzin generating the best scoring chance of either team during his first real look on the PK.

Because of the early penalty kill, Danila Klimovich didn’t see his first shift of the game until the four-minute mark. The time spent on the bench didn’t hamper Klimovich’s improved form of late, engaging in a puck battle, cycling the puck back to the D, moving down the wing for a scoring chance, and racing back to the d-zone to deny a Manitoba two-on-one opportunity.

After Silovs’ denied the two-on-one chance, Klmovich even won the d-zone faceoff to spark an end-to-end rush for his linemates!
Five minutes into the frame, Christian Wolanin stayed hot, drawing a holding penalty against Nichols Jones to hand the Canucks their first power play of the night.
You already know what I was about to type: it only took Abbotsford 33 seconds to capitalize, with Wolanin extending his point streak to thirteen games with a primary helper on Lane Pederson’s second goal of the night!
Abbotsford Canucks goal: 2-0 Canucks
Lane Pederson from Christian Wolanin and Justin Dowling

The thing we love to see on this goal: Pederson somehow finding space over 6’5″ Oskari Salminen’s left shoulder for the top-corner snipe!
Klimovich kept up his “little things” hot streak near the eight-minute mark when he chased down ex-Canuck Ashton Sautner deep into the Moose’s zone for a hard hit and puck retrieval.

While Klim’s backhand pass didn’t yield a shot on goal, it was exactly the kind of play he should make as the first man (F1) into the zone!
Vasily Podkolzin had a bit of a rollercoaster mid-period, sparking a breakaway for Phil Di Giuseppe before taking a hooking penalty while defending an odd-man rush.

It was a pretty soft call, to be fair.
Fortunately, the Canucks penalty kill came up huge again, holding the Meese to a single shot on goal over two minutes!
After leaving the box, for the first time in probably seven or eight years, Podkolzin played selfishly inside the offensive zone.

KHL-Podkolzin would have never been allowed to drive on goal with a passing option available. Playing selfishly had never been an option for Podkolzin in his pro career until now. Podkolzin’s quick acceleration was enough to slip past his check for a backhander on the net, and the rush chance even prompted a rebound for Di Giuseppe. More selfish-Podz, please!
He’s a peacock; you’ve got to let him fly!
Not wanting to be outdone by Klimovich’s ‘little things’ or Podkolzin’s ‘selfishness,’ Linus Karlsson put on a show with a perfect mix of both to put the Canucks up by three.
Abbotsford Canucks goal: 3-0 Canucks
Linus Karlsson unassisted

The board battle! The evasion along the boards! The cut through the slot! The shot on goal! Just a marvellous solo effort from the rookie!
Podkolzin returned to his playmaker ways on a two-man rush with Justin Dowling, only to send his one-timer shot high and wide of the net.

Tsk tsk tsk, unselfish-Podkolzin. have we learned nothing?!
With three minutes left in the period, a long shift for the Klimovich-Wouters-Nielsen trio resulted in Klimovich’s third goal of the year, extending his point streak to five games!
Abbotsford Canucks goal: 4-0 Canucks
Danila Klimovich from Chase Wouters and Tristen Nielsen

The GIF doesn’t cover it, but Klim’s goal off Wouters’ neutral zone steal and zone entry came after an extended shift inside the Moose’s end. A great hard-working shift for the young trio, a great pass from the Captain, and a fantastic display of patience by Klimovich to create the opening for the goal.
After twenty minutes, the Canucks had outshot the Moose 14-7.

Abbotsford caught Manitoba sleeping early into the second period, with Karlsson sprung on a breakaway off a neutral zone turnover.

Karlsson wasn’t able to generate a shot on goal. But, moments later, Karlsson drew an elbowing penalty against Kevin Stenlund to give the Canucks their second power play of the game.

PP2 spent nearly the entire two minutes on the power play, with PP1 coming out for a brief 20-second man advantage.
Not long after the expiry of the Canucks power play, Noah Juulsen took an interference penalty to give the Moose a two-minute power play opportunity!
After another uninspiring Meese power play, the Canucks found themselves on another power play. This time, Tristen Nielsen drew a cross-checking minor against Stenlund after some post-whistle brouhaha-ery.

Though the Canucks’ PP1 spent most of their power play inside the offensive zone, Will Lockwood was the only player to record a shot on goal, a turning one-timer from the slot.

Jack Rathbone had a golden scoring chance while quarterbacking PP2 but ripped his shot off the post and wide.

When the game returned to 5v5, the hockey gods did their best to convince Podkolzin to stop playing selfishly.
For the second time in the game, Podkolzin elected to make the selfish play: cutting down the right wing off a zone entry for a shot on net.

Naturally, Podkolzin’s shot caromed around the boards to the Canucks’ blue line for Brad Lambert, who Arturs Silovs promptly stonewalled on his breakaway chance.
The sequence was so very “Canucks luck” for Podkolzin.
The unfortunate casualty of the prolonged run of special teams time was Danila Klimovich, who only saw a handful of shifts in the third after the opening 10 minutes of alternating power plays.
Klim took his first 5v5 shift late in the period, where he looked a bit more like the Klimovich of old: a little disengaged, meandering around the d-zone. Not sure if he can be faulted for the lethargic shift as he’d gone a considerable amount of time between shifts.
After twenty minutes, the Canucks had spent the bulk of the period inside the offensive zone but finished the period down in shots 10-6.

Klimovich looked much fresher to start the third period. After working to clear the d-zone, Klim showed considerable pop in his skating as he worked around the neutral zone as the F1.

Early into the third, the Canucks ran into some trouble inside the d-zone as they struggled to gain control of the puck.
The Moose’ sustained pressure in the offensive zone was only broken up after Vinny Arseneau flatlined rookie Brad Lambert at the Canucks’ blue line.

Arseneau would answer the bell against Manitoba’s Evan Polei for “code reasons.”

The hit on Lambert and the ensuing fight tilted the ice heavily in the Canucks’ favour.
After Arseneau and Polei’s fight, the Canucks outshot the Moose 9-1 and outscored them 3-0, despite giving up a fourth power play opportunity.
Abbotsford Canucks goal: 5-0 Canucks
Will Lockwood unassisted

Sensing the hockey gods’ disproval of Podkolzin’s selfish play, Will Lockwood tested fate with an incredible solo effort to make it 5-0 for the home team.
Things to love about the goal sequence: Lockwood picking up his pass attempt in stride at the Moose’ blue line, slipping the oncoming forward, deking around the defenceman on his backhand before flipping to his forehand for a top-corner snipe over Salminen’s glove side.
Di Giuseppe took a penalty for hooking soon after Lockwood’s goal, but the ice was tilted entirely at this point.
The Canucks PK blocked shots and kept Silovs’ workload incredibly light over the final twenty minutes, earning the Latvian netminder his first shutout of the season.
Not long after killing off their fourth penalty, Will Lockwood decided to take the game into his hands for the second time in the period to make it 6-0.
Abbotsford Canucks goal: 6-0 Canucks
Will Lockwood from Justin Dowling and Jack Rathbone

After dangling Ashton Sautner for a drive toward the slot, Lockwood appears to put the puck off Salminen’s pads, off a Moose’ defender’s skates and into the net.
Rough for Salminen; Great for Lockwood!
Salminen’s night kept getting worse to boot.
The team in front of him effectively stopped playing while the Canucks continued to outwork their opponents. The “DAWG line” of Nielsen-Wouters-Klimovich put on a show inside the offensive zone, culminating in a spectacular behind-the-back pass from Klimovich to Nielsen for his first goal at 5v5 this season!
Abbotsford Canucks goal: 7-0 Canucks
Tristen Nielsen from Danila Klimovich and Chase Wouters

Following their incredible effort on the 7-0 goal, the DAWG line earned PP1 reps after Manitoba’s Tyler Bauer took a roughing minor with 2:12 remaining in the game.
PP3: Nielsen, Klimovich, Kalynuk, Wouters, Brisebois.
The DAWG power play group generated one shot attempt total before Arseneau, Rathbone and Juulsen subbed on for Wouters, Kalynuk, and Brisebois.
The “everybody gets a turn” power play groupings failed to generate any serious scoring chances.
But it didn’t matter.
It was a blowout.
The coaches had fun, the players had fun, and the Abbotsford faithful had fun as the home team made it five straight for the first time this season!
Scoresheet
Abbotsford Canucks defeat the Manitoba Moose 7-0

The Farm runs it back against the Meese to close their six-game homestand tomorrow at 7 PM.
Editorials
Recent articles from Cody Severtson