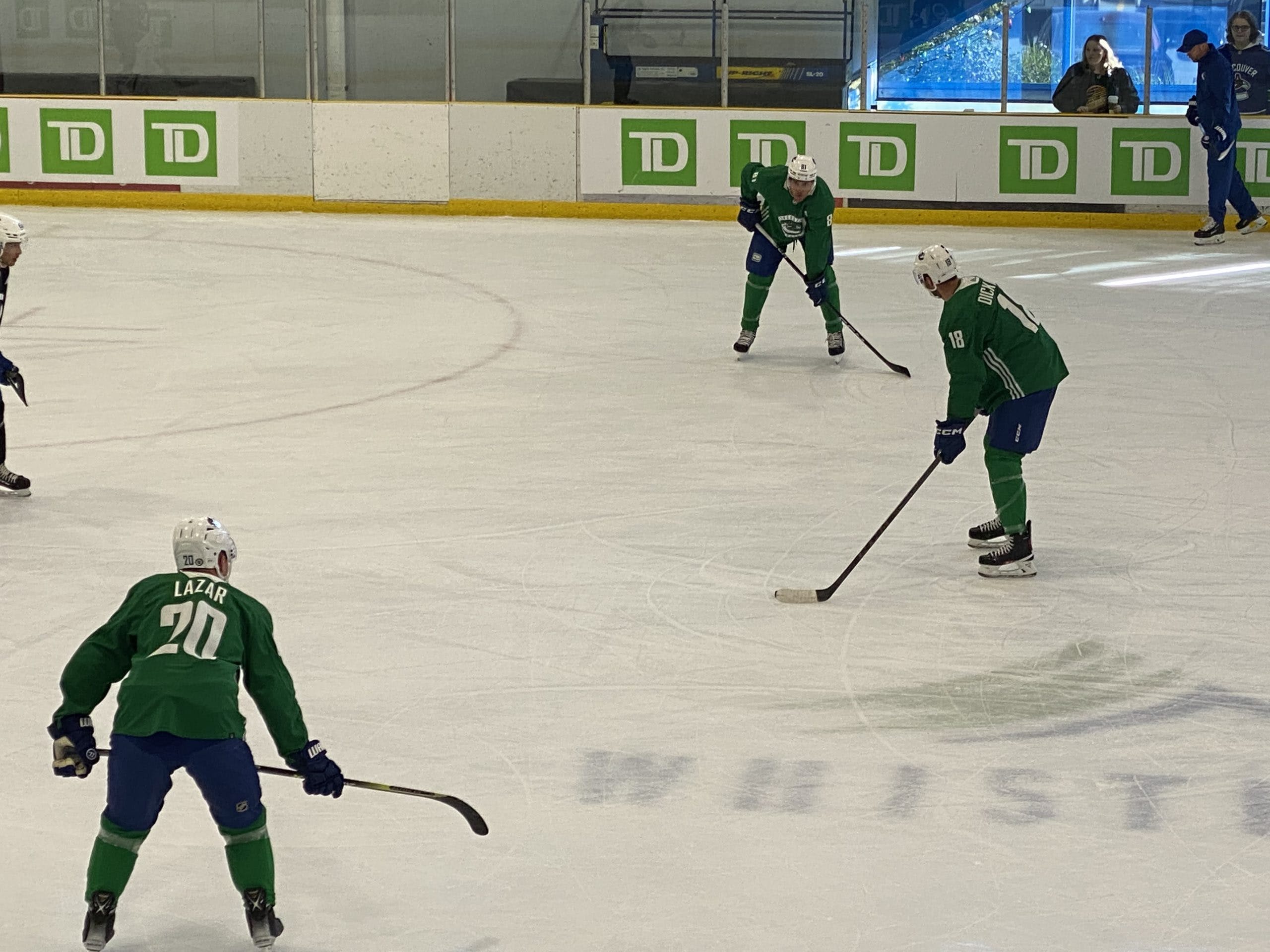 By Faber
2 months ago
You never want to rely on your fourth line.
But when a team is in a funk, a fourth line can act as a defibrillator of sorts, and bring a team to life.
If the Canucks are going to take a step and become a playoff team, they are going to have to find chemistry throughout the lineup. The top-nine has been talked about ad nauseam this offseason and for good reason — having J.T. Miller, Elias Pettersson, and Bo Horvat down the middle sets any team’s forward group up for success. You’re looking at a proficient top end of your lineup when you add talented wingers like Brock Boeser, Conor Garland, Vasily Podkolzin, and more, it becomes even more lethal.
We are going to see a lot of offence from the Canucks but one thing that’s been missing for quite a while is a fourth line that can grind away opponents and make every game against the Canucks a tough night.
Curtis Lazar and Dakota Joshua were added to this team through free agency and have qualities that the team has been lacking for years.
Joshua has the size and speed that any team would love to have at the bottom of their lineup. He spoke about what he and his line wants to bring to a lineup this season.
“A shutdown line that makes it very tough for other opponents to do what they want to do,” said Joshua when asked about what his current line wants to accomplish. “And hopefully, put the other guys in better positions to succeed. That’s the main goal and that’ll be our job if we are together.”
Lazar seems to have the same mindset and knows the role that he is going to be asked to fill. He was drafted in the first round of the 2013 draft and has made the necessary changes to his own playstyle to be able to extend his NHL career.
“I know for myself, [I was a] first-round pick and you’re drafted to score goals, [that] didn’t quite work out for me,” said Lazar with a smile. “It took me a couple of years to kind of realize if I want to stick around, let’s find something else and get really good at it. I’m going into my ninth year now and I think I found that role.
“It’s that foot soldier mentality.
“It’s the stats that aren’t going to show up on the scoresheet but they go a long way in the dressing room, the character stuff.
“Whatever is asked of me, I’m going to do it.”
There’s no lack of skill in the Canucks’ forward group. The fourth line is going to be like a pitcher throwing a change-up pitch.
It’s going to be three guys coming over the bench just like the top lines but just like a batter facing a change-up, the opposition is going to have to deal with a much different pace.
“You look at the game now and just know how fast it’s getting, and how skilled it’s getting,” said Lazar. “Regardless [of] who I’m playing with, it’s that simple style, but it’s effective. You get pucks in deep, you wear them down, and you get the crowd involved if you’re playing at home. Maybe we get the chance to match up against other team’s top lines and wear them down, just be hard to play against, and ultimately be responsible defensively because that’s the key moving forward, keeping the puck out of your net.”
Lazar is one of the most physical forwards in the NHL and he is even more aggressive when playing on the wing. Last season, Lazar finished the season 15th in the NHL when it came to hits thrown per 60 minutes. We all love how much Luke Schenn throws the body around and Lazar finished just one spot behind Schenn.
Out of those skaters who finished top-15 in hits per 60, Lazar was first in individual scoring chances per 60, second in shots per 60, and fourth in points per 60. He is one of the top initiators of physicality in the NHL but also has good enough hands to get scoring chances with consistency. 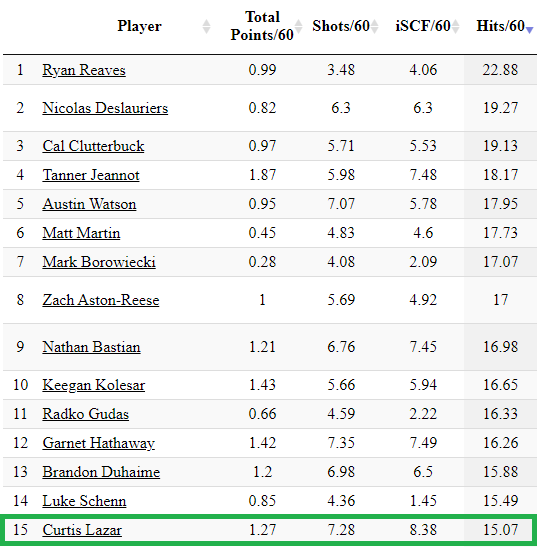 Stats provided by NaturalStatTrick. (Minimum 500 minutes at five-on-five)
Lazar has the potential to be that lovable fourth-liner that Canucks fans tend to gravitate towards. It just happens to be a bonus that he is a BC-born player. He even commented on growing up as a Canucks fan who now gets to make an impact on the team he rooted for during his childhood.
“Everyone’s got their opinion,” said Lazar. “As a fan, I now have an opportunity to do something about it.”
Joshua is also beginning to enjoy playing with Lazar. He had a smile on his face when asked about playing with a player who initiates contact as much as Lazar.
“[Lazar] is a big boy that likes to throw his weight around,” said Joshua. “He’s fun to watch and it’d be really exciting if we get the suit up together.”
When it comes to physicality, Joshua is no slouch in his own right. Standing at 6’3″ and weighing in over 200 pounds, Joshua didn’t qualify for the list presented earlier in this article but threw 18.5 hits per 60.
These two players are going to be rattling the boards at Rogers Arena all season long and their mindset of wearing down opponents is backed up by their hits statistics.
Now, no line just has two players on it. The third man in on this trio through training camp has been Jason Dickinson, who’s coming off a season where he struggled with a couple of minor injuries and struggled to find a spot where he fit in the Canucks’ lineup.
Now, there are two new bodies coming in and the hope is that he can find a way to show his strengths in a fourth-line role.
Yes, Dickinson is paid too much to be a fourth-line centre. He is currently in year two of a three-year deal where he carries a $2,650,000 cap hit.
There was such praise for Dickinson’s defensive play in his seasons with the Dallas Stars. He was part of a shutdown line that helped Dallas reach the Stanley Cup Finals during the 2019-20 season. Dickinson was playing on the Stars’ second line and being effective in a very tough role.
The potential for a bounce-back is there with these two new wingers but there is also a chance to put together the Ferrari of fourth lines.
Nils Höglander.
Lazar and Joshua have both spent time at centre in the past. Lazar took 278 faceoffs in 70 games last season while Joshua has won 55.4% of his 139 faceoffs over his 42 NHL games.
There’s potential to see a fourth line that is driven by high-speed aggressiveness and sneaky offence. Lazar could play centre with Joshua and Höglander being the wingers who surround him.
Höglander may be on the outside looking in when it comes to the top-four line combinations but this situation provides another opportunity for him to get into NHL games.
Who knows, maybe he will like being a part of the hit parade?
There are some options as to what the Canucks’ fourth line will look like but it’s clear that Joshua and Lazar are going to be a big part of changing the culture in the bottom part of the Canucks’ lineup. These two are hungry and have the ability to spark the stars to play their hearts out when they see the effort level that the newcomers are bringing on a shift-to-shift basis.
Content
News
Recent articles from Faber