Could Vasily Podkolzin at centre be the answer to making the Canucks’ top-nine work? 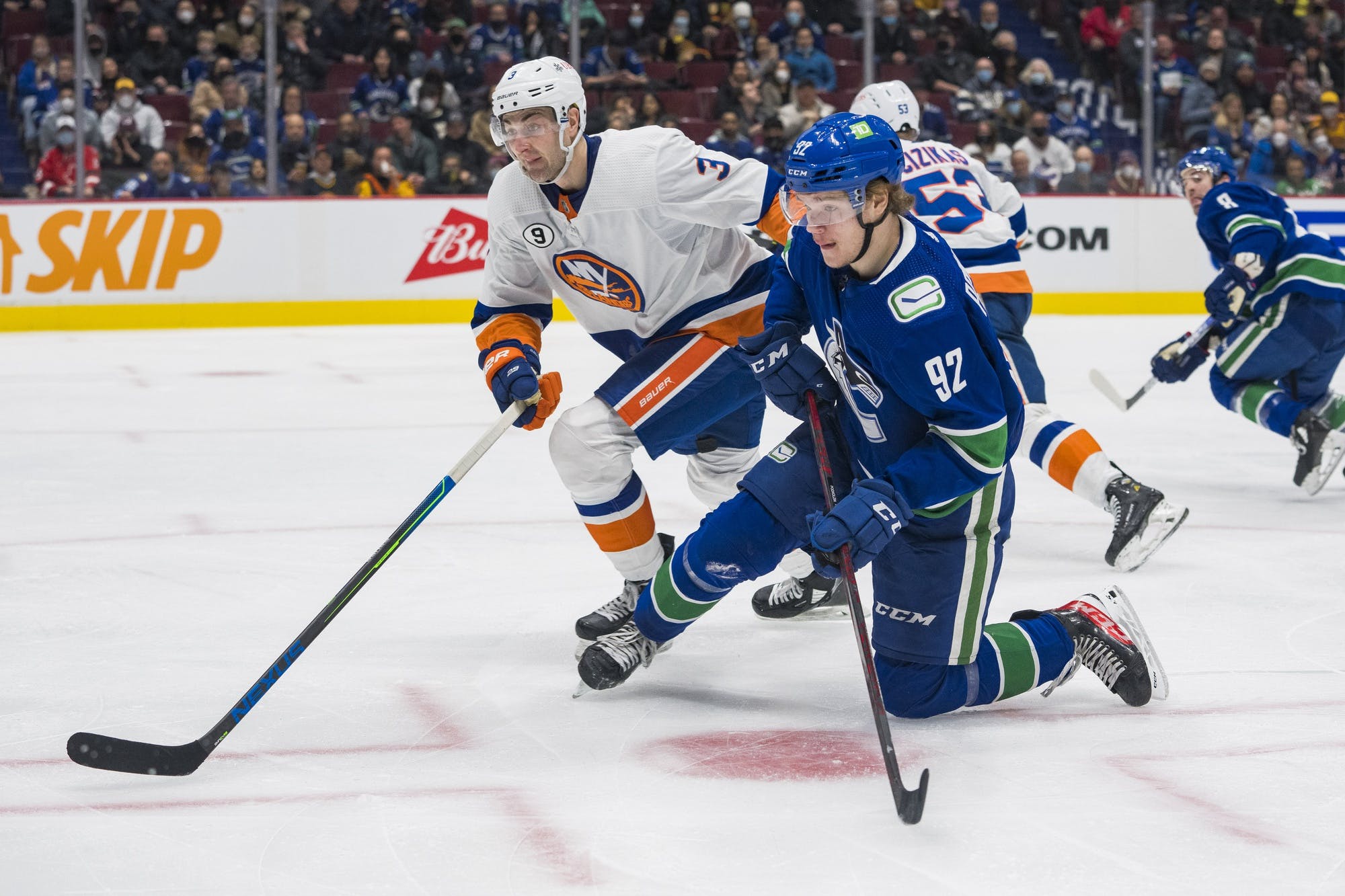 By Stephan Roget
5 months ago
With no trades on the horizon as of yet, the Vancouver Canucks are currently slated to skate into the 2022/23 season with an absolutely overloaded forward corps.
Elias Pettersson, JT Miller, Brock Boeser, Bo Horvat, Conor Garland, Vasily Podkolzin, Ilya Mikheyev, Andrey Kuzmenko, Tanner Pearson, and Nils Höglander are all looking for time in the top-six. That’s ten forwards competing for six spots, and then you’ve got Curtis Lazar, Dakota Joshua, Jason Dickinson, Will Lockwood, and more in the mix for the bottom-six.
In a vacuum, having too much talent at forward shouldn’t be a bad thing. But under the auspices of a salary cap, and given the comparative weakness of Vancouver’s blueline, it’s a luxury that the Canucks can’t really afford. Ideally, they’d be able to shuffle a forward or two out, shuffle a defender or two in, and call it a day. But it’s never quite so simple.
Removing a key forward is going to upset chemistry in some way. And if that forward is JT Miller or Conor Garland — the two most rumoured trade-chips and the Canucks’ two most effective forwards at 5v5 last season — the Canucks are going to be scrambling to fill a massive gap with existing talent.
Enter: Vasily Podkolzin, third line centre?
The idea of moving Podkolzin to the middle of the ice has come up before, but never very seriously. After all, last season was the 21-year-old’s first in North America, so the focus was entirely on his adjustment. Now that he’s got a whole year of looking more-and-more comfortable under his belt, however, maybe it’s time to experiment.
On the surface, Podkolzin has a lot of what NHL teams might be looking for in a middle-six centre. He’s got size and serious power. He’s an effective enough skater, if not a major accelerator. He’s defensively responsible and always able to view the ice from a two-way perspective. He’s an adept playmaker, a lot to handle in front of the net and in the slot, and he’s getting better at using his teammates well.
For a while there, Podkolzin also looked like he was going to be a faceoff stud, winning his first three big league draws. He finished the season at 8/19 on the dot, but the potential is still definitely there for Podkolzin to become more adept. His hands are the rare combination of enormous and quick, which combined with his big body are essentially the holy trinity of winning faceoffs.
Of course, someone will have to teach Podkolzin how to win draws, in addition to all the other intricacies of playing centre. It’s something he’s done sparingly in the past, almost always when playing for the Russian national team.
There were even instances last season in which Podkolzin had to do a little bit more down-the-middle work than usual while on a line with winger-esque centre in Pettersson and Dickinson. While not on the scoresheet, he’s already effectively tried out some aspects of the centre position at the NHL level already, and succeeded.

From Dobber’s Frozen Tools
But here’s the key trait that might separate Podkolzin from the average winger-attempting-to-become-a-centre: he’s incredibly teachable. Throughout his career, Podkolzin has earned high praise for being a fast and eager study of the game, and that was apparent last season in both his ever-improving on-ice play and his off-ice grasp of the English language.
Almost every coach who has had the pleasure of working with Podkolzin have spoken to his humility and moldability. And we know that the Canucks’ staff, in specific, believes that it’s at least possible for a big winger to transition to center, based on their floating the idea by Juraj Slafkovsky in the pre-draft interviews.
The learning curve going from winger-to-centre would be high. That’s why few ever make the transition. But if anyone were going to handle that learning curve, Podkolzin certainly has the right attitude and demeanour to pull it off.
Really, is there any harm in trying? Because the benefits could be considerable.
As a centre, one has to imagine that Podkolzin would be used in semi-frequent matchups against top-six opposition, particularly against those teams with more sizeable centres. In doing so, he’d take a little bit of responsibility away from Bo Horvat and open up more offensive opportunities for the captain.
Let’s imagine, for a moment, that Miller is traded away at some point between now and the 2023 Trade Deadline, and that no forwards of note join the team in the interim. Could something like this work?
Kuzmenko-Pettersson-Boeser: A highly-skilled and tenacious top line.
Mikheyev-Horvat-Garland: A second line that is impossible to contain.
Pearson-Podkolzin-Höglander: A responsible third line with plenty of offensive pop.
Lockwood/Dickinson-Joshua-Lazar: One of the best fourth lines in the game.
If the Canucks do end up down a centre, it’s hard to imagine a better fit than Podkolzin at this exact moment. Jason Dickinson has been tried in that role and has failed. Curtis Lazar and Dakota Joshua are options, but their profiles are far better suited for an energy line. Spending any assets on additional forwards is probably to be avoided right now.
Anytime the solution to a roster problem can be found in-house, it has to be considered a win, and the Canucks could be sitting on a major win in Podkolzin’s apparent centre potential.
And if it doesn’t work out? If Podkolzin attempts to switch over to centre, but doesn’t succeed?
Oh well. We guess the Canucks will just have to be satisfied with Podkolzin remaining in his current state as an all-around top-six-quality power winger.
Tough break.