Could Lane Pederson stick around with the Vancouver Canucks?: Canucks Conversation Dec. 28 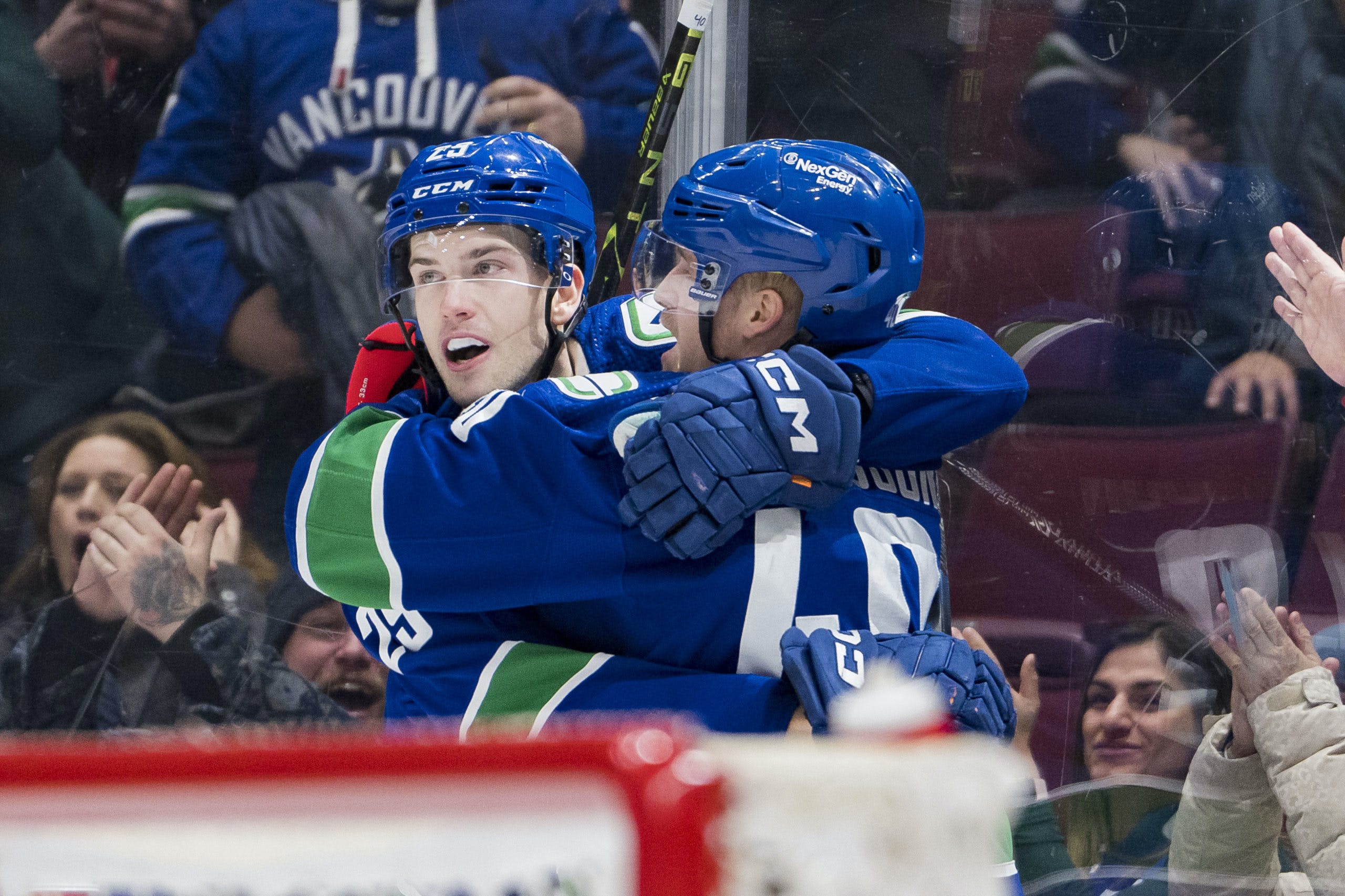 By David Quadrelli
1 month ago
To this point in his career, Lane Pederson’s NHL career hasn’t amounted to much.
After going undrafted, the Arizona Coyotes signed Pederson out of the WHL on the heels of a 65 point campaign with the Swift Current Broncos in 2016-17.
Pederson played three full seasons in the AHL before ever getting a cup of coffee in the NHL during the 2020-21 season, when the Saskatoon product appeared in 15 games with the Coyotes.
Then during the 2021 COVID-impacted season, Pederson inked a two-year deal with the Sharks. In his first season with the Sharks, Pederson tallied two assists through 29 games played.
Put it all together, and Pederson had tallied just a goal and four assists through 44 games. Those numbers don’t jump off the page and scream “capable of playing in an NHL team’s top six,” to say the very least.
But after a trade to the Canucks where Pederson was a throw-in piece from the Carolina Hurricanes in the deal that sent Ethan Bear to Vancouver, the 25-year-old centre really started to find his stride in Abbotsford.
Pederson’s opportunities with the Abbotsford Canucks were aplenty under head coach Jeremy Colliton, as Pederson was a regular fixture on the AHL Nucks’ first line, penalty kill, and power play. This increased opportunity led directly to Pederson tallying 17 goals and seven assists through just 18 games with Abbotsford, which as you may have guessed, caught the eye of the big club.
Originally called up as a backup option while Brock Boeser and Elias Pettersson recovered from illnesses, Pederson appears to have found a home playing alongside Pettersson.
In his first two games with the big club, Pederson — like everyone else on his team — didn’t do much to prevent back-to-back 5-1 losses at home.
But in the three games since? Pederson has lined up on Pettersson’s wing alongside Andrei Kuzmenko, and hasn’t looked out of place one bit.
Now, we’re not trying to suggest that Pederson’s success isn’t largely tied to playing with Pettersson, who is playing the best hockey of his life this season.
But you have to be able to finish to play with Pettersson, and you need to be able to think the game fast enough as well to keep up with Pettersson. Players will say it’s easy to play with a guy like Pettersson, and that’s certainly true. But there’s not much else that’s “easy” about playing and finding success in the NHL.
And through three games playing with Pettersson, Pederson has been more than fine, registering two assists and even scoring a goal. His play in transition and on the defensive side of the ice have been promising as well.
Pederson’s play of late got us talking on today’s episode of Canucks Conversation: Could Lane Pederson be here to stay with the Canucks?
Obviously he needs to do it over a larger sample size, but what we’ve seen from Pederson so far has certainly been promising and at the very least, he’s earned an extended look with Pettersson and Kuzmenko for the time being.
In the clip below, Faber recalled his recent conversation with Pederson about the opportunity he expected to get in the NHL with the Canucks compared to the one he’s actually gotten, and I talked about how Tanner Pearson’s return may affect the Canucks lineup.
Be sure to subscribe to the CanucksArmy YouTube channel!
You can catch the livestream of Canucks Conversation at 1 PM Pacific Monday through Friday on The Nation Network’s Youtube Channel here and the CanucksArmy Twitter account here. Clips of the show are posted daily to the CanucksArmy YouTube channel, which you can find by clicking here.
The show is also available in podcast format around 2 PM every day wherever you get your podcasts!
Shows
Recent articles from David Quadrelli