‘I think competition is good for a team’: A one-on-one conversation with Nils Höglander By Faber
2 months ago
After a down-year in his sophomore season, Nils Höglander is back to being 100% healthy and is ready to earn a spot in the Canucks’ top-nine forward group.
Höglander is coming off a season where he scored 10 goals and added eight assists in 60 games. This was a step back from his rookie season, where he finished the bubble year with 13 goals and 14 assists in 56 games.
The 21-year-old winger suffered a groin injury near the end of last season and worked hard in the offseason to make sure that he was back to full strength for the 2022-23 campaign. We caught up with Höglander on Wednesday afternoon after a summer skate session.
“I feel really good now,” Höglander told CanucksArmy. “I don’t feel anything on the ice. I’ve had a good summer, a lot of rehab, workouts, and skates. I’m feeling like I’m in really good shape. I’m excited to start.”
While most of the Canucks players saw a bump from the presence of Bruce Boudreau behind the bench, Höglander saw his minutes drop from 14:23 a night under Travis Green to 12:10 a night under Boudreau. As the minutes dropped, Boudreau was clear that he needed to see more from Höglander in the defensive zone.
Höglander took the guidance and wanted to prove to Boudreau that he was able to make the necessary changes.
“It’s always a little bit of a change with a new coach but I felt pretty good,” said Höglander. “Bruce [wanted] to change a little bit in my game, and I had to change. It was small things on defence and offence. Bruce had small things he wanted to change for me and I did my best to do that before I got injured.”
It’s clear that Boudreau wasn’t afraid to sit Höglander down on the bench if he wasn’t playing up to the coach’s expectations. In the first 25 games of the season, under head coach Travis Green, Höglander never once played less than 10 minutes a night. In the 35 games under Boudreau, Höglander played less than 10 minutes in seven games — 20% of his games under Boudreau.
To be a top-nine forward for Boudreau, Höglander needs to get back to creating offence at the level he did in his rookie season. At the same time, Höglander isn’t likely to be a 40-goal scorer, so he will need to prove to the coach that he can be relied upon in his own zone.
It’s going to be an uphill battle for Höglander to crack the Canucks’ top-nine. The team has added to their glutton of top-nine wingers with the additions of Ilya Mikheyev and Andrey Kuzmenko. Having a high effort level is not the question for Höglander, it’s more about how he plays in the defensive zone and limiting the mental mistakes. If Höglander can earn Boudreau’s trust in the defensive zone, then he will be able to get back to playing with the Canucks’ high-end forwards. If he is able to get back into the top-nine and play on some scoring lines, the hope is that he can get back to his scoring ways at even-strength that had Canucks fans so excited about his potential.
Höglander was one of the Canucks’ best forwards at creating offence in the 2020-21 season. 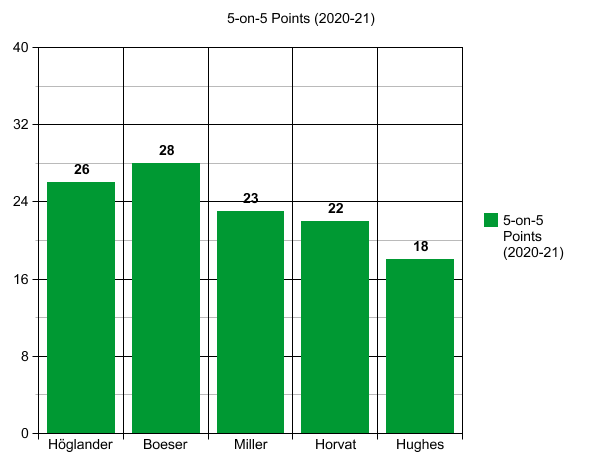 Over the past two seasons, no Canuck has a higher individual scoring chance per 60 rate than Höglander. He generates 9.32 scoring chances per 60 minutes at five-on-five. We have seen the offensive potential in Höglander’s game and he knows that this season needs to be a year where he gets back to what he does well.
“I just need to do what I’m good at, just what I did in year one and year two,” said Höglander. “I was unlucky last year to get injured and not play so much but I’m ready to show that I can take a spot. It’s nothing harder than that.”
On top of all the questions about Höglander’s spot in the lineup, he is also aware that he is heading into a contract year.
“It’s my last year on this contract and I know I have to step up and I’m ready to step up,” said Höglander. “It’s just exciting to do that. So, of course, I think about it, but I’m not a guy who thinks about too much.”
It’s going to come down to who looks the best at training camp and which players can help this Canucks team the most. Höglander is excited about the chance to battle for a spot in the lineup and believes that internal competition is key to a good team.
‪“Yeah, I’m really excited about that. It makes the team better to have good competition in the lineup. And everyone has to play their best. I think competition is good for a team. It’s good for myself and other guys too.”‬
The youngster had a big smile on his face throughout the interview and lit up when asked about being back with his pal Vasily Podkolzin.
“Being back at the rink is so much fun,” said Höglander. “This is what we all work for and now I’m here. I’m ready for a new season and am very excited. It’s going to be a lot of fun.”
There were some pretty plays between Kuzmenko and Höglander at Wednesday’s skate and Höglander has been out on the ice early every day to work with Ian Clark and the goaltenders.
We can see that Höglander put in the work this offseason to make sure that the injury that ended his previous season wouldn’t come into play for what happens this year. He admitted that the extra attention spent on his body due to rehabbing has made him strong and prepared for what is to come in the 2022-23 season.
He is locked in, had a great summer of working out and is mentally prepared for what is to come in the 2022-23 season.
“I had to watch the guys play last year and I was in the stands,” said Höglander. “I’m just so excited to be able to play again.”
Now, we will see what he looks like in training camp and if he can win the battle for a spot in the coveted top-nine of this Canucks forward group.