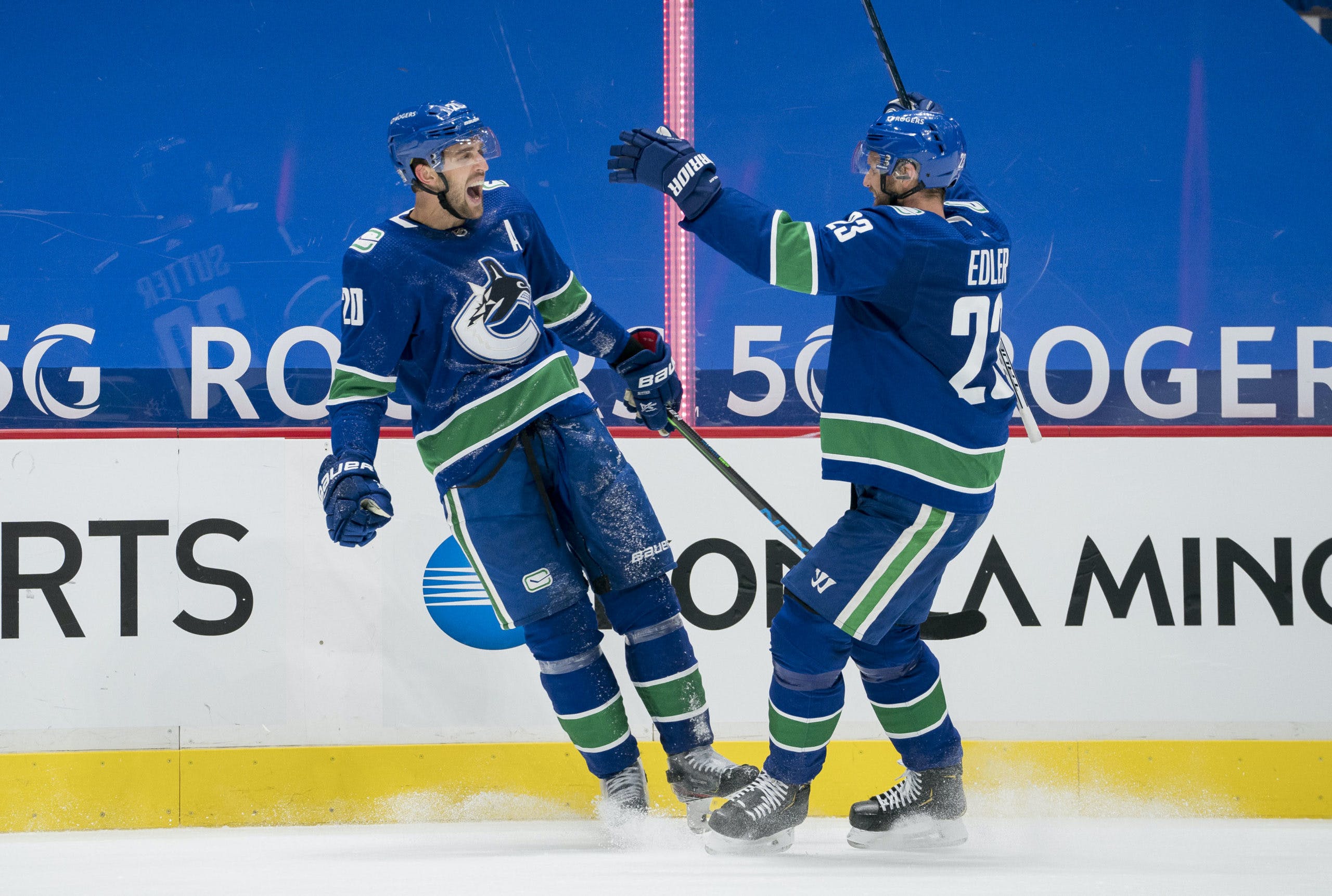 By Faber
2 years ago
The battle of the North Division basement kicked off as the Ottawa Senators travelled to Vancouver to take on the hometown Canucks.
It was over quickly as the Canucks scored early and often on their way to a 7-1 victory to set the tempo for this three-game series.
The Canucks came into this game with a 2-5-0 record. It wasn’t about the record though, it was about how the team was losing. They have been getting outplayed in roughly 80% of their periods of play this season. The team is at the bottom of the league in many of the defensive statistics and needed a mental reset before taking on the Senators for a three-game series.
During the pregame media availability, I asked head coach Travis Green about how this schedule can help teams reset and turn the page.
“I think it is. It’s going to be like that all season,” said Green. “We talked to our group this morning about that. Sometimes it’s going to be one game, sometimes it’s going to be a three-game series. For the most part, you’re going to play a team two or three times in a row and you’ve got to take what you’ve learned from the last series and move on to get ready for a new team.”
Green also went on to say that the first thing this team needs to do to look like they are turning things around is controlling possession. “Usually when we manage the puck and we execute with the puck, good things happen to our team,” said Green. “I’ve said this a lot over the years. When our execution isn’t sharp, dialled in and our passes aren’t on the tape or we don’t make good decisions with the puck, our game usually goes sideways and I think we’ve seen that a little bit.”
Green would go on to confirm that Thatcher Demko would get the start for the Canucks in this game while Matt Murray would be between the pipes for the Sens.
As for the lineup, there were a few shakeups with Adam Gaudette being held out for the second straight game. Gaudette practiced with the taxi squad earlier on Monday afternoon, meaning that the bottom six would be centred by Brandon Sutter and Jay Beagle once again. With Gaudette being scratched, that meant another entry into the lineup for The Big Fella, Zack MacEwen.
Beagle was rocking quite the bullet hole on his mouth after leaving practice early for stitches on Sunday.

Gaudette and Braden Holtby out, MacEwen and Demko in.
Monday’s game was a big one for the organization with their fans on a tipping point.
Pregames are for Always90Four, it’s postgame time.
Let’s go!

There was a tentativeness from each team early on in this game. The Canucks and Senators both have had their woes this season and likely had both head coaches hoping for a more defensive performance from their squads.
The Sens took to the power play first when Tanner Pearson took a hooking call just 2:43 into the game.
The Canucks did a good job killing the first penalty, not allowing any scoring chances. Antoine Roussel has been featured on the second penalty-killing unit alongside Sutter and he has looked right at home on the PK this season.
Roussel didn’t kill penalties last season but has added it to his resume after being a solid penalty killer in his career before joining the Canucks in 2018.
The Canucks broke the scoreless tie when Mr. Highlight Reel aka Brandon Sutter scored a backhand goal as he fell to the ice. 1-0 Canucks.
The Canucks were getting their sticks in lanes and disrupting the Sens in the offensive zone. It was the start that this team needed to set the tempo in their three-game series.
Tyler Motte pressured Thomas Chabot on the forecheck before sending the puck behind the net to Beagle and then Motte drove the net to score his third goal of the season. 2-0 Canucks.
The Canucks looked like a much better team in the first period. They were taking advantage of the Sens’ mistakes and for the first time all season, it felt like the Canucks were the team making fewer mistakes.
The Sens brought some pressure at the end of the period when they rang one off the crossbar during an odd-man break with three minutes left and then Demko came up huge with 20 seconds left when he stopped a Connor Brown breakaway attempt.
Though it felt like more, the Canucks outshot the Sens 12-10 in the first 20 minutes of play. It was a clean 20 minutes for the Canucks and they needed to build off that performance in the second period.

The Canucks went to the power play when Nils Hoglander was putting in work in front of the net and took a cross-check to the back. He gave a quick smirk to the Senator that cross-checked him because Hoglander is a physical freak and the Canucks were on to their first extra-man advantage of the game.
The first unit was on the ice for a full two minutes with plenty of chances but couldn’t bury their third goal of the game just yet. Elias Pettersson and Quinn Hughes were given tons of space as the Sens penalty killers keyed in on Bo Horvat in the bumper position.
With 11:13 left in the frame, Roussel took a slashing penalty to give the Sens their second power play attempt of the game. The Canucks killed off the penalty and we were back to even strength hockey.
Though the Sens couldn’t get a goal on the power play, they did strike just after it expired. Thomas Chabot fired a shot that tipped off of Austin Watson’s stick before bouncing off Demko’s mask and in. 2-1 Canucks after the Sens goal.
Just seconds after, Hoglander made an amazing one-handed pass to send in Tanner Pearson all alone and he made no mistake burying it past Murray. 3-1 Canucks.
Hoglander was one of the most impactful players through the first 40 minutes. He was battling every shift, making great passes, finding chemistry with his linemates and looking very fluid with engaging Hughes in the offence.
J.T. Miller took a penalty with 3:43 remaining in the period to put the Sens on their third power play of the game. The Sens had the worst power play in the NHL last season and it showed when Sutter was sent in on a shorthanded partial breakaway. He fired a shot into the top corner to make it 4-1 Canucks.
The Sens outshot the Canucks 14-9 in the second period but Demko was great in the second frame. He looked calm in the crease and athletic when he needed to be.
A three-goal lead going into the final frame is exactly what this Canucks team needed as they looked to bump the slump in game one against the Sens. They were only 20 minutes away from securing the bag and chalking up a W.
Let’s see what happened in the third period.

Miller took another penalty just 31 seconds into the period.
The Canucks killed off the penalty but the Sens got their chances. It turned some of the momentum even though they weren’t able to get one past Demko.
Things quieted down as the third period found itself being engulfed in icing calls and dump and chases. The minutes were bleeding away and for the Canucks, that was just fine.
Just past the midway point of the period, Roussel got into a “fight” but didn’t drop the gloves with Josh Brown. Both players were sent to the box with roughing minors. Roussel is closing in on 1000 career penalty minutes and there’s no way he isn’t aware of that. He was likely bummed out that they didn’t give him five minutes for the scuffle.
The penalties meant that we saw some four-on-four action.
The Canucks dominated the two minutes of four-on-four. The pressure led to a break as Quinn Hughes scored his first goal of the season. 5-1 Canucks.
The Canucks took another penalty but before the penalty could be called, MacEwen dropped the gloves with Ottawa’s goal scorer Watson. The fight didn’t see many punches thrown but the reason for the fight was MacEwen’s delayed penalty call for him running into Brady Tkachuk.
Motte and Beagle came in on a shorthanded two-on-one and Beagle took a slash to even up the penalties and give us 1:35 of four-on-four.
It felt like things couldn’t get much better for the Canucks until with 4:10 remaining, Olli Juolevi scored his first career NHL goal. 6-1 Canucks.
Things went all out crazy after the Juolevi goal when Sutter scored his first career hat trick to make it 7-1 Canucks.
Roussel dropped the gloves with Watson late in the game.
That’s all she wrote as the Canucks blew out the Sens on Monday night. 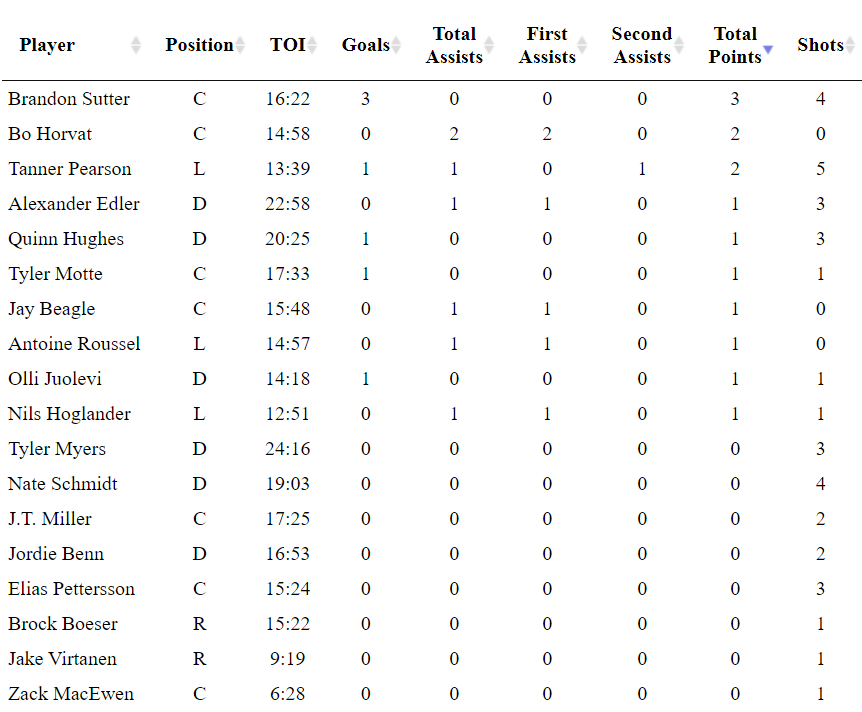 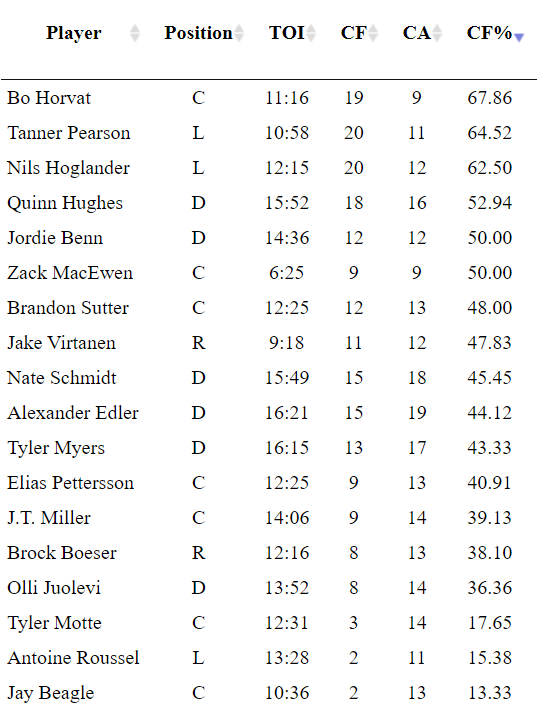 Brandon Sutter: Scored his first career hat trick and was on the ice for nine scoring chances.
Nils Hoglander: Continued to dazzle with his stick skills, battle level and ability to be creative in the offensive zone.
Thatcher Demko: Stopped 35 of 36 shots on net, made eight high danger saves and faced 33 scoring chances.

The Canucks really needed this one to go this way, eh?
With their general manager on the hot seat and questions heating up in the media, the Canucks came through with a massive 7-1 win. The team is not yet out of the woods as they need to continue this dominance for the length of this series. One win out of three against the lowly Sens is not good enough.
Sutter’s offensive explosion was promising and Hoglander’s all-around game had the team buzzing from one end to the other. The Sens also weren’t great, they made plenty of mistakes and gave the Canucks the opportunities to make this game look ugly.
The train continues to roll as the rematch will be Wednesday night.
Note the 5 pm start time.
Uncategorized
Recent articles from Faber