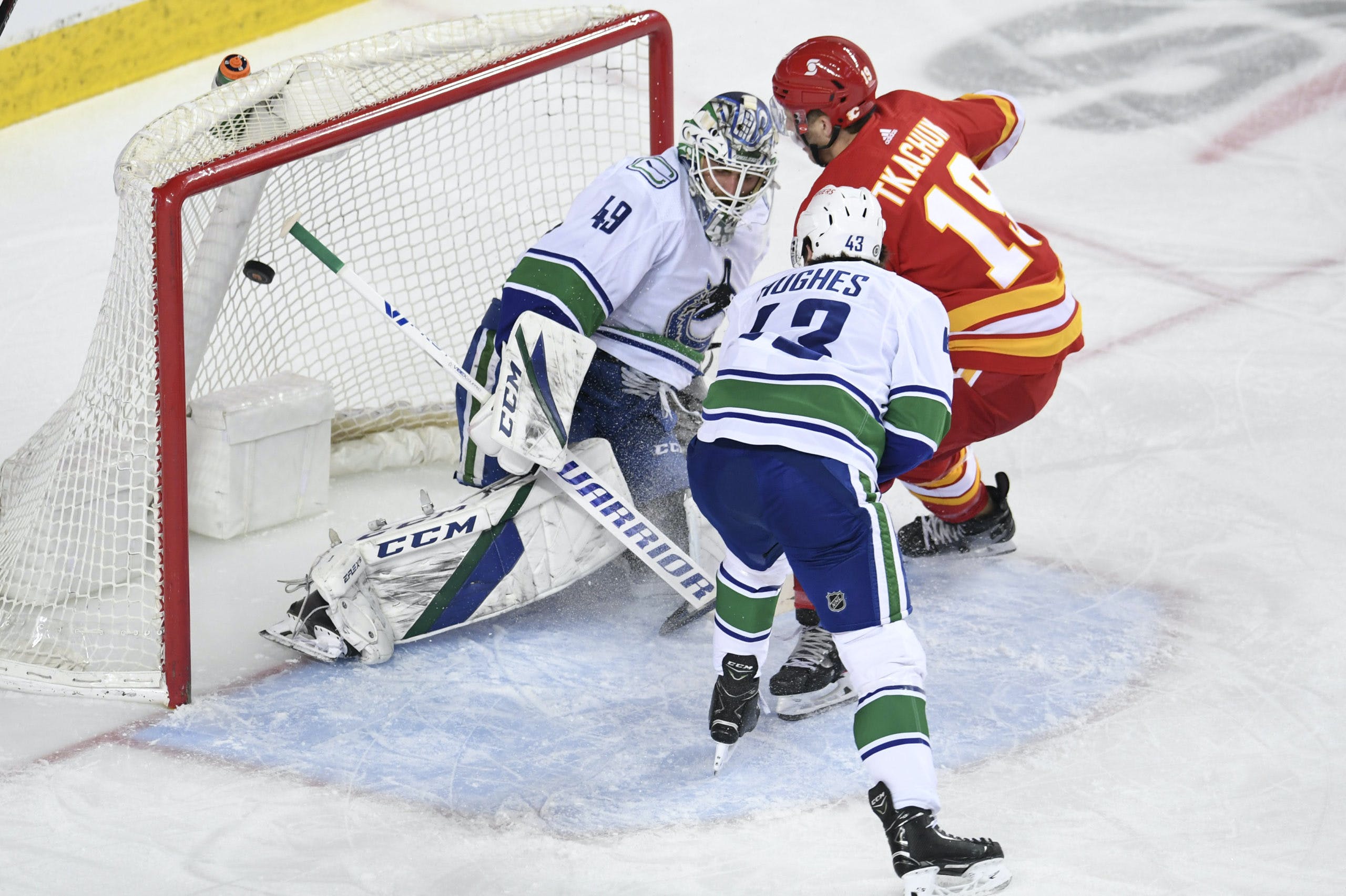 By David Quadrelli
1 year ago
Almost mercifully, the Vancouver Canucks played their last game of the season today.
Everything that could go wrong, went wrong for the Canucks this year, and the cherry on top was a brutal final stretch of games impacted by a COVID-19 outbreak.
For one last time this season: let’s do this!

Kole Lind got back into the lineup, and Alex Edler came out and officially finishes his 2020-21 campaign with zero goals, meaning he’ll enter next season — wherever that may be — sitting on 99 career goals.

The two sides went back and forth with no real scoring chances developing, and then Matthew Tkachuk tripped Jimmy Vesey roughly five minutes into the first.
Jack Rathbone continued to look solid in every situation he played in, but the threat of his shot on the power play gives the Canucks’ man advantage an entirely new weapon.
As has so often been the case this season, the Canucks’ power play couldn’t get any five-alarm chances set up and went down quietly.
Matthew Tkachuk found the back of the net after a sweet feed from Johnny Gaudreau to open the scoring in this one. 1-0 Calgary.
Bo Horvat walked in on Jacob Markstrom with a breakaway but couldn’t beat his old teammate.
Dillon Dube flew down the wing and got inside position on Quinn Hughes and beat Braden Holtby on a goal the Canucks’ netminder certainly wanted back. 2-0 Flames.
Kole Lind took a high stick but would return later in the period with a fat lip.
Andrew Mangiapane scored a greasy goal to make it 3-0 Flames.
At the end of the first, the shots were 9-5 in favour of the Flames.

The Canucks opened the period with some extended zone time, and Jack Rathbone managed to get two shots off, both of which were stopped by Markstrom.
Rathbone got a ton of minutes in this one and had numerous shifts against the Flames’ top line.
He was able to hold his own and disrupted the Flames’ offence on numerous occasions early in the second frame.
Despite not having much zone time, the Flames got a fortuitous bounce from the sidewall and took advantage of a breakdown by the Canucks’ defence. Brett Ritchie made it 4-0 Flames after having all the time in the world to pick his spot and beat Holtby.
Rathbone truly was the star of the second period as he was making an impact all over the ice. He helped extend zone time by breaking up numerous Flames breakout attempts and continued to look like a player who could be ready to play regular top-four minutes to begin next season.
The Canucks went to the power play and quickly converted.
Horvat got the puck back to Rathbone, who faked a slap shot that quickly turned into a slap pass for Brock Boeser, who one-touched it back to Horvat in the bumper before the captain rifled home a shot past Markstrom. 4-1 Flames
Shortly after, Boeser found the back of the net to make it 4-2 Flames.
Then shortly after THAT, Matthew Tkachuk beat Holtby with another softie to make it 5-2 Flames.
Markstrom took a shot up high that got under his mask but was thankfully no worse for wear.
Mikael Backlund scored to make it 6-2 Flames but the Canucks successfully challenged that the play was offside.
Tyler Graovac — who should absolutely be re-signed this offseason — broke in on a breakaway where he was slashed, giving the Canucks a late power play.
The Canucks couldn’t generate anything of substance against the Flames PK, and it was back to even strength with roughly three minutes remaining.
This one remained 5-2 in favour of Calgary heading into the third.

It’s time for the third and final period of this cursed season.
J.T. Miller made a strong move to the net and hit the post before crashing into the post. He grimaced and stayed down on the ice for a few seconds but was able to continue.
Connor Mackey scored the first goal of his NHL career after a low shot went off Holtby’s pad and right on the doorstep for him to tap home. 6-2 Flames.
Nils Höglander drew a penalty after Milan Lucic got his stick caught up in the Canuck rookie’s midsection. The Canucks power play, which was 1/3 on the night at this point, hopped over the boards and tried to chip away at the Flames’ four-goal lead.
The man-advantage got to work but once again, couldn’t generate much. Horvat tripped Backlund in the offensive zone and took the Canucks off the power play with a little over 20 seconds remaining on the Lucic penalty.
The Flames had over a minute and a half of power play time to work with, but the Canucks penalty killers managed to keep them at bay.
Michael Stone then took a tripping penalty and sent the Canucks back to the power play with a little over eight minutes remaining on the regular season.
The Canucks did not score and once again didn’t generate many chances.
The game closed out with some four-on-four action, but 6-2 would remain as the final score. 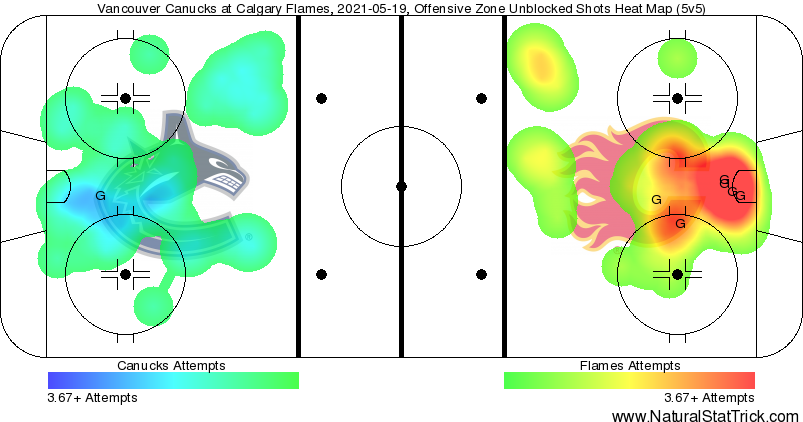 Yesterday, after Elliotte Friedman reported that Jim Benning would be returning as general manager, there were loads of unhappy people in the fanbase, especially on Twitter. Some even posted screenshots of them getting added to the season ticket waitlist for the Kraken — which have already sold out.
This is the best recap of the season by far:
Although these certainly challenge for that crown:

What can we say? Thanks for reading, I guess?
In all seriousness, we appreciate each and every one of you who followed along with us this season and interacted with our work. I say this on behalf of the entire staff at CanucksArmy.
There’s going to be a lot of content on this site over the offseason as we get set for the NHL Entry Draft, the Seattle Expansion Draft, and look back on players’ individual seasons.
Uncategorized
Recent articles from David Quadrelli