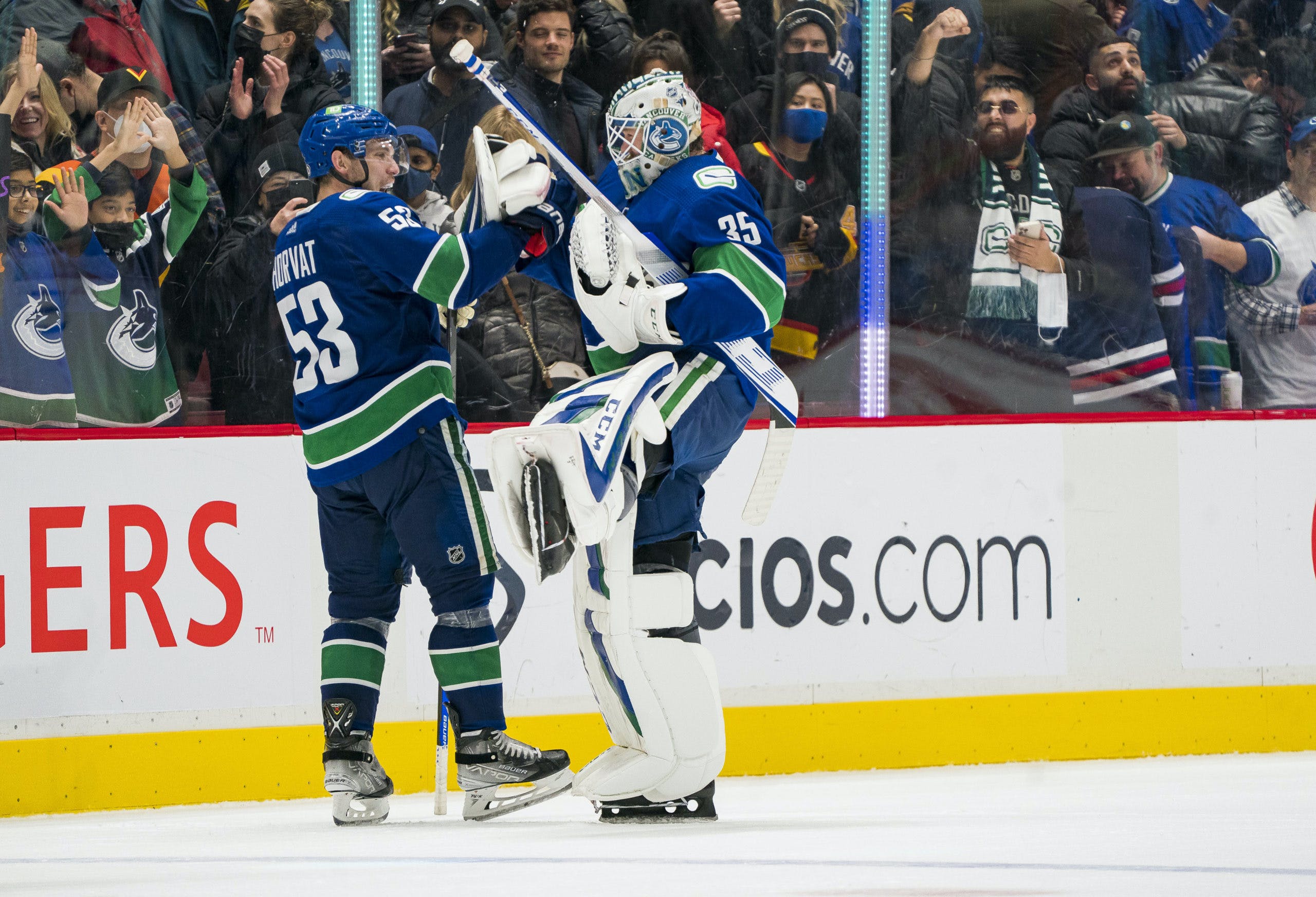 By David Quadrelli
11 months ago
With their two game winning streak on the line, the Vancouver Canucks welcomed the Winnipeg Jets to Rogers Arena for a Friday night contest.
The Canucks have been riding high ever since dramatic changes were made to their organization, namely, the hiring of Bruce Boudreau as head coach.
Here’s how the Canucks lined up against the Jets:

Thatcher Demko started in goal with Eric Comrie opposite him.
Let’s do this!

The two sides went back and forth, and after a defensive miscue from Tucker Poolman early, Kyle Connor found himself with an open net. Thankfully the puck bobbled on his stick, and he couldn’t pull the trigger.
Known Jet-killer Nils Höglander scored a gorgeous goal to make it 1-0 Canucks.
That’s his sixth career goal against the Jets — the most he’s scored against any time.
J.T. Miller took a penalty, and although the Canucks’ PK continued to look much more competent, it wasn’t good enough to stop the Jets.
Blake Wheeler beat a screened Thatcher Demko to tie this one up. 1-1.
Thatcher Demko made a huge glove save that will be on every highlight reel for quite some time I’m sure:
Tanner Pearson had a prime scoring opportunity late but double clutched and couldn’t pull the trigger.
Tyler Myers gave the puck away at the Winnipeg blueline which resulted in Blake Wheeler getting a breakaway opportunity that was promptly turned aside by Demko.
Kyle Connor got another chance immediately after, but Demko was sharp yet again, making his 13th save of the period.
Nils Höglander broke into the Jets’ zone right after and let go of a shot that beat Jets goaltender Eric Comrie to make it 2-1 Canucks.

The second period began with PA announcer Al Murdoch telling the Rogers Arena faithful of an official scoring change that took away Thatcher Demko’s assist on the second Höglander goal.
Elias Pettersson burst into the zone with a head of steam and let go of a slap shot off the rush that hit the crossbar behind Comrie.
At the six minute mark of the second, Alex Chiasson made a blind drop pass at the Canucks’ blueline which allowed the Jets to regain possession with numbers. Kyle Connor scored a goal to tie this one up at 2-2.
Conor Garland wasn’t okay with this, however.
Just 56 seconds after the goal, Garland broke in on a breakaway after a stretch pass from J.T. Miller. He faked backhand and neatly tucked the puck in on the forehand to make it 3-2 Canucks.
The teams were playing a pretty tight-checking game, but another defensive miscue from the Tucker Poolman-Tyler Myers pairing resulted in another goal for the Jets’ first line, this time it was Mark Scheifele from Connor and Wheeler to make it 3-3.
Quinn Hughes got caught out on a long shift with little support, and Andrew Copp scored a goal after the puck deflected out to him after hitting Demko’s pad. 4-3 Jets.
Pierre-Luc Dubois appeared to collide with Demko while streaking through the blue paint, so the Canucks challenged the goal for goaltender interference.
The goal was taken back and this one was against tied at 3-3.
Nils Höglander took a high-sticking penalty with just over five minutes remaining to send the Jets to their second power play of the game.
The Canucks managed to kill off the penalty, and headed into the third period looking for their third straight win with this one tied at three. Poetic.

Quinn Hughes took a hooking penalty less than two minutes into the third to send the Jets onto their third power play of the night.
The Canucks did a good job to kill off the penalty, and we were back to even strength.
After a strong forecheck from the Pearson-Miller-Boeser line, Boeser found himself with a grade-A opportunity, but unfortunately hit the outside of the post.
The Podkolzin-Pettersson-Garland line came out right after and had a strong shift where they too got some good looks off on Comrie.
Logan Stanley took a holding penalty on Conor Garland to send the Canucks to their first power play of the game.
The Jets killed off the penalty, but the Canucks kept up the pressure.
Vasily Podkolzin had a grade-A chance that rung off the crossbar, and Brad Hunt hit a post just seconds after that. This one remained tied at three with ten minutes to go.
The Jets looked tired as time winded down, but this game had the feel of one where the team that made the next mistake would come out on the losing end of this one.
The Canucks poured on the pressure late, but couldn’t break through, so we were headed for overtime tied at three.

Overtime was high-flying, exactly how three-on-three overtime was meant to be played.
It was odd-man rushes galore as Tyler Myers hustled back and defended a 2-on-1 perfectly.
Then the Canucks broke back the other way, with Boeser getting a quality shot off. Then it was the Jets bursting back the other way. Then it was the Canucks. Then it was the Jets, followed by the Canucks — with Elias Pettersson letting go of a wrister from the slot that was stopped by Comrie.
The Jets called a timeout with about three minutes remaining.
Kyle Connor let go of a one-timer that Demko got a piece of and managed to keep out of the net.
Then Nikolaj Ehlers found himself on a breakaway, but Demko was up to the challenge.
Rightly so, a standing ovation ensued for the Canucks’ goaltender.
Then Ehlers took a penalty with 49 seconds remaining to send the Canucks to the 4-on-3 man-advantage. The Canucks called their timeout, and the Canucks sent all their gunners out.
Pettersson, Miller, Boeser, and Hughes cycled the puck around, but couldn’t convert.
This one was headed for a shootout.

Elias Pettersson pulled off the Forsberg move that we’ve seen him pull off with ease before.
Demko stood tall and stopped Kyle Connor.
J.T. Miller went to the backhand but hit the post. The puck trickled toward the goal line but stopped just short.
Demko stopped Mark Scheifele to put the game on captain Bo Horvat’s stick.
Horvat was stopped by Comrie to give the opportunity to Demko to secure the victory.
Dubois was stopped by Demko and the Canucks exited with their third straight victory. 4-3 Final. 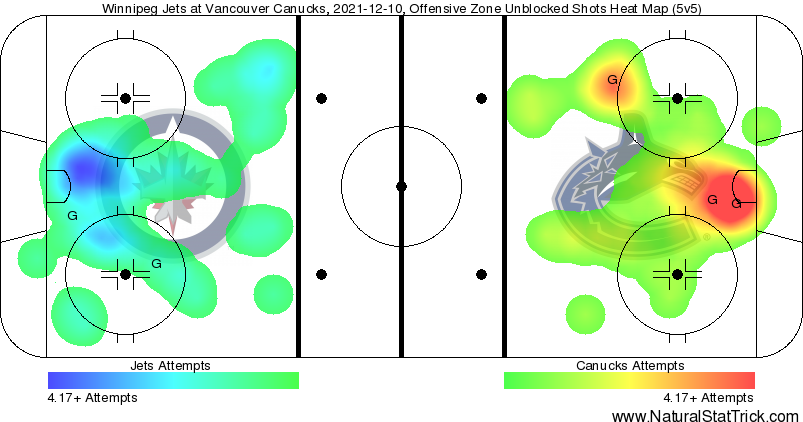 The Canucks are riding high, and the mood around this team is a good one. Jim Rutherford will speak to the media on Monday, and is promising a plan that he hopes will bring the Canucks to the promised land.
“They can’t all be Picassos,” head coach Bruce Boudreau joked after the victory Friday night.
This wasn’t a pretty game for the Canucks, but they got the job done. At the end of the day, that’s all that matters.
The Canucks have won five of their last six games and are going to be tested when the 18-6-1 Carolina Hurricanes come to town Sunday night.
Uncategorized
Recent articles from David Quadrelli