CanucksArmy post game: Spencer Martin continues to show well but the Canucks lose 3-2 in a shootout By Faber
7 months ago
Well, here we are.
For one final time in the 2021-22 season, let’s talk about a Vancouver Canucks game.
The storyline of any importance going into the game was J.T. Miller reaching 100 points on the season. Miller came into the night with 98 points through 79 games. His consistent offence was good enough to have him sitting in the top-10 of scoring in the NHL. Miller’s 98 points were good enough to have him sitting in ninth place for points this season and he was looking to become the ninth player to cross the century platform this season.
Bruce Boudreau also had a significant number to chase as he was searching for his 600th NHL win as a head coach.
In net, the Canucks were once again without Jaroslav Halak and Thatcher Demko. That meant that Spencer Martin was slated to start in a back-to-back situation. Up against him was Mikko Koskinen as the Edmonton Oilers looked to rest their playoff starter, Mike Smith.
On top of Smith getting some rest, the Oilers decided to give their top players a night off as well. Both Connor McDavid and Leon Draisaitl were given the night off as the Oilers sent a top line of Evander Kane, Ryan McLeod, and Jesse Puljujarvi. It was a night off for the Oilers. For Canucks fans, all eyes were on Miller and likely most of the passes will be on to him as well.
Here’s how Bruce Boudreau set his lineup for the final game of the year.

After a fun night on Thursday for the Canucks’ final home game of the season, they looked to close the book on a disappointing season that saw change and gave hope to a fanbase that craves a winning organization.
We are here for J.T. Miller points and J.T. Miller points only.
So, for one final time…
Let’s go!

The game began with what felt like a running clock with no whistles. Both teams were simply getting the puck deep and looking to move it around in the offensive zone for as long as possible. Miller forced a turnover near the midway point of the period and drew a power play on the turnover.
Brett Kulak took a high-sticking penalty that gave the Canucks a chance with the man advantage. The first unit had a pair of half-decent chances with an Elias Pettersson one-timer that was gobbled up and a Miller shot-pass that was redirected by Brock Boeser before trickling up to but not past the goal line.
Tyler Myers had a pair of decent scoring chances with five minutes left in the period. Myers and Quinn Hughes were jumping into nearly every rush up ice and the Canucks were content with long shots on Koskinen.
The Canucks eventually set up a high-danger scoring chance on the stick of Miller and he ripped a wrist shot from the slot that went over Koskinen’s glove and into the back of the net. 1-0 Canucks.
Evander Kane took a puck over the glass penalty with 1:40 remaining in the period.
The first unit had good possession and Miller was firing shot-passes off of Boeser and Alex Chiasson’s sticks. The Canucks were unable to get a goal on their shortened play with the man-advantage. They were set to have 20 seconds remaining on the power play to begin the second period.

With the Oilers resting their top players, the Canucks took care of business and were the better team in the first period. They fired 18 shots on net and came out of the period with a one-goal lead. Miller found himself just one point away from 100 and had 40 minutes left to seal the deal.
Spencer Martin looks fine as well but wasn’t tested with any quality scoring chances or even sustained pressure against in the opening 20 minutes.

The Oilers had a better push to begin the second period. They were able to create scoring chances early and often in the first few minutes of the middle frame. It took about seven minutes for the Canucks to get any sustained pressure in the Oilers’ zone. Martin stood tall and kept the Canucks’ one-goal lead intact through the Oilers’ offensive push.
Martin continued his phenomenal play this season as he stood on his head for the remainder of the second period and made some huge saves as the period went on.
All the while, the Canucks were continuing to fire a ton of shots on net throughout the period. They ended up finishing the first 40 minutes with 30 shots on Koskinen.

Martin was the best Canuck in the second period. He faced seven high danger scoring chances and kept his net clean through 40 minutes. The Oilers has 18 shots on Martin in the first two periods and Martin was able to stop each of them to maintain the Canucks’ one-goal lead as we moved into the final third period of the 2021-22 season.
We were still on #MillerWatch, as he was sitting on 99 points at the second intermission.

Once again, the Oilers came out hot to begin the period. Martin made a pair of big saves before Kulak fired a screened shot that found the back of the net and tied up the game at one just 31 seconds into the period. 1-1 after the Kulak goal.
The Canucks came right back and regained their lead. Conor Garland got some room from a nifty play from Hughes and he flew down the left wing and snuck the puck through Koskinen for his 19th goal of the season. 2-1 Canucks after the Garland goal.
Martin made a huge save on McLeod during a two-on-one where Martin slid to his left and kicked out the right pad to stop a scoring chance.
After a few big saves from Martin, he was beaten by a Tyson Barrie point shot that had traffic. Both of the Oilers’ goals came from a lot of traffic in front of Martin and the game was all tied up. 2-2 after the Barrie goal.
Chiasson took a penalty with 4:55 remaining and the Oilers went to work on their first power play of the game. The Canucks were able to kill the penalty off on the back of a couple of big Martin saves.
The seconds ticked away and we were off to overtime!

Hughes set up Miller right at the doorstep but Koskinen was there to make a big save and keep Miller at 99 points on the year.
Martin had a second of hesitation to chase a puck and was then forced to backtrack and defend a breakaway from Zach Hyman.
Overtime solved nothing and we were off to a shootout to settle this one.
Miller finished his 2021-22 season with 99 points.

Martin stopped Ryan Nugent-Hopkins.
Pettersson missed the net.
Kane fired the puck into Martin’s glove.
Miller came in slowly and couldn’t get the backhand over Koskinen.
No player scored in the first two rounds.
Kailer Yamamoto lost control of the puck.
Boeser was stopped by Koskinen.
Martin made another save.
Podkolzin fired the puck into Koskinen’s pad.
Barrie missed the net and Martin was perfect through five rounds.
Garland couldn’t beat Koskinen.
Devin Shore deked and beat Martin.
Koskinen stopped Oliver Ekman-Larsson and the Oilers won. 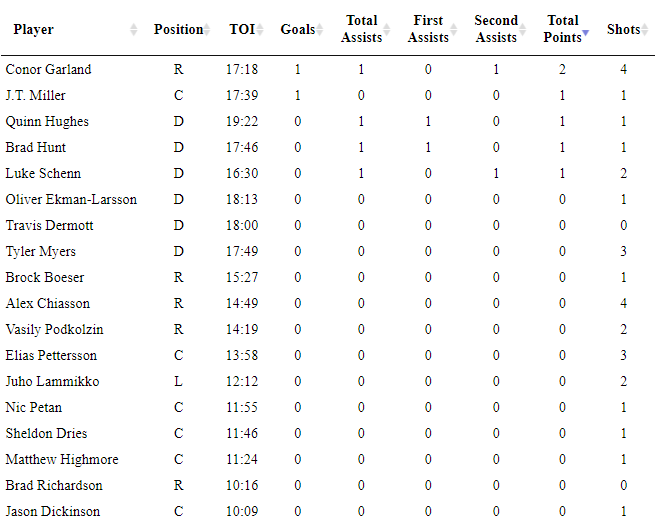 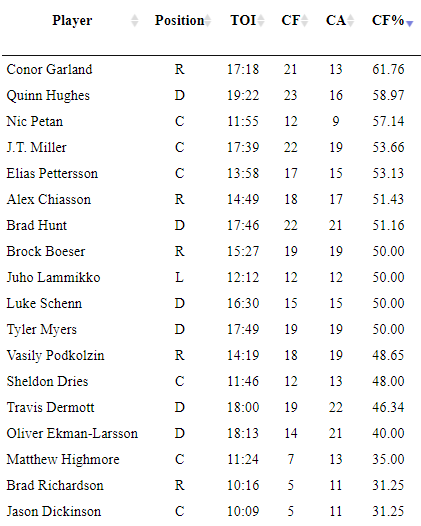 Spencer Martin was excellent in the shootout and overtime as well as showcasing another stellar performance throughout the game. He stopped 32 of the 34 shots he faced and held the Oilers’ offence in check even with them having 44 scoring chances in the game. The future is bright for Spencer Martin and the Vancouver Canucks.

Miller couldn’t get to 100 points and Boudreau will have to wait to get to 600 wins.
Conor Garland spoke about a speech from Quinn Hughes where he wanted to change the culture in the room as the Canucks look to be a team that gets into the playoffs and begins to compete for the Stanley Cup. Garland said that they need to start somewhere and little things like playing hard in the stretch are important for this group.
That does it for another season of Canucks hockey. Thanks for coming by for the CanucksArmy post-game reports all season long. The comments section is always a treat and there are great discussions every night on this site. Let me know in the comments what you’d like to see different for next year’s post-game reports or what you enjoyed about this year’s reports.
We now shift into offseason mode and it’s time for me to get my scouting hat back on. There will be some “Scouting with Faber” articles coming very soon!
Thanks for another year of fun post-game reports!
See you all next year for the same fun.
Uncategorized
Recent articles from Faber