CanucksArmy post game: Pettersson and Hughes put up points in their debuts but lose to the Oilers in a penalty filled affair 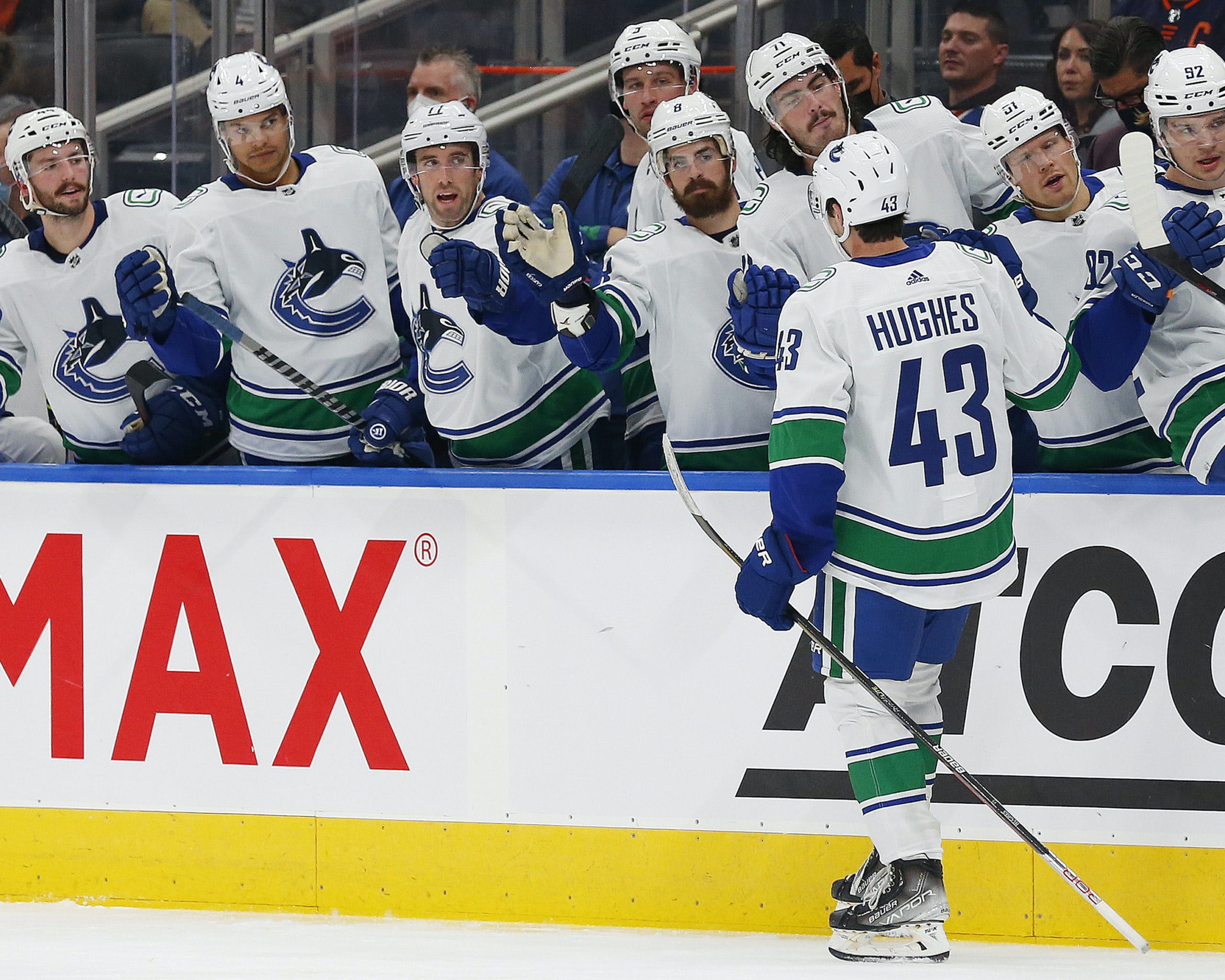 By Faber
1 year ago
It’s been a long preseason without Quinn Hughes and Elias Pettersson in the lineup.
On Thursday night, that all changed. After locking in on contract extensions, both Hughes and Pettersson were back in the lineup for the Vancouver Canucks as they were in Edmonton to face off against the Oilers.
With this being the second last preseason game of the year, it was an NHL-heavy lineup for both teams.
The Canucks sent Jaroslav Halak to do their puck-stopping while Mike Smith tended goal for the Oilers.

Tucker Poolman has been alongside Oliver Ekman-Larson since day one of training camp but Hughes needs a partner and Poolman fits the bill.
The pairing will most definitely be under a microscope as they are on-track to be the Canucks’ top pairing on opening night of the regular season.
That pairing was tested on Thursday night as both Leon Draisaitl and Connor McDavid were in the Oilers’ lineup.
It’s time for puck drop, and you know what that means.
Let’s go!

Travis Green was immediately matching up Hughes-Poolman against the Draisaitl-McDavid line. That’s the welcome back to hockey that Hughes was going to be going through on Thursday night.
Speaking of Hughes, he took a hooking penalty exactly five minutes into the period. That gave the Oilers’ strong power play unit their first attempt of the night.
Zack MacEwen was getting some penalty killing time and took what looked like a weak hooking call with 18 seconds remaining in the original power play.
The Oilers’ power play is too good to give a five-on-three to and McDavid found Draisaitl on a cross-ice one-timer to give the Oilers an early lead. 1-0 Oilers.
The Oilers scored during the 18 seconds of their two-man advantage and that meant that they still had a long five-on-four power play to add to their lead.
Duncan Keith took a penalty with 10:06 remaining to give the Canucks their first power play of the game. As expected, both Hughes and Pettersson were out on the first unit.
Pettersson got a couple of one-timers off with one being blocked and the other finding Mike Smith. The first unit had a couple of good looks but was unable to get anything past Smith. The Oilers killed off the penalty and held onto their one-goal lead.
The Canucks had a three-on-one with Vasily Podkolzin letting go of a shot in tight. He went hard into Smith hard and earned a goaltender interference penalty. Smith was shaken up but ended up being okay as the Oilers got their third power play opportunity with 4:37 to play in the first.
The Canucks were able to kill off the penalty with an interesting mix of penalty killers. Will Lockwood was rotating with MacEwen on the penalty kill. Green was giving both a chance to show what they could do. The penalty killers were getting a workout in the period.
Kyle Burroughs took a high-sticking penalty to give the Oilers their fourth power play.
You can’t play with that much fire and expected to not be burned. McDavid came down the right side with speed after a quick pass up from Smith on a Canucks change. He went short side on Halak and doubled the lead. 2-0 Oilers.

Its been a problem through the preseason and the Canucks took their penalty troubles to an Alex Edler level in the first period as they gave the Oilers four opportunities. The Oilers had 11 shots on net with the man-advantage and that’s a goalie’s nightmare.
Through the penalties, players like Lockwood and MacEwen were given an extended run to show that they were capable of killing penalties for Green. Neither really stood out positively in the period as the first 20 minutes just looked downright sloppy for the Canucks.

Just 1:21 into the period, McDavid took a holding penalty for taking down Lockwood after Lockwood caught Draisaitl with an unpenalized high hit.
The Canucks were able to strike on this power play. J.T. Miller made a great pass back to Hughes for a one-timer and it went off the post and in for Hughes’ first goal of the preseason. 2-1 Oilers after the Hughes goal.
Jack Rathbone made a good move to split the defence but was dragged down by Keith and that gave the Canucks another power play opportunity.
Another power play goal put the game into a tie when Pettersson made a great shot-pass off of Nic Petan’s stick and past Smith. 2-2 after the Petan goal.
Burroughs took another penalty and gave the Oilers their fifth power play attempt of the game. For the second time, the Canucks took a penalty while shorthanded. They had a bad change and were assessed a too many men on the ice penalty.
That penalty gave the Oilers an 87-second five-on-three. The three-man group did a great job and was joined by Burroughs to kill off the remainder of the power play.
After the penalties expired, the Oilers kept possession and eventually beat Halak when Derek Ryan tipped a point shot in the slot.
Sheldon Dries drew an interference penalty on Kris Russel right after the goal and that sent the Canucks back to the power play as they were down a goal.
By the way, Sheldon Dries is a winger who plays for the Canucks. He plays a very quiet game and is rarely talked about in these post game reports.
Pettersson had a great look from the right side but was stopped by Smith’s blocker and the Canucks weren’t able to get another power play goal on this attempt.
The final handful of minutes were pretty quiet and flew by as it felt like the longest stretch of the game without a penalty being called. The Canucks went into the intermission down by one.
After 40 minutes, the Oilers led the Canucks in the shot department by a count of 33-21.

I’m not a goalie guy but there’s something about Halak that doesn’t scream confidence. He just gives me this nervous feeling every time the puck is sent across the ice or into the slot. Maybe it was from watching Mikey DiPietro look so calm and solid but there’s just something off about Halak.
Though it was his first game back, Hughes didn’t look out of place defensively at all. He defended well against McDavid on a couple of rushes in the period and won multiple stick battles against the rest of McDavid’s line.

The first five minutes flew by without a whistle. Podkolzin had a good rush toward the net and Chiasson continued to be a pest around the crease.
Once we were back to even-strength hockey, the game was flying by. Then, the Canucks worked their way to another power play opportunity with 11:42 remaining in the period.
Rathbone, Podkolzin, Garland and Pettersson each had good looks on shots but Smith made a few nice glove saves to maintain the Oilers’ one-goal lead.
The Oilers scored a goal that was disallowed because Zach Hyman made contact with Halak in the crease. The Canucks continued to trail by one with just 5 minutes remaining in the game.
Zack Kassian dropped the gloves with MacEwen and the two big bodies threw a barrage of punches in a spirited bout. There was concern after the fight as Kassian went down without his helmet on and hit his head on the ice. He was helped off the ice and the game continued on with 3:54 remaining.
The Canucks pulled their goalie with 2:45 remaining and Pettersson made a nice toe save to avoid an empty net goal.
Smith just missed the empty net on a shot attempt and the Canucks had some good chances in the final 45 seconds. They were unable to get a goal and with that, they took a 3-2 loss in their second last preseason game.

It was a good period to watch as there weren’t as many penalties as the first 40 minutes. The Canucks had strong control of the possession in the third period and if it wasn’t for Smith’s strong glove, the Canucks could have snuck a victory in a game where wins mean nothing.

NaturalStatTrick did not have all the information available at the time of the post game report. These stats are from up to 8:20 in the third period. 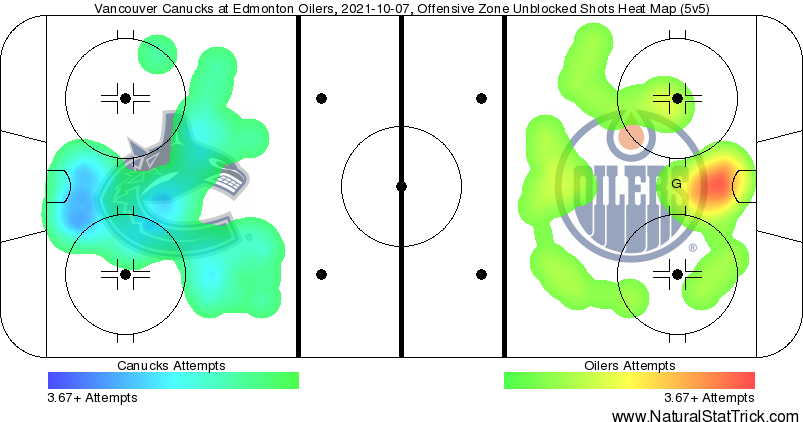 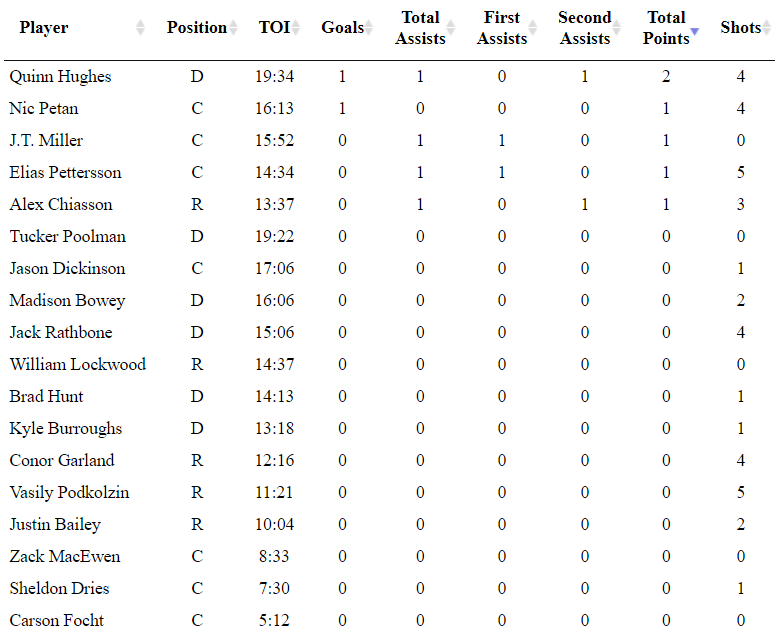 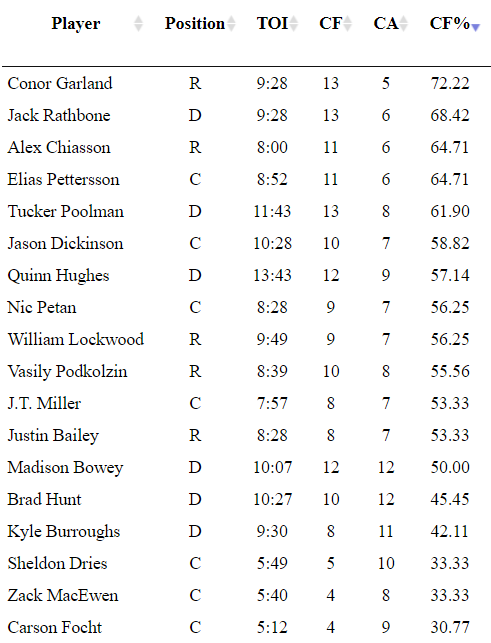 The Canucks played a pretty good game at five-on-five but the penalties in the first 40 minutes really bit them in the butt in the final outcome of the game. “We took too many penalties again, we’ve got to stay out of the box,” said head coach Travis Green when asked his thoughts on the game.
Hughes and Poolman made their debut as a pairing and held positive possession numbers in a very tough matchup where they were line matched with the McDavid-Draisaitl line. Green was impressed with the pairing in their debut.
“I liked a lot of it,” said Green. “You’re playing against the best line in the league. I thought Quinn looked sharp tonight, probably had a couple of passes he probably wanted back tonight. Poolman has had a really good camp for us. He looked good with Oliver [Ekman-Larsson]. He looked good again tonight. He’s a strong skater, he’s long, his hockey sense is good.”
When asked about his thoughts on Poolman’s versatility to play with Hughes or Ekman-Larsson, Green gave a glowing review on Poolman’s game. “That’s what you want in all your defencemen. You want them to be good skaters, you want them to be smart, you want them to be able to defend and you want to have options.”
Pettersson and Hughes were back in the lineup on Thursday and immediately made their presence felt on the scoresheet. Hughes had a rocket of a goal while Pettersson set up a goal to Petan on a great pass. Pettersson was back to his old ways of dangling on the boards and winning puck battles like he was a BCHLer at an elementary school and Hughes held his own against the best line in the league. It was all positive for the two young stars.
We now move to the final game of the preseason on Saturday as Travis Green is set to ice his NHL lineup when the Canucks host the Oilers in Vancouver. The Canucks open up their regular season on Wednesday against these same Oilers and on that night, there will be points involved for the standings.
We should expect to see a great preseason game on Saturday as there was some chippiness in Thursday’s match and with the regular season opener just around the corner, both teams will look to send a message.
Uncategorized
Recent articles from Faber