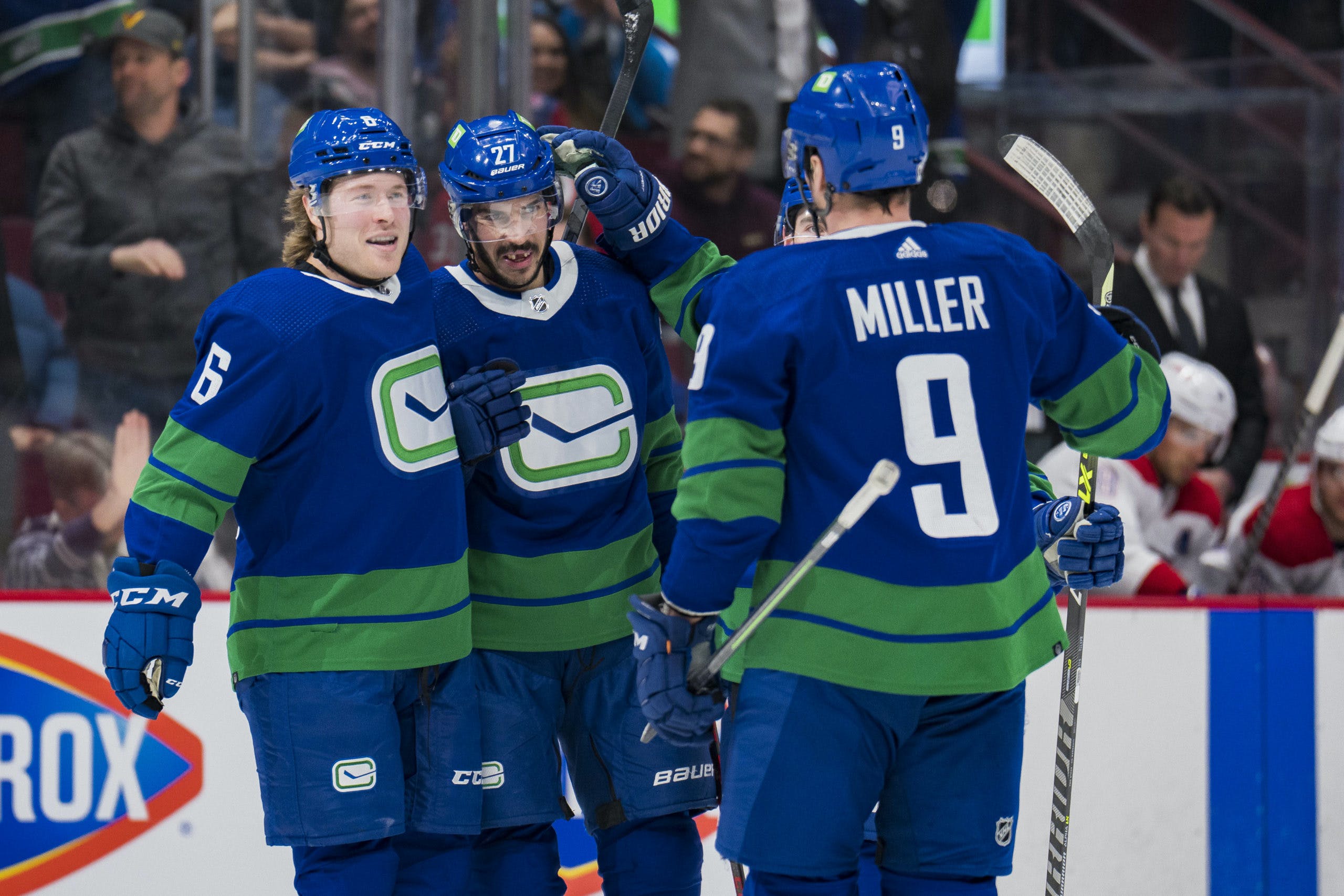 Here’s how the Canucks lined up.
It was Thatcher Demko vs. Sam Montembeault. It was — what the team referred to it as, at least — a sold-out crowd with a good mix of blue and red sweaters. It’s *checks notes* Wednesday night!
Let’s do this!

Tyler Motte was called for a phantom tripping penalty early on and sent the Canucks to the penalty kill in a hurry.
The Habs struggled to get set up, and then Brett Kulak was given a two minute minor for hauling down Elias Pettersson.
On the Canucks’ first power play, Pettersson set up Brock Boeser for a redirect play that was stopped by Montembeault. Beyond that, the Canucks cycled the puck around but didn’t manage to generate any more quality chances.
Nils Höglander was absolutely robbed on a wraparound chance, but worked hard to keep the puck. This resulted in some extended zone time in which the Pettersson line looked absolutely dominant.
The Habs iced the puck, Luke Schenn threw a massive bone-crushing hit, the fans competed in a “who can chant the loudest?” contest, but this one remained scoreless at the halfway mark of the first period with the Canucks leading 5-1 in shots.
Artturi Lehkonen opened the scoring after Luke Schenn pinched and Quinn Hughes was left on a 2-on-1. Jake Evans slid the puck over to Lehkonen, and this game had its first goal. 1-0 Canadiens.
But wait! There’s more goals!
Travis Hamonic wristed a puck through traffic that found the back of the net to tie this one up at 1-1.
That was it for the first as the Canucks were overall the better team after 20 minutes of play — but not by much.

Brock Boeser was absolutely robbed on the backhand after being set up by Tanner Pearson. Mike Hoffman got his stick in on Boeser’s hands, however, and was given two minutes for slashing.
Back to the power play.
Quinn Hughes found some time and space and wristed a shot that Monetembeault knocked down with his glove before the Habs cleared the puck down the ice.
The first unit struggled to break out of their own end and with less than half of the power play remaining, Bruce Boudreau sent out his second unit.
Alex Chiasson had a golden opportunity at the side of the net that Montembeault lunged across to stop with an outstretched leg.
The penalty expired, and shortly thereafter, the Canucks got caught on a brutal line change and gave up a 2-on-0 that Thatcher Demko had to be sharp to stop.
J.T. Miller then made a bad pass in the neutral zone that resulted in the Habs breaking in once again with numbers.
In his attempt to disrupt the play, Miller took a slashing penalty and sent the Habs back on the power play.
On the ensuing man advantage, Demko was once again sharp, and as he has been all season long, he was the Canucks’ best penalty killer.
Josh Anderson got a penalty for closing his hand on the puck and after a TV timeout, the Canucks made quick work of the Montreal penalty kill.
After Bo Horvat won the draw, Quinn Hughes and J.T. Miller cycled the puck down low to Brock Boeser behind the net. Boeser then fired a sharp angle shot short side on MOntembealut, and after the Montreal netminder turned the chance aside, Boeser buried the rebound. 2-1 Canucks just nine seconds into the power play.
During the next TV timeout, this happened:
2-2 on Lehkonen’s second goal of the game.
Tyler Myers took a cross-checking penalty with just over two minutes remaining in the period and the Canucks were back to the kill.
The Canucks killed off the penalty, and with two minutes remaining, Elias Pettersson and Conor Garland teamed up to set up Juho Lammikko for a redirect opportunity that trickled past Montembeault but stayed out after hitting the post.
This one was tied at two heading into the third.
In the intermission, Boudreau said post game that the message was clear: we need to go out and win the third period.
Let’s see how they did.

The third period began with a strong shift from the Pearson-Miller-Boeser line that resulted in a couple of shots as the Canucks tried to come out with a ton of pressure on the Habs.
On their second shift of the game, Miller pickpocketed at the Montreal blue line and wired home a hard wrist shot to make it 3-2 Canucks.
The Canucks kept up the pressure, and Ben Chiarot was the next Montreal player to take a penalty when he high-sticked Tanner Pearson in front of the Habs’ net.
On that power play, the Canucks continued to keep the pressure up, as Elias Pettersson burst into the Montreal zone with speed, shimmied his way around a couple of defenders, and wired home his 18th of the season to make it 4-2 Canucks.
Bo Horvat took a penalty for interference with just under ten minutes remaining, but unsurprisingly so, the team that insists on using Ben Chiarot as the point man on their first power play unit was unable to convert.
Back at evens, the Habs were able to strike when Rem Pitlick let go of a one-timer that beat Demko to make it 4-3 with just under five minutes remaining.
The Canucks began to load up their lines as they tried to close this one out and secure a huge two points in the standings.
The Canucks sent out Pettersson, Miller, and Bo Horvat to close this one out, and close it out they did. This time, it was the captain who put the icing on the cake and secure the win.
5-3 final. 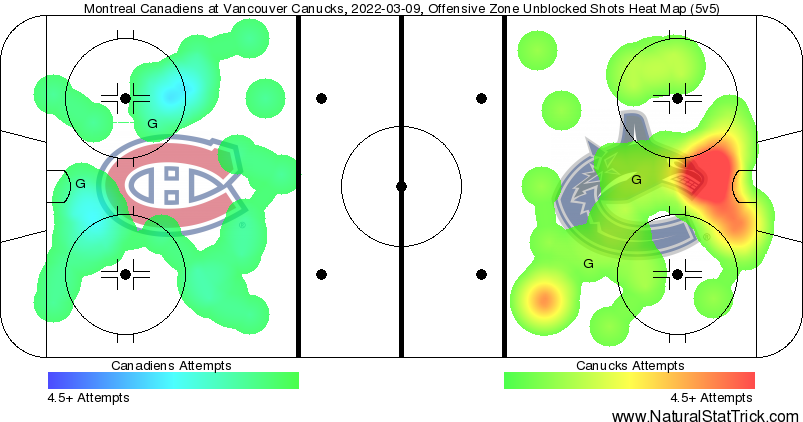 It’s hard not to give top performer honours to the four-point man J.T. Miller tonight, but Brock Boeser deserves an honourable mention at the very least.
Boeser was effective all over the ice, made some nice and simple breakout plays, and obviously scored a goal as well.
Interesting to note: On Miller, Boudreau said “he’s definitely taken over as our catalyst and our leader, and that’s wonderful to see because you need that at this stage of the season.”

The Canucks didn’t necessarily turn in a complete 60-minute effort tonight, but they got the job done against a team that looked disjointed at the best of times.
They controlled the pace of play almost all night long, and although Bruce Boudreau called the performance his club turned in “sloppy”,  they came away with two points and continue their improbable march back into the playoff conversation.
And given where they are in the standings right now, that’s all that matters for this team: W’s.
The Canucks will be back in action Friday night when they welcome the Washington Capitals to Rogers Arena for the second of their seven-game homestand.
Uncategorized
Recent articles from David Quadrelli