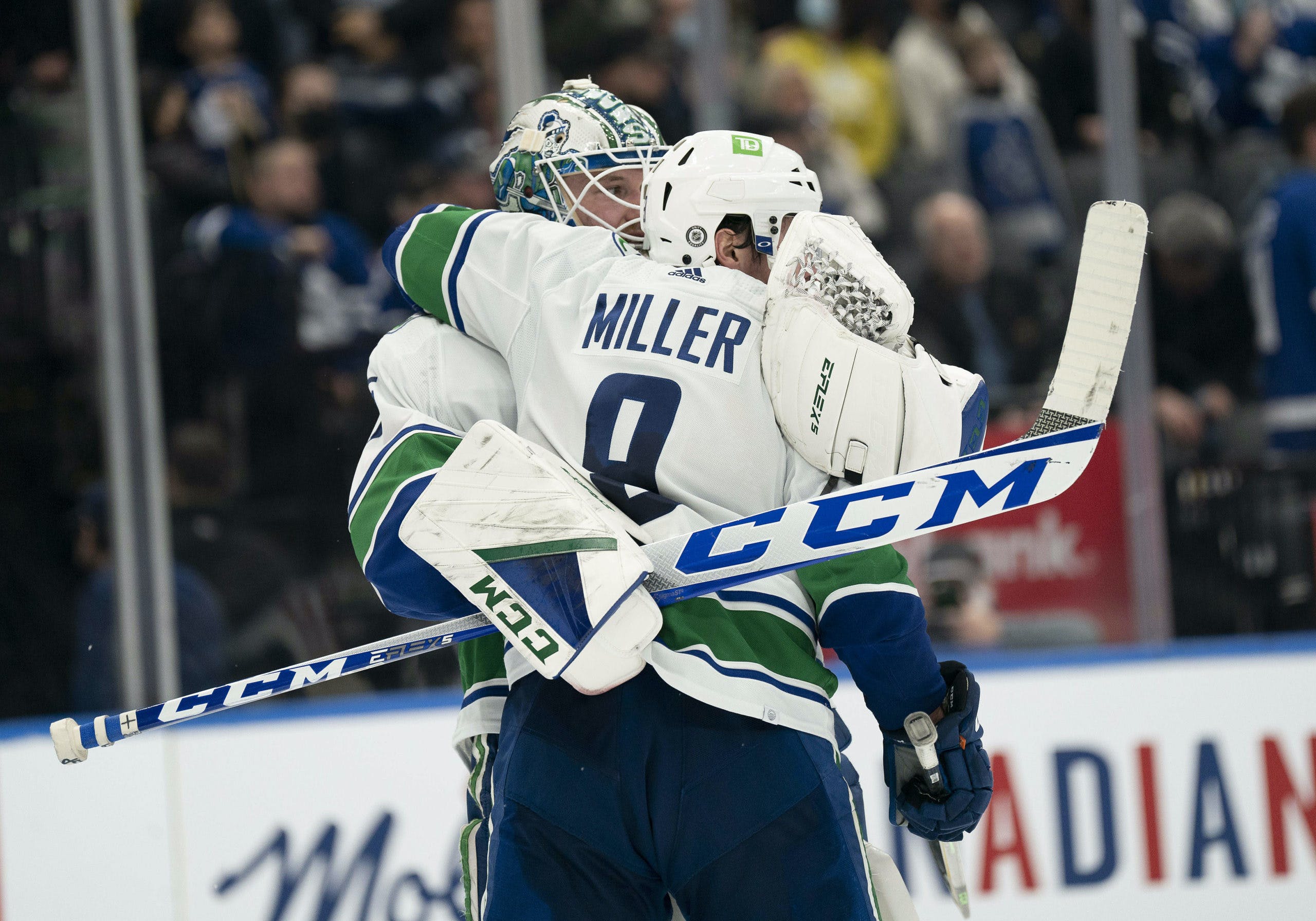 By Faber
10 months ago
It was a marquee matchup as Hockey Night in Canada kicked off with a west vs east matchup. The Vancouver Canucks were in Toronto to battle the Leafs.
The Canucks were attempting to hold on to their playoff hopes while the Leafs were looking to bounce back after a tough 5-1 loss to the Buffalo Sabres.
A deciding factor of the game was going to be between the pipes as Jack Campbell got the call for the Leafs to battle against Thatcher Demko, who started for the Canucks.
The lines stayed the same for the Canucks as we saw the trio of Nils Höglander, Elias Pettersson, and Conor Garland sticking together for this big Saturday night matchup.

J.T. Miller came in on an eight-game point streak, Elias Pettersson had 11 points in his last seven games, and Demko came in winning his last four starts.
The hockey world was watching and the Canucks were looking to break their 12-game losing streak in Toronto.
It’s time for puck drop.
Let’s go!

Unlike their game against the New York Islanders, this game had a ton of pace off the jump. The Miller line was off to a hot start thanks to an active stick from Brock Boeser and a great breakout pass from Miller at the three-minute mark.
The Leafs had early pressure but the Canucks’ line that was playing well early was rewarded for their good play. Travis Hamonic fired a shot from the point that was handled by Tanner Pearson before Miller jumped on the loose puck and fired a shot from the slot that beat Campbell. 1-0 Canucks.
The first penalty of the night came to Matthew Highmore for slashing with 10:40 remaining. It was a pretty weak call and sent the Leafs’ potent power play to work.
The Leafs struck quickly as John Tavares picked up a pass from Mitch Marner and ripped a shot during a three-on-one that beat Demko. 1-1 after the Tavares goal.
The Leafs built momentum after their power-play goal and had chances on Demko after the halfway point of the period. There were three offensive zone faceoffs for the Leafs as they fired shots on Demko, who held his own in the crease after allowing the Tavares goal.
The game was living up to expectations as the teams were going back-and-forth with scoring chances and were putting on a great show. Tyler Motte had a good scoring chance during a two-on-one but fired the shot into Campbell’s glove.
The Canucks pressured late in the period with some good shifts from the Miller line as well as the Bo Horvat line. Hamonic fired a shot from the point during a Horvat shift and the puck caught a couple of bounces and slid through Campbell. Hamonic was credited with the goal. 2-1 Canucks.
That was where we wrapped up the period as the Canucks clung to a one-goal lead after a strong performance in the opening 20 minutes.

The Miller line was excellent in that period. They won their matchup with a goal in the first period and controlled 71.4% of the attempted shots. Their forecheck was great as Boeser was strong on the boards and had an active stick while pressuring the Leafs’ defencemen. Miller looked like a man on a mission as he was the best player on the ice in the opening 20 minutes.

After the Leafs had basically three minutes of pressure, the Canucks broke out of the zone and Matthew Highmore drew a penalty with 16:03 remaining in the second period.
The power play went to work and stayed hot. It was another Miller-Boeser combo. Miller sent a pass down to Boeser in front of the net and after tipping the puck on Campbell, he knocked the rebound out of mid-air, and into the back of the net. 3-1 Canucks.
The power play came through when the Canucks needed it and Miller notched yet another multi-point night.
It didn’t take long for the Leafs to punch back as they came down on a two-on-one. William Nylander sauced a pass over to Nick Robertson and he roofed it over Demko for the first regular-season goal of his career. 3-2 Canucks.
Demko made a huge pad save on Wayne Simmonds during a two-on-one. Demko slid across the crease to his right where he slammed the door shut on Simmonds in his 1000th NHL game.
Boeser had a bad giveaway in his own zone that went right onto the stick of Matthews. The Leafs’ top scorer was fading away in the slot but still fired a perfectly placed shot into the top corner of the net. 3-3 after the Matthews goal.
The Leafs continued to pressure the Canucks and ended up having Demko lose his stick during the offensive zone pressure. Matthews circled around the zone and wired a one-timer from the top of the zone and beat the stick-less Demko to give the Leafs their first lead of the game. 4-3 Leafs.
Just after the goal, Pettersson took a high-stick from Simmonds and the Canucks went back to the power play with 7:15 remaining in the period.
Though there were some good passing plays during the man-advantage, the Canucks were without a shot on their second power play of the game.
The period came to an end with the Leafs holding onto their one-goal lead by the skin of their teeth.

Both teams could have had three to four goals in the period. It was another exciting 20 minutes of hockey that saw the Leafs take the lead during a period where the teams traded a bundle of chances. The mistakes that the Canucks made in the period were punished and that gave the Leafs a lead going into the second intermission.
The Boeser giveaway was a bad one and teams like the Leafs don’t miss on chances like that. We were off to the third period with the Canucks trailing by one. No matter the case, it was shaping out to be a very exciting hockey game.

The Canucks came out firing and we’re quickly able to get the game back to all-square. Myers fired a shot from the point that was tipped in by Tanner Pearson for his 12th goal of the season. 4-4 after the Pearson goal.
It took just 63 seconds for the Canucks to take away the Leafs’ lead and we were set up for an entertaining period in Toronto. Boeser happened to draw the second assist on the goal—that was good for his confidence after the poor giveaway that set up the Matthews goal earlier in the game.
Everything was coming up Myers early in the period. The Canucks came in on an odd-man rush and had a puck bounce off Marner’s stick and right onto the tape of Myers. He quickly released a shot that caught Campbell by surprise and found twine. 5-4 Canucks.
The pressure didn’t stop with the Myers goal. Bruce Boudreau had his boys skating hard in the early stages of the third period as they sent pressure in waves on the Leafs.
Luke Schenn flipped a backhand over the boards and took a delay of game penalty with 9:57 remaining in the period.
The Canucks were able to kill off the penalty but the Leafs kept the pressure on after their power play expired. Demko made a huge point-blank save on Matthews and was able to cover up with 2:58 remaining in the game.
The Canucks’ one-goal lead was being pushed and after the commercial break, the Leafs pulled their goalie with 2:58 remaining.
Demko was huge in the final two minutes as Marner, Matthews, and Tavares all had quality scoring chances but Demko was there to deny the three scorers. Pearson made a diving poke check to stop a Matthews one-timer and the Canucks were then able to clear the puck which Pettersson chased down and passed the puck to Motte to bury it into an empty net.
It was a huge two points for the Canucks as they continued to push for a playoff spot. 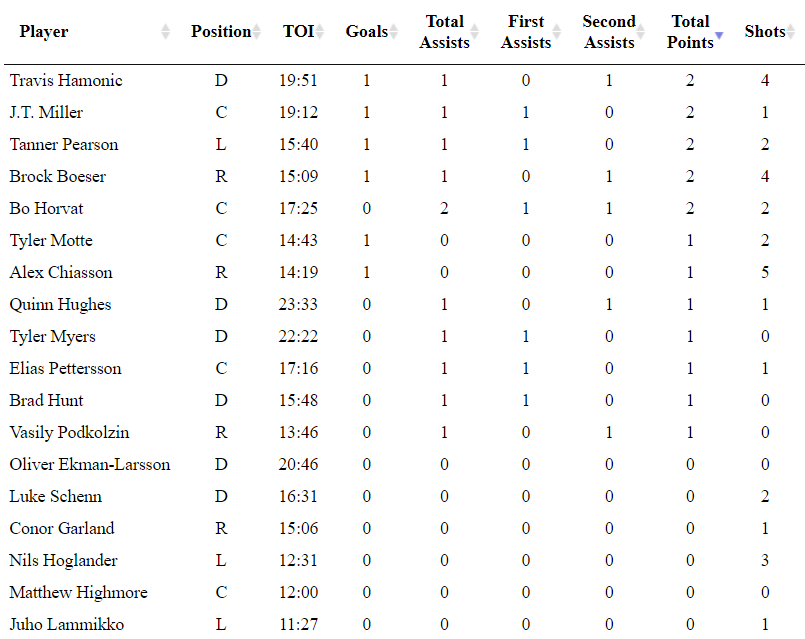 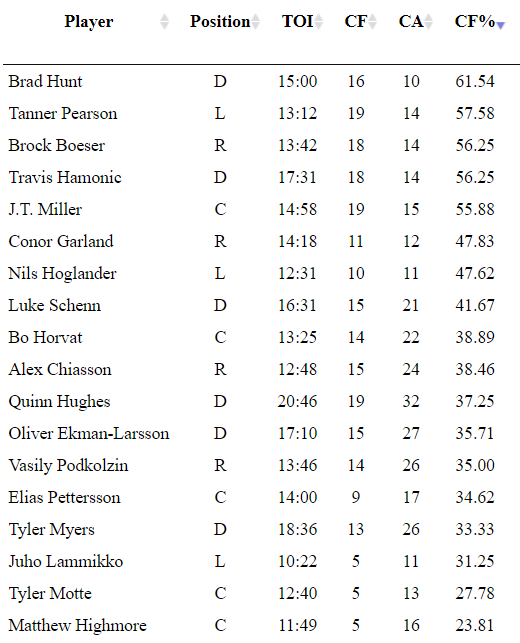 There were a few candidates for the top performer but when you look at play at both ends of the ice, the best player was J.T. Miller. He scored a goal, had a primary assist on Boeser’s goal and was trusted at the end of the game and during the big penalty kill with just under 10 minutes remaining in the game. Miller also won 10 of 18 faceoffs on the night during his 19:12 of ice time.
Demko deserves a shoutout as well as he did allow four goals but was excellent in the final 10 minutes of the game and without him, the Canucks don’t win that hockey game. Demko faced 38 shots and saw 41 scoring chances against him.

The Canucks came out in the third period and worked their way to a big Saturday night win. They scored the equalizer early into the third period and backed it up with a big goal from Myers to give them a lead.
They leaned on their goalie in the third period as the Leafs had 16 shots in the final frame.
Horvat spoke about his goaltender being a huge piece for the Canucks as he held the team in the game during the final 10 minutes of the game.
“He’s been unbelievable for us all year,” said Horvat. “That’s how you go far in the playoffs and that’s how you get to the playoffs–with great goaltending and he’s been unbelievable for us.”
Boudreau also commented on his goalie saying, “Demko in the last five minutes was incredible.”
After taking a big two points from the Leafs, the Canucks now return home for a seven-game homestand that will bring them up to the trade deadline. This will be the homestand that decides how much the Canucks will be selling at the deadline. The homestand gets started on Wednesday with a matchup against the Montreal Canadiens.
Puck drop for Wednesday is scheduled for 7:00 pm and we will see you there!
Uncategorized
Recent articles from Faber