CanucksArmy post game: A hockey game was played tonight and it was lost by the Canucks By Phil Figueiredo
1 year ago
The Vancouver Canucks faced the Winnipeg Jets for the ninth and final time this season in the second half of a back-to-back at Bell MTS Place in Winnipeg. There wasn’t much left to play for — other than pride and players trying to keep a spot in the lineup for next season — as the Canucks were officially eliminated from playoff contention yesterday.
The puck dropped a little late, as the Jets celebrated Paul Stastny’s 1000th NHL game — earning himself some artwork and the majestic silver stick. Classy touch by the Jets giving his kids some mini silver sticks.

Only one lineup change tonight as Braden Holtby was the obvious choice between the pipes with Thatcher Demko playing last night.
Without further ado, here’s what happened in game 51.

Maybe it was the pre-game festivities, maybe it was the one win in their last 10 games for the Jets. Whatever it was, it lit a fire inside the Jets as the Canucks could barely get out of their own zone in the first five minutes. No harm, no foul.
You just knew it was coming. As the Canucks were making a change, Dylan DeMelo made a quick pass from his own zone up to Wheeler. Wheeler tipped the puck perfectly onto Connor’s stick as he blew past Hamonic and slid it past Holtby five-hole. 1-0 Jets.
Not even two minutes after the Jets opened the scoring, the Canucks got their first power play of the night on a too many men call against the Jets. Vancouver couldn’t get anything going on the power play. Not even a shot on goal.
Just one minute after the Canucks’ power play expired, MacEwen was sent to the box for a trip on DeMelo. Winnipeg had their fair share of chances with the extra man, but Holtby made a couple big saves to deny the Jets a second goal.
With just under four minutes to play in the first, Holtby made his biggest save of the game up until that point. Stastny made a crisp pass to Appleton who got in behind the Canucks defence pairing of Edler and Schmidt and broke in all alone on Holtby. Holtby came well out of his crease and stopped Appleton with his blocker. I think Travis Green would’ve challenged the goal had the Jets scored on that play.
Don’t get me wrong, I’ll take the power play’s when they come. But when there are only 40 seconds left in the period, it’s tough to get any sort of momentum going before the horn sounds to end the period.
That’s exactly how the first period closed out, as Wheeler got called for a trip on Rathbone who made a nice move to get around him.
Shots after the first period were 11-6 in favour of the Jets.

The Canucks began the middle frame with 1:20 left with the extra man, where they only recorded two shot attempts.
Pionk took a shot from the blue line which didn’t get through on net. Instead, it took a bounce off a leg and right to Wheeler at the top of the face-off circle. Unmarked, Wheeler skated in on Holtby and deked around him as Edler stood in the crease to protect the pass that never happened. Wheeler slid it past Holtby just over two minutes into the second to make it 2-0 Jets.
Most of this period was played in the Canucks’ end up until this point, and the Jets had no issues with that. As Vancouver struggled to clear the puck from their own zone, Benn received the puck at the blue line and quickly played it over to Wheeler — who one-timed a soft shot towards Holtby. Scheifele got his stick on it and deflected it past the Canuck goaltender to make it 3-0 Jets with 11:37 left in the second period.
The broadcast showed Horvat smashing his stick in half three separate times and that’s exactly how I felt watching this game.
With 1:29 remaining in the period, JT Miller tripped Dominic Toninato and skated right to the penalty box for the Jets’ second power play of the night. I’m pretty sure Miller was sitting in the box before Toninato even got up off the ice.
Hellebuyck had a relatively easy period as he faced 11 shots, none of which gave him any trouble.
Shots after the second period were 21-17 for the Jets.

Winnipeg began the third period with 31 seconds left on the power play. The Canucks prevented the Jets from creating any chances before Miller stepped back onto the ice to get them back to 5-on-5.
If I had a nickel for every time I heard “Canucks can’t clear the zone” tonight, I’d likely have a few bucks. There was an instance early in the third where Myers had nothing but time and sent the puck across his own zone for it to be intercepted at the blue line by Mark Scheifele. Luckily no damage was done, but we’re hearing this happen far too often.
There were a few chances at both ends of the ice, as the intensity in play began to pick up midway through the final frame. Holtby had a puck rattle off the crossbar and made a save in-close on Kyle Connor with no rebound.
Hellebuyck made a great save on Höglander after he received a cross-ice pass on a 3-on-2. Höglander’s shot was high on Hellebuyck which caused a big rebound with no one around to bury it. This was the Canucks’ first shot in over 11 minutes.
Wheeler and Connor created some magic coming up through the neutral zone. Wheeler crossed paths with Connor just over the blue line, and Connor made a beautiful pass in between the Canucks’ defence as Wheeler tapped it home for his fourth point on the night. 4-0 Jets.
The Jets were just toying with the Canucks at this point — as the wheels had all fallen off. Lowry and Appleton battled Hamonic down low in behind the goal as they freed up the puck to Perreault. Appleton got the puck back in the slot and put it past a screened Holtby to make it 5-0 Jets.
There was really nothing else to talk about as this game came to a close. Jets took it by a final score of 5-0 and outshot the Canucks 36-24. Hellebuyck recorded his 24th career shutout in the win. 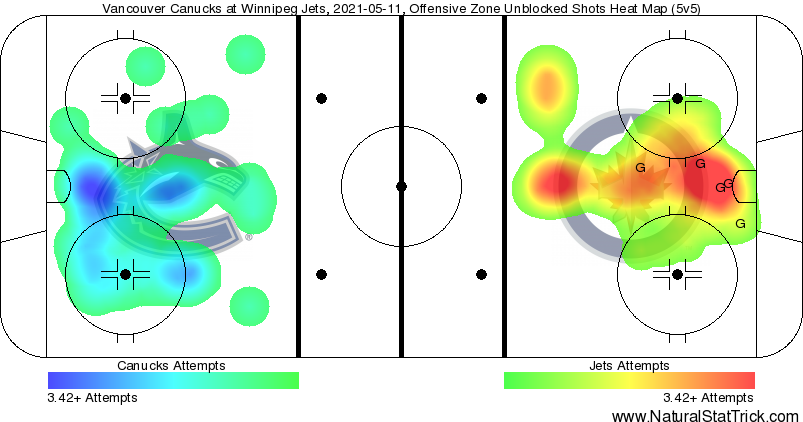 Fill in the blank made another appearance for tonight’s game.
Shaking this year off is something I’ve been preparing myself for all year. But knowing it’s coming, doesn’t make it any easier.
Speaking of which, does anybody need a fourth for Saturday? I’m available.
Where’s my Team Tank at!?

Nils Höglander: For a guy who we weren’t sure would even make the team out of camp, Nils Höglander has been a fantastic addition to the club. I haven’t seen him take a shift off this entire season. Tonight was no different. It wasn’t a great night for any Canuck by any means, but Höglander had a more positive impact over any other player in that lineup tonight.

I enjoyed that game just as much as you did. At this point, the results don’t matter. We all know that. But seeing a better effort put in than what we saw tonight would be appreciated by the fans — the few that will continue watching anyways.
The Canucks are off to Calgary as they will take on the Flames on Thursday for another game with little to no meaning.
Uncategorized
Recent articles from Phil Figueiredo