CanucksArmy post game: Halak puts the team on his back in 3-1 win over the Colorado Avalanche 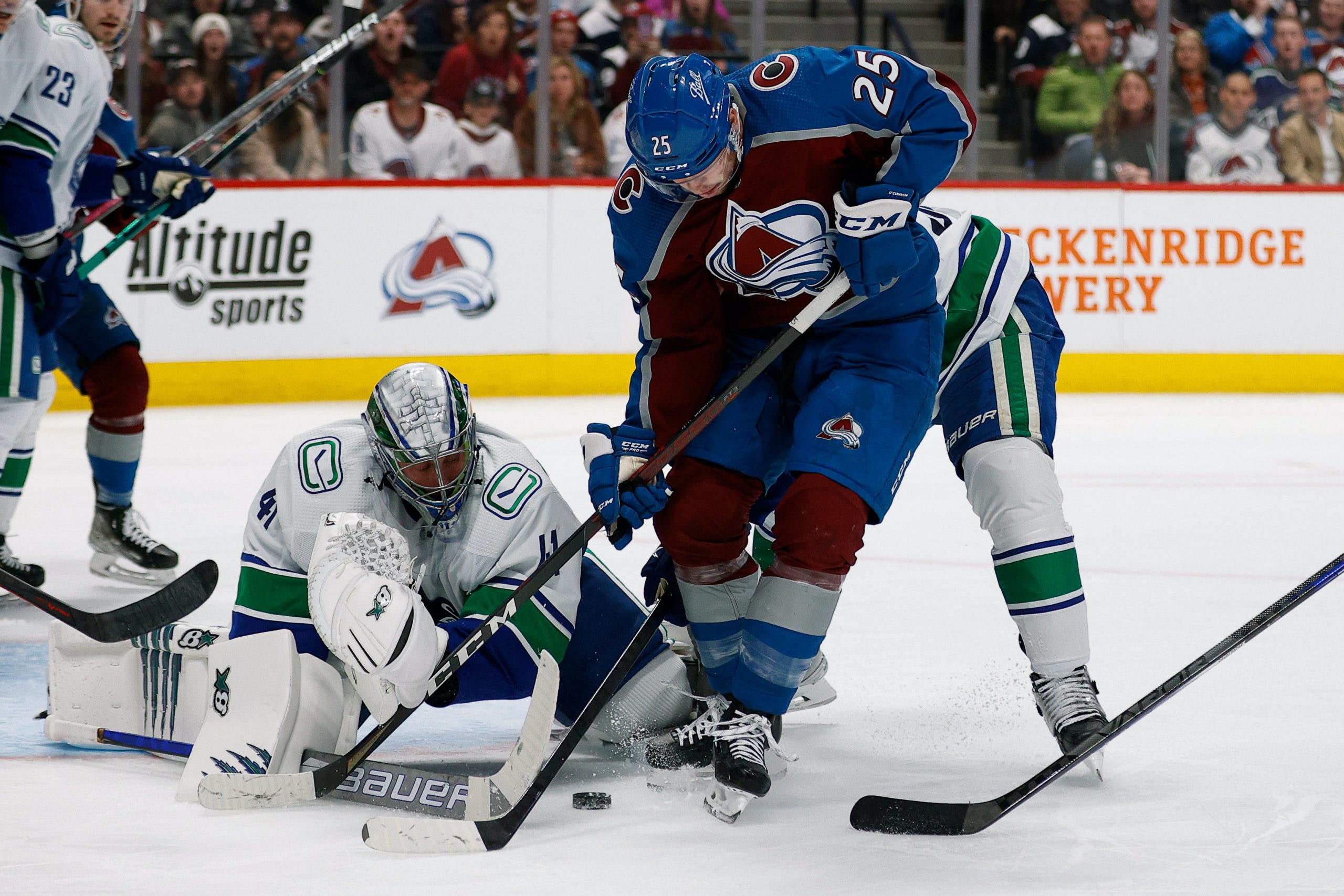 By Faber
8 months ago
Now that the Trade Deadline has come and gone, it’s time to get back to some actual hockey.
The Canucks shipped out Tyler Motte and Travis Hamonic but brought in Travis Dermott and Brad Richardson as their replacements.
It was going to be a tall task for the Canucks as they began their post-deadline action against the best team in the NHL — the Colorado Avalanche.
When it comes to uphill battles, the Canucks put themselves at an even steeper angle by choosing to go with Jaroslav Halak in net to face the Avs. The lineup obviously saw some changes with Dermott being the new face on the back end and the return of Richardson to the lineup.

The road trip was going to test the Canucks and they needed to get a good start from Halak to be in this game. The Avs went with their starter Darcy Kuemper between the pipes and also boasted some of their new faces in the lineup.
It was going to be an interesting game to say the least as the Canucks battled against the cup favourite Avalanche as they held on to their hopes of the playoffs by the tip of their fingernails. It’s time for some Wednesday night hockey as the Canucks kick off a four-game road trip.
Let’s go!

Both teams had scoring chances early with Bo Horvat having a great chance off a rebound and Elias Pettersson firing a wrist shot off Kuemper’s blocker during a two-on-one. Halak had to be good early as he was tested just a few seconds into the game.
There was a lot of back and forth action as the teams exchanged shots and scoring chances. The fast-paced play ended with Quinn Hughes drawing a penalty on Nathan MacKinnon with 12:47 remaining in the period. MacKinnon didn’t like the uncalled slashes that Hughes was giving him while he circled the zone and proceeded to cross-check Hughes to the ice.
The Canucks’ power play was looking good but once they changed to the second unit, Nic Petan took a high-sticking penalty as he clipped an Avalanche player while falling to the ice. We had a short four-on-four stretch before the Avalanche were given 90 seconds of power play time.
Even with the Avs’ potent power play, the Canucks were able to kill off the 90 seconds and get back to five-on-five. Halak was tested on a quality scoring chance just after the penalty expired. He robbed Andrew Cogliano on a back-door feed from Nico Sturm.
Vasily Podkolzin took a knee from Cogliano and Oliver Ekman-Larson stepped up and dropped the gloves in defence of the rookie. The wrestling match resulted in two minutes of four-on-four hockey as OEL and Cogliano got matching minors.
The teams both had some decent chances during the fast-paced play but neither squad was able to skate off to the intermission with a lead.

The Canucks were outplayed but not as bad as some would have predicted. The Avs were able to get their scoring chances but the Canucks countered with scoring chances of their own. Halak was good in the first period and made a few big saves on scoring chances in tight.
We wanted to keep a close eye on Travis Dermott in his Canucks debut. He made all of the plays that presented themselves and did move around the ice with some fluidity. He was the low man on the defence core for ice time in the first period with 4:05 but moved the puck well and was not caught in his own zone.

The Avs had a strong push to begin the period. Their top players were controlling the puck in the Canucks’ zone for extended possessions. Halak was holding his own through the first half of the game and was keeping this potent Avs team at bay.
Halak continued to have a strong performance as the period went on. He made a pair of huge saves just past the halfway point of the period and the teams were locked in a goaltending battle.
The Avs’ power play went back to work when Quinn Hughes took a slashing penalty with just under six minutes remaining.
It was a hectic two minutes and the Avs had chances as the man-advantage expired. Halak continued to play well and the game was scoreless with three minutes remaining in the second.
Hughes took his second slashing call of the game with 2:09 remaining in the period.
The Canucks killed off their third penalty of the game and after 40 minutes, we were locked in a scoreless draw.

Halak was playing some good hockey for the Canucks. He was tested throughout the 40 minutes and came up big multiple times. After a pretty even first period, the Avs had a lot of control in the second. Halak came up big and would need to maintain his level in the third if the Canucks wanted to escape Denver with two points.

Off the momentum built up by Halak, the Canucks came out in the third period and took control. Brock Boeser fired a screened shot off a great pass from Elias Pettersson that flew into the top corner. 1-0 Canucks.
The Canucks continued to build momentum and they built on their lead. Tanner Pearson came down and fired a shot on net during a two-on-one. J.T. Miller followed up and found himself in the crease with a loose puck. He doesn’t miss from there and flipped the puck into the back of the net. 2-0 Canucks.
It was a hot start for the Canucks, who took control of the game in the third period. They opened a door for the Avs when Podkolzin took a penalty with 15:00 remaining in the period.
The Avs power play doesn’t miss four times in a row as Nazem Kadri was able to jump on a rebound and flip the puck over Halak. 2-1 Canucks after the Kadri power play goal.
Matthew Highmore took a massive hit from Kurtis MacDermid that was uncalled and sent Highmore to the quiet room for evaluation. Immediately following the hit, Luke Schenn took a tripping call with 8:48 remaining in the period.
This time, the Canucks were able to kill off the penalty and maintained their one-goal lead with 4:29 remaining.
The Avs pulled their goalie with 90 seconds remaining and put the pressure on the Canucks. The Avs called a timeout with 58.9 seconds remaining and it set up an electric minute of hockey.
Horvat ended the night with an empty-net goal with 17 seconds remaining.
Canucks win 3-1! 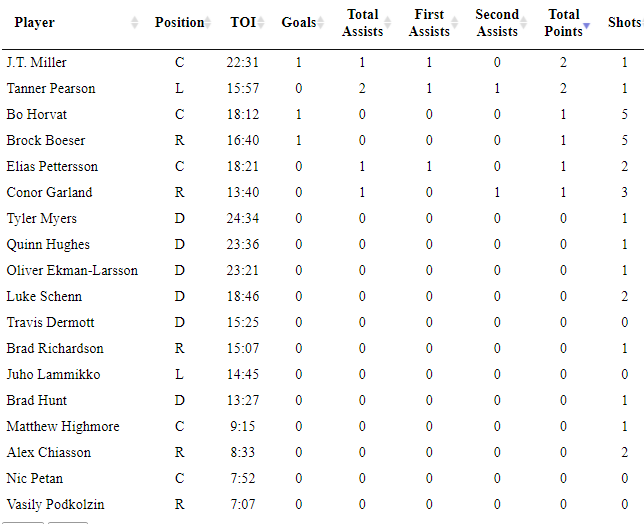 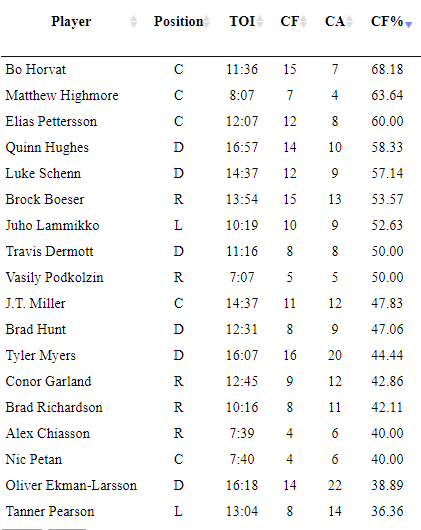 If I told you before the game, you might not believe me. Tonight’s top performer was Jaroslav Halak. He allowed one goal on 33 shots and faced 34 scoring chances. He moved well in his crease and came through in the clutch at the end of the second period and all of the third period.

Miller spoke post game about his goaltender bailing out the team. He said that Halak was a huge reason why the Canucks won. Miller talked about this team not losing when they play their game and skate hard.
“I think when there’s a harder challenge, we play better sometimes,” said Miller. “That was the ballsiest effort we’ve had this season. We just tried to rise to the occasion today, we’re still not out of it. We’re in it, we feel good about where we are. When you start to think you’re out of it, you’re out of it but there’s none of that in our room.”
It was somewhat of a shocking performance from the Canucks. They were able to skate with the best team in the league and came out of Denver with a win on the back of their backup goaltender.
The Canucks are right back to it on Thursday night when they travel to Minnesota to face the Wild. It’s a short road trip with a lot of games in a small amount of time. The team came out with fire in their first game of the trip and will look to build on that against Minnesota.
Puck drop is at 5 pm on Thursday, we will see you then!
Uncategorized
Recent articles from Faber