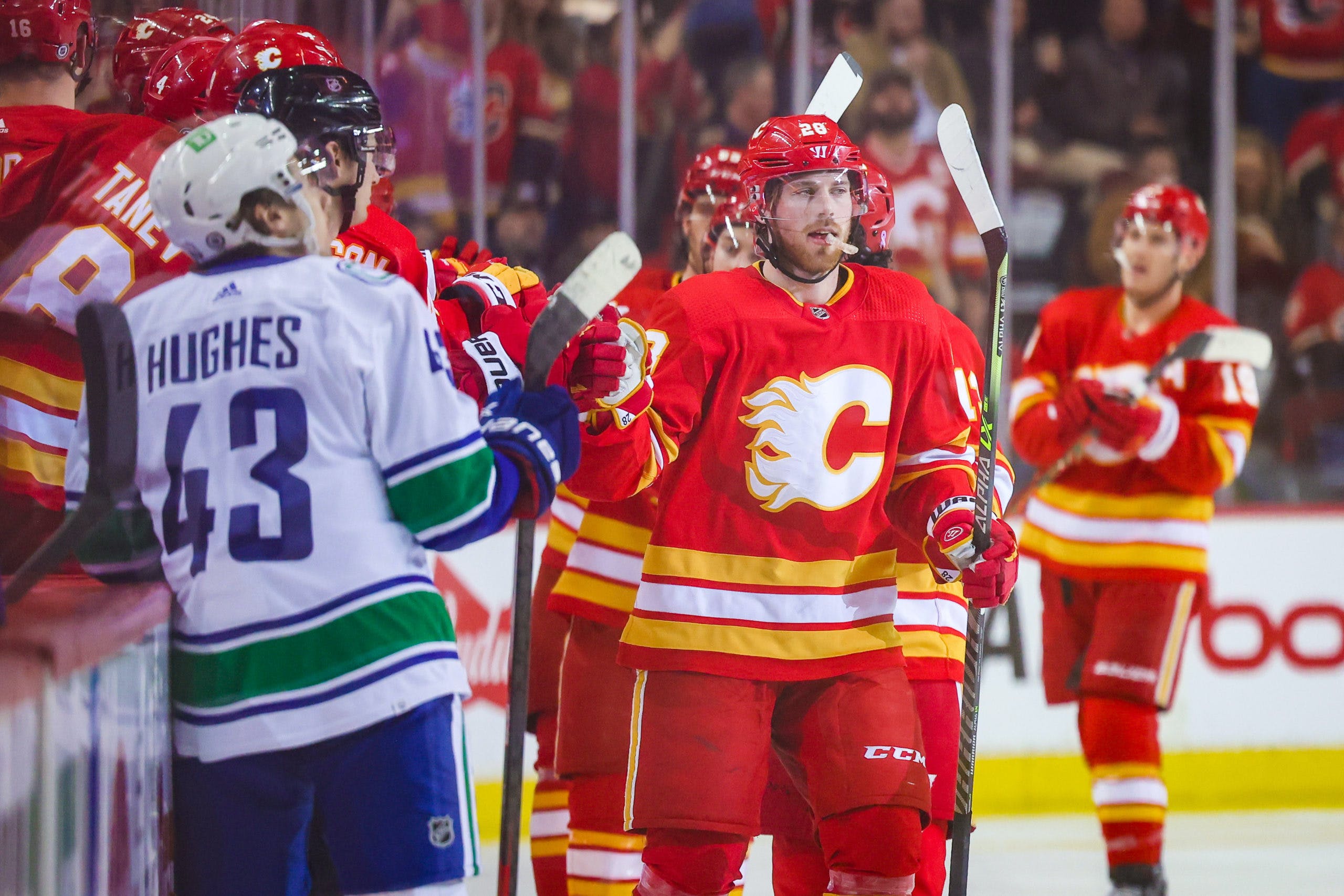 By David Quadrelli
9 months ago
With their playoff odds coming into tonight’s game sitting at around 1%, the Vancouver Canucks visited the Calgary Flames for their 78th of 82 games on the season.
The Canucks certainly didn’t control their own destiny coming into tonight, and would need a win to keep their already razor-thin playoff hopes alive.
Here’s how they lined up in this one.

J.T. Miller had a good one-time chance after a feed from below the goal line into the slot from Conor Garland, and Elias Pettersson’s line had a good shift early on, and the Canucks even led the Flames in shots for the majority of the first, but the Flames’ chances were of a much higher quality.
The Canucks were certainly thankful to get the Thatcher Demko they know and love in the first period.
The first period felt like a “blink and you’ll miss it” type of ordeal.
There was a whole lot of nothing as the teams went back and forth without much success.
When you consider — given their struggles at the start of games this season — that the Canucks faced off against the team with the highest first period goal differential in the league, escaped scoreless and lead in shots for most of the period, the Canucks’ first period went about as well as one could hope.
To put it simply, this was a boring first period, and there’s not much else we can say other than that.
“I didn’t think we had a lot of emotion going in,” said head coach Bruce Boudreau post game. “I mean the first period was pretty dull on both sides.”

The Flames picked up the first power play of the game after Will Lockwood inadvertently high-sticked Elias Lindholm two minutes into the second frame.
The Flames struck quickly, and it was Lindholm who beat Demko glove side to register his 40th goal of the season. 1-0 Flames.
Then just moments later, the Flames struck again.
This time, it was Dillon Dube scoring to make it 2-0 Flames in a hurry.
Demko made some fantastic saves as the Flames kept pressing with the Canucks not appearing to have much of an answer for the Pacific Division leaders.
Much like the first period, the second period was quite boring, only this time, the Canucks also got scored on twice and looked much worse than they did in the first.
Quinn Hughes gave the Canucks some late-life when he took a nice feed from Vasily Podkolzin and roofed it glove side on Dan Vladar to trim the Flames’ lead to 2-1 heading into the third period.

Thanks to a skirmish at the end of the second period between Oliver Ekman-Larsson and Matthew Tkachuk, we were treated to some 4-on-4 hockey to open the third.
The Canucks began with some brief zone time and a quality-looking chance before the teams were back to 5-on-5.
Milan Lucic found himself on a partial breakaway, but Demko answered the bell to keep his team within a goal.
This opened the door for the Canucks to storm back, and Conor Garland busted out the mini stick to tie this game at 2-2.
Brent Ritchie came back and scored less than a minute later to regain their lead and make it 3-2 Flames.
For a game that was rather uneventful and dare we say it again, boring — this was shaping up to have a wild finish.
The Canucks were awarded their first power play of the game after Mikael Backlund was called for cross-checking Alex Chiasson in the numbers.
The Canucks generated a couple of quality chances, highlighted by an Elias Pettersson one-timer.
Back at evens, Travis Dermott did an excellent job to break up a 2-on-1 with Matthew Tkachuk and Johnny Gaudreau streaking down on him, and then Brad Richardson took a tripping penalty to put the Flames on the power play with a hair over ten minutes remaining in this one.
The Canucks managed to kill off the penalty, but then Dillon Dube scored on the backhand after a turnover by Luke Schenn. 4-2 Flames.
Then a Nikita Zadorov point shot hit Tyler Myers in front and trickled past Thatcher Demko to make it 5-2 Flames.
WIth 5:49 to go, and down by three, the Canucks pulled Demko for an extra attacker in a last-ditch attempt at keeping their playoff hopes alive.
J.T. Miller took a feed from Elias Pettersson and one-timed a shot that rang off the post behind Vladar as the Canucks continued to press late.
Pettersson, who had been rather quiet up to this point in the game, moved in on the rush and wired home a wrister to score his 32nd of the season, and make it 5-3 Flames with two and a half minutes to go.
That would be all she wrote, however, as Johnny Gaudreau netted the empty-net goal to make it 6-3 Flames. 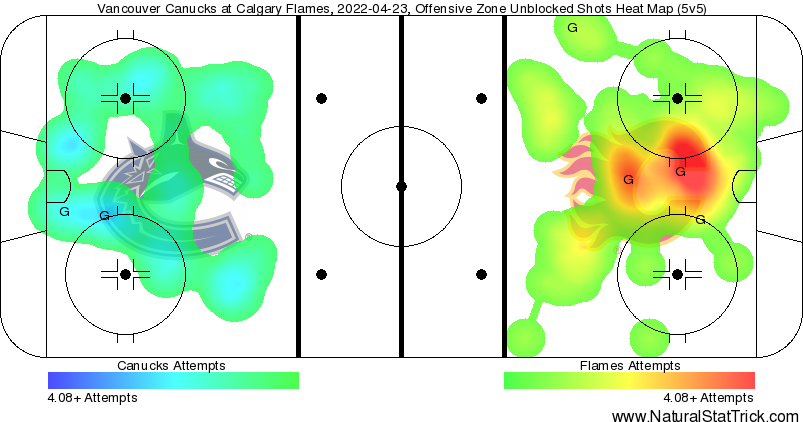 The Canucks lost, and although their effort since December was valiant and certainly admirable, they are well aware that tonight’s game was essentially the nail in the coffin.
“Disappointed, but what are you gonna do?” said Bruce Boudreau when asked to reflect on the game. “It’s been a hard push, and we didn’t get where we wanted to go, so [I’m] disappointed. We pushed from December 5th till now and I expect us for the next three games to keep pushing again. But I mean, we know that our ultimate goal is probably not going to be reached.”
We couldn’t have said it better ourselves, and are excited to begin to turn the page toward wall-to-wall draft and offseason coverage of this team.
Uncategorized
Recent articles from David Quadrelli