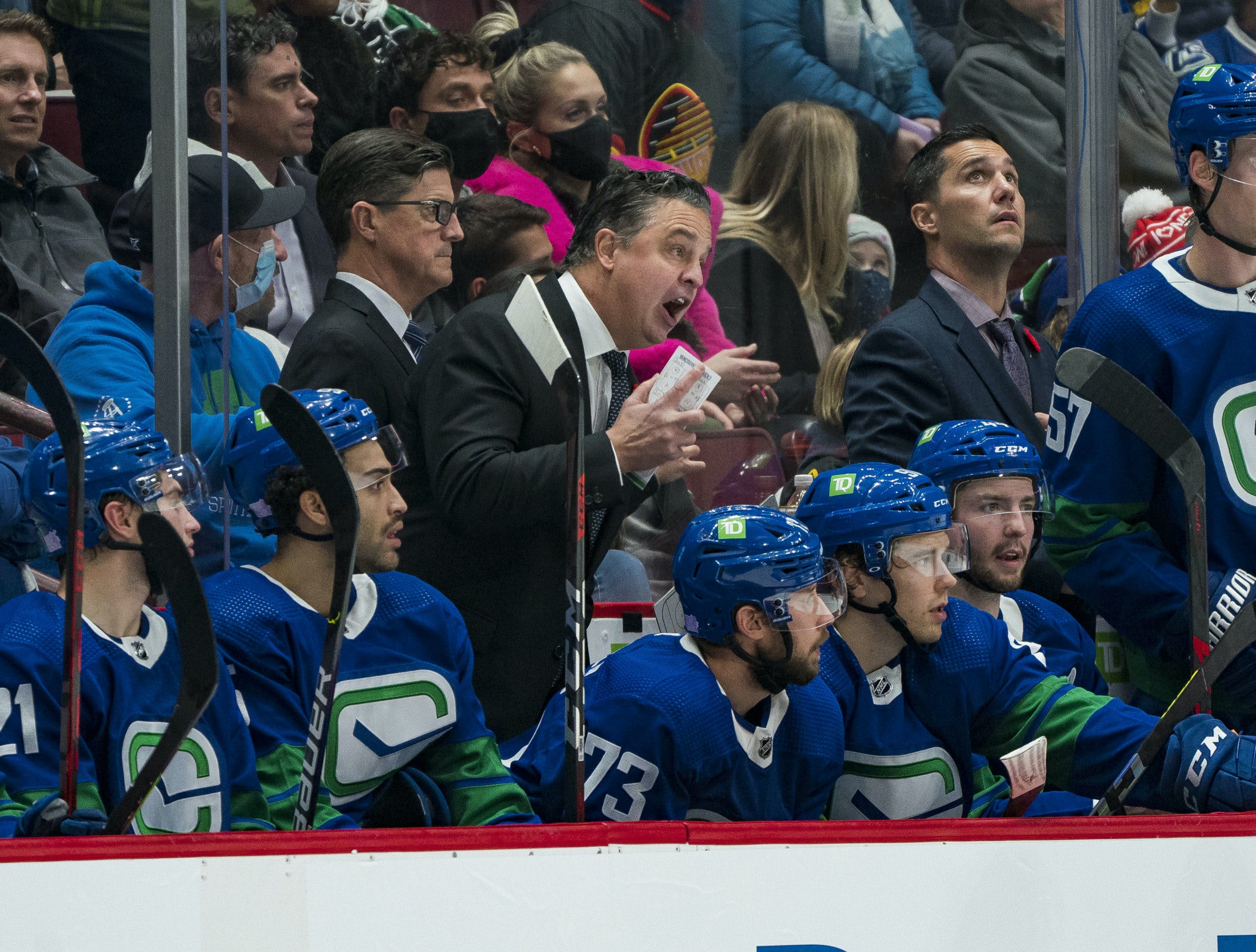 By David Quadrelli
1 year ago
The Vancouver Canucks were back in action tonight for a game against the Anaheim Ducks who came into tonight as winners of their last four games.
The Canucks, on the other hand, were coming off a huge victory over the Dallas Stars in which their incredibly stagnant power play looked dangerous for the first time in a long time.
Tonight was a chance for the Canucks to finish this seven-game homestand on the right note.
Let’s do this!

Jaroslav Halak started in a goal for the Canucks for the third time this season, and John Gibson tended the crease for Anaheim at the other end.

Led by the Lotto Line, the Canucks controlled play early on and looked dangerous.
Tanner Pearson stripped Ryan Getzlaf at the Canucks’ blueline penalty Manson
PP1 good movement, shots Hughes caught Gibson by surprise and hit the post
11 minutes remaining, Garland huge plays elusive
Hughes took a hooking penalty with just under ten minutes remaining. Bo Horvat was on the penalty kill, as the PK has gotten absolutely crushed in the faceoff dot.
The Ducks managed to convert after Cam Fowler took a shot that found its way through traffic and past Halak to make it 1-0.
Neither of the teams managed to break through at 5-on-5, and in the final minute of the period, J.T. Miller took a holding penalty. Fans held their collective breath as the Canucks’ penalty kill personnel hopped over the boards for the next 50 seconds to close out the first frame.
The penalty killers succeeded, and the Canucks went to the dressing room down by one with over a minute left to kill in the second period.
All things considered, this was probably one of the best first periods the Canucks have played this season.
They were hungry on the forecheck, made smart and quick passes, and most importantly, the power play looked dangerous.

The Canucks managed to kill off the rest of the Miller penalty, and even had a decent look at the other end whilst shorthanded after Justin Bailey used his speed to create a chance off the rush.
Then just three minutes after, Tanner Pearson took a hooking penalty to send the Ducks back on the power play.
The Canucks’ first shorthanded group of Miller, Bailey, OEL, and Myers managed to get a decent look at the other end after Miller broke into the Ducks’ zone and found a streaking OEL who ripped the puck just wide.
The Canucks managed to kill this one off as well to make the Ducks 1-for-3 on the night early in the second.
The Pearson-Horvat-Höglander line generated all sorts of pressure and opportunities on their first shift after the kill. It included a Höglander takeaway as the Ducks tried to breakout, a post hit by Tanner Pearson, and a wide-open Höglander calling for a one-time pass.
As was detailed by The Athletic’s Thomas Drance during the first period intermission, the Horvat line has not only been the Canucks’ best line at 5-on-5 this season, but they’ve also been one of the best in the league at even strength.
The line continued to look good in this one, but still had nothing to show for their efforts as this one remained 1-0 Anaheim at the halfway point of the second period.
Horvat created a golden opportunity but a sprawling Gibson denied the Canucks’ captain on what would have been the game-tying goal.
Halak made his best save of the first two periods when he denied the red-hot Troy Terry with a — dare I say it — sprawling kick save and a beauty on a rebound.
Much like the first period, the Canucks played a strong game in the second, they just weren’t getting the bounces to go their way.
Heading into the third down by a goal, the Canucks were looking for a comeback to close out their first homestand of the season.

Roughly two minutes into the third, Elias Pettersson and Trevor Zegras took offsetting penalties after getting tangled up with one another in the neutral zone.
At 4-on-4, Conor Garland excelled. He and Horvat spent almost all of their shift in the Anaheim zone, but again, couldn’t convert on any of their opportunities.
The teams went back to even strength, but that didn’t last long.
Trevor Zegras went right back to the box after taking his frustrations out in the form of a slash on Kyle Burroughs. The Canucks’ power play went back to work for the second time tonight, and boy oh boy, did they ever need to convert.
The power play moved the puck around, got a one-timer off the stick of Elias Pettersson, but a lack of traffic meant Gibson was able to handle it with ease.
The power play was unable to convert, and the Ducks remained up by a goal as time dwindled down.
At the 10:45 mark of the third, the Ducks scored a goal after a rebound off of Halak deflected off of J.T. Miller and just over the goal line.
The officials didn’t see the goal at the time, so the two sides continued playing for nearly two minutes before the video room in Toronto called for the horn to be sounded, which means that they saw something the officials didn’t. It was close, but it’s hard to deny that puck fully crossed the line. 2-0 Ducks.
After another strong shift from the Horvat line in which the Canucks managed to change personnel on the fly without ever losing possession of the puck, the Lotto Line capitalized on a chance after J.T. Miller let go of a wrister from the point. 2-1 Ducks with just over six minutes remaining.
Late in the game, Bo Horvat was double-shifted. Garland was up to his usual spin-o-rama tricks and the trio of Podkolzin-Horvat-Garland had a flurry of chances late before going for a change and welcoming the Lotto Line back onto the ice.
After a TV timeout, the Canucks sent the Podkolzin-Horvat-Garland line right back out, and then the official made a call that essentially ended the Canucks’ chances when Jaroslav Halak was called for a phantom trip.
Here’s the play. You be the judge:
Did their skates make contact? Sure.
Is Halak just trying to make a save after losing his net a bit? Absolutely.
Should that have been a call? Especially at this stage in the game? No, and no.
Travis Green was very vocal in his displeasure with the officials at the time of the call, but didn’t talk much about it post game, because Elias Pettersson took it upon himself to make it a moot point.
With 53 seconds to go, shorthanded and with the Canucks’ net empty, Pettersson took a shot that found the back of the net on the Canucks’ 40th shot of the game. 2-2.

If you’re a Canucks fan, you know how much fun this team is to watch during 3-on-3 overtime. Their possession-first style of play and dynamic personnel results in extremely entertaining overtime hockey.
The Canucks controlled the majority of the first two minutes, and aside from one Anaheim chance off the rush, it really felt like the Canucks were in the driver’s seat.
After the Ducks had five skaters — yes you read that right — on the ice after a sloppy change, Bo Horvat found himself on a breakaway, but Gibson stood tall once again.
Shortly after, Jamie Drysdale made a solid play to free up the puck and spring his team the other way on a3-on-1, and you can probably guess how this story ends.
3-2 Ducks. The Canucks forcing overtime in this one says a lot about them as a team. It would have been easy for them to back down, feel sorry for themselves, and chalk up their loss to a red-hot Gibson simply being too hard to score on.
They played a solid game, and they know it, too. Post game, J.T. Miller stressed the need for the Canucks to continue to play the way they did tonight and the way they did Sunday against Dallas.
Doing the right things defensively at 5-on-5 is going to lead to scoring, and this team certainly has a lot more fight left in them.
While there are certainly positives to take away from the way the Canucks played at times during this homestand, it doesn’t change the fact that going 2-4-1 in your first homestand of the year is a bit disastrous. Playing the right way and doing the right things is great, but it doesn’t mean anything if you don’t get the results.
The Canucks will now head out on the road for a three-game road trip, the first of which will be played on Thursday in Colorado against the Avalanche. Puck drop is at 6 PM Pacific time at Ball Arena.
Uncategorized
Recent articles from David Quadrelli