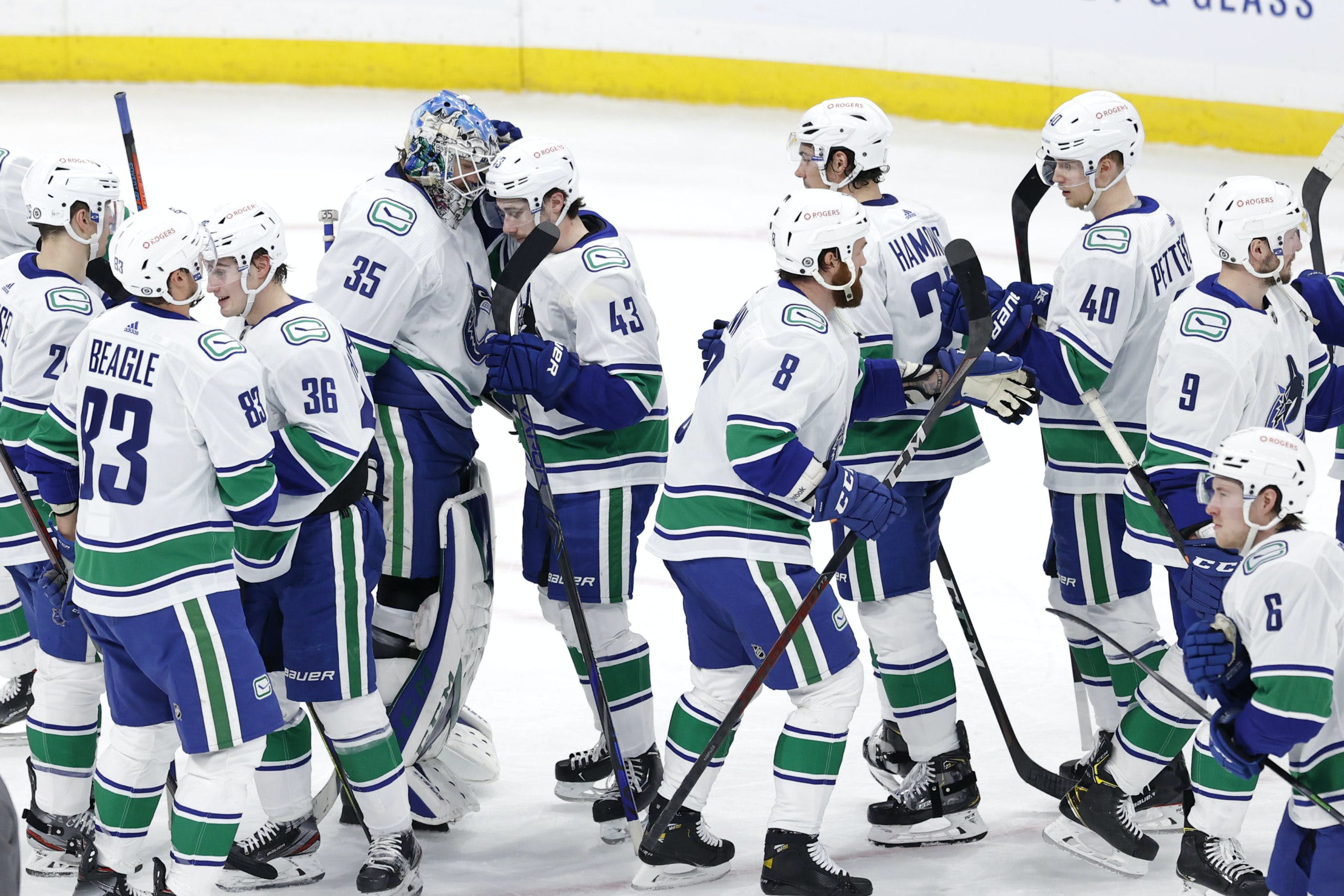 By Shu Lei Wu
1 year ago
After an abysmal month of February in which the Vancouver Canucks went 2-9-2, the team came into Monday evening hoping to start off the new month with a win. On the heels of a shaky 0-3-1 homestand, the Canucks faced off against a rolling Winnipeg Jets team on a four-game win streak. This time, the Canucks got rid of their Sprite jerseys and their losing ways, beating the Jets 4-0 on the first of a brief two-game road trip in Manitoba.

Travis Green made no major changes to the lineup for the Canucks after their 3-0 defeat to the Oilers last Thursday, with Jayce Hawryluk drawing out of the forward group after an underwhelming debut in favour of Zack MacEwen.
The big change-up for the Canucks was supposed to come on the power play set up, where Pettersson and Boeser were slotted in practice to start on their downhill sides in the hopes of restarting a power play that went 1 for 13 in the past five games. The new setup (shown below) reduces the one-timer options to Hughes at the point and Horvat in the bumper spot but allows Pettersson and Boeser to start high in the zone and attack the net with speed while also keeping passing lanes open. 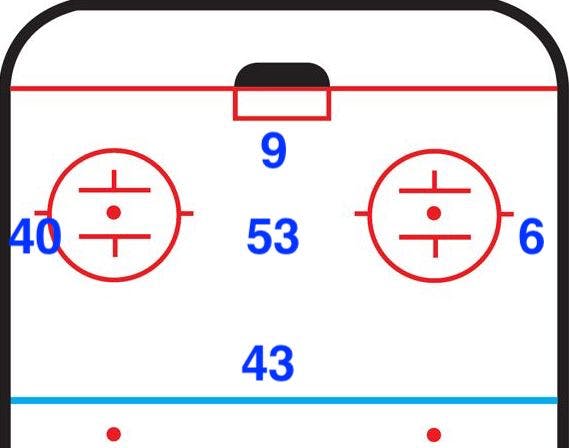 Via Harman Dayal of The Athletic
Additionally, Jake Virtanen found himself on the second power play unit, an area where he found some success last season.
Thatcher Demko got the nod between the pipes for his third consecutive start, while Connor Hellebuyck got the call for the Jets. Game on!

After a relatively quiet start, the Canucks struck twice in quick succession courtesy of two deflected Nate Schmidt point shots. The first one came 8:28 into the opening frame when Schmidt got a one-timer on net following an accidental deflection by Andrew Copp for the Canucks’ first tally. Most importantly, however, the goal ended Brandon Sutter’s assist drought at 24 games.
18 seconds later, J.T. Miller tipped another Nate Schmidt point shot to give the Canucks the two-goal advantage.
The Canucks got a chance on the power play just over halfway through the first period to show off all the anticipated changes to their first unit set up; the only problem was that the first unit never got a clean entry to set up in their new shape. All was not lost, however, as the second unit cashed in on their second goal of the season through yet another deflection, this time from Nils Hoglander.
As any seasoned Canucks fan would know, a 3-0 lead is safe as houses, so at this point, there really wasn’t much to be worried about.

After an exciting first period, the second was pretty much devoid of any major chances. Boeser had a big chance from a generous bounce off the end boards but was denied by a desperate Hellebuyck sliding to his right.
At one point, Hoglander did find himself behind the Jets’ net with lots of time and space, and to the joy of all Canucks fans, he tried the Michigan. Unfortunately for Hoglander, he bobbled the puck and wasn’t able to pull off the move. Don’t be surprised if he gets one off before the end of the season though.
Demko made a couple of big saves to keep his shutout bid alive and the period ended with the Canucks still up 3-0.

As one might expect, the Jets made a big push in the third, but Demko stood tall and made a number of remarkable saves. The Canucks also got another chance on the man advantage but did not use the new setup with Pettersson and Boeser on their strong sides. So much for that!
As mentioned, Demko made a few key saves, including this one off a tipped shot by Blake Wheeler:
Then, with about 5 minutes left in the game and the Jets’ net empty, a point shot from Neal Pionk hit the post and ricocheted to Kyle Connor, whose shot was partially blocked by Jordie Benn before being saved by a sprawling Demko.
The Canucks eventually took advantage of the empty net situation, as Pettersson and Boeser combined to intercept a Pierre-Luc Dubois play on the side boards before Pettersson skated the puck into the empty net to secure the win.

Gameflow from Canucks vs Jets March 1, 2021 (courtesy of naturalstattrick.com) 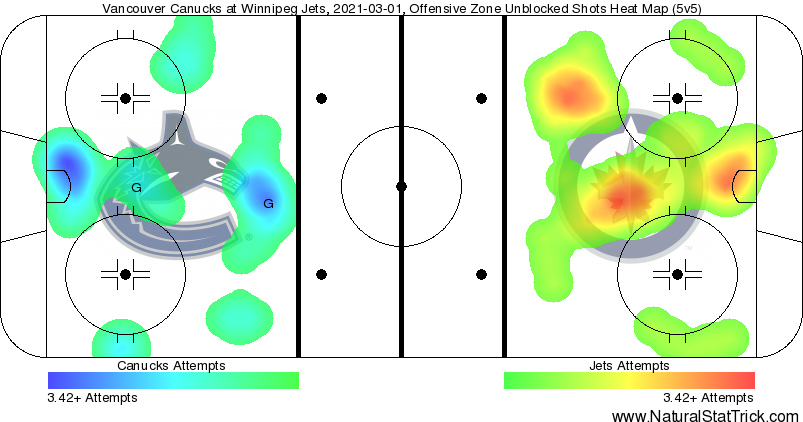 Heatmap from Canucks vs Jets March 1, 2021 (courtesy of naturalstattrick.com)

Thatcher Demko
Thatcher Demko looked like his bubble self tonight and posted 27 saves in the first shutout of his career. He wasn’t really tested with difficult chances early on in the game but made a few key saves after the Canucks went up 3-0 to make sure that there was no collapse tonight. Based on the way the Canucks have rotated their goalies this year, Demko is unlikely to get the start for tomorrow’s rematch, but his performance should have done enough to cement his spot as the team’s starting goalie moving forward.
Nate Schmidt
His muted production to start the season got a lot of attention in this market, so it was nice to see Nate Schmidt post his first two-point game with the Canucks by chipping in with a goal and an assist for the Canucks’ first two goals. Schmidt also made a number of smart passes throughout the game, and overall looked pretty solid alongside Alex Edler on the backend.

After a rough February, the Canucks will hope that Monday’s win against the Jets will mean a more prosperous month of March. The team was a positive benefactor of regression on the night and finally experienced being on the right side of a few deflections as well as an all-too-rare PP2 goal.
The Canucks posted an NHL low 94.2 PDO last month, which is a measure of on-ice SH% and SV% added together that should theoretically be at 100 across the league. Anything over 100 means you’re getting a bit lucky, and anything under means the opposite. In saying that, the Canucks were due some good bounces and tonight was the night. And say what you want about the Canucks’ ability to keep 3 goal leads, but tonight it never truly felt like the Jets had it in them to storm back.

The Canucks will look to start a winning streak of their own tomorrow after at 5 pm Pacific Time in a rematch against the Jets at Bell MTS Place.
Uncategorized
Recent articles from Shu Lei Wu