CanucksArmy post game: Canucks get shut out by the Jets while Hoglander and the refs start a battle 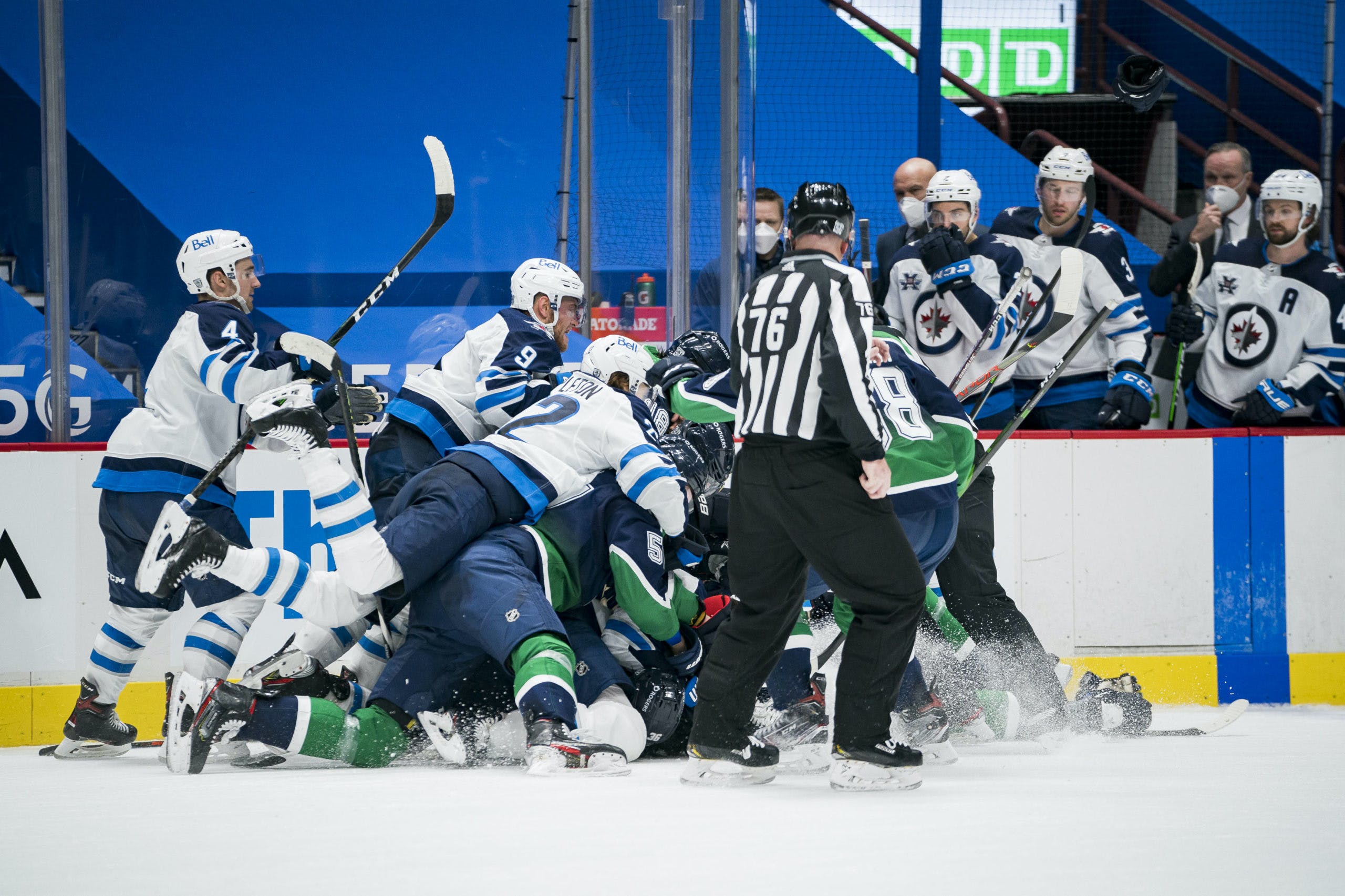 By David Quadrelli
1 year ago
Fresh off a solid effort against the Calgary Flames on the road, the Vancouver Canucks were back at home and looking to get off on the right foot in game one of their four-game reverse retro jersey homestand.

As expected, the Canucks made no changes to the lineup that led them to victory against Calgary, aside from Thatcher Demko getting the start over Braden Holtby.

It was fairly back and forth in the early goings of this one, with the Sprite cans — I mean Canucks — controlling the puck for the majority of the first opening eight minutes.
Tanner Pearson had a doorstep chance early on, but sent the puck high over the net.
Unsurprisingly, Brock Boeser looked dynamite early on. He was moving his feet a ton and creating chances for his team. He refused to allow his team to lose possession of the puck, and was like a dog on raw meat early on.
When you’re hot, you’re hot. After five minutes, the Canucks looked like they were going to pick up right where they left off from the Calgary game.
Then things went south.
The Canucks struggled to complete passes, and started to look like their old selves again; and not their old selves that took Vegas to seven games, it was the version that got blown out by the Montreal Canadiens a few weeks back and had everyone questioning everything.
Mark Scheifele capitalized on a turnover between Alex Edler and JT Miller at the Winnipeg blueline, and converted on his breakaway opportunity. 1-0 Jets.
The Jets continued to turn up the pressure, and went to the power play after Loui Eriksson took a lazy hooking penalty off of a defensive zone faceoff.
The Jets came close, but Demko was dialled in. The Canucks also got some puck luck however, as this one narrowly missed the net. It likely would have been a high stick anyway, but the Jets were coming close.
Matters only got worse, as just minutes after killing off the Eriksson penalty, JT Miller put the Jets back on the man advantage after getting his stick in the face of Nikolaj Ehlers with roughly three minutes to go.
They killed that one off as well, and Miller immediately stepped out of the box and was joined by his lotto line teammates.
The final minute was hands down the best shift of the opening 20 for the lotto line, and may have been the best minute of hockey the Canucks played in the entire period. As it so often has this year, it all started with Brock Boeser being tenacious on the puck and creating opportunities for his linemates.
They came close, but no cigar.

This was a chippy game where the teams went back and forth, with neither showing much structure, and that was especially true of the second period.
The Canucks came close a few times in the opening ten minutes of the second, with their best chance coming off the stick of Adam Gaudette. Unfortunately for him and the Canucks, he put it just wide, and the Jets remained ahead by one.
Demko was dynamite all throughout this one, but in the second period, this was especially apparent. He made some incredible saves, including this one:
Without Demko, the Canucks could have easily found themselves down by at least a couple during the second period.
Laurent Brossoit was almost equally as good at the other end of the ice, meaning this one was a low scoring affair through 40 minutes of play. He made this save on a Nate Schmidt breakaway to keep his clean sheet in tact:
The Canucks had one final chance to even the score heading into the third when Paul Stastny took a tripping penalty with a little over two minutes remaining in the middle frame.
The second unit ended up creating more chances when all was said and done, and the Canucks remained down by a goal heading into the third.

The Canucks looked like they were on a mission to even this one up. They had more pep in their step than they did through the opening forty minutes of play, and generated some solid chances early on.
The Canucks’ first, second and third lines controlled play for their first few shifts of the period, and generate more than a couple grade-A chances, but it felt like luck was on the Jets and Brossoit’s side.
Pucks were tipped wide, Brossoit made stops on shots he couldn’t see, and the Canucks just couldn’t seem to break through.
Winnipeg’s chances in the third came off much less developed plays than what the Canucks were stringing together at the other end, but regardless, the Canucks needed Demko to be sharp all night long.
There was a sequence that took place with about five minutes left in the third. As he so often does, Hoglander had a solid shift in the offensive zone, and capped it off by going hard into a board battle with Derek Forbort. Hoglander appeared to lead with an elbow on a reverse hit into Forbort, before skating away and going into another puck battle.
As the title suggests, I think Hoglander, in collaboration with the refs, started a battle that still hasn’t been properly settled.
Forbort skated over to Hoglander, giving him three hearty cross-checks, a two-handed slash, before delivering one final cross-check that made Hoglander tumble to the ground looking at the ref with his arms raised wondering why he hadn’t got a call.
The Canucks bench sure wasn’t pleased with it.
Hoglander was fine, and went just as hard into the next board battle when given the opportunity, but if the refs make a call there, the Canucks are given a man advantage with a little over five minutes remaining.
Instead, the Canucks battled, pulled their goalie, and then got scored on with a little over a minute remaining. 2-0 Jets.
But the story doesn’t end there.
Forbort was clearly still bothered by the sequence, because as soon as he could get his hands on Hoglander again, chaos ensued:
The Canucks didn’t end up with the man advantage after all was said and done.
Travis Green said he was “a little bit” surprised that his team didn’t end up with the man advantage after the kerfuffle. “I’m not surprised,” said Green. “You’ve got a big guy going after the smallest guy on the team, our team is going to respond to that.”
“I really liked the response from everyone to protect Hoglander. We’re a team, we’re in this together,” said Elias Pettersson.

Travis Green. The Canucks head coach is great at talking to the media. He’s meticulous with his answers, and there’s a reason quotes of his are rarely the headlines of articles. He knows how to pick his spots. Green is our top performer of the night for avoiding a fine by not ripping into the refs as a former Canucks head coach would have done.
Thatcher Demko. In all seriousness, it’s hard to give top performer honours to anybody other than the goaltender when the team gets shutout. He did his part in keeping them in this one, and in the end, just didn’t get the support he needed. 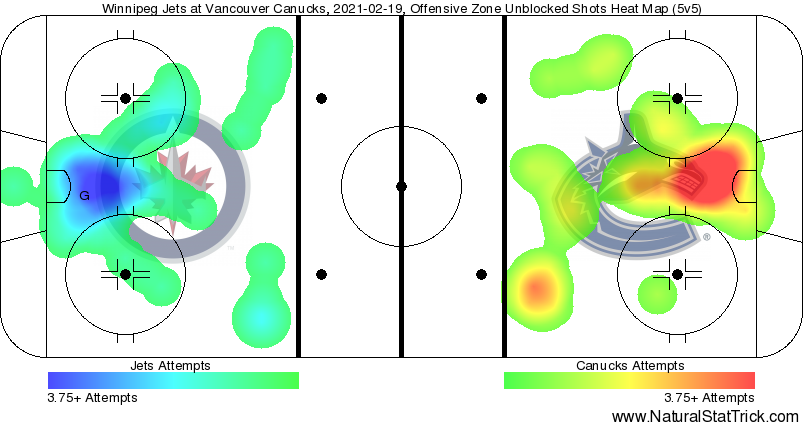 This section is quickly becoming the Mr. Booth highlight reel.
It’s good to have JPat back in the building:
The Canucks, in partnership with TD, ran a contest tonight to give away a reverse retro jersey for each goal the Canucks scored.
They instead announced that they would give three jerseys away to three lucky fans, so this one had a happy ending.

Wrap up and a couple of closing thoughts

These teams will do it all again on Sunday night, and it will be interesting to see if the Forbort-Hoglander battle will be settled in that game.
When the refs don’t police the game, the players do it themselves, and that’s exactly what we saw tonight.
Uncategorized
Recent articles from David Quadrelli