By David Quadrelli
9 months ago
The Vancouver Canucks were back in action tonight with their season hanging on by a thread.
The e’s are appearing next to more and more teams’ names in the standings, and the Canucks were in desperate need of a regulation win tonight.
Let’s see how they did.

The game began with an Oliver Ekman-Larsson hooking penalty which sent Vegas to the power play early on.
The Canucks killed off the Golden Knights’ man-advantage, but as they so often have this season, the team was hemmed in their own end early and were bleeding chances early.
And as has so often been in the case this season, this one could have gotten ugly early on if not for the play of Thatcher Demko.
Alex Pietrangelo picked his spot, and on the Golden Knights’ 10th shot of the game just eight minutes into this one, it was 1-0 Vegas.
The Canucks woke up a bit after the first goal, and were able to sustain some pressure after Ben Hutton — who appeared to be doing his best impression of a current Canucks defenceman — turned over the puck in the neutral zone and allowed the Canucks to break back in.
Jonathan Marchessault managed to penetrate the Canucks’ defence after a lapse of focus from Travis Demott allowed him to move in and snipe one on Demko to make it 2-0 Vegas.
Elias Pettersson took a double minor for high-sticking after his stick rode up in the face of Shea Theodore.
Whilst shorthanded, Bo Horvat moved in on a breakaway and attempted to go five-hole on Lehner. Unfortunately for the Canucks and their captain, the Vegas goaltender was up to the challenge and turned the chance aside.

The Canucks killed off the remaining seconds of the Pettersson penalty but still forced Demko to stare down a breakaway just 20 seconds into the period to keep this a two-goal game.
After a performance where he certainly didn’t look great, Tucker Poolman departed in the second period, and the Canucks were down to five defencemen.
It’s certainly not a good sign, as Poolman has been dealing with migraines and headaches since January. Since then, he has dealt with multiple setbacks in his efforts to return, and this was yet another one.
Rondbjerg took a delay of game penalty and gave the Canucks their first power play opportunity of the game with just over seven minutes remaining and still down by a pair.
Although they generated three shots, including a Quinn Hughes point shot that was deflected in front of Lehner, the Canucks couldn’t break through and remained goalless in this game.
Brock Boeser was on the receiving end of some friendly fire when Elias Pettersson attempted to throw a big hit along the glass on Ben Hutton, but caught what appeared to be Boeser’s right wrist in the process.
After 40, the Canucks entered the third period down by two goals, and down by two men.

There weren’t many wins for the Canucks tonight, and there likely won’t be many more down the stretch run.
That’s why it was so nice to see them get one when Brock Boeser was out for the beginning of the third period in his usual spot on Bo Horvat’s wing.
Another win? J.T. Miller recorded his 200th point as a Vancouver Canuck after Ekman-Larson set him up for a one-timer in the slot. 2-1 Vegas.
Immediately after, Elias Pettersson nearly tied this one up but was denied by the blocker of Lehner.
Seemingly out of nowhere, there were signs of life inside the walls of Rogers Arena.
Jonathan Marchessault gave the Canucks their second power play of the game when he tripped Miller with just over 12 minutes remaining and with the Golden Knights still leading by one.
Just as the power play was about to expire, Brayden McNabb flipped the puck over the glass from his own end and gave the Canucks another power play opportunity.
The Canucks used their timeout and got back to work on the man advantage.
Folks, we had a weird one.
After William Karlsson won the faceoff for Vegas, Alec Martinez inadvertently redirected the puck between Lehner’s legs.
The goal was awarded to Bo Horvat, and just like that, we were tied at 2-2.
Unfortunately, the officials determined that the Marchessault penalty had expired when the puck crossed the line, meaning the Canucks were off the power play.
Bruce Boudreau wasn’t too happy with the decision, and the broadcast appeared to catch Boudreau saying “there’s no way that’s two seconds” to the referee.
In a complete reversal from the way they played in the opening 40 minutes, the Canucks were pouring the pressure on the Golden Knights.
The Canucks desperately needed a regulation win, and Tyler Myers had one of the best chances of the game just as time expired on the clock. Unfortunately, he put the puck high and wide.

Bo Horvat found himself on a breakaway right off the draw, but couldn’t beat Lehner after a move to the forehand.
Shea Theodore beat Demko to end it. 3-2 Vegas final. 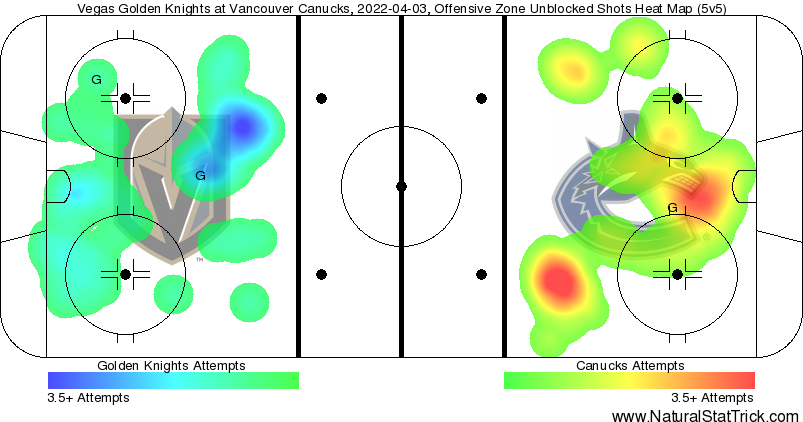 The Canucks’ performance tonight wasn’t necessarily unacceptable, but it just wasn’t good enough.
You’ve heard it all before, but the fact that this team has so much trouble just showing up to play in the first 20 minutes is embarrassing.
“I don’t know why we don’t start on time,” said Boudreau post game. “They had us 10-1 on shots in the first period. I think teams know this, and they come out flying against us.”
The stakes literally couldn’t be higher for this team, and nobody seems to realize it.
It’s no secret that the new management regime knows changes are necessary and plan to be active this offseason, and tonight was yet another stark reminder of why that’s still very much so the case, Boudreau bump and all.
Sure, they made it interesting tonight, but it took a Vegas own goal and getting absolutely pummelled through 40 minutes for this team just to show up.
Simply put, that’s just not good enough.
Uncategorized
Recent articles from David Quadrelli