CanucksArmy post game: Canucks make a game out of it despite shaky start vs. Islanders in 6-3 loss By David Quadrelli
9 months ago
The Vancouver Canucks were back in action for the second leg of a back-to-back at home less than 24 hours after beating the Arizona Coyotes by a score of 5-1 to take on the New York Islanders.
Coquitlam BC’s very own Mat Barzal had friends and family in the stands as the Bo Horvat captained Canucks looked to shut him and his Islander teammates down.
It was Jaroslav Halak vs. Ilya Sorokin in goal. It was an unusual 7:40 start time.
Let’s do this!

Here’s how the Canucks lined up in front of Halak:

Jaroslav Halak made the biggest save of the first period and then allowed an ugly one shortly thereafter.
First, Halak slid across to stop a 2-on-0. The Rogers Arena faithful rose to their feet and erupted in applause. That was great.
Then, not even a minute later, Halak misplayed a puck that was slid out in front from behind the Canucks’ goal line. Halak stopped the puck with his stick but didn’t have his pad flush to the ice. This allowed Zach Parise to poke the puck past him and make it 1-0 Canucks.
Then, Luke Schenn dropped the gloves to try to help his team find their legs.
Then a puck was shot past Halak on a deflected puck from Brock Nelson after Ryan Pulock let a shot go through traffic. 2-0 Islanders.
Then there was a shot from the point that was deflected by Islanders captain Anders Lee that made it 3-0 Islanders.
And just like that — before the game was even four minutes old — the Canucks were down by three in this one.
Timeout Canucks.
“Obviously we hung Jaro out to dry,” said captain Bo Horvat post game of his team’s start. “It’s unacceptable by us to not be ready for this game. There’s no excuses, we have to figure out a way to get it done.”
Luke Schenn called the start “inexcusable”.
The Canucks tried to settle down and keep the puck out of their own end.
Halak made a routine save, and the Bronx cheers began.
But they didn’t stop in the Canucks’ end of the ice. When they finally managed to get a second shot of their own on goal — a Vasily Podkolzin wrister from the red line about ten minutes into the game — the sarcastic cheers rained down at Rogers Arena.
Things went from bad to worse for the Canucks. After not generating anything looking even remotely dangerous-looking in the other end of the ice, Casey Cizikas redirected a hard cross-crease pass past Halak to make it 4-0 Islanders with over six minutes to go in the first.
Then there was a breakaway goal to make it 5-0 and that head coach Bruce Boudreau decided enough was enough.
“We got bailed out against Arizona by our goaltender, but tonight we gave Jaro no help,” said Boudreau, who added that he doesn’t fault Halak for the goals he allowed in — except maybe the Zach Parise goal.
Halak departed the ice to a chorus of boos, and Thatcher Demko was welcomed by the same cheers he’s heard so many times this season as he came in in relief.
Immediately, the Canucks looked like they had been given new life with their all-star goaltender in net. They were more aggressive and visibly less worried about getting caught up the ice. Almost immediately, they found the back of the net as Oliver Ekman-Larsson fired a shot through traffic to open the scoring for the Canucks to make it 5-1.

The Canucks began the second with some extended zone time and had the Islanders’ defence hemmed in their own end.
Just as the Islanders managed to vacate their zone, they got caught with too many men on the ice and the Canucks were granted the first power play of the game.
The Canucks’ first and second units both got some decent looks off but couldn’t manage to beat Sorokin, and as the penalty expired, the seemingly impossible game of catch-up continued.
Zdeno Chara took an interference penalty after stepping in front of Elias Pettersson to send the Canucks back on the man advantage.
The Canucks gave up a 2-0 chance — this time shorthanded — but Demko was up to the task and denied the opportunity as he continued to keep his team in this one as best he could.
The penalty expired and shortly after, Elias Pettersson — who told media today he finally feels like himself again — made a power move to the net and fought to put the puck past Sorokin to make it 5-2 Islanders.
And before you even had time to go refill your beverage or snack of choice, the Canucks scored AGAIN!
This time, it was Luke Schenn firing a shot from the point that beat Sorokin to make it 5-3.
The Islanders called a timeout, but the Canucks kept pressing.
The line of Elias Pettersson, Vasily Podkolzin, and Nils Höglander was phenomenal in the shift right after the Schenn goal and nearly made this a one-goal game on multiple occasions.
Truly, the Canucks looked like a different team than the one that showed up — or failed to, if we’re being honest — in the first period.
With the shot total reading 21-19 in favour of the Canucks, the teams departed to their dressing rooms to prepare for a final 20 minutes of play that it just felt like the Canucks were going to find a way to make interesting.

The Canucks came into the third with the same energy that they left the second with. They were quick and refused to make anything easy on the Islanders. Alex Chiasson had a shot on goal from in close but Sorokin was up to the challenge.
J.T. Miller was slew footed by J.G. Pageau and while he was falling, Miller’s stick caught Pageau in the face and was assessed a double minor. This meant the Canucks were shorthanded, and captain Bo Horvat was livid in his attempt to get an explanation from the officials.
The Canucks killed off the penalty and immediately cranked up the pressure on the Isles again. And again, it was Elias Pettersson leading the charge.
The Canucks kept pressing but the Islanders continued to bend but not break.
Tyler Myers blew a tire after getting his pocket picked when coming back for a puck and the Islanders capitalized to make it 6-3 with just over five minutes remaining.
The fans headed for the exits early and the Canucks lost by a final score of 6-3. 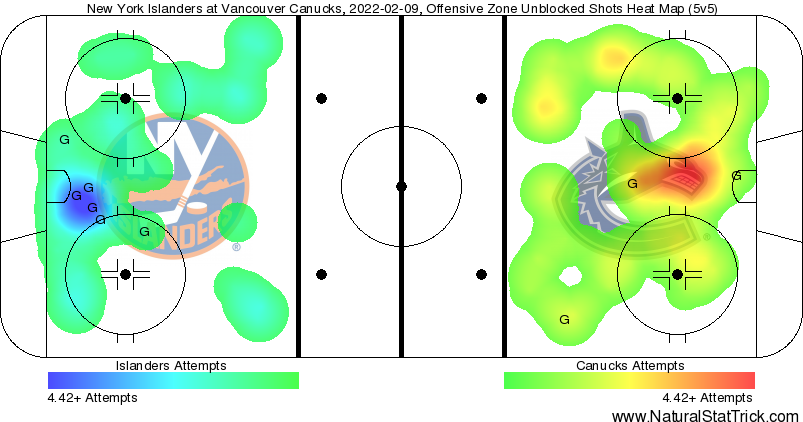 How can we not give top performer honours to Thatcher Demko in this one? He came in, calmed the storm, and gave the Canucks a fighting chance.
Oliver Ekman-Larsson and Elias Pettersson both deserve honourable mentions, but Demko was the clear-cut top performer in this one.

This was a game that the Canucks seemed out of early on, but they managed to make a game out of it, and that says a lot about them.
Sure, they didn’t win, but the Canucks team of old likely would have sat back and allowed this one to get out of hand in a hurry.
Horvat called the final two periods of play some of the best hockey the Canucks have played since Boudreau came aboard, and it’s hard to disagree with him.
Also, don’t look now, but Spencer Martin posted a shutout in Abbotsford tonight. We’ll have more coverage from that game coming to you tomorrow, but on a night where Jaroslav Halak was less than spectacular, it’s something to make note of, no doubt.
The Canucks are back in action next on Saturday, when they will do battle at home with the Maple Leafs. It’s a 4 PM start time, cause of course it is.
Uncategorized
Recent articles from David Quadrelli