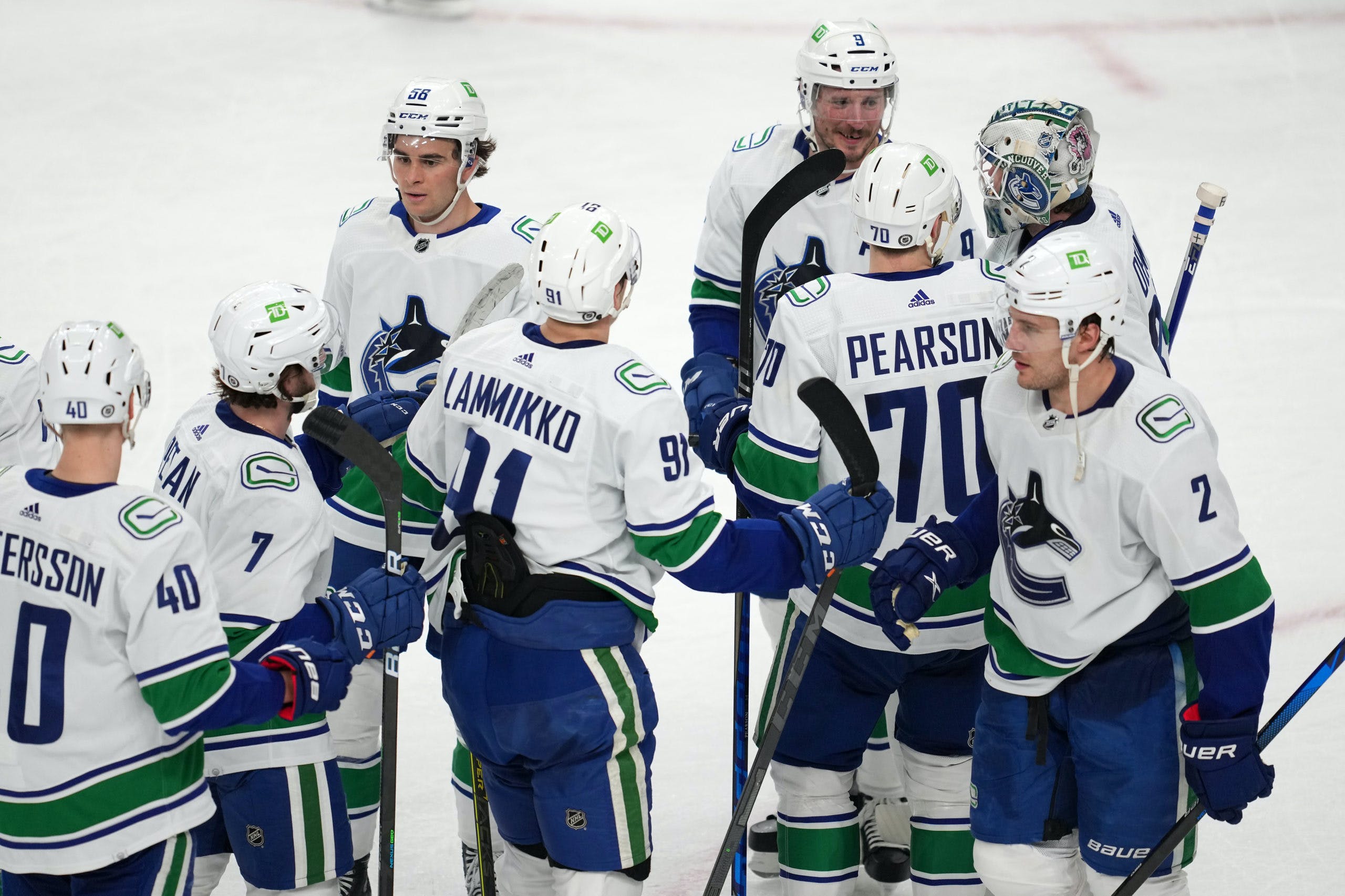 By Isabella Urbani
8 months ago
The Vancouver Canucks squared off for the second straight game against the Vegas Golden Knights in four days, with the opportunity for a little bit more than payback on the line.
Coming into tonight‘s game, the Canucks had yet to beat the Knights in regulation in the regular season in the team’s short five-year history.
And with less than a one percent chance of making the playoffs, Vancouver would have to do so without heavy lifter Quinn Hughes, who did not join the team on their two-game road trip due to illness. Forward Brock Boeser was also unavailable due to an injury suffered last game.
As so, Vancouver rolled the dice with their backend in Sin City. Bruce Boudreau stuck to his guns by going with Kyle Burroughs, who missed the last month of action due to a rib injury, instead of Jack Rathbone, who was on an emergency recall with the club. Burroughs was paired up with follow Vancouver product, Brad Hunt.
Whereas Hughes’ defensive partner, Luke Schenn skated alongside Oliver-Ekman Larsson, allowing Travis Dermott to switch to the left side after Tucker Poolman suffered another injury in his return to play.
With the stage set, let’s see if the Canucks busted out tonight or hit the jackpot.

Here’s how Vancouver fared in their latest matchup against the Knights.

Ah yes, the golden (no pun intended) formula of kicking your opponents while they’re down. Or in this case, when they are down a man.
After what’s becoming an accustomed slow start for the Canucks, Vancouver actually managed to direct the first three shots on net, and in close vicinity to goaltender Robin Lehner.
Lehner gave up a few juicy rebounds for the taking early, but the visiting Canucks were unable to capitalize on any of these chances. Instead, they drew extremely close to drawing first blood on two grade-A opportunities.
The first was from leading scorer JT Miller, who found Tanner Pearson available in his favourite low slot position for a one-timer that missed the net. By the time Vegas regained the puck, they were rushing up ice, and after a Tyler Myers pinch, Miller was forced to play defence.
You can imagine how that went.
Forced to take a penalty, Vancouver found some solace in the fact that the Knights have been rather bad with the extra man. And by bad, I am talking zero goals in their last nine games kinds of bad. While the Canucks have been on their best stretch of late on the penalty kill, only surrendering one goal in their last five.
Limiting the home team to just one shot from the outside, Vancouver’s penalty unit was able to get sticks and skates in lanes, sending pucks down the entire length of the ice.
But perhaps the best moment of the kill came when captain Bo Horvat brought the puck into the Vegas zone. Are you also getting flashbacks from the bubble?
5 on 5, the Canucks went back to work on their second scoring chance of the frame. This time from Vasily Podkolzin who corralled the puck off a battle from the boards and had Horvat open on the right side with an empty net at his mercy for a tap in. The pass was just off the mark.
And as fate had it, Jack Eichel would bury his look at the empty net after Demko denied a one-timer from the bumper, which was trickling over the line before he swatted it away with his blocker.
And his teammates, well, they watched in amazement too, of course. 1-0 Vegas.
Vegas followed up the goal with another in tight look, before Vancouver was able to turn the tides their way. But not before Eichel tried to knock Tyler Myers down for some wood.
After Elias Pettersson managed to draw a penalty, Horvat netted the equalizer and his career-high 28th goal. 1-1 Canucks.
Just 17 seconds later, Vancouver took hold of the lead after a Conor Garland takeaway was snapped home by Brad Richardson. 2-1 Canucks.
It’s just the 12th time the Canucks have scored twice in the opening frame, and oddly enough, they have done so in both of their games against the Knights.

Play got a lot tighter and scruffier to start the second. Garland was momentarily stunned after running into Hutton’s elbow. Luckily, he was no worse for wear.
Both teams exchanged chances through the first half of the period. The Canucks however, walked a much thinner line, giving up quality chances in front of Demko, while opting for shots from the point and a few odd-man rush chances themselves, including a Horvat backhander.
Vegas came ever so close to tying it up on various shots after hemming the Canucks in their own zone. Demko calmly turned the shots away, and stayed tight on his post, keeping the team unscathed.
Back the other way, Miller dished off a cross-ice feed to Elias Pettersson, who carried in the zone, and found Pearson sitting pretty in front of the net for an insurance goal. 3-1 Canucks.
Things got testy for a moment after Burroughs stepped up and nailed a Vegas player against the boards. Not liking the hit, a teammate exchanged some pleasantries with Burroughs before he went his own way.
How about we check in with Demko? Controlling his side of play, Demko made kick saves look so effortless, stoning what seemed to be the 100th shot from the slot.
With him playing a heck of a game, Vancouver was able to switch quickly to offence. A Horvat breakaway? Why not! A consecutive two-goal period? Have at it!
Ekman-Larsson got his second helper of the night after spotting a wide-open Pettersson who spun off of his check and jammed one home. 4-1 Canucks.
It might not be a star-studded season for Ekman-Larsson, but he has not failed to step up big time in Hughes’ absence.
Heading into the final twenty, the Canucks could breathe a small sigh of relief. They weren’t chasing the lead, but it’s been a while since they had to protect one. The message was clear: lock it down.

Did Pettersson post on Instagram before this game? Because he had the fourth four-point night of his career.
As a whole, the Canucks were making some fantastic optical decisions tonight. And this is not referring to the few Canucks faithful starting up the Bruce chants tonight.
Vancouver was playing tactful hockey, coupled with excellent puck management. All of their chances tonight were curated by heavy patience, especially on the fifth goal.
After losing the draw to start the power play, Alex Chiasson and Pettersson went to work on the forecheck. Chiasson came face to face with Lehner after Pettersson was able to catch a piece of Vegas defender Alec Martinez’s clearing attempt.
Instead of firing the puck into the chest of Lehner, Chiasson made the right play and feathered a pass to Pettersson waiting on the doorstep. 5-1 Canucks.
Earlier in the season, those types of plays just weren’t common for the Canucks.
But as always, a win is simply not possible without Demko leading the way, regardless of how many goals Vancouver scores.
Demko had a particular stretch of stops in quick succession after some sustained pressure by the Knights, starting with a 2 on 1 that he made a sprawling save on. Once more, making a difficult save look way too easy.
Even better was his left shoulder save made with no stick on the Vegas power play. At this rate, why not have him shut down a two-man advantage?
Not to worry, when Vegas challenged him with a cross-seam feed, he raised their bet with a shrugging shoulder save. 5-1 Canucks Final. 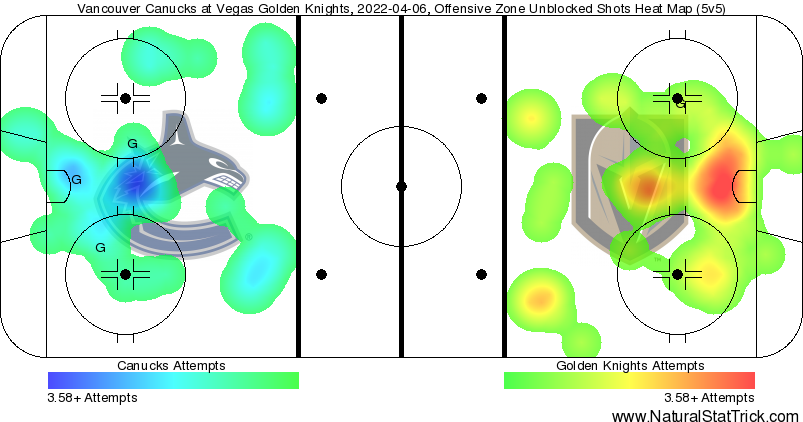 Sweet victory: the Canucks were able to exorcise their demons while competing very well without a few key players.
The Pearson-Miller-Pettersson line had a stellar game. The trio seemed to find each other no problem out there, especially Pettersson, who deked his way and kept possession of the puck on more than a few tight checks. His head was on a swivel, constantly looking for his teammates and playing with patience, purpose, and pace.
Podkolzin was another Canuck who had a great game — good enough to win him the championship belt from number four-point night himself.
After a disappointing homestand in which Vancouver only pocketed one point, today’s game demonstrated some signs of life. Despite the odds, the Canucks are still playing for a playoff spot, and that’s a nice sight to see. Plus, it never hurts to watch them make their opponents’ wild card chase that much tougher.
Vancouver will be in action once more tomorrow at 7:00 p.m. against the Arizona Coyotes before returning home for a five-game homestand, which will include one final meetup against the Knights.
Content
Matchups
Recent articles from Isabella Urbani