CanucksArmy post game: Canucks fail to convert on power play chances and lose to Flyers by a score of 2-1 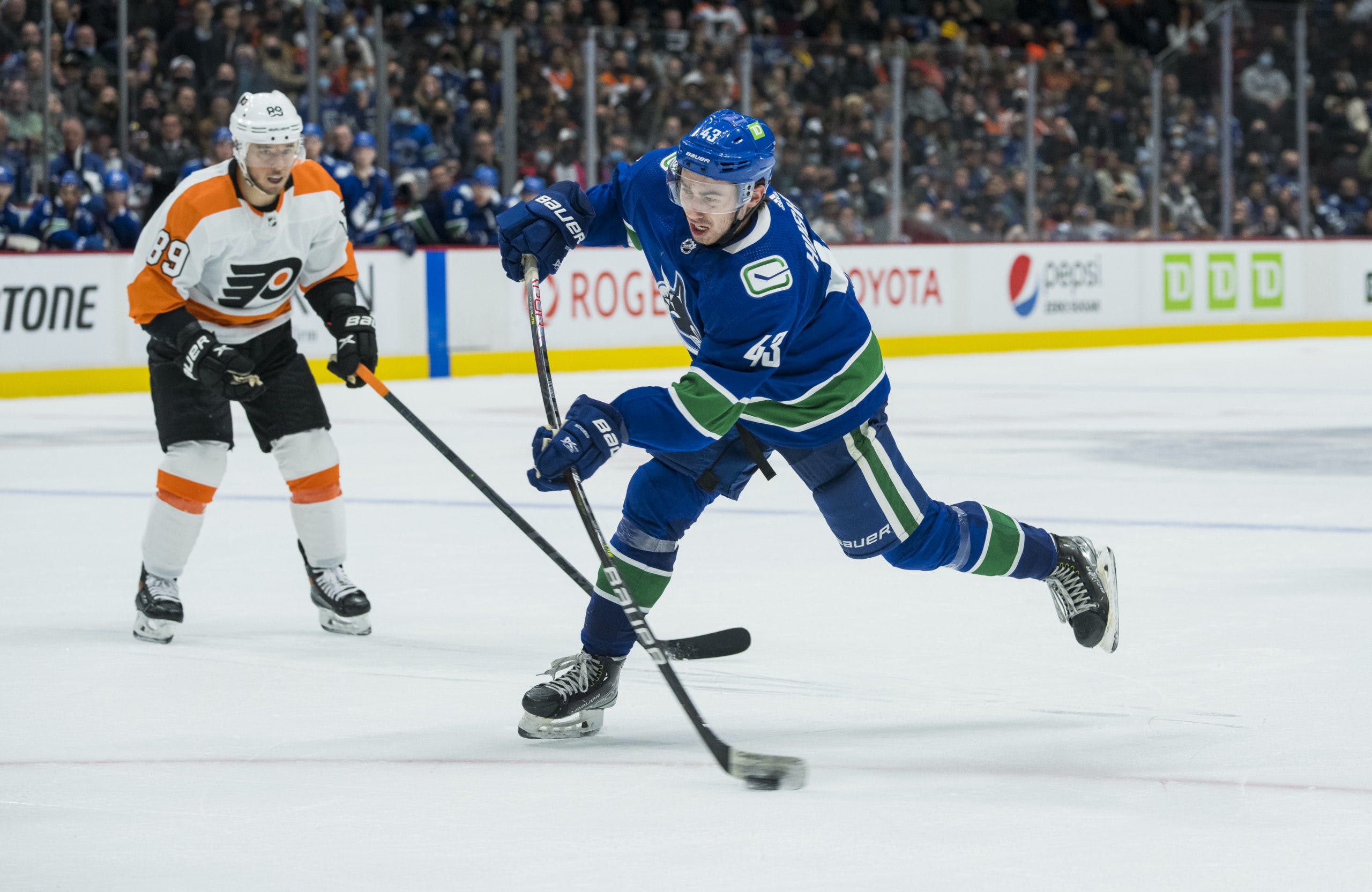 By David Quadrelli
1 year ago
The Vancouver Canucks were looking to pick up their first home win of the season and avoid falling below .500 on the season with the Philadelphia Flyers in town.

Jack Rathbone was given the night off after struggling on Tuesday night, while Jaroslav Halak started in goal for the Canucks. Vancouver native Martin Jones roamed the crease for the Flyers instead of Carter Hart, who the Canucks shelled for four goals the last time these two teams played.
Let’s do this!

Just seconds into the game, Sean Couturier beat Jaroslav Halak over the right shoulder to make it 1-0 Flyers early on.
After starting the game on their heels, the Canucks answered back just minutes after when Quinn Hughes fired a wrist shot from the point that hit the post before deflecting in off Martin Jones’ backside. 1-1.
That goal marked the Canucks’ first shot of the game, and stood as such over five minutes into the game.
Hughes took an interference penalty after Joel Farabee clamped down on Hughes’ stick and went down to the ice.
The Flyers’ power play got to work quickly, executing a nicely done set tic-tac-toe passing play that resulted in the Flyers jumping back out in front 2-1.
The Canucks didn’t generate much or have much of a response in the four minutes following the Flyers’ second goal. Tanner Pearson fired a shot off the post with a chance off the rush, but Hughes took another penalty to put the Canucks back on the penalty kill with a little under ten minutes remaining in the opening frame.
The Canucks killed off the penalty with some solid keep-away from Tyler Myers, Oliver Ekman-Larsson, and Matthew Highmore. The trio took off a good minute of the Flyers’ power play in the process.
The final notable play of the period came when Halak made a huge glove save off Claude Giroux who found himself alone right in the slot.

We had a FIGHT six minutes into the second period — nothing notable had really happened up to that point — and it featured a familiar face.
In his 10th career fight, the first nine of which came in a Vancouver Canucks uniform, Zack MacEwen dropped the gloves with former teammate Luke Schenn in a spirited bout.
MacEwen grabbed Schenn’s visor during the fight, and was assessed an unsportsmanlike penalty for his troubles. This put the Canucks onto their first power play of the game.
This power play brought a sight for Canucks fans’ sore eyes — Elias Pettersson letting a one-timer fly.
Sure, it was saved by Martin Jones, but with how things have been going for Pettersson to start the new season, just seeing him let go of a one-timer once again was like seeing a light sprinkling of rain during a drought.
The Canucks showed a lot more urgency on this man-advantage, and had a plethora of chances as a result. Conor Garland nearly tied the game when he let go of a snap shot from the slot, but the left leg of Jones had other ideas.
At the halfway point of the period, the shots were 18-12 in favour of the Flyers.
Rasmus Ristolainen took a cross-checking penalty with 9:26 remaining in the second to send the Canucks right back to the power play.
The Canucks executed a nice set play to Bo Horvat in the slot, but once again, Martin Jones stood tall and kept the puck out.
As the power play went by the wayside, the Canucks kept pressing.
With 6:32 remaining in the second, Justin Bailey deflected a Tyler Myers point shot on Jones, and the rebound was there for Juho Lammikko, who tried to pounce on the loose puck. Unfortunately for the Canucks, a Flyers defenceman got there first to clear the puck out of harm’s way.
Bailey had another solid chance with just over three minutes remaining, but that was the Canucks’ final real scoring chance of the period.
Horvat took an interference penalty that he vehemently disagreed with with just 2:59 remaining in the period, but the Canucks killed off the penalty to keep this one at 2-1 heading into the third and final frame.

Seemingly before the puck had even dropped, Nils Höglander took a high sticking penalty to send the Flyers back to the man advantage.
The only chance for the next two minutes was a short-handed bid from Juho Lammikko, as the Flyers struggled to get a quality look at Jaro Halak.
With 15 minutes remaining in the third, the Canucks had evened up the shot count to 21-21.
Oskar Lindblom took a holding penalty with 14:53 remaining and the Canucks got back to work on the power play.
Once again, they just couldn’t solve Jones and the Flyers’ penalty-killing personnel.
James Van-Riemsdyk took a tripping penalty on OEL with 10:26 remaining, giving the Canucks yet another chance to tie this one up.
About a minute into the power play, Elias Pettersson took a holding penalty to take the Canucks off the man advantage.
In the subsequent 4-on-4 action, Brock Boeser created some quality chances thanks to some help from Quinn Hughes, but again, Jones was up to the challenge each time.
Late in the game, with the Canucks pressing and at 6-on-4 with their net empty and a Flyer in the box, Boeser got a glorious chance off on Jones, who saved it with his head to put a bow on a solid start for the Vancouver native.
The Canucks struggled to get set up after that, and the game ended by a final score of 2-1. 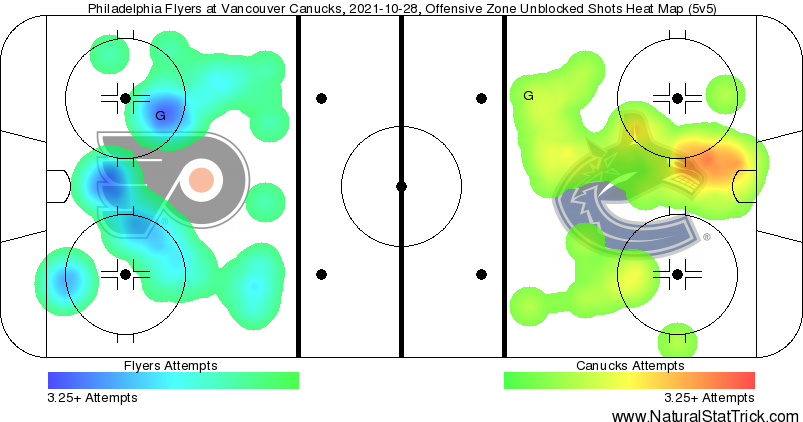 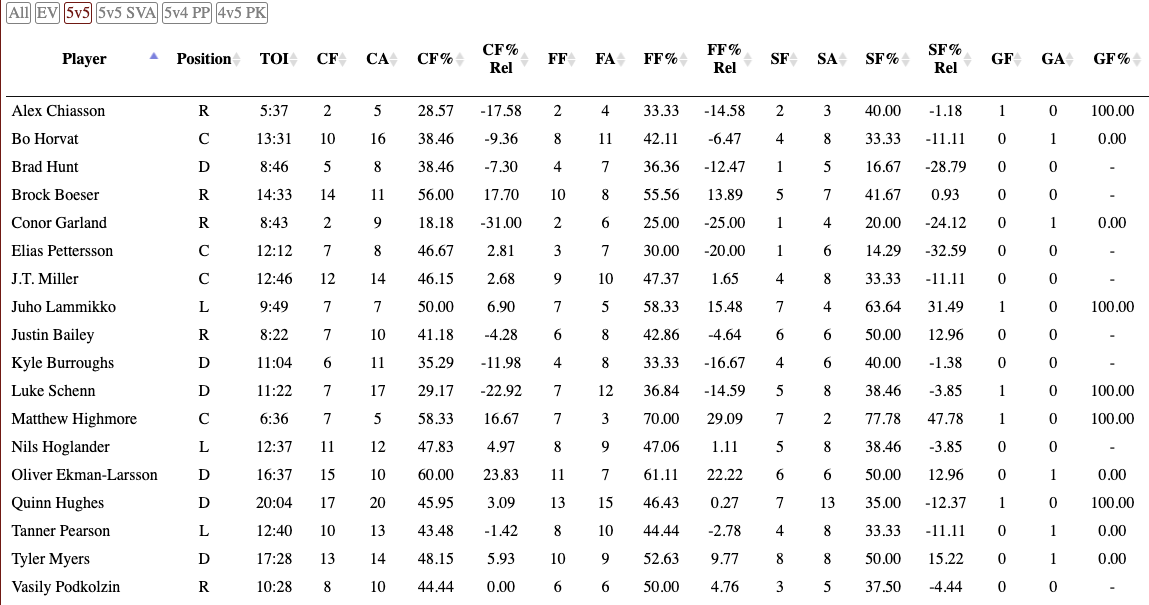 The Canucks now drop below .500 and are 0-2 through their first two games back at home at Rogers Arena.
Matthew Highmore exited the game and did not return for the rest of the third with an undisclosed injury. With the Canucks already thin on bottom-six forwards, this will be something to watch closely.
At some point, the Canucks’ power play needs to start converting on their opportunities.
The Flyers were basically asking them to tie this one up, and the Canucks power play personnel couldn’t get the job done.
Going 0-for-5 just isn’t good enough.
The Canucks are back in action on Saturday night when the Edmonton Oilers will be in town for a 7 PM puck drop from Rogers Arena.
Uncategorized
Recent articles from David Quadrelli