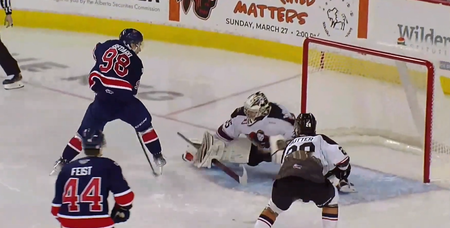 By David Quadrelli
9 months ago
You’ve likely heard the name Connor Bedard before.
If you haven’t, you’d better get used to it, because this kid can flat out play.
The early favourite to go first overall in the 2023 NHL Entry Draft, Bedard is the first player in WHL and seventh on the list of total CHL players to have been granted exceptional status. That list includes the likes of Connor McDavid, John Tavares, and Aaron Ekblad, who have all gone on to star in the NHL. The most recent exceptional player prior to Bedard is forward Shane Wright, the consensus first overall pick in the 2022 NHL Draft.
Bedard, a native of North Vancouver, grew up a Canucks fan and said in a recent interview that his favourite Canuck is Tyler Motte.
“Can’t go wrong with the Sedins,” Bedard said when asked who is favourite Canuck of all time was. “Growing up, when I was eight or nine, we were really good. I was at the game where Bieksa sent them to the Stanley Cup Final against San Jose. But my favourite Canuck right now is probably Motte.”
Bedard channelled his inner Tyler Motte and scored this ridiculously nice goal yesterday in a game against the Calgary Hitmen.
A reminder — this kid is just 16 years old, folks.
After seeing the goal, Motte posted the highlight to his Instagram story with the “sick” emoji — the same reaction Bedard posted to his Instagram story back when Motte scored his between-the-legs goal.
Uncategorized
Recent articles from David Quadrelli