As the Canucks find themselves at a similar crossroads, what if the Avalanche extended Matt Duchene instead of trading him? 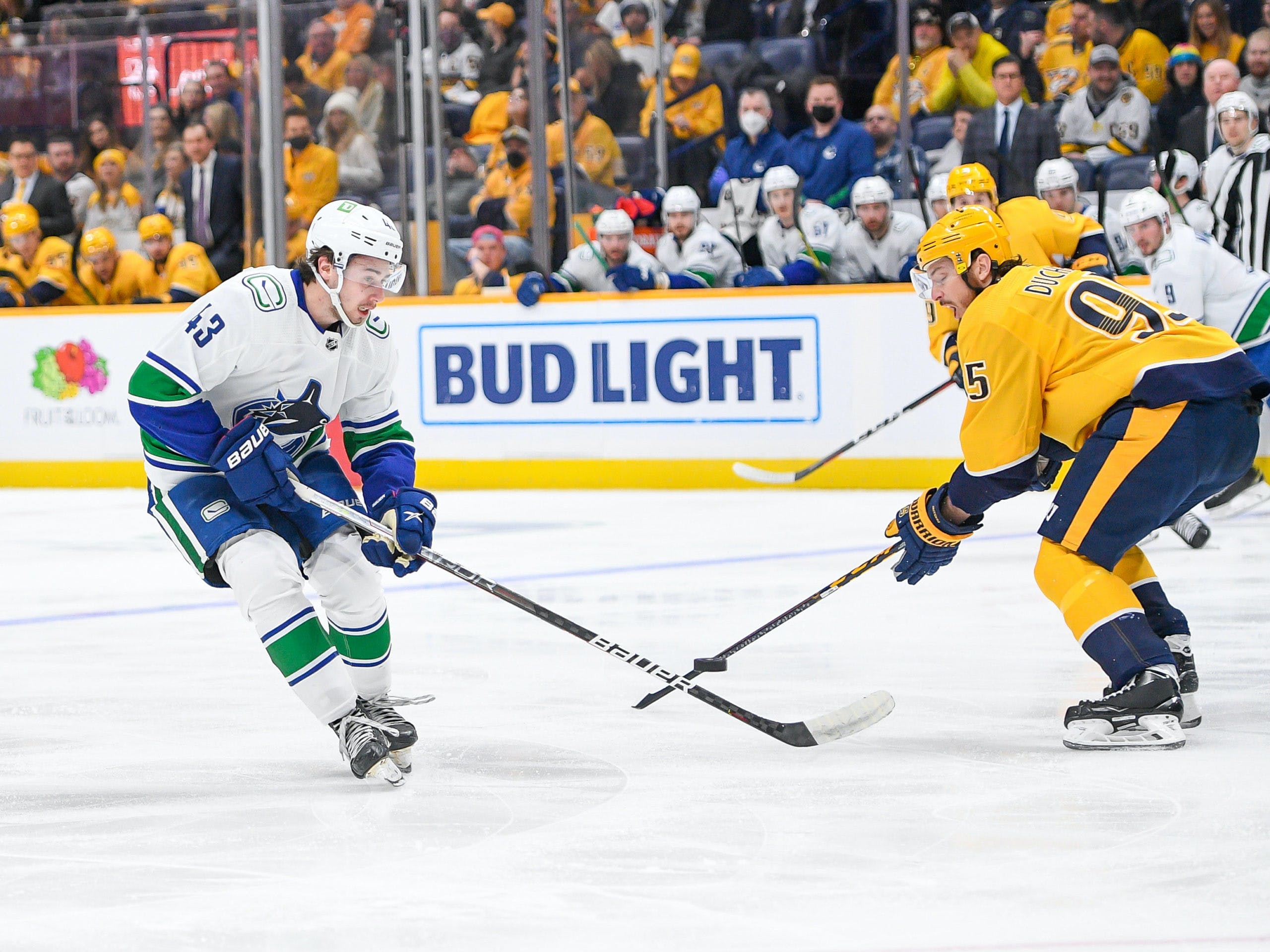 By Bill Huan
6 months ago
Welcome back to our “what-if?” series, the return of which has been anticipated as much as upcoming Marvel shows.
Jokes aside, this will be a one-off article that’ll explore what might’ve happened had the Avalanche extended Matt Duchene instead of trading him. With the Canucks being in a similar position with J.T. Miller, this hypothetical will hopefully show the delicate balance that management needs to make with their upcoming UFA.
The main difference between Duchene and Miller is that the former had an extra season left on his deal and wasn’t traded in his contract year. Regardless, there are many parallels to be drawn between the two, especially considering the age difference between them and the core group of that Avalanche squad and the current Canucks.
So, without further ado, let’s jump back into the multiverse.

On November 5th, 2017, Duchene was traded to the Senators in a three-team deal that saw Nashville receive Kyle Turris while Colorado added the following seven(!) assets:
At the time, the Senators were coming off a game seven overtime loss to the Penguins in the Eastern Conference Finals while the Predators were defeated in the Cup Finals by that same Pittsburgh club. Both Ottawa and Nashville viewed themselves as contenders who needed to get over the hump, and the remainder of the 2017-18 season couldn’t have been more different between the two sides.
The Predators went on to win their first and only President’s Trophy in franchise history before losing in seven games to Winnipeg in round two. On the other hand, the Senators completely fell apart and finished second last in the entire league.
Now, this is where the fun begins — for Colorado, at least.
The first-round pick that Ottawa traded was top 10 protected for the 2018 draft, and they had the option of either keeping it or sending an unprotected 2019 first-rounder to the Avalanche instead. After landing the fourth overall selection, the Senators chose to keep their original pick and selected Brady Tkachuk, resulting in Colorado receiving their unprotected 2019 first-rounder.
Infamously, Ottawa had an even worse season in 2018-19 by finishing dead last, giving the Avalanche the fourth overall pick that turned into Bowen Byram.
The rest is history.
Byram and Girard both developed into bonafide top-four defencemen who helped Colorado become a perennial contender and the eventual cup champions. Another trickle-down effect that’s often forgotten is the impact that the Duchene deal had on Nathan MacKinnon: it’s not a coincidence that he turned into an MVP candidate the same season in which the trade happened.
So, it’s safe to say that Duchene’s departure played a vital role in the Avalanche hoisting the cup. But what if he stayed in Denver? As you’ll soon see, the team still becomes very good, but their cup drought definitely wouldn’t have been snapped.

After the trade, reports surfaced that Duchene had asked out in the winter of 2016. In this timeline, though, he sees the potential in MacKinnon and other young players and re-signs in Denver for six years with a $7 million AAV that kicks in during the 2019-20 campaign (his age 28-29 season).
According to Evolving-Hockey, Duchene contributed 1.3 Wins Above Replacement (WAR) in Ottawa during the year he was traded while MacKinnon’s WAR was an incredible 3.9 — the most of his career still to this day. With Duchene staying in Colorado, though, neither of them is given the freedom to play to their full potential, resulting in them losing one win during the regular season.
This small change drastically changes the Avalanche’s season, as they miss the playoffs by a single point and land the 14th pick in the 2018 draft. Without Girard on their team, Colorado has a need for young defencemen and selects Ty Smith.

Girard’s absence leaves a hole in Colorado’s defence, and Joe Sakic addresses that issue by signing Calvin de Haan to a four-year, $19 million ($4.75 million AAV) deal in the off-season.
More importantly, this is the year in which MacKinnon announces his arrival as a full-fledged superstar. As a result, Duchene gets bumped down the lineup and doesn’t have the career year that he did in Ottawa, which is why he contributes 2.3 WAR instead of the 3.3 he originally put up as a Senator. These changes add a single point to the Avalanche’s overall total but don’t change the standings, which means that they’re still ousted by San Jose in the Western Conference Semis.
The biggest change, however, is that Colorado can’t draft Byram now that they don’t have Ottawa’s unprotected first. They still select Alex Newhook with their own pick, but Byram’s absence will be greatly felt in a few years.

This is when Duchene’s presence, or more accurately, his contract, starts becoming an issue for Colorado. The Avalanche originally had over $5 million in cap space without him, but his new $7 million deal means that Sakic needs to make some tough decisions.
Firstly, there’s no need to acquire Nazem Kadri from Toronto anymore since they already have Duchene as their second-line centre. This also means that Alex Kerfoot stays put in Colorado and signs the same four-year, $14 million ($3.5 million AAV) as he did with the Leafs.
With their cap space limited, though, Tyson Barrie is still dealt to Toronto, this time for their 2020 first-round pick. The ripple effect of having Duchene’s contract prevents Colorado from trading for Andre Burakovsky and Vladislav Namestnikov, causing them to lose three points in the standings.
However, the standings remain unchanged, and the Avalanche still get eliminated by the Stars in round two.

Originally, Sakic acquired two key players during the 2020 offseason: Devon Toews and Brandon Saad. Unfortunately, he only has the option of choosing one in this scenario and ultimately decides to go with Saad due to Colorado’s dearth of top-six wingers without Burakovsky.
Though Saad added a respectable 1.1 wins, it’s a far cry from the 2.6 that Toews contributed in reality. Not having Byram also makes their blueline a lot less intimidating both in the present and future, although Ty Smith actually had a better rookie season.
All these changes result in the Avalanche losing five extra games and accumulating 10 fewer points, causing them to finish 11th in the standings instead of winning the President’s Trophy. More importantly, they’re now third in the West Division and play Minnesota in round one rather than St. Louis.
Cale Makar still establishes himself as one of the league’s top defencemen, but without Toews by his side, the rest of Colorado’s blueline struggles as they lose in the first round and goes into the offseason with plenty of uncertainty.

Surprisingly, the Avalanche actually has a bit of cap room in the summer of 2021. This shouldn’t be seen as a good sign, though, since the additional financial flexibility is due to the absences of four players (Kadri, Burakovsky, Girard and Toews) who are good enough to be core pieces on a contender (like the real-life Avalanche!)
Sakic ultimately decides to use the extra cap space by re-signing Philipp Grubauer to a six-year deal worth $33 million ($5.5 million AAV) and thus passes up the opportunity of trading for Darcy Kuemper. Much of Grubauer’s struggles last season can be attributed to playing behind a poor Kraken team, but even if we give him the benefit of the doubt and assume he remains at his 2020-21 level (2.5 WAR as opposed to -3.8 WAR in 2021-22), it’s still a far cry from what Kuemper contributed.
Taking everything into account, Colorado loses a whopping nine additional games and finishes with 18 fewer points, plummeting them all the way down to 12th in the league and just four points clear of the postseason cutoff. In the playoffs, they manage to upset the Blues before losing again to Minnesota in round two.

Not only did Duchene’s extension lead to Colorado missing out on a cup, but it also prevented the team from ever becoming perennial contenders. His presence handicapped the Avalanche’s future too, as they have a much older team with a blueline that could be called “Makar and friends.”
The biggest takeaway is that Duchene didn’t prevent Colorado from being a good team, but it did cap their ceiling and make it much harder for them to be truly elite. It also shows that a lot of luck is involved in constructing a contender; a justifiable decision like trading for Saad instead of Toews (remember, no one expected him to be this good) might’ve made all the difference between a good vs great team, and it’s very possible that Grubauer would’ve stayed in Colorado long-term if they had slightly more cap space last offseason.
As mentioned before, this isn’t a perfect comparison to Miller’s situation since he’s in a contract year and is already older than Duchene was when the latter got traded. However, it does show that management should only extend him if they can (1) confidently map out what Bo Horvat and the team’s other core players might command on their next contracts and (2) are convinced that Miller’s deal won’t impede the club from adding supporting pieces around them.
Right now, I don’t see how such a scenario is possible since the current iteration of the Canucks is littered with bad contracts that Colorado didn’t have when they traded Duchene. And if the Avalanche was only able to turn into a good team had they kept him, is it realistic to expect the Canucks to surpass that and become elite if they still need to deal with inefficient money after re-signing Miller?
Ultimately, a trade still seems like the most logical route, but regardless of what happens, Jim Rutherford and company need to stand firm on their final decision and chart a definitive path for the future. Canucks fans are all too used to indecisive regimes that took one step forward and two steps back, and it’s time for that to change.
All WAR stats courtesy of Evolving-Hockey.
Uncategorized
Recent articles from Bill Huan