Canucks Prospects Rankings #7: Aidan McDonough’s shot is ready for pro hockey and he is rounding out the rest of his game in the NCAA 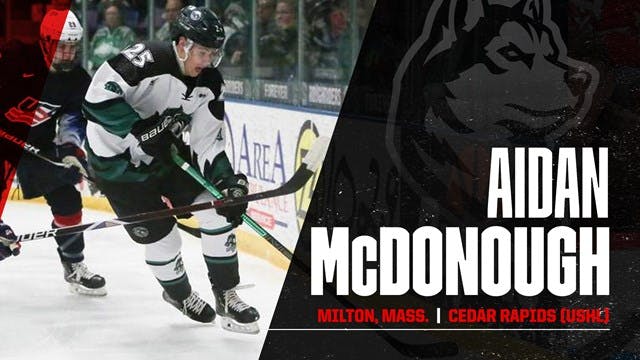 By Faber
1 year ago
Moving along with the top-10 of our Canucks prospect rankings, we arrive at the big goal-scoring winger Aidan McDonough.
The 21-year-old 2019 seventh-round pick took a big leap this season at Northeastern University. He lost his Hobey Baker finalist linemate Tyler Madden and was relied upon to be the offensive driver on his line while being the go-to shooter on the power play.
This past season, McDonough did step up to be a more effective player during his sophomore season in the NCAA. He scored 10 goals and added 10 assists in 21 games finishing just a point shy of being a point per game player in his second college season. McDonough won the Hockey East division’s PNC Bank Three Stars Award, an award that commemorates dominant play over the course of the season.
McDonough played on the Huskies’ first line while having four three-point games this season and averaging over two and a half shots per game. He had 30 shots on net in his first 10 games and this is a good thing to see because we are about to talk about his excellent shot.
Aside from being at least 6’2″ and 200 lbs, the first thing that pops off the screen from McDonough is his shot. It’s by far the best part of his game. He has an excellent release and is accurate on the one-timer from the right side on the power play. He scored a hat trick of all power play goals on February 12th against New Hampshire. If he is given enough space, he doesn’t miss on that shot.
McDonough is aware that his shot is the best part of his game and he says a big reason for that is how much time he spends working on his shot in the offseason. “I have a spot in my backyard with a net and some turf where I am able to work on my shot,” said McDonough. “It’s something that I take pride in and I really don’t see it as work. I kind of see that as fun.”
He regularly is a shooter at multiple goalie camps in the offseason. He is constantly working on his shot and though this last offseason, he focused on improving his skating he says that he works on shooting every single day.
Being a power play scorer is great, but McDonough wanted to become more effective at creating offence at even-strength this season. He was consistently putting up points for his team and even earned Hockey East player of the month for February. He finished the season with 12 points in his final eight games. Here’s a look at his game-by-game stats for the Huskies’ 21-game season. 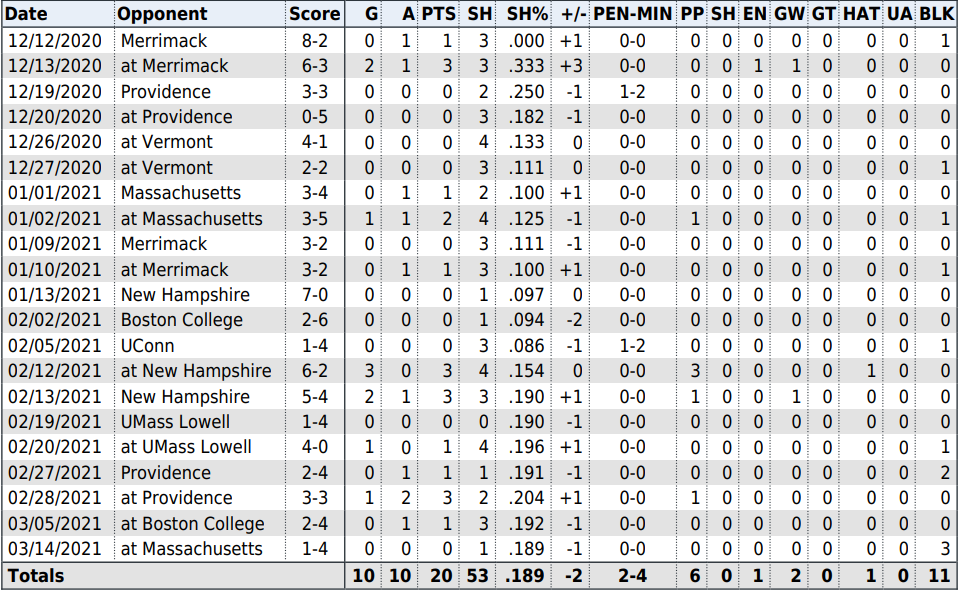 Another positive for McDonough is his improved skating. At times last year, it felt like he was trying to find open ice for Tyler Madden to pass the puck to. This year, McDonough took the initiative to take pucks to the net with his big body and his foot speed looks to have sped up from last season. A lot of his moves this year came from the added confidence of being one of the best freshmen scorers last year and he took that confidence into this season as he evolved to play a bigger role for the Huskies.
He was also excellent in the shootouts this season.
McDonough came in at number nine on our CanucksArmy November rankings. Since then, he went on to have a strong developmental year in the NCAA and will return to Northeastern for his junior season to play alongside a young Huskies team that will likely be a strong contender to be one of the best men’s hockey programs in the nation for the 2021-22 season.
Next season will be another big test for McDonough. He is going to be one of the team’s leaders next season as he grew into that role this year with his performance on and off the ice. McDonough is a great kid off the ice and works hard in the classroom as well. He has taken summer school classes both of the last two years at Northeastern to get ahead of his studies.
The thing that I would like to see next season is a focus on being more physical. He possesses a big body and can throw it around when he wants to. It feels like at times he was a bit of a perimeter player who searched for open-ice more than loose pucks. There was definitely an improvement from his freshman year to this past season but there is still a lot of room for growth if he wants to make the push for the NHL.
If McDonough continues to develop at this same level, his ceiling is a third-line winger who steps in on the second power play unit and rips shots like Mike Hoffman has done for so many years. He’s got such a hard and accurate shot that all of his teammates want to set him up to get it off.
Adding another step to his skating will be huge as well. He was a late-bloomer for his growth spree and looks like he could tighten a few things up with his skating stride to generate more power from each push. In a similar way to Jonah Gadjovich, it looked like McDonough had improved on making decisions quicker and reacting to pucks with half a second less thinking before making a play. That type of skill comes from confidence and work in the video room during the offseason.
Like a lot of these young prospects, next season will be a real sink or swim year for McDonough. He has the scoring potential to have his name around the Hobey Baker conversation and if he were to do that in his junior year, the Canucks will likely be ringing his phone as his 2021-22 NCAA season comes to an end.
My feeling is that he may return for his senior year as well so we may have to wait two more seasons before seeing McDonough make his professional debut. This timeline gives him a lot of space to improve on his weaknesses while fine-tuning his shot for better goalies in pro hockey.
In conclusion, Aidan McDonough is a large winger who has a bomb of a shot and the smarts off the ice to know what he needs to work on to raise his overall game. I wouldn’t worry about him wanting to sign elsewhere after his senior season as one of his childhood friends Jack Rathbone will be on the Canucks’ NHL roster at that time and these two often communicate about their situations in the Canucks organization.
We will continue to follow McDonough and his brilliant shot as he grows through his NCAA career.
See you tomorrow for #6 on my list.
Uncategorized
Recent articles from Faber