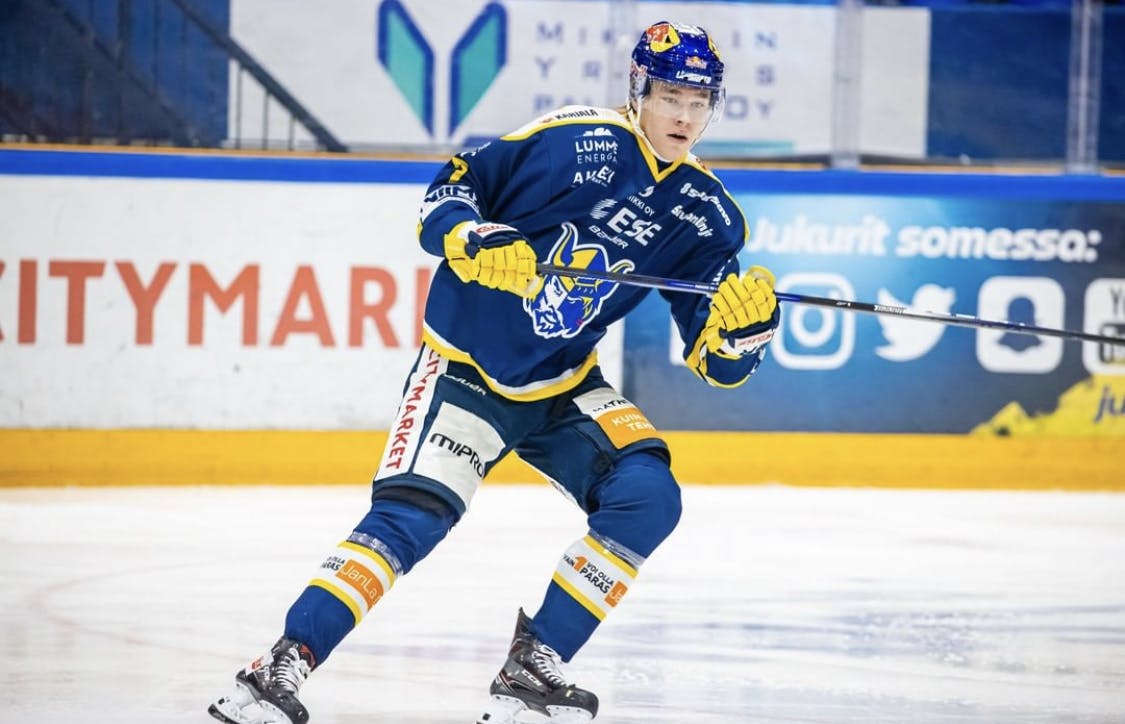 By Faber
3 months ago
The World Junior Championship is a short tournament that doesn’t necessarily tell you everything about a U20 player.
You can see a player showcase their talent on one shift and then be unable to make simple plays the next time they hop over the bench. The combination of new teammates and coaches mixed with the age range of the players in this tournament makes it some of the most exciting hockey to watch.
One of the most exciting players for Finland was Canucks prospect Joni Jurmo.
And he was a perfect example of a player who showcased his talent but also had the flaws in his game broadcasted to the world.
We saw a lot from Jurmo and it was a lot of what we have been talking about for a long time when it comes to the Canucks’ top draft pick from the 2020 NHL Entry Draft.
For the record, Jurmo is a left-shot defenceman who stands at 6’4″, and comes in around 200 pounds. He turned 20 on April 19th of this year and is slated to head back to the Finnish Liiga this fall to play with Jukurit.

After watching live and then going back to review, there’s clearly one massive takeaway from Jurmo’s performance at the World Juniors.
When Jurmo is given time and enough space, he is excellent at breaking out the puck on his own by relying on his excellent skating ability. He was bigger, stronger, and faster than most of the players in this tournament and he used that to his advantage when it came to breaking out the puck.
Here’s a quick little example of him using his skating ability to evade defenders and get the puck out of his zone.
I even added a circle indicator as per request from the comments section!
It’s clear that Jurmo’s skating is what he leans on and it showed well in this tournament. He received high praise for his work with the puck on his stick and his ability to break the puck out with his skating.
The tape tells the story. Jurmo clearly relies on his speed and agility and when you move the way he does, you should constantly be looking to skate the puck up ice. His raw talent has never been questioned but the worry in his game is if he can get away with the reliance on his skating while his decision-making remains a work in progress.
At this tournament, he is able to skate around most forecheckers and be fast enough to evade them. When he plays in Liiga, he’s playing against pros and though he has a flash or two of brilliance in a game, he isn’t converting his breakouts at the same rate as he was at the WJC.

The biggest takeaway was also the most positive takeaway as Jurmo’s skating ability was the most impressive thing we saw from him at the WJC. Along with his skating, there were plenty of breakout passes that stretched the neutral zone and quickly transitioned Finland into the attacking third of the ice.
We saw glimpses of Jurmo walking the blue line and being able to get around forecheckers before scanning the offensive zone for the best scoring chance to develop off of his movement. This confidence in the offensive zone is another positive takeaway for us as we believe that the tournament can help Jurmo get back to playing to his strengths instead of worrying when on the ice in Finland’s top men’s league.
Here’s an example of Jurmo walking the line around Connor Bedard, and then attacking the net.
On top of the offensive side of things, Jurmo impressed us with his physicality in this tournament. At 6’4″, 200 lbs, he was a lot bigger and more physically developed than the rest of the field and he used that to his advantage. During board battles, you could see Jurmo keeping an active stick on his opposition and using his free hands to push on the player. This helped him fish out pucks from a 50-50 battle and the hope is that he continues to get stronger and can show that type of strength against men in Liiga over the next two seasons.

Through all the breakouts and slick skating strides, there were at least a handful of mental mistakes from Jurmo during the World Juniors.
It began early with a tough start to the tournament that saw him benched for 14 minutes in Finland’s first game. Throughout the tournament, though there was more good than bad, Jurmo did have some brainfarts that led to turnovers.
The good thing was that the strong skating breakouts and stretch passes were much more common for Jurmo. The hope is that he can carry some of the confidence into Liiga after seeing what worked well for him at this tournament.
We knew that there would be decision-making mistakes from Jurmo at this tournament, but all in all, he was able to look better than we thought he would and also made fewer mistakes than we expected.

First and foremost, it was very good for Jurmo to just be able to play in the tournament. He wasn’t on the roster for the scheduled December running of the World Juniors and he made a positive impact on team Finland in every game that he played. We were impressed by his ability to skate the puck out of danger and hope that he can continue to play with the confidence that he showed in this U20 tournament.
This tournament also marks the graduation of Jurmo from being a junior player. As we mentioned earlier in this article, Jurmo turned 20 in April and will no longer be able to attend any of Finland’s junior hockey events. Jurmo played last season in Liiga but really fell off in the second half of the season to a point where he was consistently playing under 10 minutes a night for Jukurit.
Now, with the confidence of his strong play at the World Juniors, we are hoping to see Jurmo earn a top-four role in Finland and be able to consistently utilize instead of relying on his strengths. There’s still a long road of development for Jurmo before he is good enough to be a pro in North America but this tournament did show that he has some tools that look like they can transition to a league like the AHL or potentially even the NHL if he can really clean up the weaker parts of his game.
This was a good couple of weeks for Jurmo and sets us up to be more invested in what he does in Liiga as a 20-year-old.
Jurmo’s regular season begins on October 14th and will conclude on March 11th. We are hoping to see a player who continues to improve his decision-making when it comes to passes in his own end or through the neutral zone, as well as continuing to be confident with his skating on breakouts.
We will be watching him closely this season to see if his development continues and if we should begin to establish an estimated time of arrival for him to come to the AHL.
Content
Recent articles from Faber