‘They are legends’: Canucks prospect Arshdeep Bains talks WHL season and looking forward to working with the Sedins 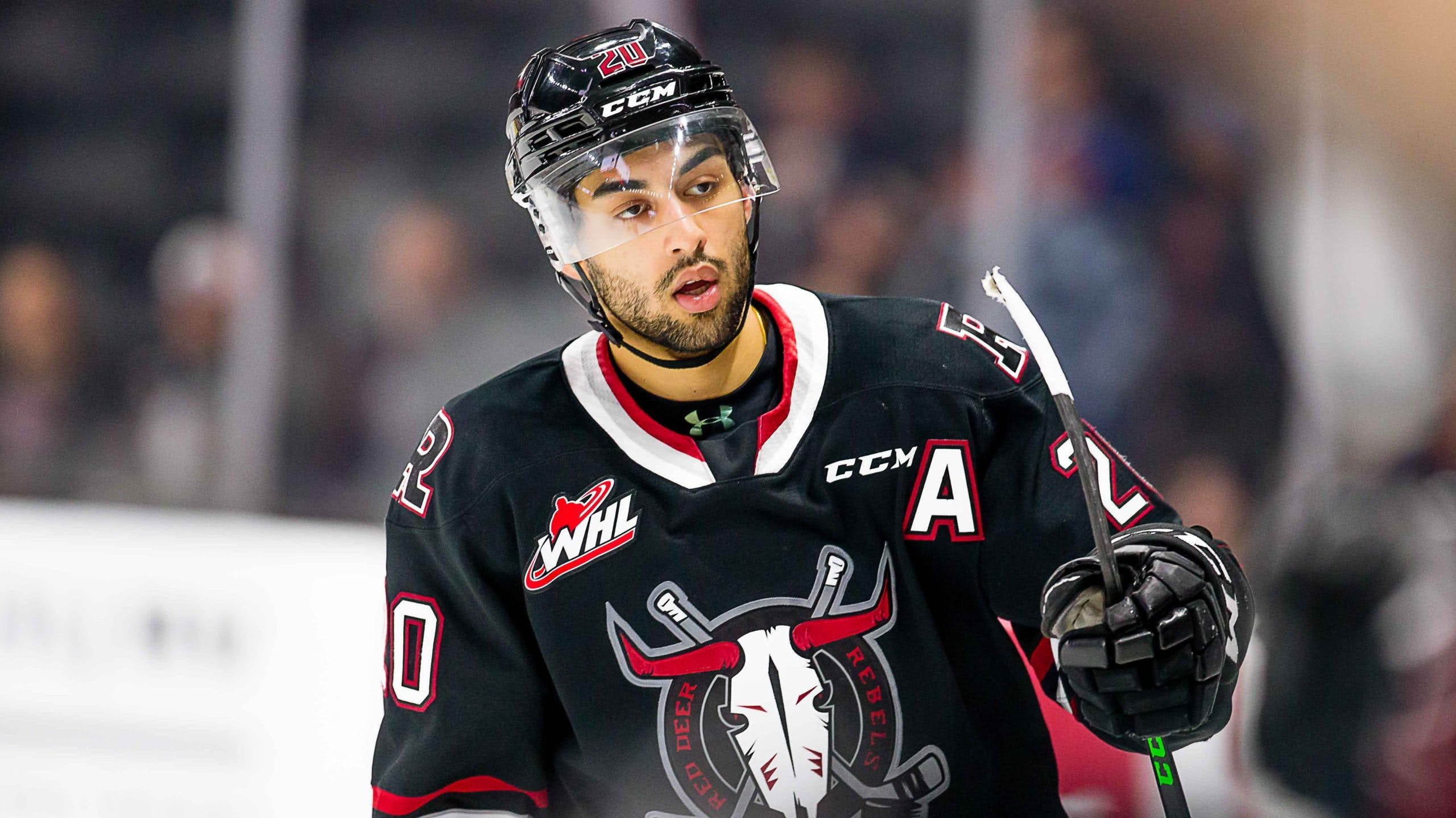 By Faber
7 months ago
Surrey native Arshdeep Bains was a Canucks fan from birth and has evolved into a prospect in their organization over his young hockey career.
After working his way onto the Red Deer Rebels team in 2017, Bains ended up playing five seasons with the Rebels. He finished this past season as the WHL’s leading scorer with 43 goals and 69 assists for a total of 112 points in 68 games. His childhood dream is now coming to fruition as the Vancouver Canucks signed him to an entry-level contract back in mid-March.
Bains has worked for everything he’s earned. Nothing has come easy to the 21-year-old.
“He wasn’t a drafted player in the WHL but he had a pretty good camp,” said Rebels General Manager Brent Sutter when asked about his first impressions of Bains. “We just started putting more responsibility on his shoulders as he got older. He certainly took a huge step and everything he’s earned — he’s worked for. I’m really happy for him because he comes from an awesome family, he’s an awesome young man, and he’s worked hard to get to where he is for sure. I give him full marks for his work ethic.”
Sutter saw Bains grow over his five years with the Rebels but sent Bains back to the U18 British Columbia Elite Hockey League after that 2017 Rebels training camp. Bains went back to the BCEHL and was tearing the league up. He was leading the league in scoring and averaging 2.55 points per game through 22 games. That 2017-18 season of the BCEHL featured four players who were later drafted to the NHL. Bains outscored Justin Sourdif (FLA) Gage Concalves (TBL), Jack Finley (TBL), and Ethan Bowen (ANA) before Sutter had to make a move.
At the time, Sutter was the head coach of the Rebels and made a trip to BC so that he could go watch Bains play. He watched one game and thought that he saw enough. Bains was a member of the Rebels by the end of the week and played 40 games with the club for the remainder of the 2017-18 season.
He improved in each of his five WHL seasons and because of his work ethic and commitment to the game, he ultimately worked his way to a spot that earned him an NHL contract.
Bains was the latest guest on the Canucks Conversation podcast. He spoke about how he felt his season went as he finished the year as the WHL’s leading scorer.
“I didn’t really even think about points or anything like that,” said Bains. “Goal scoring was just starting to come to me and it was pretty fun. I think of a time when I had four points in just one period. It was just the craziest thing. I just felt like every shift, I was going out there and having a chance to score. I got four in that period, and five in that game. So, that was probably the best game of my career. Stuff like that was pretty cool to have.”
Growing up a Canucks fan, Bains told some stories about hopping on the Skytrain and rolling into Rogers Arena saying that it, “felt like a movie”. Bains said that he was still young at the time of the 2011 Stanley Cup run and was a big fan of Ryan Kesler. Kesler was the reason why Bains chose to wear the number 17 during his childhood. Bains was also a huge fan of the Sedins and thinks that it’s pretty surreal that they are now going to be his development coaches.
“I think that it’s great for all the players,” said Bains when asked about working with the Sedins in Abbotsford next season. “They are legends, not even just Vancouver Canucks fans but fans all around the NHL see how great the Sedins are and how they were two of the greatest players ever. [The fact] that they’re going to come to help out with the American League team and NHL and just be all over [development] is great for everybody — it’s super exciting.”
Bains doesn’t necessarily have goals for next season but he wants to make a strong impression at this summer’s development camp and then build on that into his AHL debut this fall. He expects to see 30 or so friends and family at the Abbotsford Canucks’ home-opener but will have his biggest fan cheering from home. Bains said that his grandma is his biggest fan and watches all of his games on her television.
This fall, grandma Bains will be rooting extra hard when her grandson finally gets a chance to throw on the blue and green and represent his hometown organization at the professional level.
You can listen to our full interview with Bains by clicking here.
Uncategorized
Recent articles from Faber